Olaf Bongwald has quite a car collection. “I have both old and current models of Porsche and Daimler,” he says. And like many enthusiasts, he knows his collection inside out. Except ‘inside out’ for Olaf doesn’t simply mean being able to list the name and make of every car he owns; for him, the phrase has more literal connotations.

As CEO of Finland-based automotive service Valmet Automotive, which handles contract manufacturing for renowned car brands as a significant segment of its business, he has had a hand in building many of the vehicles in his garage.

“It’s wonderful,” he says of his job. “Porsche and Daimler – the parent company of Mercedes-Benz – are the two brands I love the most, and these are the two brands of cars we have been building at Valmet Automotive for the past 20 years.”

Olaf’s first foray into the automotive industry started with VDO and then Magna International, a leading automotive supplier based in Ontario, Canada. He stayed there for almost 18 years, moving up through the ranks to become globally responsible for their electronics group.

He continued to work with Magna even after he stepped out to run his own consulting firm, taking the company on board as a client.

“To be responsible for building entire cars, not just components or systems, is like a dream to me.”

Following his success at Magna, Olaf’s next leadership role was at American Axle & Manufacturing, a manufacturer of automobile driveline components based in Detroit. He was President of the firm’s European driveline division, but he left the company after 14 months. “I realised that it wasn’t what I was looking for,” he says.

Then the opportunity to join Valmet Automotive came about and Olaf jumped at it. A self-professed car enthusiast since he was a boy, the firm’s production capacity appealed to him. 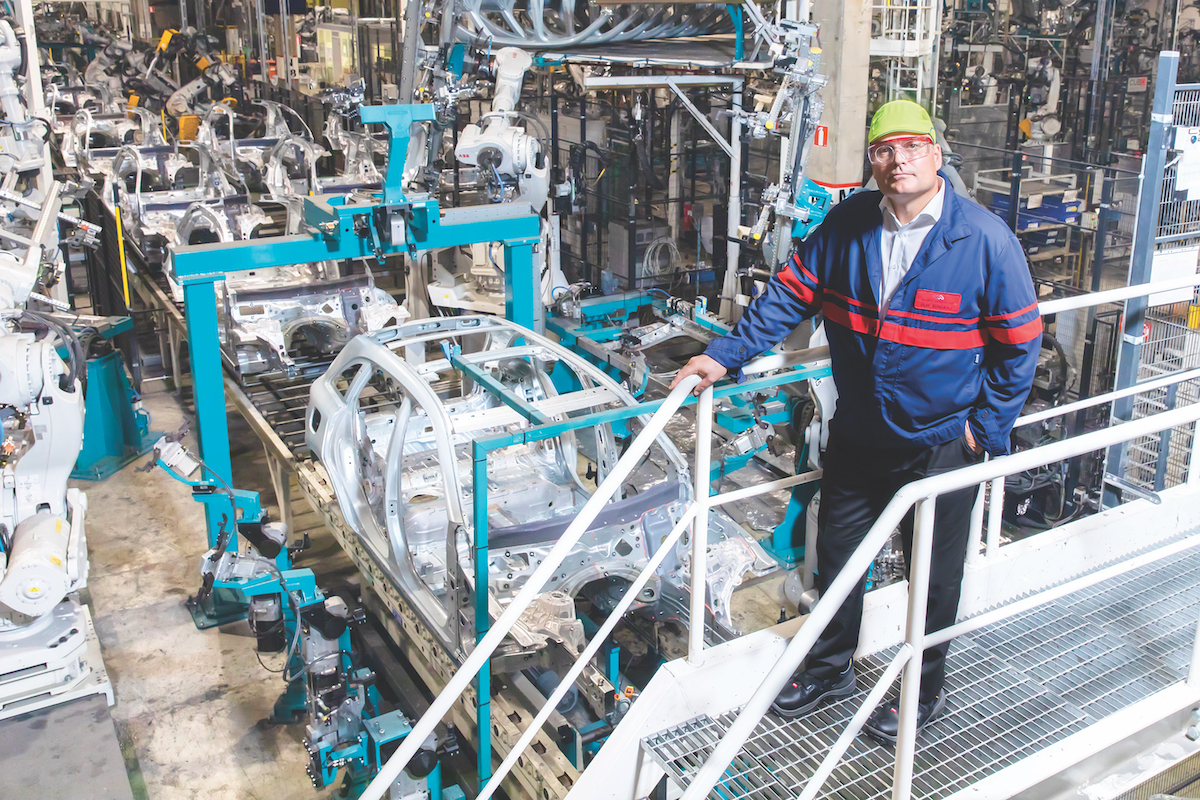 Instead of just making parts, Valmet Automotive has the expertise to manufacture complete vehicles. “To be responsible for building entire cars, not just components or systems, is really like a dream to me,” he says.

Now in its 51st year of operation, more than 1.4 million vehicles have left Valmet Automotive’s production lines. The firm has cultivated business relationships with several renowned automotive brands, including Porsche, Daimler and BMW.

The duration of these relationships, many of which span decades, is testament to Valmet Automotive’s excellent service and product quality. In 2017, Mercedes-Benz named Valmet Automotive its best partnering company despite the year being, by Olaf’s own admission, a tough one.

Nevertheless, the firm took on a contract to manufacture the Mercedes-Benz GLC, which required a huge investment of almost €100 million, a complete renewal of its production management system, taking on more than 2,000 employees and the building of Finland’s largest body shop complete with more than 300 robots.

Despite the company struggling to initially make the Mercedes-Benz manufacturing profitable, it was quick to learn and recover. For the launch of the fourth generation of the Mercedes-Benz A-Class in 2018, Valmet Automotive managed to keep production costs lean and turn a profit with impressive automation levels. “We launched the new car very smoothly for a very happy customer,” Olaf says with pride. “In addition, we restructured our engineering and convertible-roof systems businesses so that they are now running more efficiently and are in a much better shape. We managed to turn losses into profits.”

Valmet Automotive recorded net sales of about €663 million in 2018, 20% more than the year before. It was also a record-breaking year for the firm.

“We produced more than 110,000 cars in that year, which was more than we ever had before,” Olaf recounts.

“If everything goes well this year – if nothing happens to the economy – we are moving in the right direction to top this and have another record year.”

The company currently has around 6,000 employees worldwide – 4,000 are located in its plant in the south-west Finnish town of Uusikaupunki.

Riding on last year’s success, Valmet Automotive has now established a new business line for electric vehicle (EV) systems, focusing on systems and solutions for EVs such as high-voltage batteries. Production for its EV systems business line is set to begin this month, in a new plant in Salo in southwest Finland.

Backing Valmet Automotive’s success are three shareholders: Tesi, Pontos Group, and Contemporary Amperex Technology Limited (CATL).
Tesi is a state-owned investment company with a mission to promote Finland’s homegrown businesses and economic growth through capital investments. Founded in 1995, it currently holds €121 million worth of investments and commitments in its portfolio. Although it is a state-owned company and works to support fledging businesses by connecting them to suitable partners, Tesi is far from a charity. It expects its portfolio companies to perform. Every investment Tesi makes is made hand-in-hand with a private investor, on equal terms and with the same expectations of returns from the beneficiary company. As one of Valmet Automotive’s shareholders, it holds 38.46% of the company’s shares.

Pontos Group is Tesi’s partner private investor in Valmet Automotive. Like Tesi, it holds 38.46% of the company’s shares. Pontos’s investment focus is in unlisted companies as well as the real estate market in Finland and the Baltic countries.

In return, the acquisition of shares in Valmet Automotive represents a big step for CATL into the European vehicle market, which it is keen to enter. Since its establishment in 2011, CATL has embarked on a rapid expansion, opening offices throughout China before moving into the US, Canada, France and Japan. By the end of 2016, it had more than 10,000 employees worldwide. Currently, CATL holds 23.08% of Valmet’s shares.

To support its expansion into the EV business, the company is looking to recruit up to 400 new employees this year. “The EV business is our biggest area of growth and we are seeing a lot of potential here,” Olaf says. “Due to the current move from combustion engines to hybrids and electric vehicles, EV batteries are seeing an increase in demand.”

“The electric vehicle business is our biggest area of growth. we are seeing a lot of potential here.”

One of the biggest risks in vehicle contract manufacturing is unpredicted changes in the client’s requirements. For Valmet, a significant amount of its revenue is derived from manufacturing Mercedes-Benz GLC and Mercedes-Benz A-Class models for Daimler AG; its largest customer.

A sudden drop in demand for any of these two vehicles may result in inefficient allocation of resources and financial losses, while a sudden increase in demand will put pressure on production.

It is not uncommon for contract manufacturers to require demand forecasts from clients to reduce such risks, or compensation for orders that are smaller than those initially agreed upon. 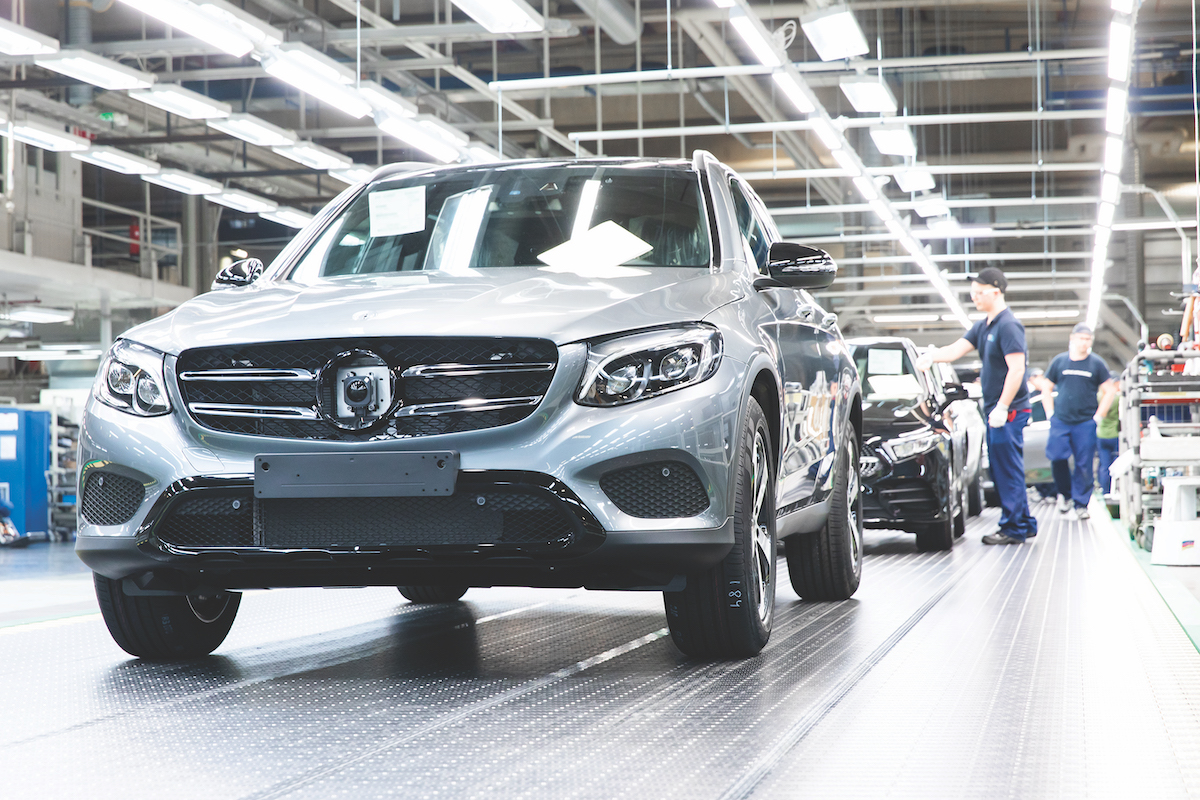 As such, diversifying into EV isn’t just a way to futureproof the company, but also reduces its dependency on contract manufacturing. Also helping the company to spread its risks are its two other divisions: roof and kinematic systems, and engineering services.

In the former, the firm has delivered more than 1.2 million automatic convertible roofs for brands including Audi, Bentley and Porsche. Other forms of kinematics, including active spoiler systems, which Valmet Automotive has been producing for one of McLaren’s models since 2016, are also part of this division.

Part of the firm’s credibility in the realm of EV has to be credited to Contemporary Amperex Technology Limited (CATL), the leading Chinese supplier of electric vehicle batteries and one of Valmet Automotive’s three shareholders. 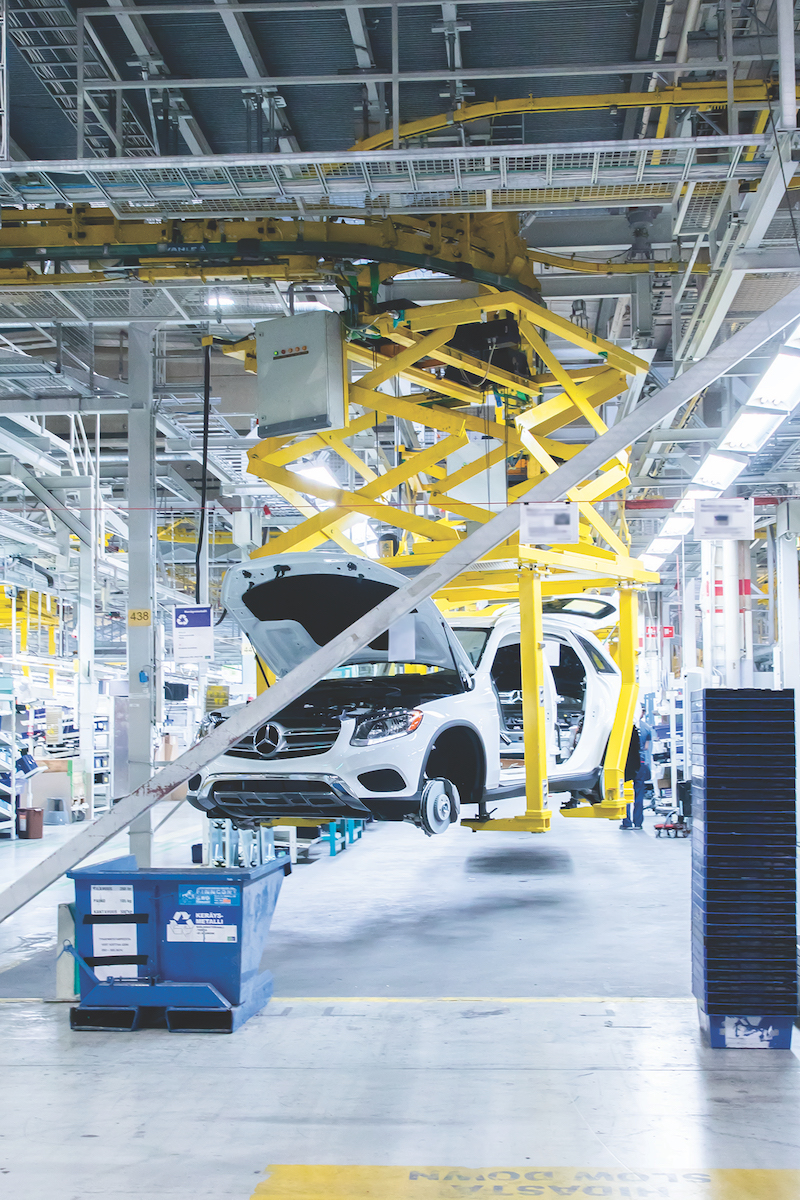 But even before its partnership with CATL, the company had already displayed its capacity for thinking ahead. Way back in 2009, it produced the THINK City
EV for now-defunct Norwegian brand Think Global.

Three years later, it delivered the Fisker Karma, a hybrid vehicle, for Fisker Automotive. Beyond EV batteries, Valmet Automotive also has the capacity to provide comprehensive edrive testing based on a catalogue that details more than 150 different test cases, each using up to 100 test batteries.

Olaf believes that the rise of EVs is just the beginning of an avalanche of change. “Up until 2009, any changes in the automotive industry could be considered just evolutions of the car,” Olaf says.

“But after 2009, and especially in the past couple of years, what is happening is more like a revolution. Things are accelerating and multiple changes are happening at the same time.”

Olaf predicts the way in which we see cars will be very different in the future.

“Imagine being stuck in a traffic jam. Because cars of the future will be connected vehicles, your location and situation will be known to others. You could have a coffee delivered to you by drone or enjoy some other services while you are waiting in the jam.”

Remember the THINK City EV and the Fisker Karma hybrid and it’s clear that innovation has always been at the heart of Valmet Automotive’s business. But THINK City and Fisker Karma are more than five years old. Valmet Automotive is ready for something new, and that comes in the form of the Scouter, developed for Rideascout, a company based in Tampere, Finland.

Scouter is a carbon-neutral, zero-emission four-wheel vehicle designed for low-traffic environments; where a bicycle can go, so can Scouter. Rideascout has proposed the use of Scouter as a delivery vehicle as well as for transporting guests in sprawling ski resorts and golf courses.

In its essence, the Scouter is an electric vehicle with a maximum load capacity of 250 kilograms and a battery that can take on 25–35 kilometres on a single charge, depending on the terrain. Once drained, its battery takes only an hour to become fully charged. To maximise battery life, users have the option to pedal manually, which charges the vehicle while it is moving.

Despite the Scouter only being announced in March this year, Valmet Automotive and Rideascout have been working on it since 2017. Valmet Automotive’s role in the project has been to develop and engineer the Scouter’s entire technical structure, from the chassis to its electronic transmission. They are also responsible for safety tests and for ensuring that all regulatory compliances are met.
Industrial production is slated to begin early next year, with the delivery date estimated to be around May 2020.

And when that happens, Olaf will make sure that Valmet Automotive rides the wave successfully. “We will have to make sure that we are able to build cars that support these functions – which we will be,” he says confidently.

“What we manufacture will always be driven by what our customers want us to develop. Our role is to adapt to new automotive technologies, put them into cars, test them, and make sure our cars work well. Our products will always deliver what is needed.”

No matter how vehicle manufacturing may change in the future, Olaf is certain about one thing. “I have always been in the automotive industry and I always will be. Cars have been my interest since I was a child.” 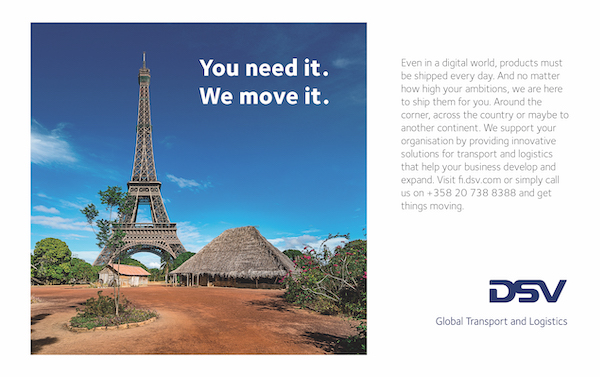 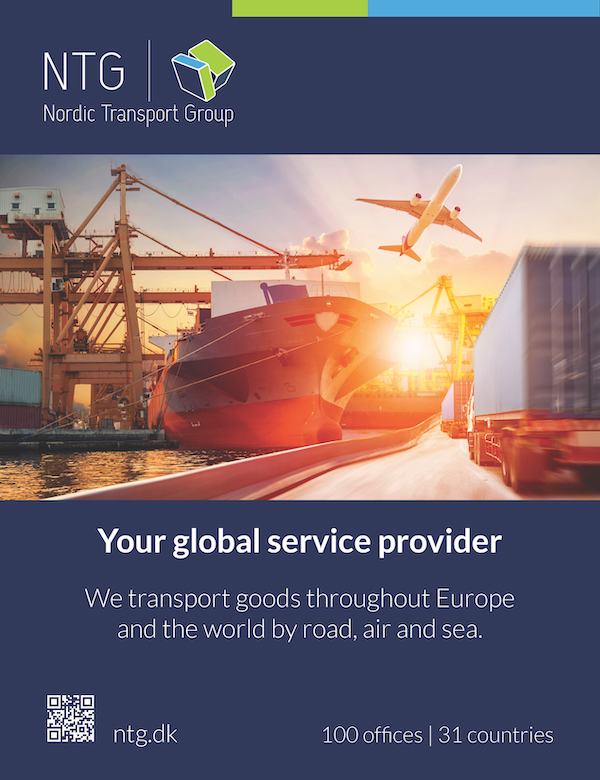 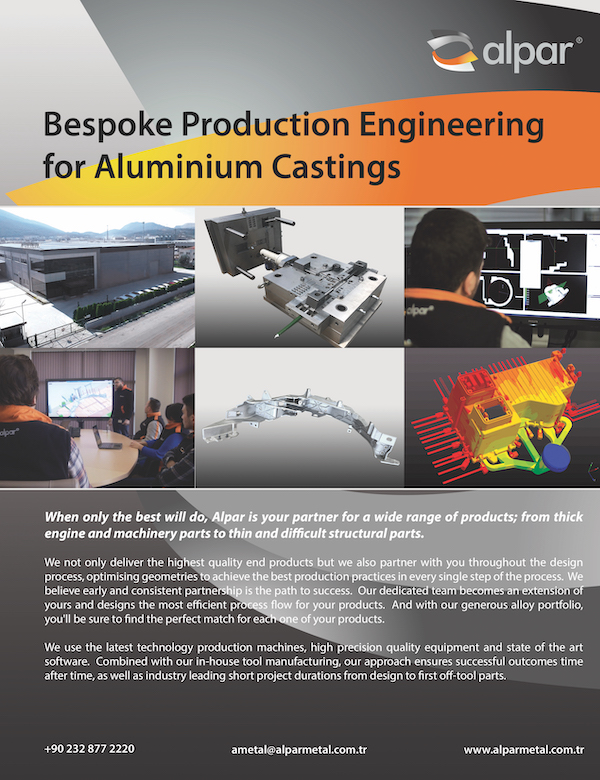