Given he’d spent school holidays and the odd weekend helping his father out at construction sites, a teenaged Chris Abouhamad was adamant that he wouldn’t be pursuing a career in the same industry.

“Growing up, I definitely didn’t think I’d go into construction,” he laughs. “I used to work on sites whenever my dad needed an extra pair of hands.” And yet, when the time came to choosing a vocation, Chris concedes that all it took was a gentle nudge in the right direction from his father to place him on a career path that would define a promising future.

“I remember it very clearly,” he tells. “During the first few months that I’d been out of school, I went up to Dad and asked him, ‘Do you think I should become a plumber?’ because before working in construction, he’d been a plumber. He looked at me and said, ‘Look, plumbing is a fantastic trade, but I think you’d enjoy construction more.’ It was that simple.

“Had he said, ‘Yes, go be a plumber,’ then we may not even be having this conversation. But he was 100% right. The fact that he was able to help guide me along the way was a huge benefit. It just became second nature to me. Seeing him confident in what he did made me confident in what I did.”

Adding to his prior knowledge with a Bachelor of Construction Project Management from the University of Technology Sydney, Chris spent the next 15 years honing his skills by working with a wide variety of companies, from large corporations to small building firms, across projects ranging from A$5 million to A$500 million.

And the more time he spent in the industry, the more his passion grew. “I’ve always loved the idea of construction at its most basic level – being able to look back at your work and understand the progress,” he says.

“In my opinion, it’s the most honest form of work because you can step back and physically see what you’ve completed. To this day, watching a project on paper come into existence is still incredibly inspiring for me.”

It felt obvious then, that in 2013, after six years in the sector, it was time for Chris to apply his extensive experience to his biggest project yet – founding his own business. The result was Eastern Pacific, a construction, development, project and design management company.

“It was always going to be the natural next step,” he says. “I had a vision for a company that would be about attempting to solve a lot of the larger issues in the construction industry today. It was never about trying to reinvent construction; it was about reviewing it, mastering it and making it better.

“Because I have experience working on construction sites, and for other companies, I’ve seen first-hand that there often is a lack of systems, lack of direction and lack of structure. I wanted to use all that knowledge to be sure those issues never occurred at Eastern Pacific.”

Going through those tough times helps you appreciate and understand what success actually looks like.

And today, seven short years later, Chris has grown Eastern Pacific into one of Australia’s most innovative and respected development and construction businesses, though he is quick to note that those early days weren’t without their challenges.

“You never really know what you’re getting yourself into when you start your own business,” he says. “It doesn’t matter what anyone tells you, you’re not going to know unless you do it yourself. There is no easy way to make a business successful. It takes a lot of hard work, good habits and the right strategy at the right time. You do all you can to make it work, and then, all of a sudden, you realise you’ve passed that problem, and you start to look for the next challenge. You learn so much from those obstacles and that’s what pushes you forward.

“Going through those tough times helps you appreciate and understand what success actually looks like. Realising how little you knew at the start, and wondering if 10 years from now, you’ll look back and think, ‘How little I knew then!’ It’s about knowing you’re able to make the business better than it was the day before.”

For Chris, a non-negotiable when establishing Eastern Pacific was to ensure that rapid future growth did not mean compromising on sustainable practices – a cornerstone of its philosophy. “Sustainability is a key part of the growth of the company because we aim to be one of the frontrunners within our competition,” he says.

“The industry has changed more in the past five years than in the past 50. The adaptation of technology, as well as the adoption and availability of data, has made the overall approach to construction so much better, but very little of the industry is effectively utilising that information.

“We really want to emphasise sustainability but without sacrificing functionality, always keeping in mind user efficiency and affordability. We have our own environmental targets that we keep meeting, if not exceeding year on year. We’re exploring with embedded network systems and the adoption of battery and solar systems as well as using more sustainable construction solutions.”

But even as the industry continues to advance at a rapid pace, Chris is determined to never lose sight of the fact that one of Eastern Pacific’s greatest strengths is its focus on teamwork and community.

“I don’t see myself as above my employees,” he says. “I treat them like family. I think that level of comfort allows them to feel more relaxed, and once they’re more relaxed, they tend to perform a lot better.

Our success is this symphony of creativity, passion, technical knowledge and drive to push ourselves.

“One of the most important things you can do as a business is to make sure that there are support networks in place so that employees can not only do their job well but enjoy it and benefit from personal development in terms of their career trajectory. That means a lot to me because I appreciate that not everyone will open their own business. For those who want to stick around, I want to make sure that staying with us is as valuable as possible for them.”

And that emphasis on cultivating a sense of community doesn’t stop with employees either. Chris believes that all partnerships should be built on those very same foundations. “The way that we develop relationships with key suppliers is the same way we approach our clients’ interactions – it’s all about trust, care and authenticity,” he says.

“We’re selective about the people and companies we partner with; they have to have their morals and ethics aligned with ours. Rather than overcommitting to the market or selling ourselves out and jeopardising the integrity and pillars on which the company was built, we want to make sure that vision is sustained by the natural growth and significant partnerships we’ve built throughout that process.”

In fact, when asked what he believes his biggest strength is as a leader, Chris reveals that over time he’s come to realise that his empathy towards others has contributed to Eastern Pacific developing a reputation as one of the most customer-focused companies in the game.

“I think that’s a key indicator as to why I have repeat clients and customers,” he says. “Because at the most basic level, we want to find solutions to problems and we want to make the individual happy. When someone genuinely cares, it shows. So our success is this symphony of creativity, passion, technical knowledge and drive to push ourselves.

“Word of mouth has definitely been the single most powerful proponent for our business. When you regularly have clients call you at the end of projects to tell you how happy they were, to feel so compelled to say thank you, it’s an incredibly sobering experience, because it feels like everything you’ve ever worked hard to do has been worthwhile.” 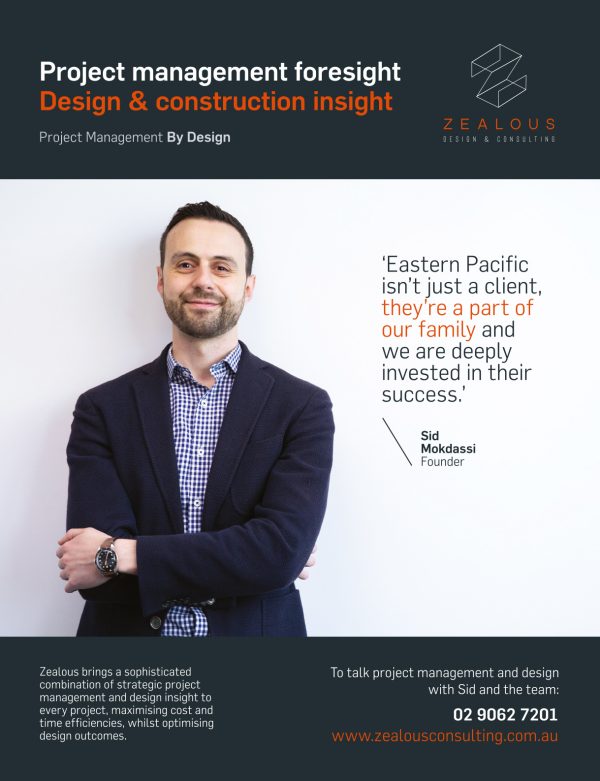