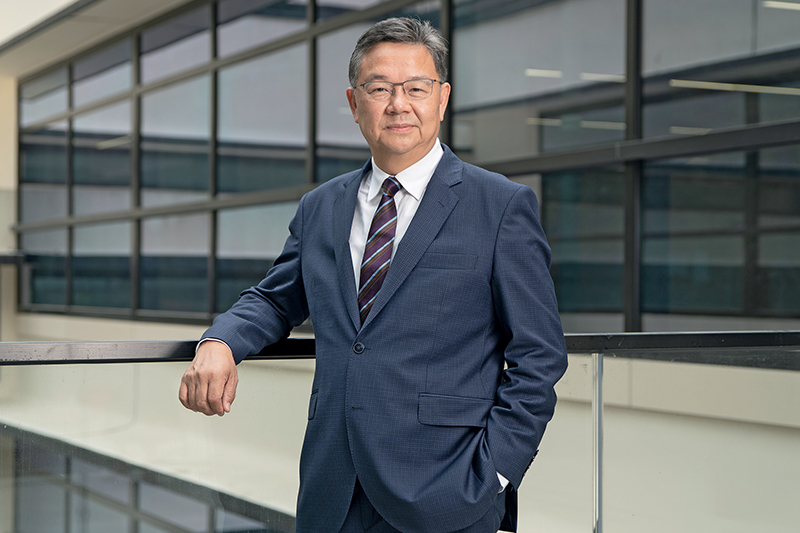 This year, Shui On Group will celebrate a significant milestone – its 50th anniversary. Vincent HS Lo, Chairman of Shui On Group, had a vision when he started the Group. Inspired by the determination of the central character in Jonathan Livingston Seagull, the novel that came to the fore of popular culture in the early 1970s, he has always believed in the constant need to strive for excellence.

It sowed the seeds for the “Shui On spirit” and the philosophy became the Group’s core value. SOCAM, the Hong Kong-based construction company and property developer, has maintained its ethos of striving for perfection since 1971.

As clear demonstration of that, the Group still bears the logo of a seagull. At a smaller but no less significant level, 2021 will also mark 35 years since Freddy Lee (today the CEO of SOCAM Development) joined the Group. Besides a brief stint with a Shanghai-based developer, he has accumulated extensive experience throughout Shui On Group.

As the HKSAR Government is driving more housing and healthcare projects in Hong Kong with an increasing need for design and technological upgrades, Freddy returned to Shui On in 2019, believing that its expertise and his own experience could prove beneficial in this market.

“We’ve been doing public housing and institutional projects for 30 years,” he says. “We have very good foundations and, more importantly, the necessary skill set, and the management is very experienced with these kinds of projects. So, I thought, ‘OK, I can help the company on that aspect,’ because I’ve been doing these kinds of projects for more than 20 years, along with my other role, the property development in Mainland China. The skill set I acquired can help the company in further expanding the business.”

Before Freddy joined Shui On, he studied quantity surveying in the UK and, upon graduating, he immediately returned to Hong Kong and started looking for jobs in the field. Realising that he had no intention of spending his career sitting in an office most of the time, he joined Shui On, a building contractor at that time, as a quantity surveyor trainee. Freddy spent the next 10 years in the position, attaining experience and professional qualifications while also looking for opportunities in management – or more specifically, project management.

To this end, he studied project management as a postgraduate in Hong Kong. He was also fortunate that at the time, the company was growing thanks to the ample opportunities with Hong Kong’s long-term public housing policy.

He saw the chance to take on a project manager role on what he describes as a small project, a group of sample flats on a temporary site opposite the Hong Kong Housing Authority Headquarters.

But Freddy has a constant willingness to try new things and over the ensuing years, that willingness saw him work on larger and more complex projects. The next step took him further afield – SOCAM found itself with the chance to take over a challenging project in downtown Shanghai.

In 2001, Freddy and a few others crossed over to Mainland China to oversee not just construction management, but also development and sales. “At that time, 20 years ago, not many Hong Kong people wanted to do that because there were a lot of opportunities in Hong Kong,” he shares.

“Even myself, before I left Hong Kong, I was taking care of one of the biggest housing projects. After a while, I thought, ‘OK, I’m willing to try, as usual, new things.’ I took the opportunity to visit Shanghai and I started to understand what a real developer is. It is the Shui On spirit that motivates me.”

Thanks to Chinese housing reforms, the real estate development market was just starting to kick off. Shui On has diligently established a strong credential and reputation with Shanghai Xintiandi, the first city-centre master-planned community in China, and a new landmark for Shanghai.

Freddy has spent 14 years in Shanghai and other cities in China. In 2011, he was promoted to CEO of Shui On Land, another member of the Shui On Group. Among other projects, Freddy worked on Rainbow City, a mixed-use redevelopment of around 1.3 million square metres of total developable area in Shanghai.

We need to equip ourselves and our people, to sharpen our competitive edge when facing new opportunities and crises as well.

Upon completion of the last phase of the residential development recently, Freddy says the property value has appreciated by more than 20 times. After a brief stint with a Shanghai-based developer between 2014 and 2019, Freddy was eager to share his knowledge and practical experience with the younger generation and decided to return to the Group.

He had spent decades working there and truly valued this time. Amid strong community-driven need for healthcare projects and the ever present demand for affordable housing in Hong Kong, Freddy was given the task of sustaining the company’s growth and, at the same time, developing and supporting the team to the next level.

COVID-19 isn’t the only crisis SOCAM has endured, Freddy explains, and the key to that survival is leadership, discipline and preparation. “Whatever crisis we face, once we know that the situation may deteriorate and cause disruption to our business, our management responds proactively and collectively,” he reveals.

“We set up a special task force under the Crisis Management Team to manage COVID-19 in the first instance. We reviewed our communications strategies to ensure everyone knows what to do in urgent situations. At the operational level, we follow the suggestions of the Hong Kong Department of Health on precautionary measures in the office and onsite to protect our staff and workers.

“We also introduced a working from home policy for the first time, even for our suppliers and sub-contractors. It’s not easy when most of the work is carried out onsite, but we are trying our best to do this.”

Freddy points out that one of the challenges he faced when taking on the CEO role in SOCAM was building a comprehensive succession plan, which is a common problem faced by Hong Kong’s construction industry. Throughout much of 2020, he was working to identify talent across the businesses, selecting potential successors and ensuring they are up to the task of leadership. 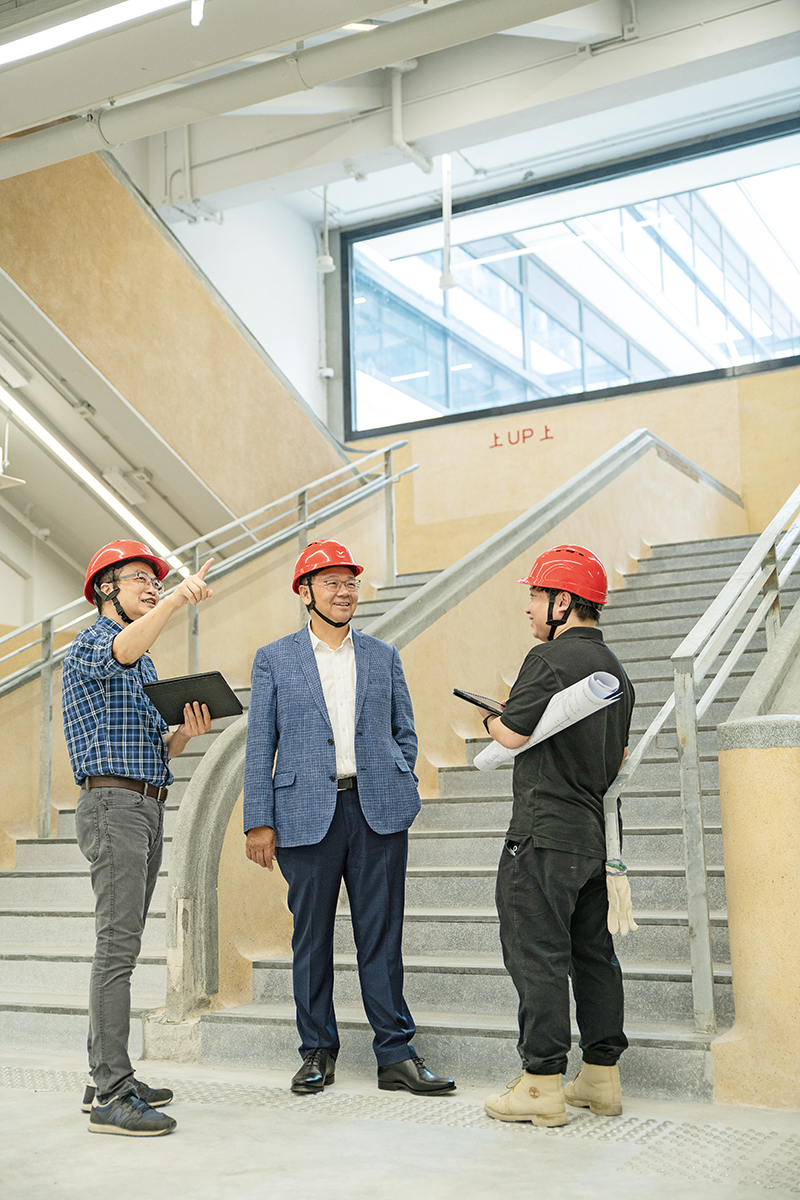 Ideally, he says, these potential successors will be prepared to move into the top spot within the next couple of years. “From a management point of view, we are bridging the talent gap,” Freddy explains.

“I’ve grown with Shui On over the last 30 years and I’ve undertaken a lot of learning and development; it’s time for me to reciprocate. Integrity goes first in everything we do, and we always value our people’s development and growth. We hold on strongly to the past, but at the same time, we encourage and equip our people to embrace new challenges.

“I believe that we need to cultivate and care about our people. We get them to do some external courses and so on, but we also build intimate relationships with our staff. In fact, I believe that these young executives are our mentors too. With the constant dialogue over the course of development, we can exchange ideas and discuss new opportunities and share what is happening around us. We learn from each other.”

Freddy believes that people are the key to sustaining SOCAM’s success story. “Because of the nature of their work as engineers, construction people are very task focused,” he says.

“We want our culture to not only equip our people with what they need for their jobs. We look beyond that to boost their motivation through actualising common goals together and contributing to the greater good of the communities.

“Right now, new things happen around us every day, whether it’s economic, financial or technological, and it is changing so rapidly. We need to equip ourselves and our people, to sharpen our competitive edge when facing new opportunities and crises as well. That will become the new normal.”