There’s still something iconically Australian about Stephen Coop, despite many years of living overseas. The CEO of NHP has one of those easygoing natures, self-deprecating at times, keenly intuitive at others, and capped by a great sense of humour.

He also loves a party, which is why it seemed a little odd to hear one wasn’t thrown to celebrate his company’s 50th birthday last year.

“Let’s just say we did something a little different. We’ve had parties, but this time we decided that NHP has been on such a great journey that we should continue it, together. “Every employee, all 850 of them, received a Red Balloon gift voucher to spend on an experience of their choice: hot air ballooning, a night in a five-star hotel, parachuting, glamping – anything they liked. I chose a V8
hot lap with Jamie Whincup, while my wife and kids went zip-lining through the Daintree Rainforest.

We’re collecting all the photos and putting them, and NHP’s story, in a book, which everyone will receive in a couple of months.”

NHP’s story begins with Nigel Hugh Peck, who founded the Victorian company in 1968. Launching with 17 employees, it was Nigel’s dream to run a fully Australian-owned company offering products, services and solutions to automate production, control power, and manage energy. Today, NHP has 22 branches in Australia and New Zealand, boasts a global network of suppliers, and markets more than 15,000 products.

Name an iconic infrastructure project, and NHP will have its stamp on it – the Perth Stadium, the MCG, Victoria’s Ravenhall prison and the tunnel projects in Sydney among them.

A generous benefactor to numerous charities and organisations, Nigel died in 2017 at age 89. His son, Matthew, is on the NHP board, although not directly involved in the business, and the company runs as a family trust.

“We have one of the lowest employee turnover rates in the industry, considering people vote with their feet; we are a place where people want to work.”

“Obviously, we’re getting bigger and bigger, but we’re still big on family values,” Stephen says. “We maintain a close relationship with our employees, having regular catch-up drinks and barbecues, things that many larger companies don’t do any more. We have one of the lowest employee turnover rates in the industry considering people vote with their feet; we’re a place where people want to work.

“Employees with long service histories can be good or bad. Sometimes, the longer people stay, the less they want to change. But, I’ll just remind them of changes to their lives at home.

Do they want to go back to a car with wind-up windows, or black and white television? We have an employee who’s been with us for 42 years whose mindset changes with the world. He’s embraced new technology and is the epitome of what we need.”

Stephen admits NHP is also caught between new and old worlds when it comes to customers not ready to operate on a digital platform.

“They still want their printed catalogues. We’re quite an old industry dealing with electrical contractors whose average age is probably in the mid-fifties and who have yet to hand over to the next generation. If you go too quickly, you leave them behind.

“Our suppliers must have a strong digital footprint though,” he adds. “For example, Sprecher + Schuh, now owned by Rockwell Automation, has been with us since the beginning. But they’ve grown with the times and offer the very latest in technology.” Stephen, based at headquarters in Richmond, joined NHP in 2015, having spent 16 years at Schneider Electric working in London, Bulgaria, Sydney and Slovakia. At NHP, he acknowledges the trust customers have in dealing with a company still 100% Australian owned.

“Our people are engaged in the local community of whichever town our branches are in. They go to the local club with the guy who’s running the local mine, their children go to school with the kids of the local electrician. We’re not just putting an Australian name on a product; we actually act like a true Australian company.”

Stephen thinks the biggest shake-up Australia faces is the electrification of cars. In Europe, more than 30% of cars are electric, whereas the number in Australia is less than 1%.

“In five years, it will be an electrician talking about motors, not a mechanic, so we need to catch up. Australia is beholden to the rest of the world, because we don’t make cars any more. Our choice of car will be dictated by whatever comes from overseas. It’s a great opportunity for us and we’ll be ready for it.”

“There you go! How many CEOs go Vespa riding? I just did a four-day ride around the 200-kilometre Silo Art Trail. I enjoy surfing, too, but it’s bloody cold in the water down here. My board doesn’t get out of the garage much.” 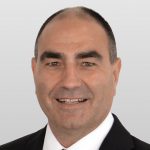