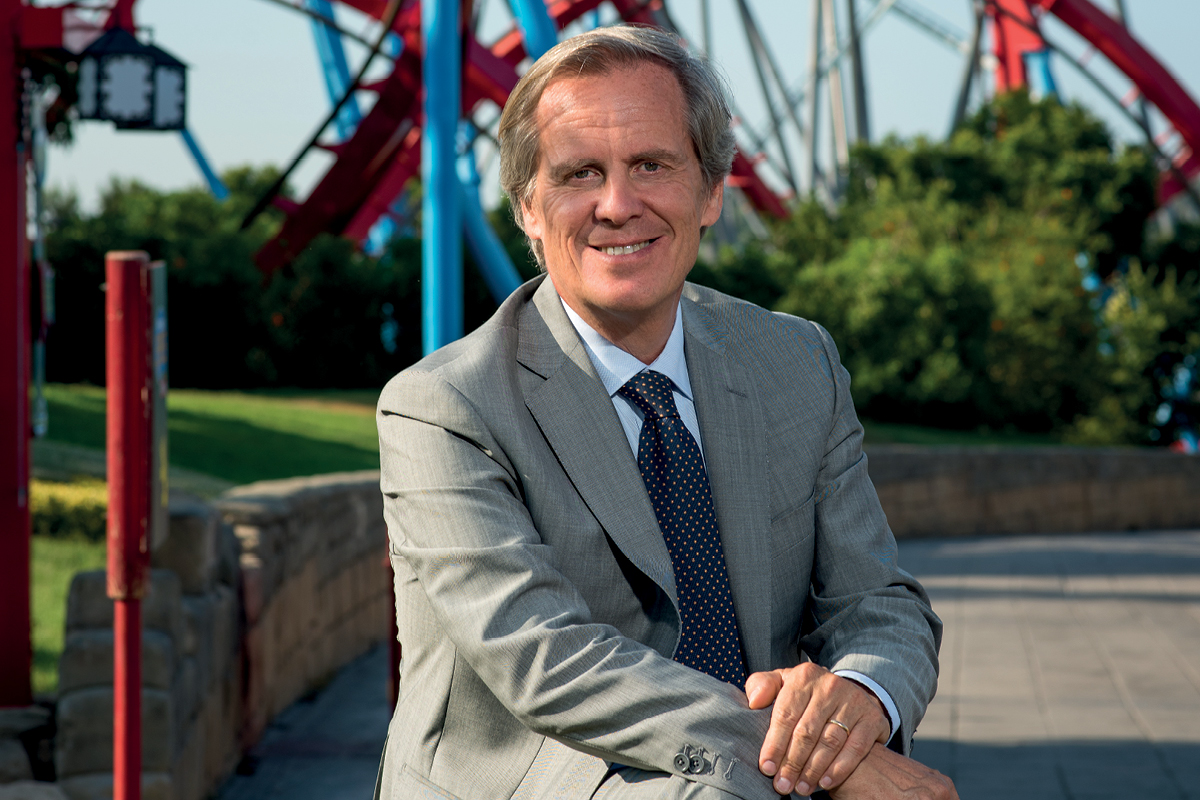 A family of six piles into a self-driving yellow taxi and is whisked through a kaleidoscopic cavern of colour and sound. The familiar faces of Big Bird, Elmo and Grover guide visitors as they glide from room to room, using Wii-like game controllers to collect cookies and solve puzzles on a giant screen.

Street Mission, a newly opened, interactive dark-room ride featuring the characters of Sesame Street at Spain’s PortAventura World, has been praised for its seamless blend of animation and animatronics, engineering and storytelling, mystery and nostalgia.

Its popularity among children and adults from around the world is just one of the many ways PortAventura World has graduated from an iconic local amusement park to a global leader in family-friendly experiential entertainment under the leadership of CEO Sergio Feder.

“Our new Sesame Street-inspired kids’ area is one of the attractions I’m most proud of,” Sergio says. “When I arrived at PortAventura World 10 years ago, this theme park was already a leader in Spain, but it was not yet oriented towards an international audience,” he says. “The hotels were diamonds in the rough and I could see that there were many opportunities for developing our product as well as our performance.”

“I could see that there were many opportunities for developing our product.”

He set out with two main objectives – to make families PortAventura World’s target audience, and to reach that audience beyond the European mainland by designing experiences that he describes as “legendary”.

“Probably the biggest success of the last few years was opening Ferrari Land, which is our third theme park and is home to the world famous Red Force,” he says, referring to the towering, crimson roller-coaster that has been recognised as the tallest and fastest in Europe. Ferrari Land, developed in collaboration with the Italian sports car brand, is one of the three theme parks, six hotels, one convention centre and one RV park that make up PortAventura World – a sprawling family entertainment complex that attracts more than five million visitors per year, including about one million from France. Ribbon cutting at the opening of Ferrari Land in April 2017

“Our strategy is one of excellence and internationalisation, based on reaching agreements with international brands that are known across the world,” Sergio says. “We’re not just a theme park anymore,” he adds. “Today, we are a destination.”

Transforming PortAventura World into a world-class entertainment destination has not been easy. Sergio says his main challenges are managing a team of more than 2,000 employees and harnessing their energy and talents to execute a unified vision – what he calls “a dream experience for visitors”.

Fortunately, he has developed a series of programs that foster team unity and loyalty, including training courses that promote employees’ professional advancement and volunteer programs that provide staff with opportunities for civic engagement.

“Many of our workers dedicate their knowledge, know-how and time to social action projects through the PortAventura Foundation,” Sergio says. The foundation’s crowning achievement, he says, is PortAventura Dreams village – a 9,000-square-metre complex where children with serious illnesses and their families are invited for all-expenses-paid holidays while they receive treatment and recover.

“We want to keep innovating constantly.”

The program, which was set up in collaboration with local hospitals and the Red Cross, was launched in October this year and will accommodate 200 families annually. “We share the opinion of our medical partners, that a period of entertainment and relaxation can be therapeutic for these children and their families,” Sergio says.

These partnerships are emblematic of Sergio’s philosophy that when it comes to partners and suppliers, quality trumps quantity. “The safety of our customers is paramount to PortAventura World, which is why we have made it our policy to concentrate on a small number of suppliers who subscribe to the same ethical and good governance commitments that we follow as a company,” he says.

“This way, when guests engage with our attractions, they have the assurance that they are protected by safety and quality standards that are absolutely the best in the world.”

Looking into the future, Sergio plans to continue pushing PortAventura World towards carbon neutrality, innovating new attractions and partnering with well-known brands to draw visitors from beyond Spain’s shores.

He says: “We want to innovate constantly because this is essential to adapting to the needs of visitors, and to obtaining a successful, sustainable business model.”