Being a female leader in the banking industry, Diane Karusisi considers inclusion to be an issue that lies very close to home. It has been a hard-won fight for herself, and one that she continues to champion for others, whether they are women aspiring to professional success in the finance sector, or members of the informal economy who have traditionally been overlooked by the banking system.

She is starting where it makes the most sense for her – at Bank of Kigali, Rwanda’s largest commercial bank, where she has been CEO since 2016. She believes that the inclusion of women in professional positions in the firm will bring a ripple effect to her cause.

“Women are more sensitive to issues around inclusion because they are the ones who have always been excluded, traditionally and economically. That’s why it is absolutely critical to me that more women are getting jobs and being promoted at the bank,” she explains.

I believe that banking and financial services have the power to transform local economies.

Currently, 52% of Bank of Kigali’s employees are female, but Diane believes that more can be done. “We are not doing as well when it comes to managerial positions,” she admits, acknowledging the skewed proportion here of 65% male and 35% female.

“I don’t just want to empower women in junior positions, but also to see them grow into more senior roles.” Born and educated abroad, Diane holds a degree from The University of Fribourg in Switzerland.

She taught at the university while pursuing her doctorate before spending two years at Credit Suisse. In 2009, she moved to Rwanda, motivated by a desire to do something for the country that her ancestors called home.

“I believe that banking and financial services have the power to transform local economies, and I’ve always been inspired by what the sector has done for the economy of Switzerland. I saw my relocation to Rwanda as an opportunity to be a part of the engine of change in the country,” she says.

When she took on the role of CEO at Bank of Kigali, she brought with her a clear vision. “It was already a successful organisation but was very much a corporate bank dealing with large companies. I felt that it was important for the bank to work more with the everyday Rwandans to become more relevant in the lives of the masses, such as the farmers and the small business owners,” she asserts.

Technology has played an important role in enabling this shift. For the past four years, expanding the bank’s digital capabilities has been one of Diane’s main focuses. “There were people who questioned the massive investment we put into it at the start, pointing out that we were already the largest bank in the country and that it wasn’t necessary to change the way we do business,” she reflects.

“But I never doubted that it was the right thing to do. In fact, COVID-19 has only proven that going digital and being able to work remotely isn’t for the future – it’s for the present.

“One of the goals of our digital transformation is to create digital ecosystems for various sectors,” Diane reveals.

“We started with the agricultural sector because it is a critical part of Rwanda’s economy – more than 70% of the population work in agriculture, but only 6% get any funding from commercial banks. This is an unhelpful mismatch that we feel confident we have the ability to address.” Today, the bank runs a digital platform that supports more than two million registered farmers. To the users, it functions as a service provider that shares practical tips and best practices.

But because of the information that the farmers have submitted, it also doubles as a comprehensive database that tracks the seeds and fertilisers these farmers use, as well as other socioeconomic details.

“It has allowed us to serve these customers better, because we now have an understanding of who they are and what they do,” Diane explains. Through the platform, the bank is able to identify farmers who qualify for small loans, which can be offered and disbursed through a complementary mobile wallet launched last year.

“The productivity of small farms in Rwanda is quite low when compared to those in Europe or other developed economies. We believe that there is potential to double or triple the yield of these farms by providing them with small loans to purchase more fertilisers or machinery,” she continues.

“The mobile wallet allows farmers to receive these loans without putting up collateral or going through the bureaucracy and paperwork that have been so characteristic of banks for a long time.” In addition, the wallet also gives users access to supplies sold by agri-dealers from around the country.

Given that working with large corporations appears much more lucrative, it may seem counterintuitive to focus on the lower-income masses. However, Diane begs to differ, saying, “Small businesses are the heartbeat of the economy in every country. They provide the most jobs and are key to the supply chains. A large business such as a brewery, for example, won’t be able to get its product to the market and won’t survive if not for small businesses such as distributors, bars, transporters and the farms that supply the raw materials. By financing small businesses, we get a good understanding of how value is created and distributed in the economy.”

Through rallying support for the common people, Diane hopes to build a company that reflects her beliefs. “I want our services to be easily accessible to everyone; I want to leave a legacy of inclusion,” she says. In doing so, she is also aligning Bank of Kigali with an important movement in Rwanda.

“We strongly believe in the vision set out by the leadership to transform this country into a middle-income nation. I’ll do everything I can to make this a reality. I want the bank to be a champion for any initiative that can help us realise this vision.” 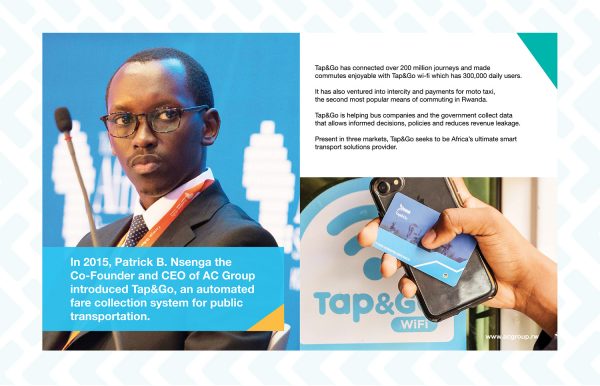