Banking on it: Jahja Setiaatmadja 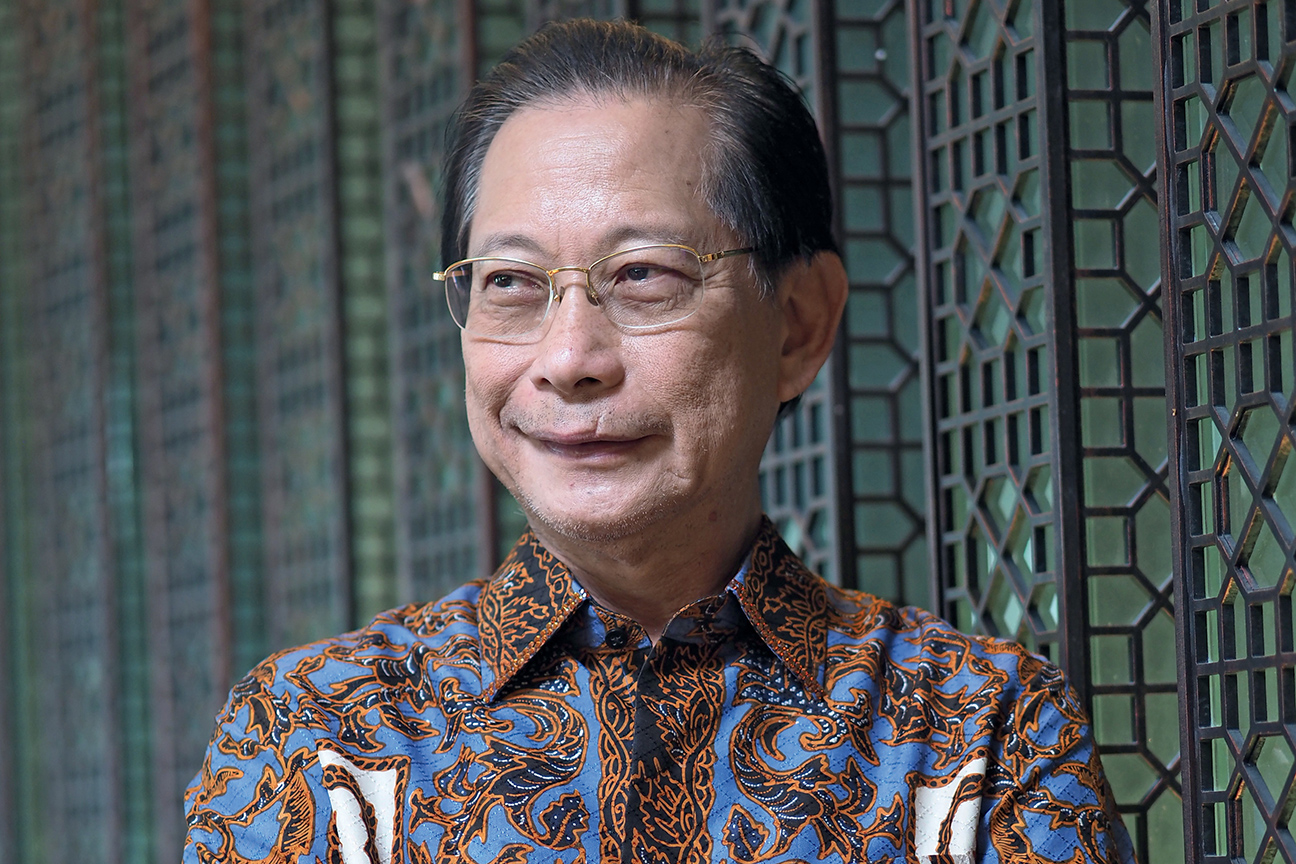 While the banking sector faces many tests, resilience is arguably the most common. As a pillar of modern society, banks must endure whatever comes their way – and much does. From financial crises to global pandemics to terrorism and personal scandals, they are more vulnerable than their overflowing war chests suggest.

With so much to lose, banks have a duty of durability; stakes so high means second best will never do. For the resilient bank, there’s everything to gain. Consumer confidence owes a great debt to the buoyancy of a bank.

The foundation of a financial institution’s reputation is the ability to successfully weather a storm, and the volatile nature of economics means banks are often given the chance to so prove their worth.

And so it was in late 1997 when Bank Central Asia (BCA), Indonesia’s largest privately owned bank, found itself in the stranglehold of the Asian financial crisis. The July collapse of Thailand’s baht caused a chain reaction among Asia’s economies that devastated the region.

Hardest hit were South Korea, Thailand and Indonesia – the Jakarta Stock Exchange tanked throughout the back end of 1997. Riots broke out as the rupiah flatlined, eventually leading to the resignation of President Suharto.

A bank is not more than its people.

So much to lose. In those turbulent months, Indonesia’s financial institutions faced a challenge even the country’s leader could not endure, yet today – and several global crises later – BCA is one of the nation’s largest companies.

“Indonesia deserves a strong bank,” says its President Director Jahja Setiaatmadja, who joined in 2011, a time when the country’s banking sector was dominated by foreign financial entities. “You can’t boost a country’s economy from a head office halfway across the world. The CEOs of the big banks are in offices in New York or London, where they’re unable to fully concentrate on Indonesia, especially before the Asian financial crisis.”

BCA’s large market share in Indonesia convinced Jahja that a local bank could make the biggest difference. “We know our customers, we know the culture, the very unique culture of Indonesia, and we know how to boost the local economy,” he insists. 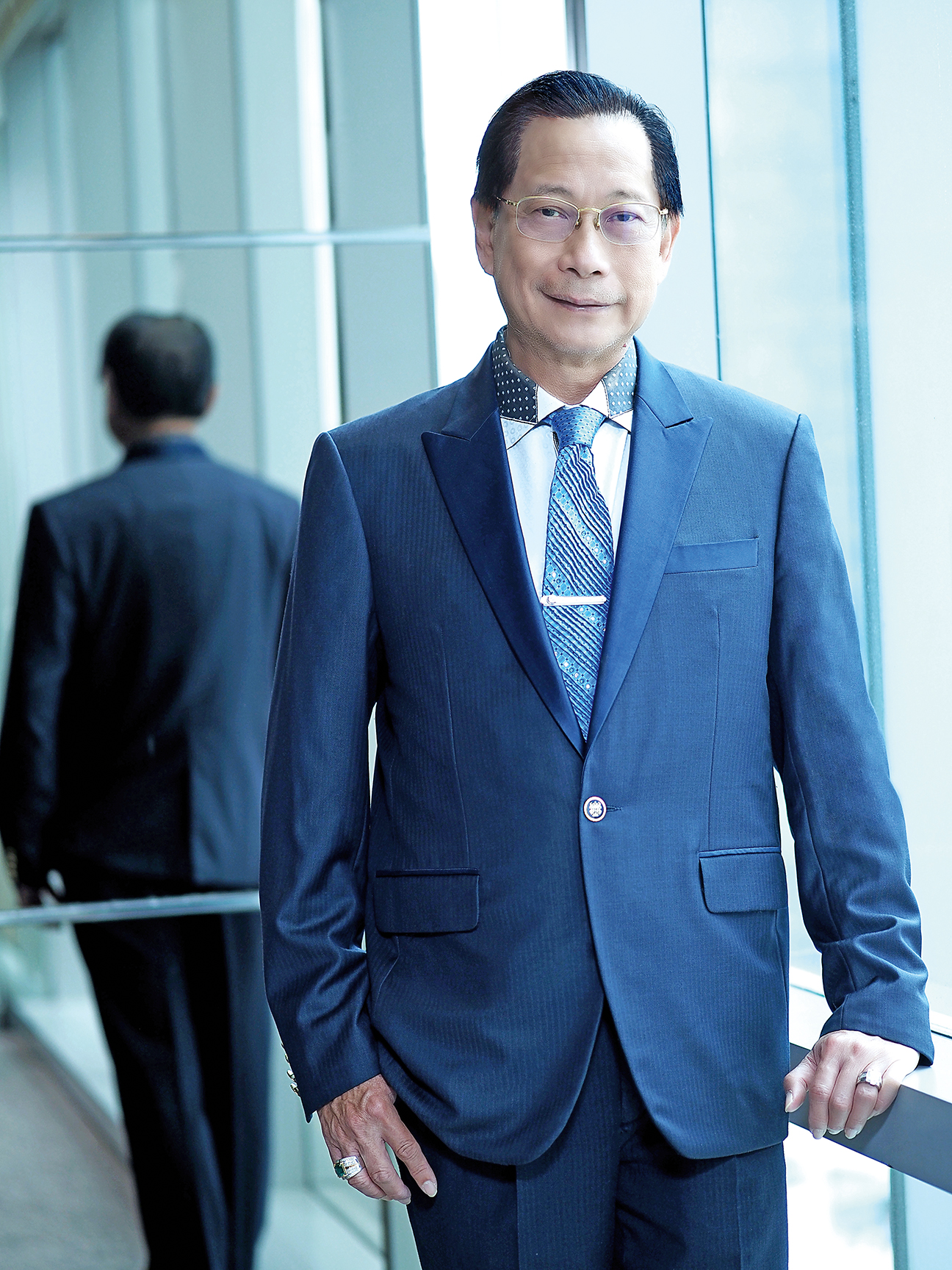 Founded and owned by the Salim Group, Indonesia’s biggest conglomerate, under Jahja’s leadership BCA has made a name for itself as a lender, particularly to individuals. “Before I became President Director, consumer loans by this bank were almost non-existent. We were very much concentrating on corporate, commercial and SME loans,” he explains.

The mortgage crisis in the US awakened him to a growing reality. “People just weren’t being prudent,” he says. “I believe that if there’s prudent policy in mortgages, car financing or credit cards, consumer loans can be extremely viable.”

Viable they may be, but such loans aren’t easy to come by. That’s by design, Jahja says, to make sure the system runs smoothly. “It’s quite difficult to get a loan from BCA because we need confidence in our customers,” he points out.

“We need collateral, we need to know about their experience and we need them to prove their financial viability.” Once BCA has that confidence, it offers its customers some of the lowest interest rates in the country.

“One of the biggest problems banks face is the non-performing loan,” he says. “If you underwrite non-prudent loans, they become non-performing when problems – like a global pandemic – arise. We’re in a position to cherry pick only the best loans.”

By boosting its consumer loan division, BCA was better prepared to handle the financial fallout of the COVID-19 pandemic. “We didn’t suffer much at all,” Jahja reveals. “And we can still maintain the quality of our consumer loans. Right now, there aren’t many banks in Indonesia willing to step into the consumer loan arena because they can’t beat our pricing.”

The achievement is even more remarkable given BCA’s closest competitor, the state-owned Bank Tabungan Negara, has its loans subsidised by the government. “They are bigger than us, but if you exclude the subsidised loans, we’re the biggest,” he confirms.

“That level of growth is one of my proudest achievements and one that contributes a lot of profitability to BCA.”

Survival of the fittest

Growth and resilience are common themes in the BCA saga. The bank was 40 years into its journey when it was hit by the Asian financial crisis, an event Jahja believes pre-empted a rebirth of sorts. 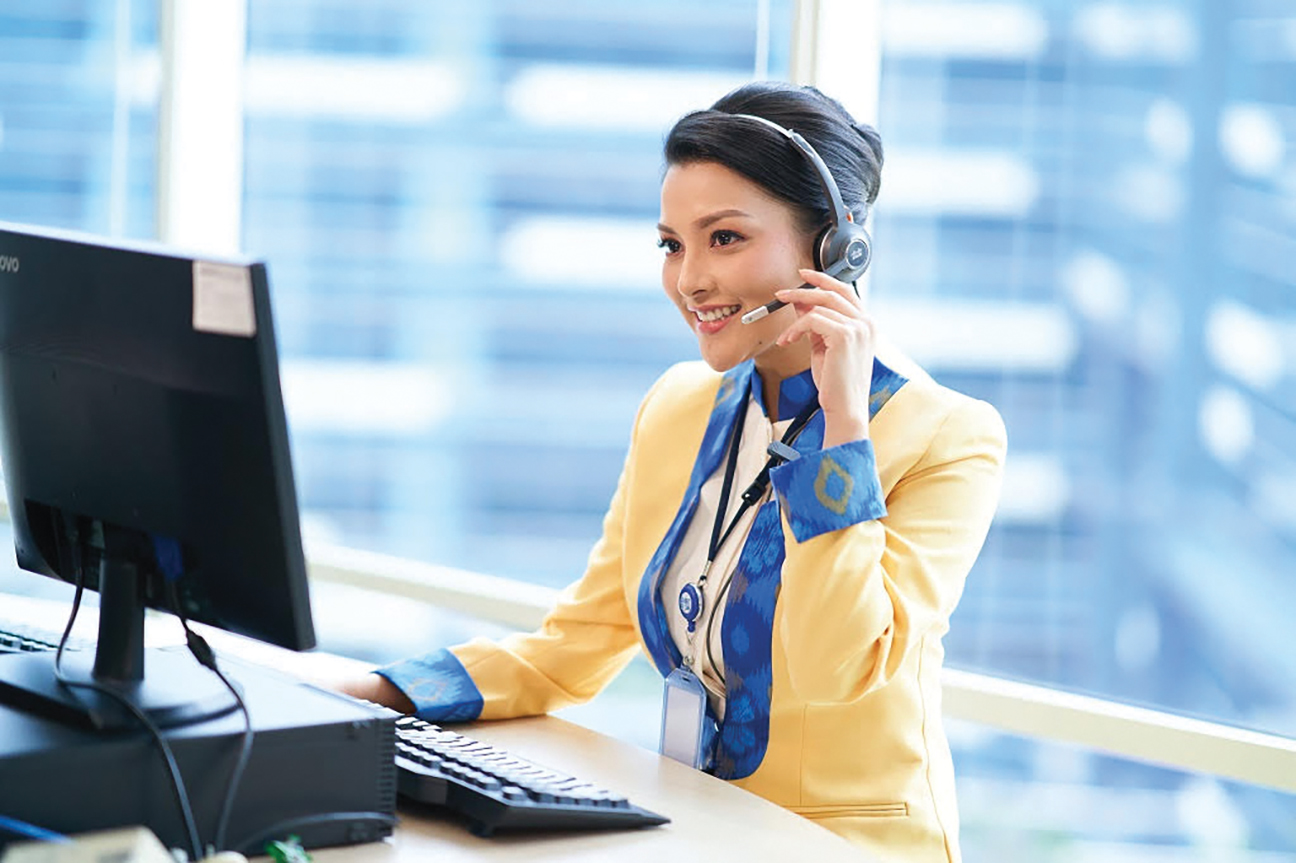 “We went from family-owned to being kept afloat by the government to semi-private and then semi-government in just a few short years at the turn of the century,” he says. Although the ownership turbulence seemed to end with BCA’s purchase by a US hedge fund, a second financial crisis threw it into uncertainty once again.

“In the wake of the GFC, they sold us to the Djarum family of Indonesia. Now they own 51% and the rest is public. In fact, we’re the biggest market cap in the Jakarta Stock Exchange.”

To remind customers and stakeholders present and future of this remarkable staying power, BCA has adopted the slogan ‘Always by Your Side’, a phrase bolstered by the more than 1,200 BCA branches across Indonesia.

“This is something that’s at the heart of our future focus, because sides aren’t what they used to be,” Jahja insists. As cash continues to give way to digital payments, the infrastructure to support them has become crucial.

MasterSystem Infotama is one of BCA’s major partners that supplies and integrates IT Data Center Infrastructure for more than 2 decades. – PT Bank Central Asia

“That’s not a problem in the big cities in Indonesia, but out in rural areas, it’s harder to get a signal,” he says. “We’re quite dominant in the cities, but if we want to reach the countryside, it’s a challenge.” On top of that, the changing nature of digital payments makes it harder to stay agile.

“Every time there’s a switch from credit cards to mobile payments to QR code transactions to whatever’s next, our systems have to be upgraded,” Jahja adds. “Millennial customers in particular are really in touch with these things, so it’s absolutely necessary to keep up.”

He believes that if you can change minds, you can change habits, though there are those who don’t want to change. “Those people we need to service as usual, so to cater to everyone is a bit more expensive than it would be for those banks that are purely digital.”

As the pandemic forced even more changes to the established ways of banking, BCA sought feedback from its customers on how it could best support them.

“In business, if you think you’re already right, you’re likely wrong. We should always ask customers for their opinions because they’re the ones who really feel it,” Jahja says, adding that this is why call centres are such valuable business tools.

“A 24-hour call centre is a rich source of fast, informative customer feedback. We’ve got a team of 3,000 taking around 50,000 calls a day. Some are complaints, sure, but many are seeking advice or education. Besides, the complaints are an education for us.”

Amid lockdowns, the value of the bank’s call centre rose exponentially. “We couldn’t do our usual promotions during COVID-19, so we tried to shift face-to-face deals and transactions to virtual settings,” Jahja says.

“The call centre helped a lot of customers who were struggling with small obstacles during that process, so we were able to improve it. Your customers keep you aware of what’s going on in your market; you need that inlet.”

Through this barrage of information, one clear message has emerged as a priority: digital payments will remain the bank’s focus for the foreseeable future. “BCA has to be a digital bank, that’s the most important thing for us,” he asserts.

“We’ll be looking at fintech – we have a sister company that’s a sandbox for fintech firms – but digital is our most crucial frontier. It’s our bread and butter.”

BCA’s formula for success is in no small part down to teamwork. Jahja has worked hard to eliminate silo culture, a departmental concept that is commonly found in Western companies which he believes is an unqualified detriment to business. “I don’t believe in silos,” he says flatly.

“In the past, BCA had leadership that pushed for silos so it could keep track of the performance of each and every department. I believe that in a bank, which is so complex and multilayered, trying to work in silos is slow, inefficient and will actively harm any effort to deliver the best to customers.”

Under Jahja’s leadership, teamwork and customer satisfaction have become the focus of BCA’s culture. “In the end, our customers need to be happy with our service,” he stresses.

“That’s how you breed loyalty among customers and it’s how you attract business without excessive promotion. You achieve this as a unit, every facet of the company working as a team. It has to be our culture and today, it is.”

BCA’s is also a culture of humanity. Aware of the common perception of banks as faceless profit machines blind to the human condition, Jahja makes a point of going against type, particularly internally.

“I’ll send personal messages to our regional managers, I’ll send them flowers and food just to let them know I care,” he says. When COVID-19 broke out in the country, several BCA employees were hospitalised; Jahja made sure these staff members were looked after. “I sent messages and care packages,” he reveals.

“And I think if you treat your staff like that, they’ll work with all their heart. If you treat them in a very businesslike manner, they’ll perform up to a business level only.” It’s a return to what he sees as the old days, when generals would run point with their armies into battle.

“If you believe your staff are your servants, you’re no general. A leader should stand shoulder to shoulder with their staff, support them with know-how and as human beings. That’s how, at least in my experience, you make amazing team members.” This is also closely aligned to Jahja’s firm belief in the value of future thinking.

“I believe great institutions are the ones that prepare the leaders of the future. It’s my time to prepare the future leader of this bank to follow up my policies and review my weaknesses and course correct,” he states.

Preparing a handover of an Indonesian banking giant is a long way from his humble origins in accounting, something that still plays on his mind from time to time. “I started my career as a junior auditor with PricewaterhouseCoopers,” he recalls.

“It was a very serious job and it led to a long career in finance and, eventually, banking. But I must admit it wasn’t the kind of job I enjoyed.” After 10 years as BCA’s President Director, Jahja has come to see the finance industry from a different angle. “I really enjoy talking to people, whether they’re customers or staff,” he says of his role.

“And in the latter case, developing staff. It’s the interaction that makes this such a fun job.” With teamwork and humanity as a foundation, he believes a company can do – or withstand – anything. “A bank is not more than its people. The biggest investment is always your people. I’d say it’s the secret to our success.” 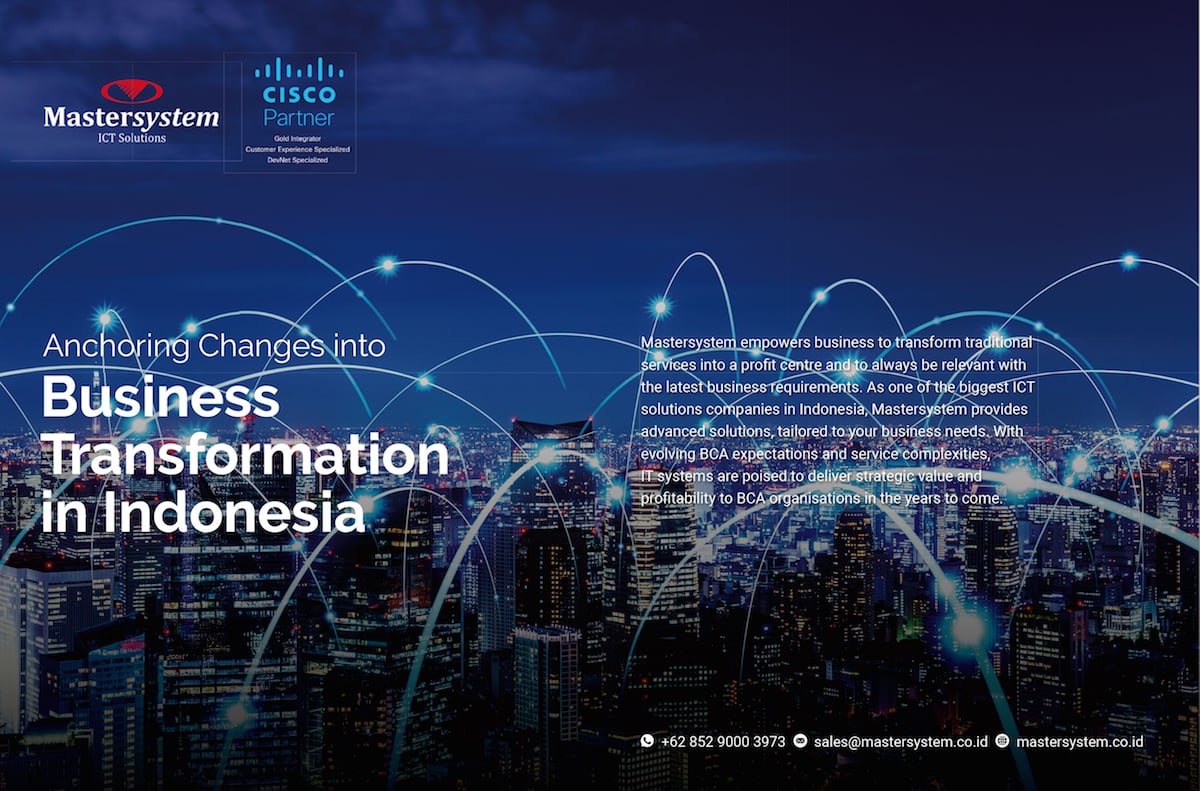 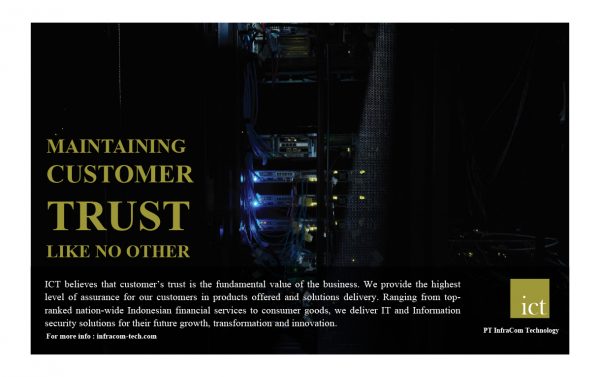 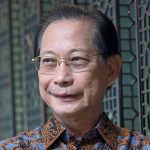