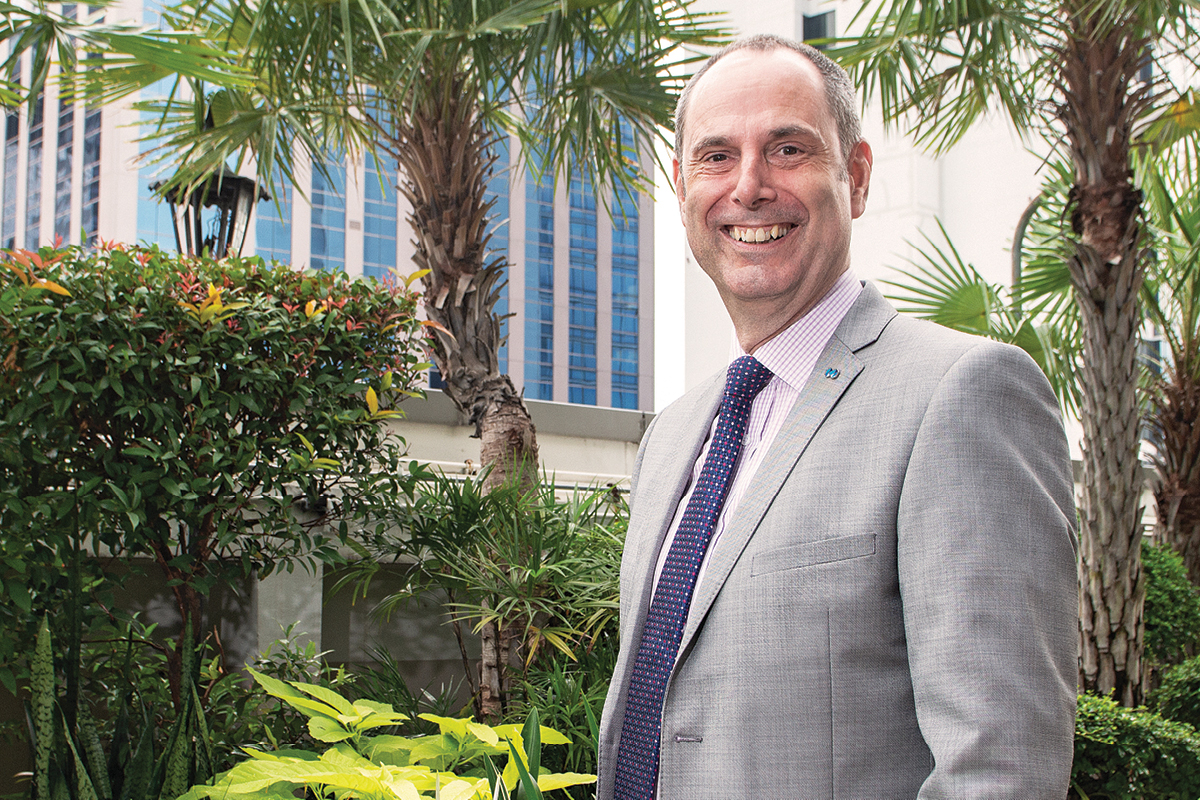 “I thought he was transformational in the way he led the football club from a period of being runners-up into being one of the best teams in the competition,” says Simon. “He’s no longer the coach, hasn’t been for many years, but the legacy he left behind is still being followed. And they’ve really maintained a very good culture within the club, and other clubs have sought to emulate the same model.”

For Simon, the qualities of leadership demonstrated by Roos transcend Australian rules football, and are informative for leaders in any field. For example, patience, sharing responsibility and rewarding good work are all qualities Simon has learned from the AFL coach. “It’s about being inspirational, having people want to work with you and want to follow your plan,” he says.

While Simon is from Australia, he’s now based in Thailand. He moved from Marsh’s South Australian branch in 2015, having been with the company since 1997. Initially, he was in Thailand to serve as the region’s General Manager, and the transition was not without its challenges.

“The Adelaide branch of Marsh is small, and based in a mature economy,” he says, “so I’ve come from a very low-growth environment in a familiar culture. Moving to Asia to work in Thailand was quite confronting in many ways, not just from a work point of view, but also in getting the family settled and all those sorts of things.

“It involved getting used to a new country, new clients, a new way of doing business and moving from a slow economy to a growth economy. It was a new market. I didn’t know the people or personalities at the insurance companies.”

Three years on, and having served as CEO since March of this year, Simon appreciates the opportunities Thailand has afforded him and the company. “Thailand’s in a lucky position,” he says. “We are a bit of a regional hub. We’ve got an established financial services sector and a hospital sector, for example, that support neighbouring countries such as Myanmar, Cambodia and Laos to some extent. It’s a more established economy here, and that presents a lot of opportunity for us.”

When Simon stepped into the role of CEO, he instituted a 100-day strategy to ensure the transition was seamless, for himself, and for the company. The plan emphasised visibility, and quickly establishing new, productive relationships with staff. Most importantly, it demonstrated that the company’s corporate direction remained unchanged and focused.

“Whenever there’s a change, you have to carefully manage it, as well as the perceptions of clients and colleagues about the change,” says Simon. “You need to make sure you quickly establish rapport and trust in the new role. That’s really been my objective for the team. I had the 100-day plan of how I was going to go about doing that, meeting with people, talking with people, being very visible, and I think it’s helped.”

“You need to make sure you establish rapport and trust quickly in the new role.”

Once the company has fully adjusted to the changeover, Simon’s strategy involves working on and improving the talent at Marsh. The company wants to bring in lots of experience, training and qualifications, which it will be able to do thanks to Marsh’s international network. The aim is to strengthen the entire industry in Thailand, by gradually improving the workforce.

“We’ll recruit young people,” Simon says. “We’ll train them up and educate them. We’ll give them experience, and then, as part of the next stage in their career, they will go off and work in the industry. That helps to circulate well-trained people in the market.”

Of course, Marsh can’t do this all on its own. Simon believes it needs to be an industry-wide initiative, regulated by the Thailand Insurance Brokers Association and supported by international companies with their considerable resources. He takes the view that it’s not about competition, but a collective effort to improve the Thai insurance sector. “I think we can work as an industry to share, train and contribute back to the insurance community here,” he says.

In pursuing this initiative, Marsh’s own status as a global company will certainly help drive Simon’s ambitions. Across the entire organisation, Marsh’s aim is to create a » uniform structure, one that is consistent between regional branches and operates efficiently as a single entity.

“Marsh will be pushing out a lot of new technology in the next 12 months,” says Simon. “We’ll have global platforms that are unified and consistent around the world, so that we don’t end up with different technologies in different countries. I think that will help us as an organisation to work not only locally but also in a network.”

This technological improvement will naturally help Marsh do business more efficiently and effectively, as well as help it keep up with a rapidly evolving industry. Cybersecurity, for example, is something Marsh is pursuing; the company offers risk management and risk transfer solutions to protect organisations from the rising costs of cyberthreats such as hacking or any disruption to IT services. In an environment where the average hacking incident is expected to cost US$150 million by 2020, this kind of service is crucial. 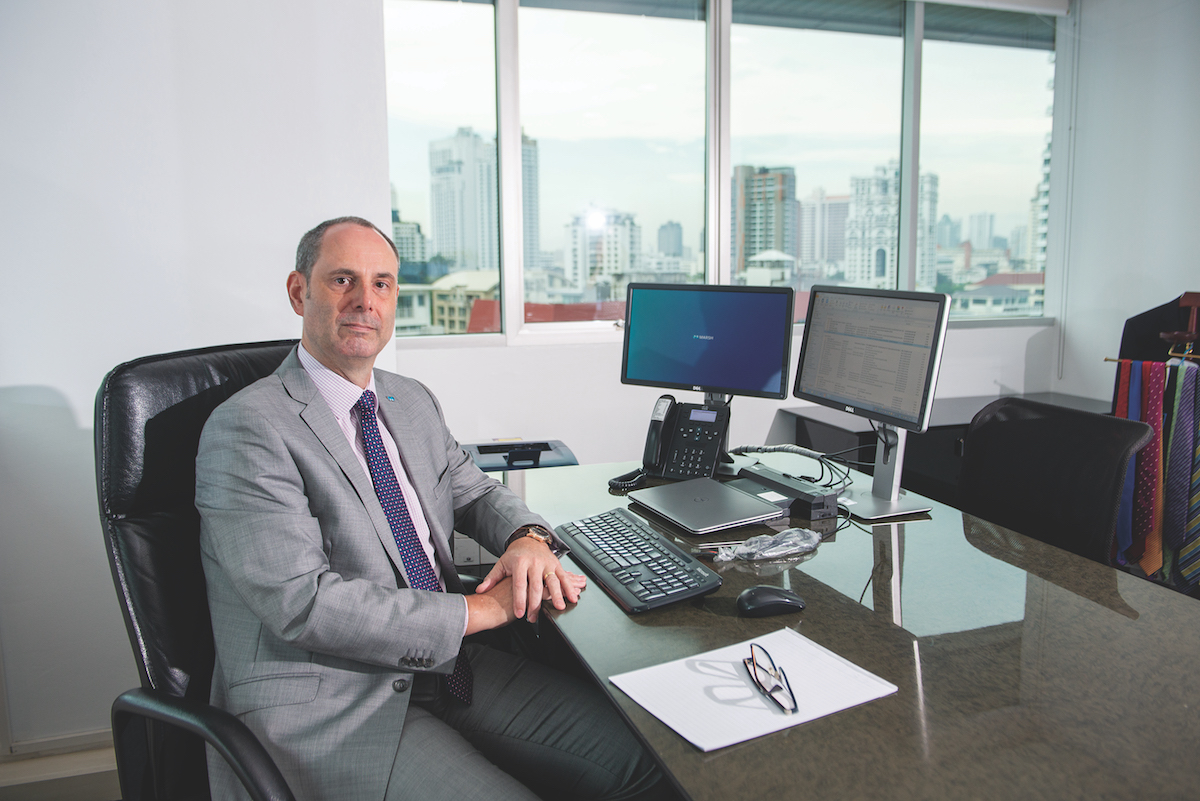 Company of the people

In May, Marsh Thailand and its employees helped construct mud-brick buildings for a rural Thai school. The company also made donations to the school, to help it set up a store to sell local produce. Simon highlights this as an example of how the company gives back to the community by focusing wholeheartedly on one cause, rather than contributing negligible amounts to many causes. This initiative is just one example of how Marsh endeavours to do what’s right, which includes the way it treats its employees.

“We do things in an ethical way,” Simon says. “We hold ourselves to a very high standard at Marsh. When people come into the company, we need to make sure they understand that.

“It’s not just about meeting regulatory requirements. It’s about behaving in an ethical, honest and community-minded fashion, so we do things like these community service events. They give colleagues a sense of where they fit in the community, and how we contribute and act as good corporate citizens in Thailand.”

“It’s not just about meeting regulatory requirements. It’s about behaving in an ethical, honest and community-minded fashion.”

This attitude extends to the way Marsh treats its suppliers; the company holds prospective partners to the highest standards, ensuring they are as dedicated to ethical operation as Marsh is. However, this doesn’t mean the company will cut off partner relationships at the slightest provocation. Its priority is maintaining productive business partnerships, and Marsh is willing to put in the work to facilitate this.

Similarly, Simon is prepared to work on his own leadership style to better serve Marsh Thailand. “As I’ve moved through the ranks over time and become more senior, my style and personality have had to adapt and change a little bit,” he says. “Some people have perceived that I can be a little bit impatient, and I’m now aware of that. It’s a bit of a blind spot that I can now see. I try to be more patient with people, to be an active listener and not talk over the top of others.”

The result is a company that is attractive to employees and partners, both current and prospective. “Outside the company, people look to Marsh, and say, ‘Wow, that’s a place that I’d like to work in and be part of that success story’,” says Simon. “That actually helps to snowball the effect. Clients want to come to us. But I don’t want to be arrogant about this, because you’re only as good as your last game. You have to keep maintaining the efforts and fine-tuning the strategy.” 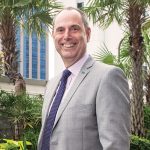