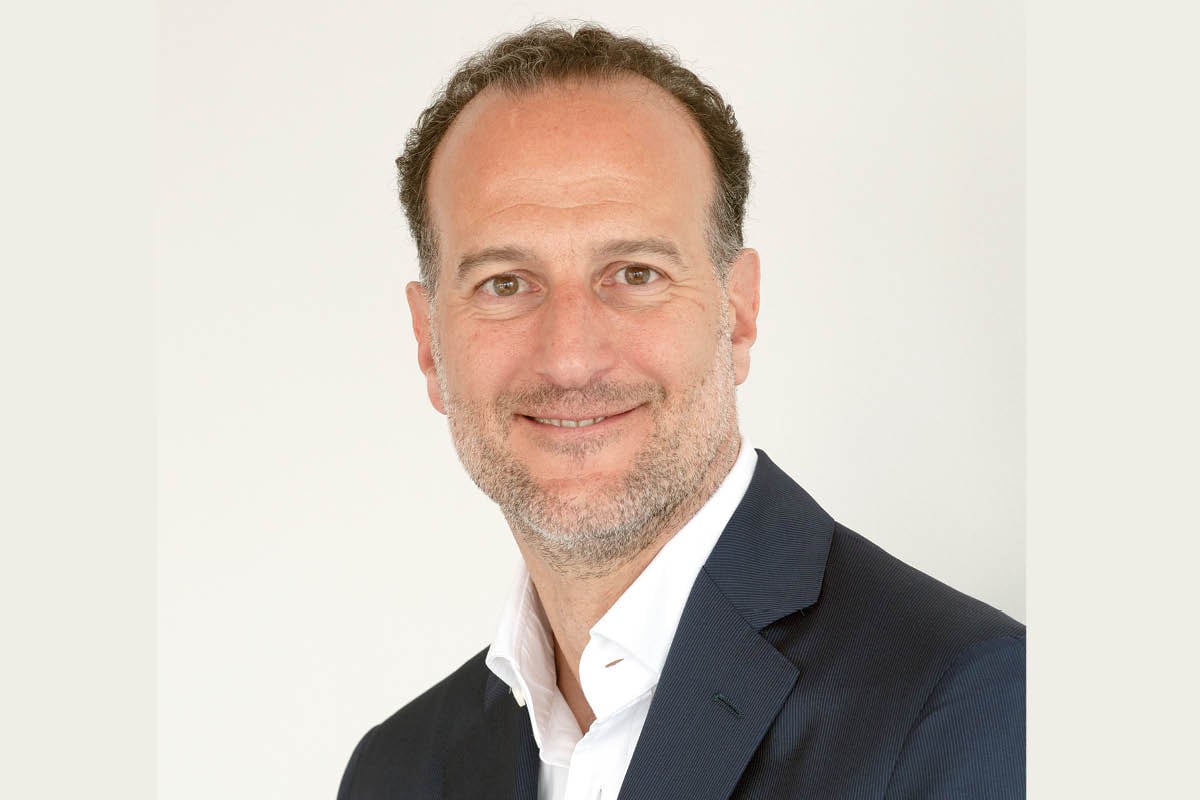 Out of the 35 countries in the OECD, Italy suffers one of the highest rates of youth unemployment, comparable only with that of Spain and Greece. In 2014, it hit a peak of 43%, and since then has only dropped to 35%. Against the backdrop of a volatile European market and a brief electoral crisis that saw a move away from the political and economic norm, Italy’s employment rate remains less than ideal.

But there are some, like the CEO of KFC Italy, Corrado Cagnola, who are doing what they can to remedy the situation. “Italy is still one of the worst European countries in terms of unemployment generally, and especially for young people,” says Corrado. “We are generating 35 jobs per restaurant, so that means some 1,000 jobs created between now and 2020.”

In aid of this job creation, KFC Italy is welcoming employees who might not have any experience, with the proviso that they are willing to learn and serve customers. Though KFC only opened its doors in Italy a few years back, the number of franchisees is swelling rapidly.

The quick service restaurant chain’s efforts to hire inexperienced young people will therefore have an increasingly positive effect on the country’s economy. Corrado doesn’t think KFC’s influence is limited to youth employment either. “Each restaurant is an investment of around €1 million,” he says. “That’s money that is generated and spent here in Italy, with Italian partners. When you buy land, when you construct the site, when you put the kitchen in, when you put furniture in, and when you manage it, that’s investment.”

As part of a massive global corporation, it’s to be expected the company relies, to a large extent, on international, large-scale partners. However, KFC Italy is looking to continue its investment in the country by increasingly doing business with Italian partners. Unfortunately, this can make operational matters a little more complicated.

“There’s a need to align what we do at the European level with what we do at the national level,” says Corrado. “Most of our partners are not Italian partners, so we have to ensure that what we ask for is no different from what France or the UK or the Netherlands are asking for. Otherwise it becomes confusing.”

At present, local partners account for around 30% of KFC Italy’s partners, though Corrado wants to up this to 40% by the end of next year, and 50% by the end of 2020. Italy is, after all, a relatively new market for KFC. Given time, the company will come to champion a proudly local supply chain, which, as well as supporting the Italian economy, will also help KFC Italy to become more independent from other national economies, and simplify its processes.

Of course, a focus on local partnership isn’t the only criterion Corrado applies to KFC Italy’s supply network. The strength and quality of KFC Italy’s partnerships is crucial to the company’s continued success. Corrado believes there must be mutual respect, trust and reliance, and both parties must recognise each other as important.

“We don’t need suppliers,” he says. “We only need partners. So, how do I define a partner? The first essential quality of a prospective partnership is alignment with our core values. When we get in touch with companies providing something we need, we first have to agree on the reason why we’re here, how we’re doing things, how we’re treating people, how we’re relying on each other, and how important we are to each other.”

“The first essential quality of a prospective partnership is alignment with our core values.”

This approach has proven necessary due to KFC Italy’s business model, which demands a deeper than usual involvement with partners. Corrado describes KFC Italy’s aim as one of “integration”. “The second essential quality is the ability of our partners to provide services, not just products,” he says. “This is because in Italy we’ve chosen to have a lean organisation. That means everybody working with us is also providing a service.”

This deeper relationship extends to involvement with new store openings, for feedback and suggestions. It also includes a thrice-yearly meeting with KFC’s partners, in which the company shares its goals and plans over the next three years. The fast food retailer has many objectives to be achieved by 2020, not least its goal of forming partnerships with more Italian companies. KFC Italy also hopes to have 100-plus stores by 2020 and, with 25 stores at last count, there’s a long way to go. For this reason, Corrado hopes to move the company’s partnerships beyond just consultation, encouraging partners to help drive innovation at KFC.

“If innovation is to be disruptive, it cannot come from within,” he says. “We cannot disrupt ourselves, but our partners are usually very good at that in terms of equipment, construction techniques, products, ingredients and technology. They are usually much better than we are at that. So by the end of the year, we are going to have an Innovation Day with our partners, where I’ll ask them to come and tell us everything they can think of that could apply to our business.” 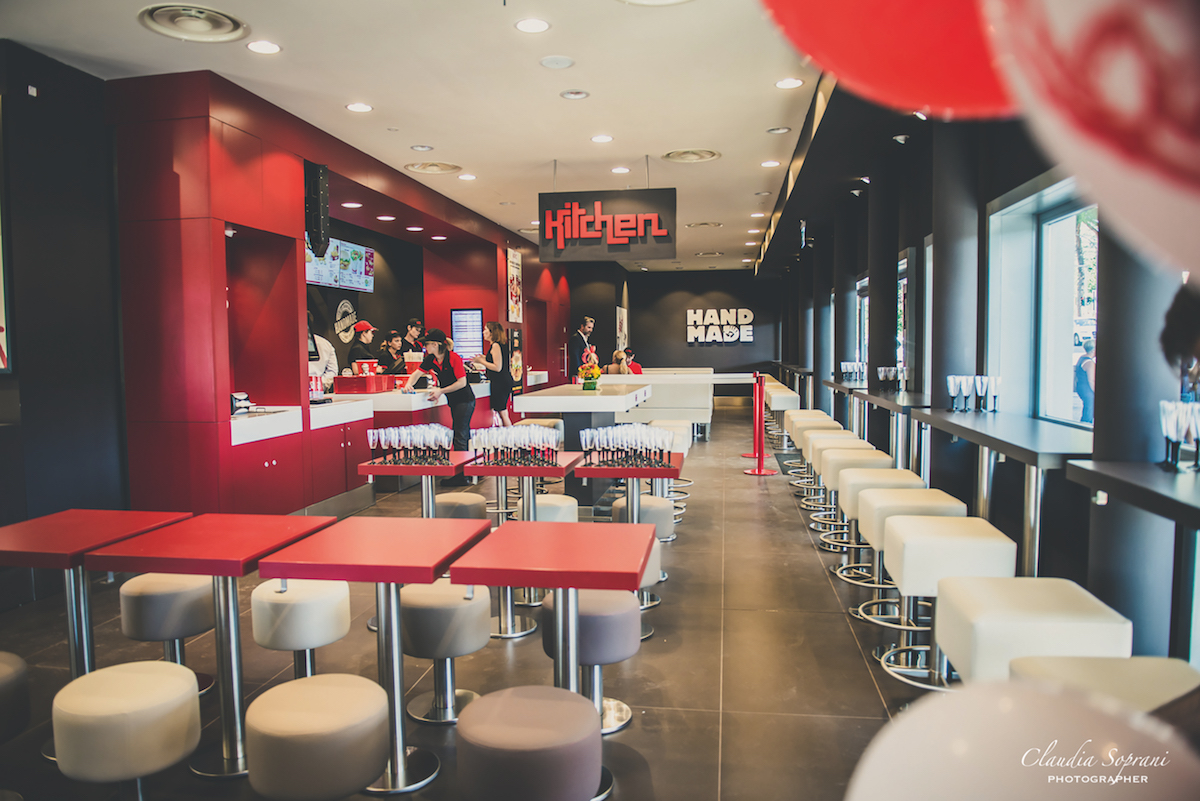 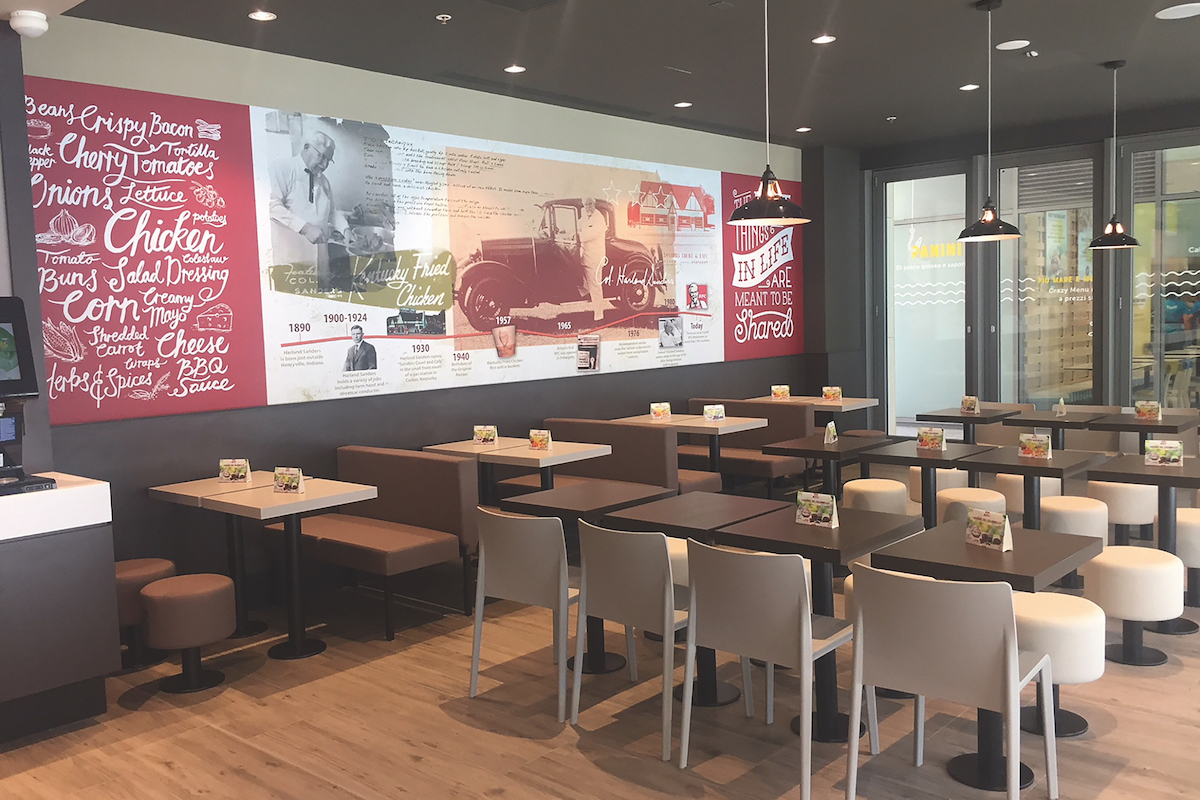 KFC only opened its doors in Italy towards the end of 2014, starting in Rome and then Turin a week later. Since then, the QSR giant has been moving cautiously. Corrado says it is only opening in locations it knows it can trust, since it relies on restaurants being successful (which, to date, they have been).

“We let a franchisee work alone in an area, without competition from other franchisees,” he says. “Maybe 10 years from now competition will make things more interesting but, for now, I think franchisees deserve to work as if they were a small company with exclusivity in their area.”

It’s difficult for the company to say no to potential locations, but when Corrado thinks back to November 2014, he can still recall the uncertainty of that time. He remains thankful for the risk the early franchisees took, since there was no assurance that KFC would find purchase in the Italian market. After all, an earlier, abortive attempt in the 1970s saw an outlet open briefly in Naples, with nothing more until 2014.

“We had to rely on business models that were proven in 130 different countries around the world, but weren’t proven in this country,” he says. “Of course, our own business model was building itself as we went along. But, because there are different P&L lines in every country, we had to open that first restaurant without knowing how much the cost of sales would be in Italy.”

Corrado’s early life was just as crucial in the creation of KFC Italy as those first few outlets. Rather than studying business or economics, Corrado started out as an engineer which, he says, gave him a good head for numbers, as well as teaching him the importance of numeracy in daily life. It’s helped his critical thinking, too; whenever he has a problem to solve, Corrado tries to distil it into its basic figures, so that he can look at things objectively. There are, after all, few disciplines as objective as mathematics.

The other lessons he learned at an early stage focused on leadership. “I spent my first years learning how to manage people, how to support them, how to coach them,” says Corrado. “That’s what made me realise that you can’t get anywhere without people and you can only reach great results through people. So those were the real basics that informed the following 15 to 20 years.”

The former head of McDonald’s Italy, Mario Resca, under whom Corrado worked, was probably his greatest inspiration. “Mario Resca taught me one very important thing: that you can have fun at work,” Corrado says. “He was always having fun, even in the face of serious problems. He always took the time to have a relaxed moment, to make a joke, because it loosens the tension and refreshes your perspective. After three years, I realised that it was very beneficial for me. Maybe it isn’t beneficial for everyone, but to me it was.”

“Mario Resca taught me one very important thing: that you can have fun at work.” 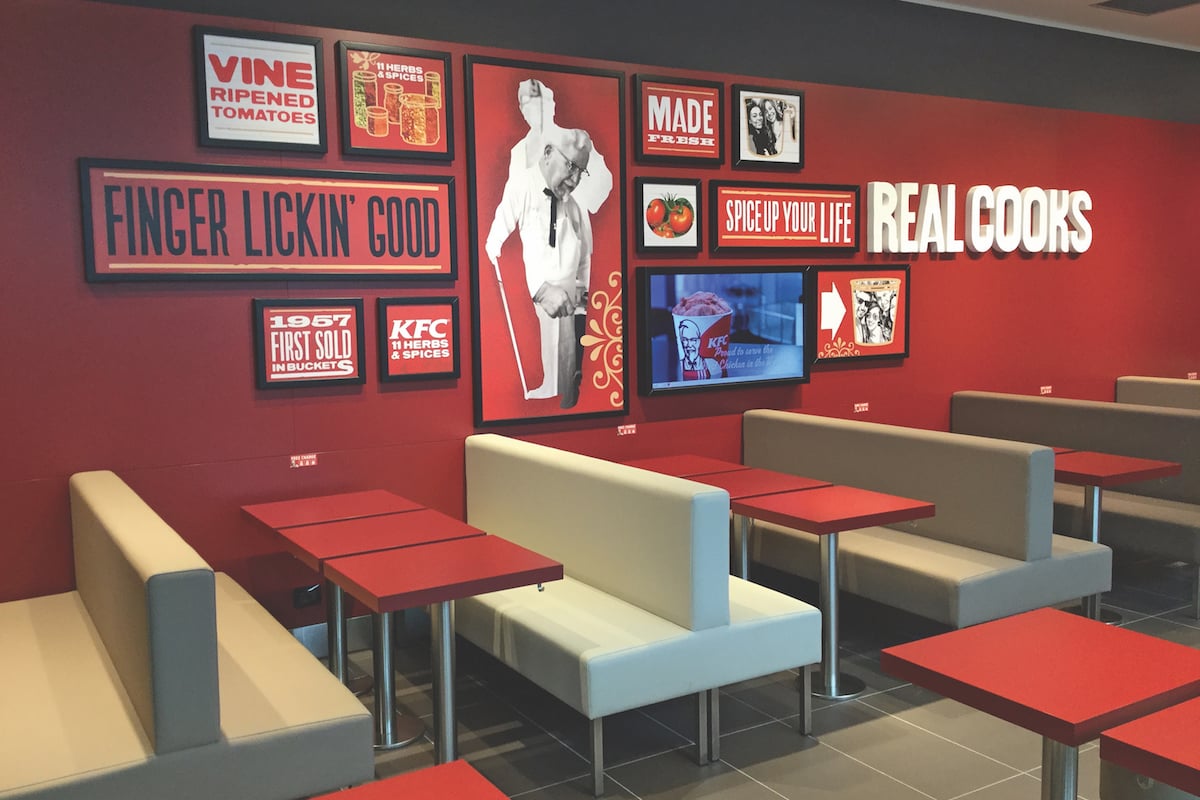 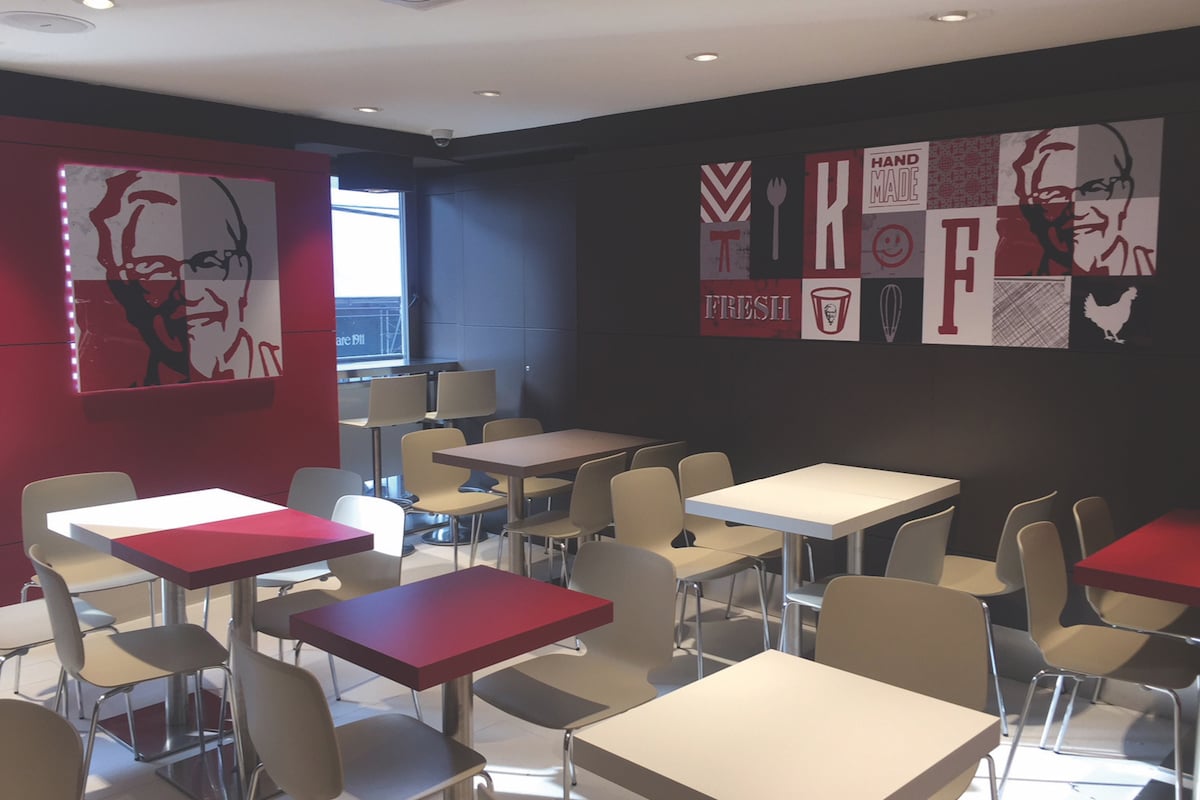 Not one to squander the lessons he learned from Resca, Corrado has endeavoured to maintain a friendly, supportive leadership style. More than this though, he takes inspiration from the way KFC Italy’s support of its team improves their skills and experience. KFC Italy therefore ensures that career opportunities and development are available to all staff, going so far as to offer the option to transfer to different regions of KFC and work abroad.

“They want to change jobs, they want to travel, they want different opportunities, they want to move to another country,” Corrado says. “Giving them this chance is something that I take pride in, something that gives me motivation every day. That everybody who comes here can achieve their goals, big or small, makes me very proud. That brings me to the office every day. It lets me wake up happy and come gladly to work.”

“That everybody who comes here and can achieve their goals, big or small, makes me very proud.”

In giving its employees these opportunities, KFC Italy expects the best from them in return. To ensure this, the company encourages employees have a personal relationship with their managers. “One of our mottos is ‘Be your best self’,” says Corrado. “It means I have to get to know you to understand if you’re being your best self. And if you’re not, you have to change. So it’s something that is very personalised, and it’s something that we apply every day, from myself to everybody else who has a relationship with colleagues.”

To further the abilities of its employees, KFC Italy has partnered with a local training academy to provide vocational education. There are around 55 different courses available to all staff at KFC Italy, covering a wide range of specialty areas. Technical courses are available, but the academy also offers education in management, public speaking, presentation and more. This, says Corrado, is because the company recognises the individuality of its staff members; again, he wants the employees’ experiences to be personalised to their needs.

As well as training, KFC Italy also benefits from global summits, where team members meet with their counterparts from other regions. The company recently held a marketing summit, while Corrado himself attended the International Global Franchise Convention. KFC plans to hold many more summits and conventions for different divisions in the future.

“We will have the development summit in September,” says Corrado. “We put people together – same division, different parts of the world – and we exchange experiences. I think it’s extremely enlightening for anybody who works in a corporation to understand how similar problems are all around the world and how much you can learn from your colleagues.”

Closer to home, KFC Italy’s head office goes offsite for a few days, twice a year. They work in a more relaxed location, perhaps out in the countryside. In effect, it’s a work holiday, but more than that, it’s a chance for Corrado’s management team to improve their interpersonal relations, in much the same way the company works to build on the skills and experience of its employees.

“Of course, we still have to work,” he says, “but we get to know each other better and we understand how our professional relationships can be stronger than they are now. It’s a never-ending process. There can never be too much communication, and relationships can always be made stronger.” 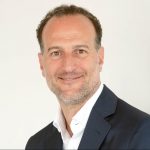