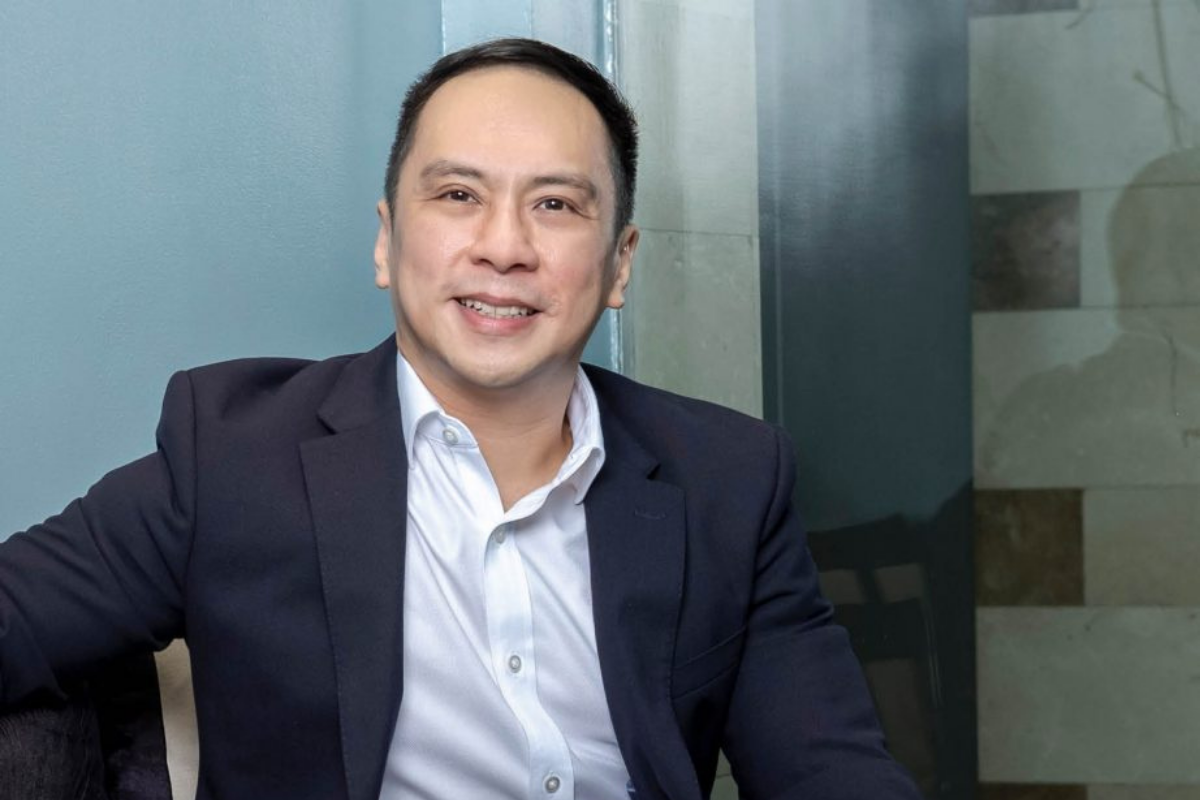 The art of competition has become second nature to Ronald Agoncillo after many years of practising taekwondo, with 10 of those as part of the Philippine National Team. Immersed in the sport for so long, he has developed a profound understanding of the intense preparation required to enter a competition and win.

So when he took on the new challenge of building up Century Pacific Food’s dairy business, Snow Mountain Dairy Corporation (SMDC), he was able to repurpose these invaluable sporting insights to the company’s advantage, readying it to take on its larger rivals.

And take them on it has. When Ron took on the role of Vice President and General Manager in 2017 after eight years on the company’s sales side, SMDC was significantly smaller, working in the shadow of the huge multinationals that had long ago laid stake to the Philippines. Although it was a minor player, he could see the possibilities. “I knew it could be very big because the category that we play in is really huge,” he recalls.

His hunch paid off. While Century Pacific Food is now one of the largest branded food companies in the Philippines, its dairy business is also gathering force, against the odds. “We’re competing with large multinationals, so we’re competing with the giants,” Ron tells The CEO Magazine.

“We’ve tripled the business in three years and actually almost quadrupled it in four years. Dairy was one of our smallest business units before and now it’s one of the biggest. We’re growing about 30–40% year on year. Our market share has grown tenfold in less than three or four years and we are now a strong second player in the category.”

Ron explains that there’s still a lot of space to grow in this particular field. “We will strengthen the base and continuously improve,” he says. 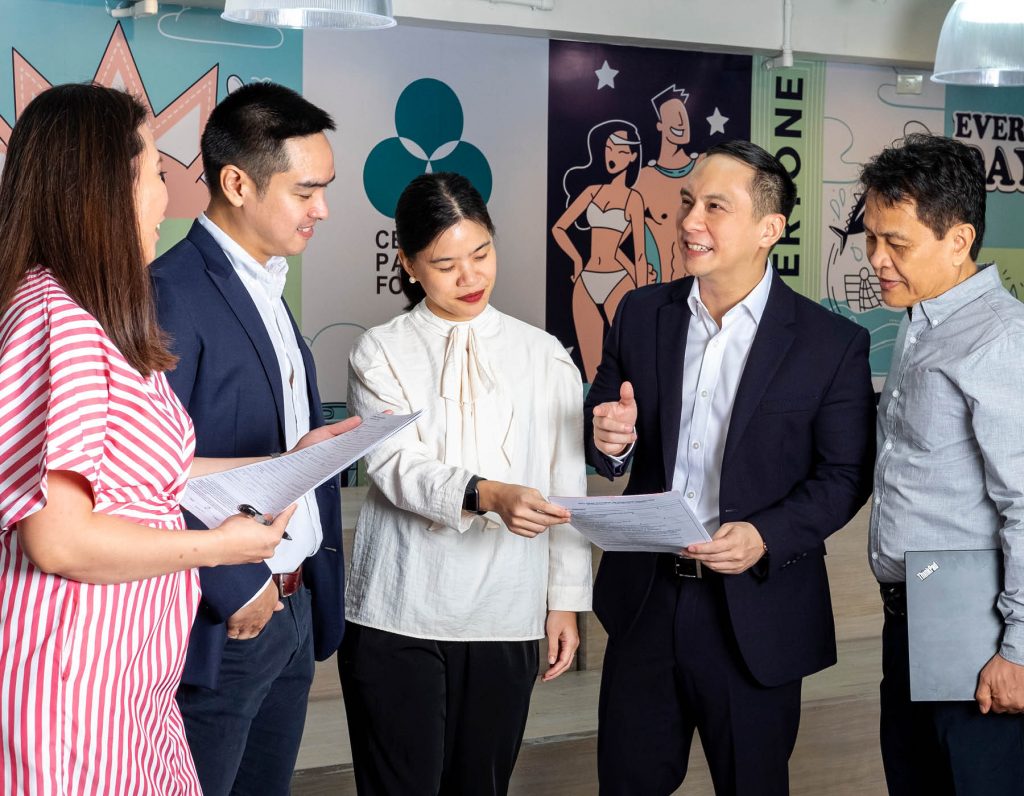 After joining the company in 2009, Ron set to learning the business inside out, moving from a functional role to a general management role. “The challenge – and opportunity – was to really immerse myself and learn the different functional disciplines – that’s the only way,” he asserts. “I knew that if I didn’t learn each function, I wouldn’t be able to help the team. So I made sure to listen, learn and connect everything.”

Ron’s former experience as an athlete helped to shape his leadership style. “I think one of the best ways to learn leadership is not always in a corporate set-up, since some people will follow the boss because they’re paid to do so. In a sport set-up, you do it because you’re passionate about it,” he explains.

“That’s how I look at people, developing individuals like athletes. You have to train 90% of the time in order to fight 10% of the time. So it shouldn’t be that different in the corporate world. Training and constant learning are always there. I always say develop people to be better than you.”

I always say develop people to be better than you.

The biggest challenge the company faced, and still faces, is its access to fewer resources compared to the competition. “We’re fighting against the biggest food company in the world, and one of the biggest dairy companies,” Ron stresses.

But when he first came on board, Century Pacific Food was not a dairy company. Its business was mainly canned food – tuna and meat – and he knew the company couldn’t simply “cut and paste” when it came to its new dairy business. “Canned food operates so differently compared to the milk category,” he says. “We need to understand that the terrain is different.”

It was a daunting challenge that Ron, with “zero knowledge in dairy” but strong competitive instincts, relished. “It’s really about learning and managing very few resources. We have to be very selective. I think that’s the challenge moving forward. But it also gives us a competitive edge, as it means we have to be entrepreneurial,” he shares.

Century Pacific Food is the first Filipino company Ron has worked for, having previously been part of leading multinational organisations in fast-moving consumer goods. He refers to that experience during brainstorming sessions to devise strategies the big players won’t expect. “We adopt a sniper more than a shotgun approach,” he reveals. “The challenge for us is to make sure that we’re faster and more agile, even though we’re smaller. So it’s really looking at our team as corporate athletes – you need to build your stamina, speed and power.”

The other part of the company’s strategy is to stay on top of industry trends and shifts in the landscape. “We have to always be conscious of how the terrain changes,” he insists, highlighting the COVID-19 pandemic as a perfect example of this shifting ground.

“It was a shock for the whole world, so we needed to really adjust quickly. Health and safety became the primary focus. While we had to switch to a work-from-home set-up for most of our people, we couldn’t bring the manufacturing plants home, so the team had to operate amid this particular pandemic.”

As a result, Century Pacific Food invested in personal protective equipment, vitamins and transportation for its staff. “There were a lot of costs that we put into it, but we know that when we take care of the people, they’ll take care of the company more,” Ron says.

There’s no doubt that the pandemic brought about seismic shifts in consumer behaviours. “People became afraid to go out,” Ron says. “They went out less and started cooking and dining at home more. Many lost their sources of livelihood. Mobility was disrupted. All these factors significantly altered their purchasing behaviors, so we had to adjust quickly to that. For example, we put more focus on our culinary range and built up brands like Angel.”

Indeed, COVID-19 appears to have been good for Century Pacific Food as demand for its products surged while people quarantined at home.

However, it wasn’t all smooth sailing. As the supply chain got “crazy” and raw material prices shot up, the company had to swiftly decide on its plan and act in order to adapt to the pandemic’s opportunities. “I really believe that everything can be learned, especially as we can easily access information. The real competitive edge now is the speed of learning,” Ron says. 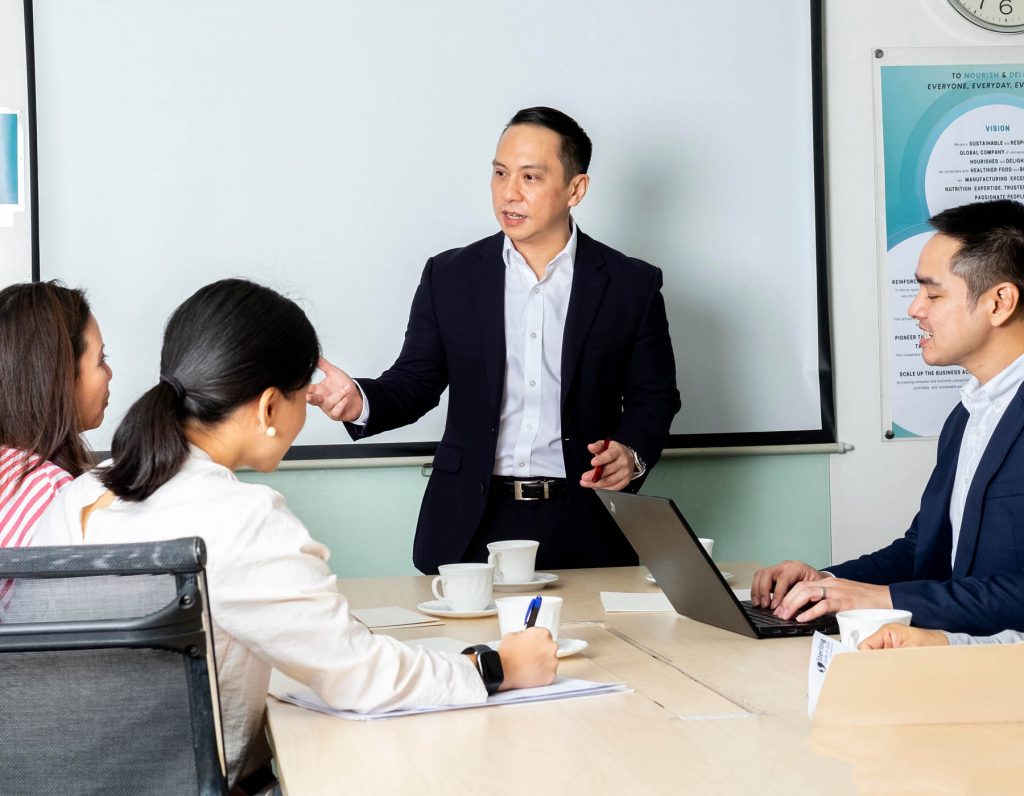 “We go for progress more than perfection,” he says. “We don’t wait for perfect, complete information because by the time we get that, the situation could have changed.” Instead, the company adheres to a principle called “sense-making”. “That means having just enough information to make a quick decision and if you make a mistake, you pivot right away.”

Even in the midst of the business uncertainty due to the pandemic, Century Pacific Food made what some would consider ‘bold moves’, introducing new products under its mainstay Birch Tree Fortified powdered milk brand. “I think we’re one of the few companies who launched during the pandemic,” Ron reflects. “True to our mission of providing affordable nutrition, we launched Birch Tree Fortified Adult Boost, an affordable immunity-boosting drink for working adults. This innovation saw immediate market share gains.

“We were especially passionate about this because we felt that people urgently needed this product particularly during this time. We want to be the most innovative maker of dairy products that will challenge and improve the way consumers eat, drink and live,” Ron adds.

We want to be the most innovative maker of dairy products that will challenge and improve the way consumers eat, drink and live.

In addition to innovation, ensuring it is delivering value for money is also a priority for the company going forward. “Value is often misconstrued as just dropping the price,” Ron points out. “That’s not always sustainable. We believe in creating value – giving more to consumers in terms of volume and nutrition but still keeping prices within reach.”

Underpinning all of this, however, is the company’s team, with Ron deeply committed to instilling a “we before I” culture. “Just because you have X number of people, doesn’t make it a team,” he explains. In order to develop a strong culture, the company places great emphasis on training, adopting the Kaizen principles of continuous learning and improvement.

Ron has also examined the concept of leadership to make it more relevant to the company’s employees. “Leadership is such a misused word,” he says. “One of the first things I did was define what leadership means to all of us. We just simply put it into three things: it’s how we deliver results, how we develop individuals, and how we form a team.”

All of these factors have combined to drive SMDC forward, helping to level what was an uneven playing field in the face of stiff competition. And now Century Pacific Food can say it is truly a dairy company among others, and one that is fit to play with the giants.

“We are truly proud of the partnership we have developed with Century Pacific Food during these past years. Through further collaborations, we hope to contribute to consumers’ nutrition, health and enjoyment of food.” Shin Kojima, Managing Director, Lacto Asia
“With more than 20 years of supplying high-quality dairy ingredients to Century Pacific Food, Fonterra’s desire is to continue to be part of its dynamic growth and goal of nourishing Filipinos daily with the goodness of dairy nutrition.” Maria Teresa Jusay, Country Sales Manager, Fonterra SEA 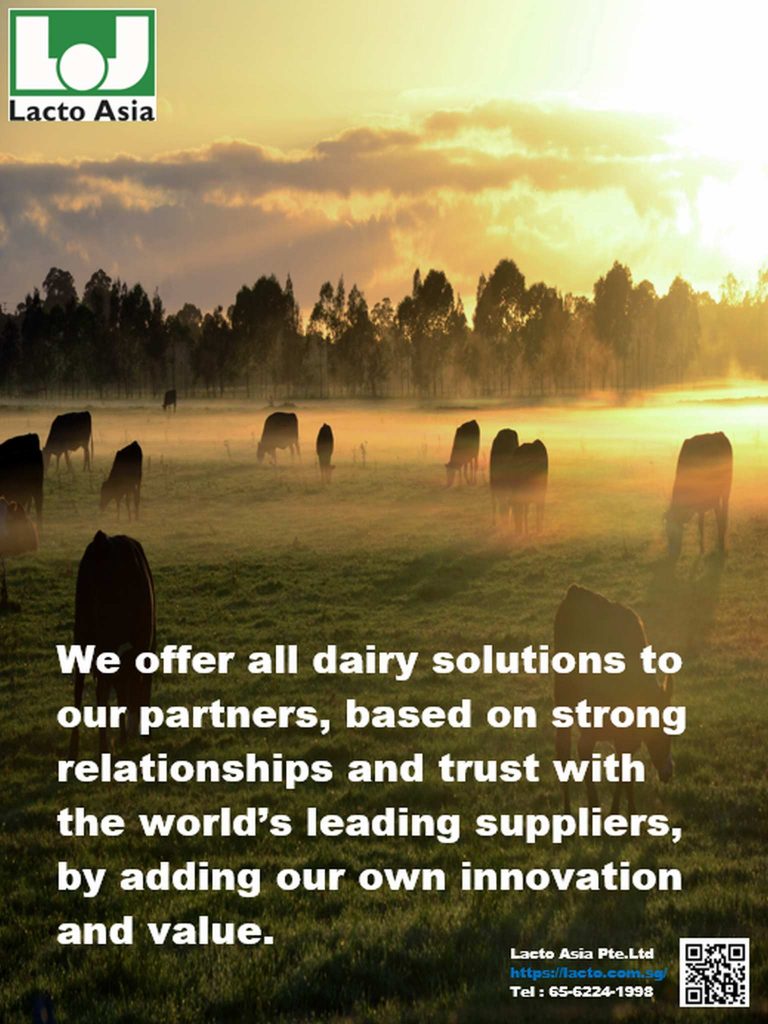 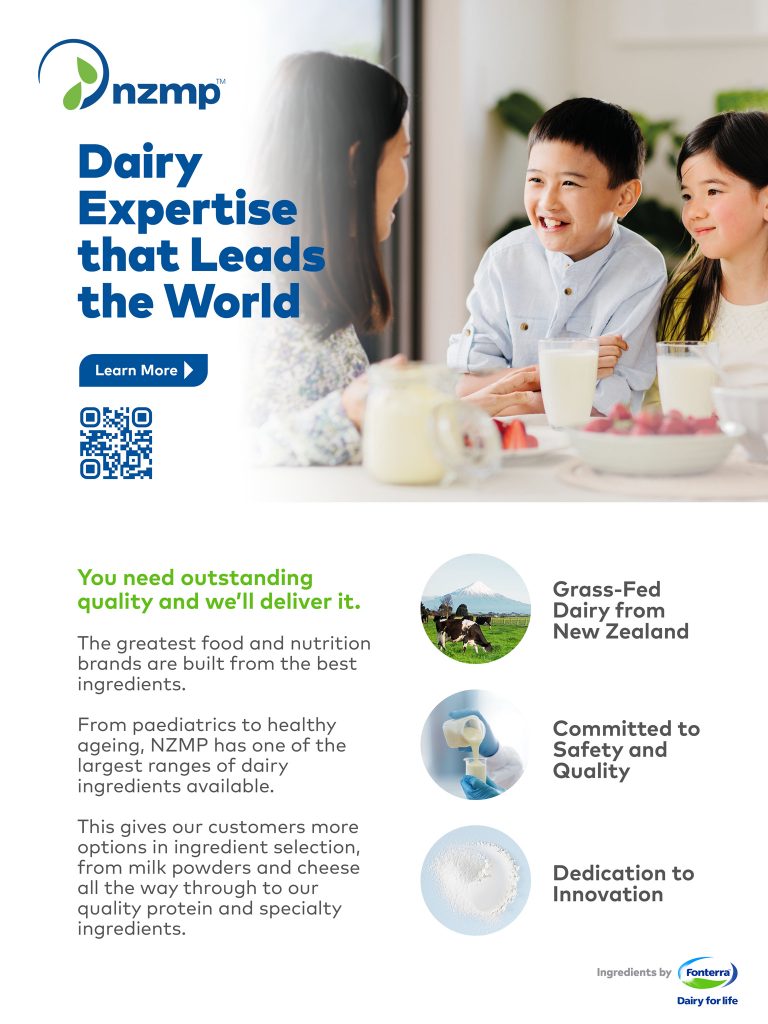