Ekrem Özer became used to the alarmed, one could almost say panicked, glances thrust his way from staff when he strolled into his local Burger King restaurant. After all, he was the new China boss, overseeing a staff of more than 25,000 and more than 1,000 Burger King outlets.

It was only natural that eyebrows would rise when the CEO would pop in with the family to grab a burger from the store nearby his Shanghai home. What they didn’t realise is that their boss simply liked to eat burgers. Burger King burgers, to be precise.

“My wife, daughter and I live very close to a Burger King and we are frequent visitors,” he explains. “At first, the crew was very startled when we came in and the visit was usually followed by a phone call from our COO asking if something was wrong. But, no, I just wanted a burger. I like burgers!”

Ekrem has held the top job since January after working for six years at Tab Food Investments (TFI), Burger King China’s parent company, in his hometown of Istanbul.

He completed a business degree at the Indiana University, working in major accounting firms including PwC UK, and Ernst & Young, before joining TFI as its CFO in 2013, just a year after the company began investing in Burger King China.

“I had been following the Chinese operations quite closely and went to China pretty much every quarter during those six years,” he says. “But it is completely different once you take a physical role here and start immersing yourself in the culture, the market and the environment.

Since TFI invested in the chain seven years ago, Burger King has expanded from 65 stores to opening its 1,000th store in December last year, an average of one restaurant launching every three days. It’s phenomenal growth and an impressive achievement that Ekrem admits was a little daunting for him when he came on board.

“It’s not always easy to join a company enjoying enormous growth,” he says. “With an already very extraordinary track record of expansion and a great story behind it, it’s quite challenging to build on that story.”

Ekrem’s only option was to hit the ground running, maintain the momentum and increase the healthy foothold Burger King has gained in the market. That means doubling the number of stores over the next three years to more than 2,000 outlets and 50,000 employees. On the surface, his strategy to entice customers into stores is quite simple. It’s a look behind the scenes that gives an insight into how much complex planning is involved to encourage customers to bite into a Burger King burger.

“We have to integrate ourselves into the consumers’ lives.”

“That means catering to their taste and innovating to create whatever taste they want. This also includes offering lifestyle choices, such as healthier food, or specific food meeting dietary requirements.”

Convenience is another essential factor in the drive to get hungry customers into restaurants, and that includes constant research on market sizes in various cities to determine how many stores will be built.

At the beginning of each year, a development plan is presented with a team of 100 tasked with scouting precise locations in each city. “We have a very dynamic market structure here with all the major players,” he says. “Competition is tough and we’ve got a very demanding consumer who keeps us agile and on our toes.

“We have to be conveniently located for our customers and, considering the size of China, that means huge expansion. Once sites are approved, construction starts with the opening following 60–90 days later.”

Naturally, convenience extends to operations inside the restaurants with technology playing a huge part in enabling faster and more efficient service. Home delivery is huge, with select stores delivering around-the-clock service for those who want to order online, while instore service is also dominated by technology.

“In China, a third of customers order online, 10% of those instore order through menu apps, while others use the self-service ordering kiosks,” Ekrem says. “Then you have a massive 90% paying via their digital wallets through Alipay and WeChat Pay.

“The next five years will be much more focused on technology and how we can further adapt ourselves to the preferences of the customers.” Ekrem believes Chinese consumers have not only caught on quickly to the Burger King concept of reliability and delivery, but have also learned to appreciate the unique flavour flame-grilled burgers offer. 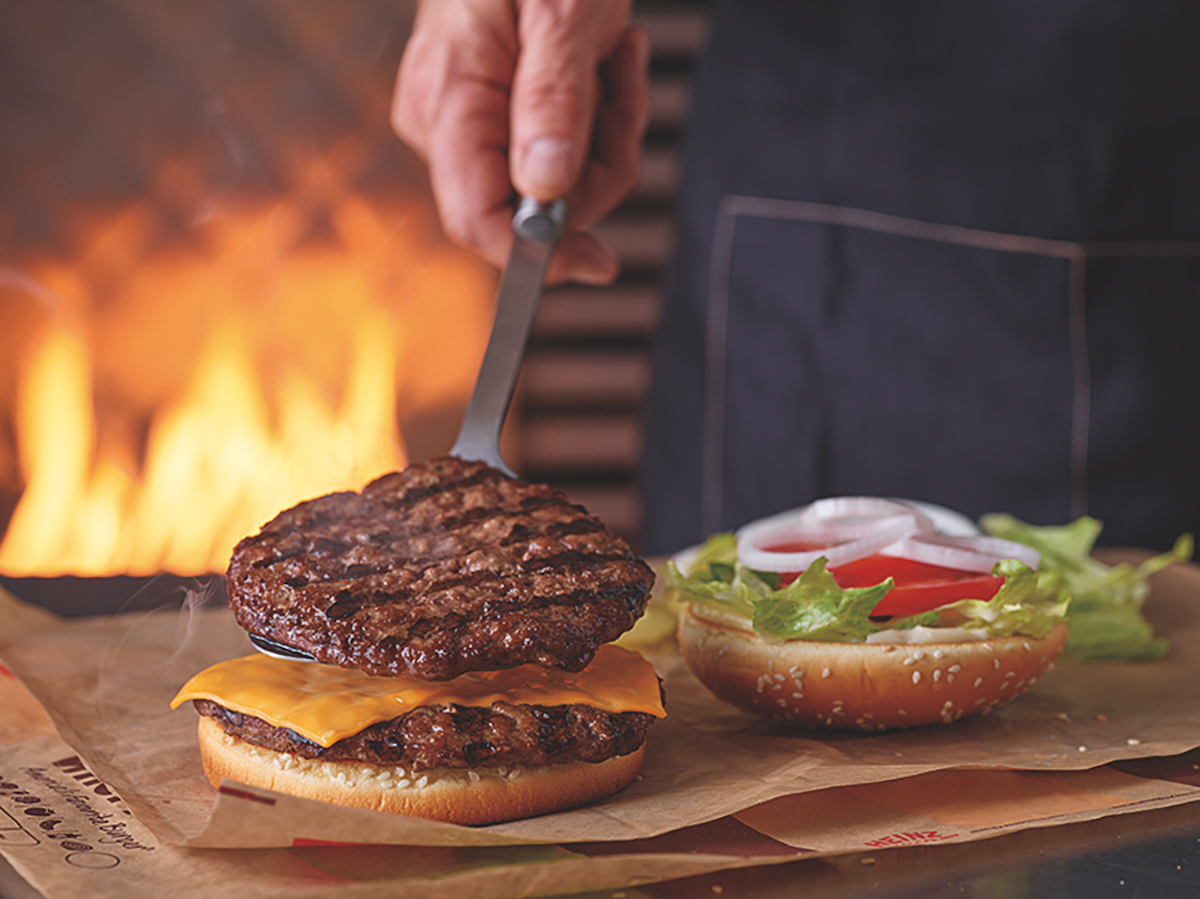 The company’s signature and very global burger, the Whopper, is delighting Chinese tastebuds, but the addition of more local flavours has proved equally successful, such as Ekrem’s personal favourite, the Fruitwood Grilled Chicken Burger.

“Yes, I’m a fan of the Whopper, as most people are, but there are local Chinese flavours I don’t get to eat anywhere else, so I tend to go for those. The very juicy Fruitwood Grilled Chicken Burger is a bestseller, as is the juicy and special flavour Fort. “Flame-grilled, as opposed to fried, gives our burgers a distinctively different barbecue taste, creating an advantage over our competitors. Up to 60% of our selections offer local flavours made from sauces and spices and we also serve congee for breakfast.”

Along with Burger King’s continuing expansion comes the challenge of finding adequate and competent staff. Ekrem says Burger King’s business structure revolves more around business questions, or topics, rather than organisational charts. Describing the culture as meritocratic, where emphasis is placed on skill, Ekrem says that age is not a consideration.

“Our Chief Marketing Officer is 30 years old and I’m 38, which could be considered quite young for the CEO role, but we don’t believe in hierarchies and structural progression, the old way of doing business. Rather than boxing people into various roles, we organise ourselves into more agile and versatile teams.

“Rather than boxing people into various roles, we organise ourselves into more agile and versatile teams.”

“It’s not really relevant which functional team you belong to, but rather how you’re creating value. For example, to develop a new burger, we have people working from our marketing, supply, finance and operations teams all building the product together.

“Young people get very excited by this collaboration,” Ekrem says. “They are very eager to contribute, to have their voices heard and to be a valuable member of the team.”

Ekrem adds that there is great opportunity for career progression within the organisation. A leadership development program has been launched, comprising five MBA graduates, a plan that ensures Burger King China has access to fresh, bright minds.

“The future is definitely bright with these new colleagues bringing their experience and ideas and we will continue to build our culture around their young minds,” he says. “We know that as long as we have access to the right talent, business problems are solvable. “Our organisation and our culture is very much a result-driven organisation, and you can rise up quite quickly if you have the right mindset and the right attitude to work. I think that’s what makes it much more exciting to work for Burger King rather than a traditional business.”

While Ekrem admits his own background in finance and consulting has definitely helped him with the forward planning of the company, he insists the company’s in-house talent and competency is core to its success.

“Humility is an important aspect of our culture here,” he says. “No matter how successful we become, we always want to make sure that everybody stays humble and hungry for more achievements. For instance, we are cruising well ahead of our budget this year, but rather than taking a relaxed approach, we strive for more at all times.”

With his leadership team predominately Chinese, Ekrem’s endeavouring to learn Mandarin, adding to his Turkish, English and the smattering of Polish he’s learned from his wife. “Yes, I’m making an effort with my Mandarin,” he says with a laugh.

“I have been taking classes since January and hopefully I’ll be conversational at some level next year. Meanwhile, my three-year-old daughter picks up everything, so we don’t even have to make an effort with her. She’s picked up Mandarin herself from her nanny and the other languages from us. She’s like a sponge.”

To attract all demographics, from families to executives, a refreshing modern decor is showcased throughout Burger King restaurants. In fact, Ekrem insists the ambience, with its atmospheric lighting and comfortable chairs, is so inviting that couples dine in frequently.

“The brand perception is very positive here in China with Burger King offering very compelling space at affordable prices,” he notes. “Remember, that most Chinese don’t drive to a Burger King, they walk and dine in, so we had to create a warm and comfortable atmosphere, a bit more upmarket than the competition. So, yes, we have couples going to our restaurants on dates.

“We’ve started table service as well,” Ekrem adds. “You can come into a restaurant, sit down, scan the code on your table, watch a menu pop up, order and be served without leaving your seat. The perfect date!”