When she was 21 years old, Janine Allis found herself in a bar in France, alone, with no job, nowhere to stay, a few thousand dollars of credit card debt, and 400 francs to her name. “It was bizarre, but I wasn’t that stressed,” she recalls. “At 21, you just think – yeah, I’m broke. But it’ll be fine.”

Halfway through a seven year travel frenzy in the 80s, Janine had already worked her way
from country to country – first as a girl scout counsellor in the US, then as a nanny in France, selling time shares in Spain, as a promotions exec in Portugal, then back to France. She’d found that pubs had often been a good place to scout out employment opportunities, and as luck would have it she met a man looking for a new stewardess to work on a yacht. “I talked my way into the job and started working onboard this boat. Six weeks later, David Bowie bought it.”

She would spend 18 days traversing the Atlantic, from Antibes to Antigua, before spending two years in the Mediterranean serving David Bowie drinks as he sunbathed nude on the deck. “People want to know, have I seen his bits? I have,” she laughs. “I had to try to give him the drink without looking down. But actually, for a rock star there wasn’t much sex, drugs or rock and roll. He was a beautiful family man, very inclusive of the staff and lovely to work for.”

During her time rubbing elbows with Bowie’s pals, she met Oscar-winning film producer,
Lord David Puttnam, who promised to put her in touch with Village Roadshow CEO Graham Burke if she ever returned to Australia. He was true to his word, and when Janine finally swapped her sea legs for a stint back Down Under, she quickly got a job managing cinemas in Australia, then later Singapore. Though all her experiences have been enriching, founding Boost Juice saw Janine skyrocket to become a multi-award winning entrepreneur and one of Australia’s wealthiest businesswomen, today worth a cool $66 million. So the $66 million question is, what’s the secret to her success? “To be honest, I’ve never been qualified for anything. I just followed my nose, sought out opportunities and spoke to the right people at the right time.”

It was Janine’s passion for travelling beyond her small hometown of Knoxville in rural Victoria that helped to shape her multi-faceted and daring career path. Each new destination brought a new challenge to solve, a new job she wasn’t qualified for, and a new connection. “When you grow up in an area where there was not a lot of money, there was no one around that has their own business. I went to a technical school that was designed for people to get a trade.

“We didn’t have a Year 12, no one went to university. You went and got a job – I would’ve been expected to be a secretary and have babies by 21,” says Janine. “But Knoxville wasn’t big enough for me. There was this big wide world out there and I wanted to go and see it. I think I was fearless because I was naive. I didn’t have many life experiences growing up, so
I didn’t know what I didn’t know. I didn’t know what I couldn’t do. Sometimes people’s greatest barriers are the ones they create themselves.”

It would be another return to Australia, two more jobs, a wedding and three children before she would come to open the first Boost Juice store. It began while on holiday in the US with her husband Jeff in 1999, when Janine saw how the juice and smoothie market had taken off across the pond. Lamenting the lack of healthy takeaway choices in Australia at the time, she decided to be the one to make it happen.

“I thought it would be a great market and I had zero experience in juice bars or any business, so of course I thought, why not?” she laughs. “We came back, did up a business plan, raised a couple hundred thousand dollars and we got up and going by 2000. The opening of the first Boost Juice bar in King William Street, Adelaide, was while Janine was on maternity leave, 7 months after the birth of her third son, Riley.

“I had zero experience in juice bars or any business, so of course I thought, why not?”

Despite maternity leave seeming like an odd time to start a new business venture, Janine says it was actually the best time for her. “Everyone gets on this hamster wheel, every day they do the same thing and they don’t realise a year’s gone by, and another year.

Meanwhile, I can’t keep still,” she explains. “Maternity leave is a time where, guess what, you have to stop working. You have created life, now it’s time to have a break, and for me it gave me space to start thinking, what do I want?

“I wanted a creative pursuit. I wanted something new. I wanted to create a life and a scenario that suited me, and the only way I could do that was with my own business.” Some 17 years later, that business is a household name, with more than 500 stores across 15 countries. Her new acquisitions, Salsa’s Fresh Mex Grill and Cibo Espresso, have sold over $2 billion of products with more than 550 stores worldwide, all operating under the banner of Janine’s parent business, Retail Zoo. “Sometimes people’s greatest barriers are the ones they create themselves.”

She has gone on to win countless awards and has just wrapped up filming for season 3 of Network Ten’s Shark Tank, where she regularly judges business pitches and invests in new start-ups. “I still don’t know what I want to be when I grow up though,” Janine laughs.

“The challenges came thick and fast each day” Janine reveals. She had to learn everything, and fast. An expert had to come and explain GST to her, and another to explain QuickBooks. One new store had no water or power. Juicers broke. Someone walked out of a shop with $6,000 in their pocket. And by around 2004–2005, sales were going south because the company had grown so quickly.

The cracks in the foundation were beginning to show, requiring a major overhaul of operations. “At the end of the day I look back at all of the times things have gone wrong, and every single thing made us who we are today. For every product you see that works at Boost, there were probably 10 others that have failed dismally. Without those failures we wouldn’t have our successes, so embrace what goes wrong,” says Janine. Janine is a judge on Network Ten's Shark Tank, where she regularly judges business pitches and invests in new start-ups.

Despite her Shark status and accumulated wealth, Janine says she has a hard time agreeing that she is, in fact, successful. “Our business could still be so much better, there’s always something we can improve,” she shares. “I think my biggest negative is I don’t stop to smell the roses enough. I don’t celebrate the small wins and the good stuff because in my mind, that should be the norm, so we’re always looking for new problems to solve rather than saying ‘well done’.”

She also laughs at her unrelenting desire to win at everything she competes in. “I’m very competitive. I have an eight-year-old daughter, and I refuse to let her win at anything.” That doesn’t mean Janine isn’t always trying to improve herself too though, in fact quite the opposite. To her, every day is a new opportunity to improve oneself, go out of your comfort zone, and learn new things.

“You should always have a curious mind. I’m 51 now and I’m still learning something new every day. Last year I even took a yoga instruction course since I practise it every day – it’s officially the only thing I’ve been qualified to do in my entire life,” she laughs. “Hurray. It only took me until I got to 50! And who knows where I’ll go next?”

In fact, now that she has become qualified to teach yoga classes, Janine says accepting an invitation to teach a session as part of an upcoming charity event was a terrifying prospect. “I haven’t done much teaching other than to friends and family. But I’m putting myself out there and it’s more frightening than anything I’ve ever done.”

So with a few booming businesses under her belt, several Shark Tank investments to manage, and a new yoga teaching career unfolding, what else is in store for Janine Allis? “What do I want to be when I grow up?” she considers for a few moments. “Just better.” 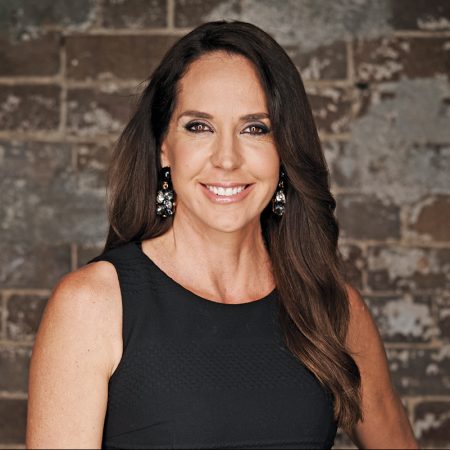