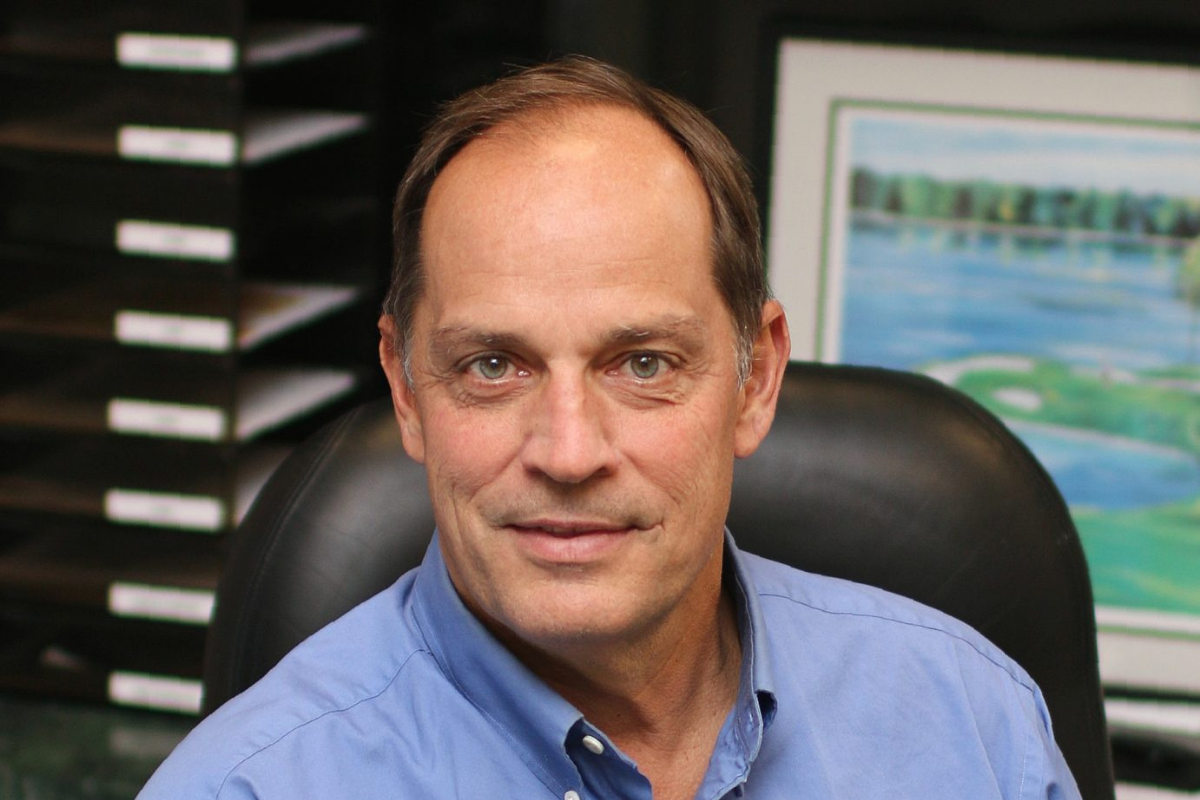 Good ideas often come at the least expected times. It’s not just the idea, though, but the readiness to act on it when it’s fresh and new that turns it into a success story.Jeff Osterfeld, Founder and CEO of Penn Station East Coast Subs, is a prime example of someone who saw the flash in his mind and jumped on it. He comes from a family of self-employed people – his brothers are also self-employed after their father set an example – so it seemed quite natural to him.

“It was in my blood,” he tells The CEO Magazine. “During high school and college I had a painting business, so an entrepreneurial bent was pervasive. It’s pretty much the way my brain works and the way I see the world.

“And like most college students, we’d go to bars at night and afterwards, we’d find a place that had sandwiches. I liked the idea and thought about it.”

Jeff took his innovative ideas on quick-service dining to downtown Cincinnati where he opened his first Penn Station restaurant in 1985. Business growth soon came, but at a cost. “I learned about cheesesteak in Philadelphia, and added that to the menu. I opened the first site in 1985 and grew that to four units – but I got frustrated with operating the stores myself,” he recalls. “I found that when I ran one of the stores, it was clean and the food was made right. But it was totally different when I hired somebody else to do it.

“Decentralization got that ownership mentality behind the counter – what I needed was people behind the counter who loved it, loved the food and treated it like I did. So I ended up franchising. I had no idea what franchising was – like many people in the 1980s, I had heard the word, but really didn’t know what it meant.”

We have a very strong personal culture here at Penn Station when it comes to relationships.

He soon learned the intricacies of franchising and put them to good use from 1988, with Penn Station outlets. “It’s essentially a distribution system,” he says. “I have a product. I have to figure out how I want to get it to the public. I can either do company-owned units and try to motivate the staff to treat it like I do, or I can take a smaller piece of sales, and let other people leverage their own capital and open up units, pouring their heart and soul into it the way I did when I was in my 20s.

“So we went that way, and we’ve been growing ever since. We’ve kept one company unit that we train in here in Cincinnati, and we have 314 outlets today. And we’ve done it through this franchise model.”

Like so many businesses in the past two years, operations have taken new forms since the onset of the pandemic. Penn Station had to rapidly change its modus operandi, adapting to many more takeaway orders instead of eating in. However, what was not compromised was the food.

“Business is really good, but different,” Jeff admits. “We went from 60 per cent carryout to 95 per cent carryout. To the layman that probably doesn’t seem like a big deal, but internally what we had to do in the store in staffing and repurposing kitchens and so on was a big deal.

“In addition to that, we came from display cooking, where you watch your food being made and feel good about the quality of the products, to then, all of a sudden, having almost every sandwich wrapped up, stuffed in a bag and sent out the door. Plus, since it’s hot food, we also had packaging issues.”

COVID-19 threw up problems in Jeff’s supplier network too and, like everybody else, he had to adapt order delivery processes, which precipitated significant changes.

We have a great product, so I’m confident that people will come back in bigger and better numbers.

Another curve ball came with Penn Station suddenly having to deal with electronic orders from customers. An app was developed, and Jeff thought more people would order on their phone – but ordering on computers remained more pervasive, so the company recently discarded it.

“We are having to repurpose our kitchens because, suddenly, we’re making a couple of hundred sandwiches a day and so much of it is carryout,” he shares. “In the past, that was never the case. We simply opened the door. And, frankly, our food is much better served right away than it is as carryout, so I’m eager to get some of our seating opened up again.”

But the perception of Penn Station’s portability in consumers’ minds was such that business boomed. “We’re up double digits since COVID-19 started. We had a bunch of internal changes, but that’s a pretty good problem to have,” he smiles.

Clever people make their own luck. Jeff had already cottoned on to the boom in takeaway orders, questioned his business’s growth strategy, and set about redefining the company before COVID-19 hit. “We got lucky in this regard, and it’s really a coincidence,” he admits.

“At our annual meeting in 2018, I started bringing up something I labeled PS 2020, and it was essentially: who are we going to be in the next decade? I had seen the carryout percentage go from 20 per cent when we started to 60 per cent, and it was a long, steady climb every year. 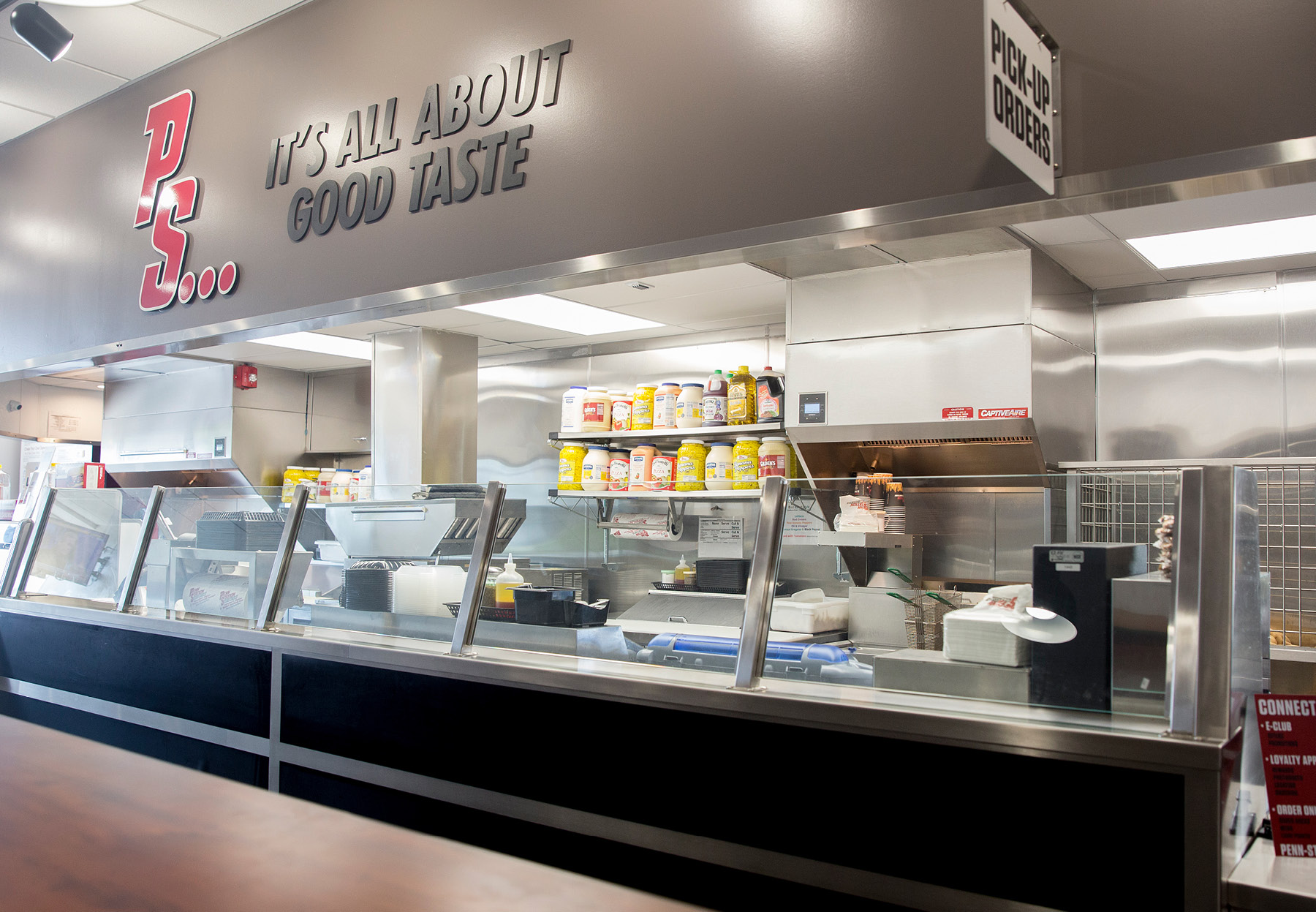 “I knew this was coming and that we needed to repurpose the kitchen. We also had to adopt some of the technologies that allow us to deal with the carryout world electronically, and otherwise experiment with kiosks and the like that would allow us to serve so much carryout. So we implemented a plan in 2019. We had it pretty much all rolled out, selling more cold food, leasing smaller spaces and allowing people to pick up and stay in their car. And then – wham! COVID-19 hit, and the thing I was worried about jumped to 95 per cent.”

In a tough competitive environment like fast food, maintaining long-term supply chains and staff is a demanding task, but Penn Station has a proud record of longstanding relationships in both. That can only happen in comfortable, safe surrounds for those involved. Mutual trust is a prominent factor, Jeff says.

“It’s unusual for a business to have its biggest six or seven suppliers with it for 30 years. It’s a bit of ‘walk a mile in my shoes’,” he points out. “The people we do business with are all trying to make money too. We protect their interests within our franchise system. Our franchisees don’t abuse suppliers, and our suppliers know that. So it’s a partnership, and I believe we’ve put our money where our mouth is in that regard. We have a very strong personal culture here at Penn Station when it comes to relationships.”

Staff relationships are no different. According to Jeff, employees buy into the Penn Station business culture of acceptance and community effort because they can see its authenticity. 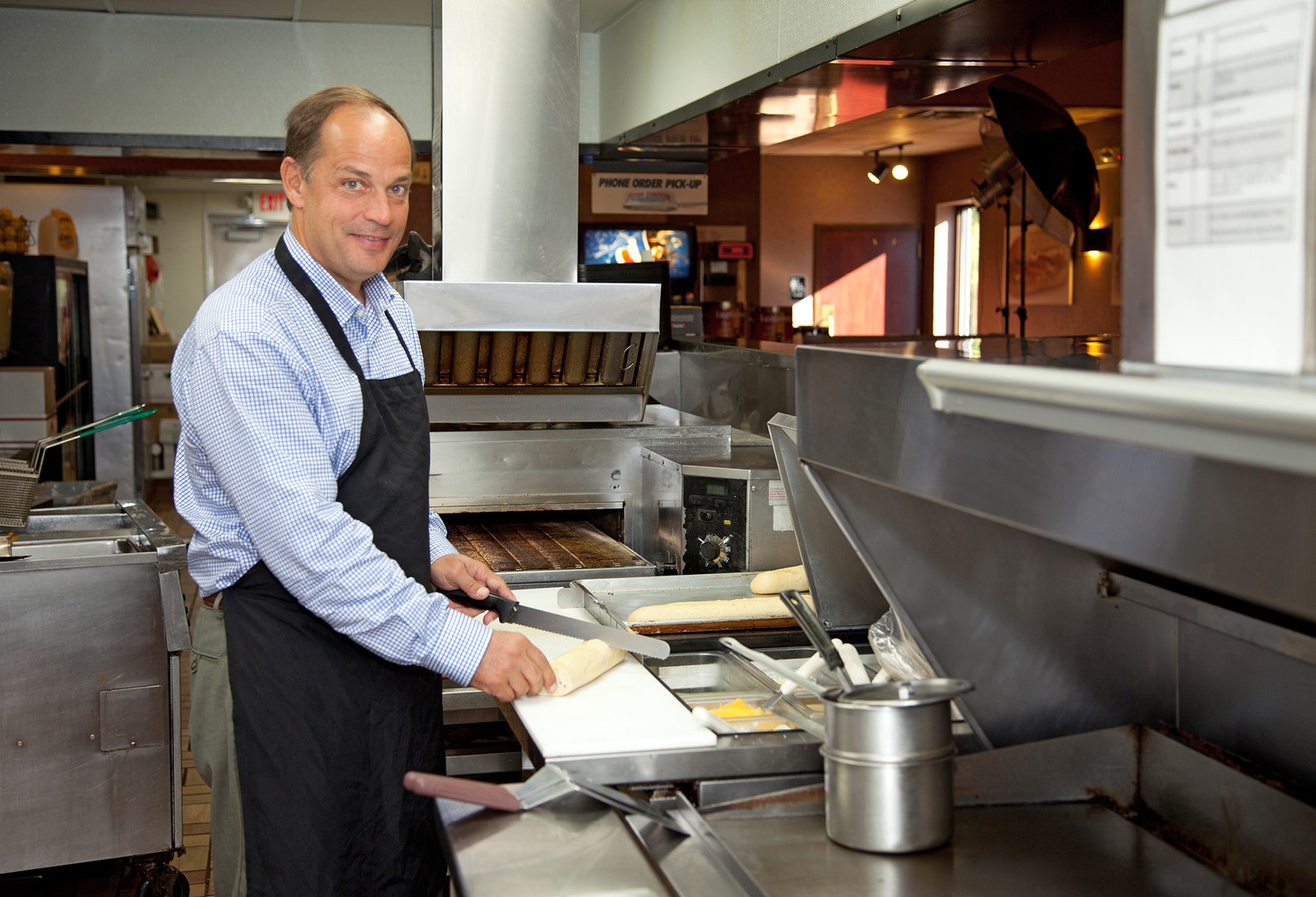 “I’ve had eight or 10 employees who have been with me 20–30 years,” he says. “That’s a culture thing. There’s not a lot of turnover in our restaurants compared with others. And we don’t burn through a lot of franchisees. I’ve had employees – the Vice President of Construction and Director of Administration – for roughly 30 years.”

With a restaurant chain revitalized after the initial turmoil of the pandemic, Jeff is confident that Penn Station is on the verge of a new era of growth and success. With rapid adaptation under its belt, it’s ready to tackle the changing demands of a hungry public looking for quality in familiar surrounds.

“We’re poised for growth. You’ll see our 314 outlets hopefully grow to 600 in short order over the next couple of years. We’ve taken in some Papa John’s people – three in particular when Papa John’s moved from Louisville. We’ve learned a lot from their team. We’re being aggressive right now.

“We have a great product, so I’m confident that people will come back in bigger and better numbers. In the end, ultimately, it’s about that. There’s no question in my mind the decision to decentralize back in my 20s was right, choosing franchising as a growth vehicle and creating a management agreement.”

That’s an order ready to go.

“At Bimbo Bakehouse, we encourage a collaborative relationship with Penn Station East Coast Subs. Providing distinctively delicious, baked goods is our bread and butter – that’s why we’re proud to partner with them to serve desirable sandwiches that keep their patrons coming back.” – Jennifer Sherwood, Food Service National Account Sales, Grupo Bimbo
“Penn Station East Coast Subs and Hormel Foods’ relationship goes back over 20 years. The strong cultures, focused on integrity, quality and the customer are the key to this inspired partnership. We’re better together as we strive to bring an outstanding food experience to the consumer.” – Mark Ourada, Group Vice President Foodservice Division, Hormel Foods Corporation 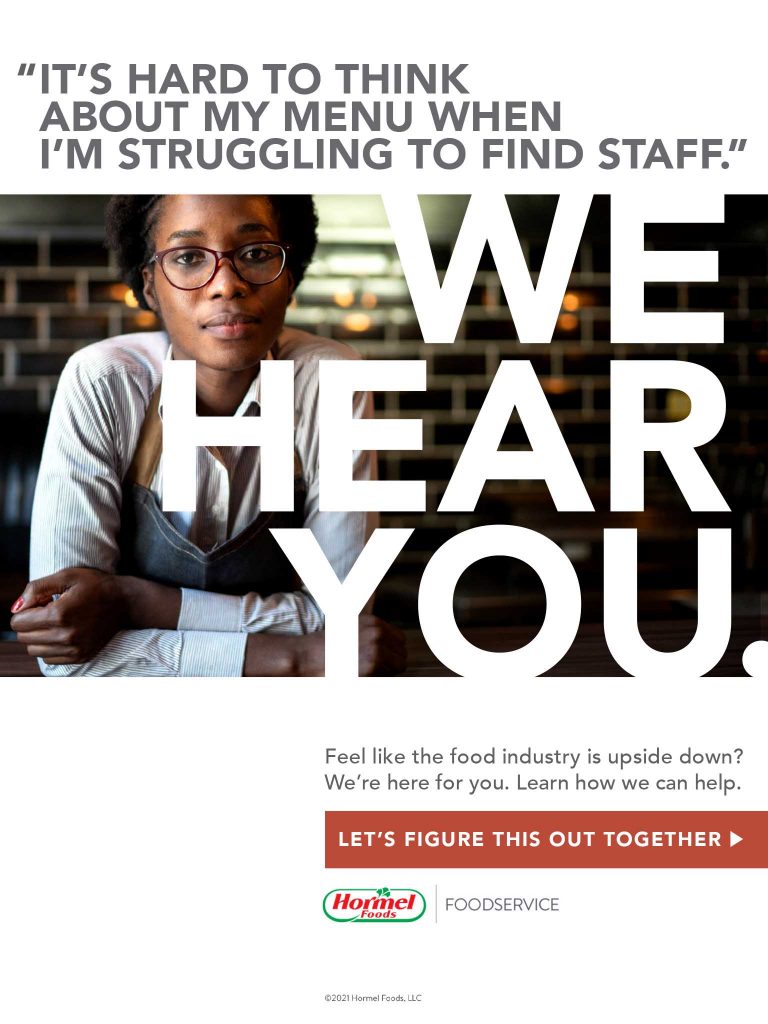