There is a Beam Suntory beverage for every occasion. For Jeffrey Huang, Managing Director of Beam Suntory China, a Jim Beam highball is the perfect pairing for dinner at a restaurant. “It is a fantastic and refreshing drink,” he says. “It’s a complete substitute for premium beer and I love it.”

If he’s at home or having a quiet bite with friends? “I’d probably go with one of our Scotch whiskies like a Bowmore 15. It is phenomenal and super smooth,” Jeffrey notes. And as for a high-energy environment, like a night club? “I might go with our Courvoisier,” Jeffrey says. “In China, they do more shots and Courvoisier cognac, our XO (extra old), is just a great liquid for it.”

“We call it an East meets West culture,” Jeffrey explains. “Effectively, we try to take elements of the best of each to create something no other company can.”

“We call it an East meets West culture. Effectively, we try to take elements of the best of each to create something no other company can.”

In Japan, the team learns about craftsmanship, heritage and tradition. “They won’t let a product go unless they are 100% sure it is of the highest quality,” Jeffrey says. “That’s something that, as you learn more about the Japanese culture, is certainly worthy of admiration and respect.

They do things no other country I’ve seen can do in terms of the relentless focus on quality and continuous improvement.” On the Beam side, Jeffrey highlights the American ingenuity, creativity and innovation – the ‘can do’ culture.

But there is a third pillar included in Beam Suntory China – the Chinese influence. “As we’ve established the company, we made our roots quite clear to the employees within China – both from legacy Beam and legacy Suntory – and we try to make a blend,” Jeffrey says.

“It’s a blended culture but it’s also Chinese. You have to incorporate the local culture; what’s relevant to Chinese consumers and employees. And from there, create a culture that’s a little bit of all of them, but mixing and matching the best pieces.”

Jeffrey notes that China is becoming more internationalised in its drinking choices. “Their first exposure into international spirits was probably through Hong Kong’s links with the UK,” he says. “When the British were still a larger part of Hong Kong, they brought a cognac drinking culture with them.

As Hong Kong is extremely close to Guangdong Province in the south of China, there has been a lot of influence back into mainland China around international spirits – specifically cognac. China is much more heavily weighted to cognac than it is to, say, vodka, gin or even whisky.”

One major difference Jeffrey notes among Chinese consumers, compared with international consumers, is a willingness to pay a premium for brands they think represent quality. “I think that resonates with their own values,” Jeffrey says. “If you look at cognac, for example, China’s probably the largest premium profit pool globally.

The Chinese drink it at a VSOP (very superior old pale) or XO level, which is a more premium price point than the US market. Chinese people are starting to drink more international spirits and they’re exploring more premium variants than the rest of the world as a whole.”

This idea of luxury not only crosses into drinks but into goods as well. “The people who have purchasing power are willing to spend and they want the good stuff,” Jeffrey continues. “They want the best of the best and they’re willing to pay a premium for it.”

To adapt to the latest drinking trends, Beam Suntory released a new Japanese drink called Horoyoi. It is imported from Japan, has a variety of flavours, comes in a ready-to-drink can and contains only 3% alcohol. “The feedback has been very positive,” Jeffrey says.

“We think this is on trend because consumers are now looking at healthier drinking options. They might not always be going for a big night out or trying to drink spirits or 40% alcohol-by-volume drinks. They might want something lighter.”

Jeffrey has a finance background, having started his professional career on Wall Street. He worked at investment banking firms Morgan Stanley and UBS, where he was involved in mergers and acquisitions. In 2004, Jeffrey moved to China and, three years later, joined beverage giant Diageo (think Johnnie Walker, Baileys and Smirnoff). In 2016, he made the switch to Beam Suntory China.

A typical day for Jeffrey begins with a morning workout at the gym followed by 10-minute commute – and he wouldn’t want it any longer than that. “I tend not to like spending a lot of time in a car, bus or train,” Jeffrey says. “I’d rather get things done quickly. Therefore, my commute is, by design, rather quick.” Once in the office he checks emails and sits in on several meetings. Jeffrey often travels nationally and internationally to meet various stakeholders. It is in the spirit of the Japanese concept of gemba. “It means going to the place where the business is actually happening,” he explains.

“Experiencing the business firsthand is the way I would describe it, as opposed to seeing it only in a PowerPoint presentation or over a conference call. It is about me going out, understanding what’s really happening in the market and feeling pulse of it.”

In business, Jeffrey believes in finding and empowering a team and building a culture of trust. “It starts with the people,” Jeffrey says. “This is consistent with Beam Suntory’s values globally about putting people first,” he says.

“If you take care of your team, the team will take care of the business. Make sure you give them the broader strategic direction; let them understand it. But empower them, let them go and make sure you check in from time to time. That’s really a recipe for success.”

In the long-term, Jeffrey wants to see China become the largest market for Beam Suntory globally. Currently, it is showing strong growth and incredible potential, though the market is still significantly smaller than the US and Japan. For Jeffrey, however, it’s not just about the sale.

He tells his team that the product is not really sold until it is consumed. “What I mean by that is for Beam Suntory China, if we sell a bottle of Jim Beam to a distributor, it counts as our revenue. However, the distributor then has to sell it to the bar and the bar then has to get it into the mouths of our consumers.

“I need to make sure my teams are not just focusing on hitting a sales number. Our job within China – and I tell the team this religiously – is going to be consumer first. You have to know when and where the consumption happens. The consumers have to consume the product for it to be a true sale all the way down the line.”

Having been in the beverage industry for 12 years, Jeffrey highlights the key to making a great whisky. At the top of the list are natural ingredients, high-quality barrels and a good water supply. Not to mention a keen nose, patience and an understanding of a full range of flavours.

But there is another crucial requirement. “There has to be passion,” he says. “It requires a tremendous investment of time and energy. It’s a lifelong educational journey.” 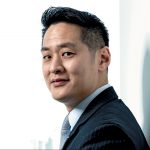