“Coke is much more than a refreshment”: Paris Nikolopoulos 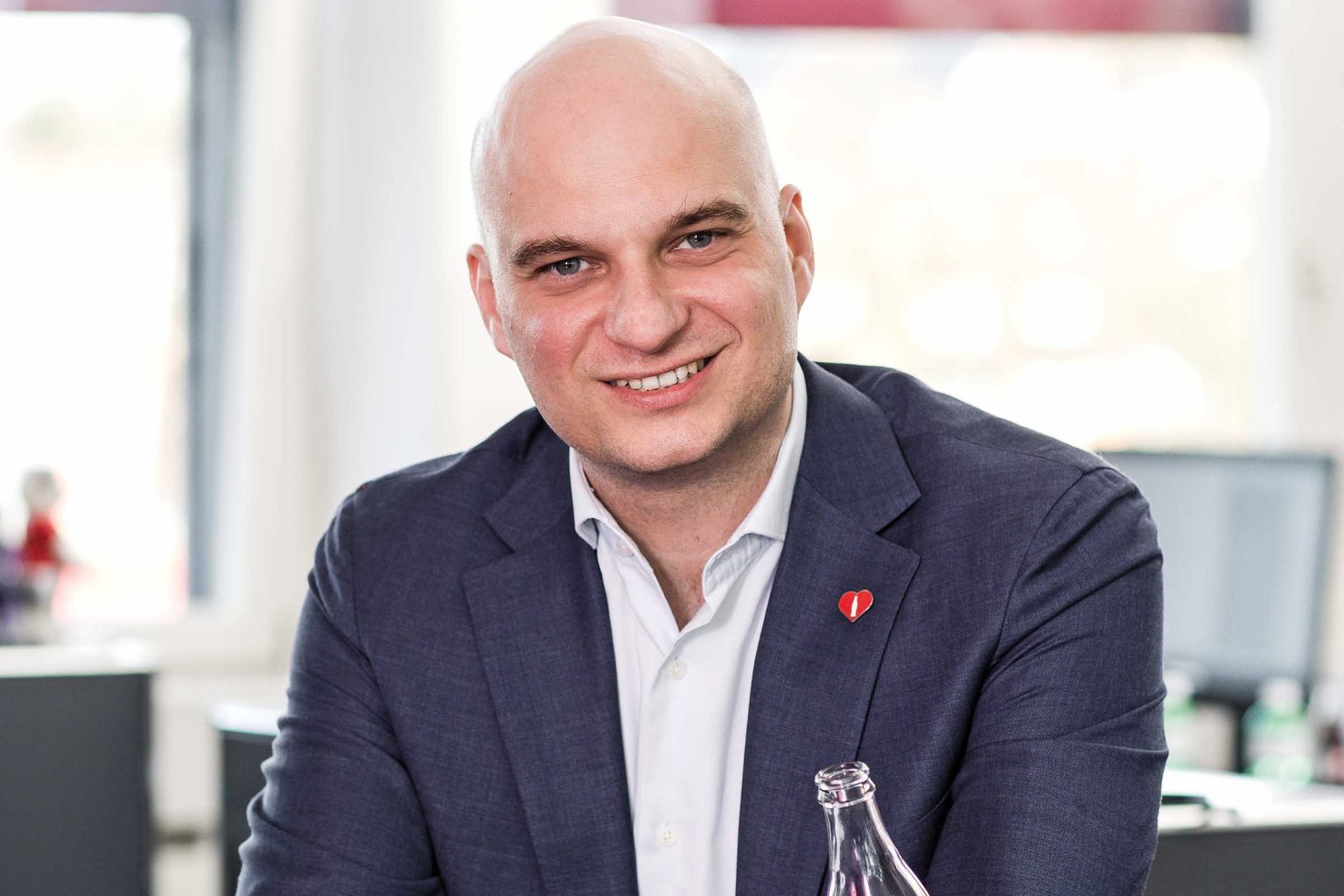 When Paris Nikolopoulos was working for Coca-Cola in the German-speaking part of Switzerland, he came across a word that would have a major influence on his career. Today, he heads up the soft drink giant’s operations in Romania, and the word, weiterbildung, which means ‘continuous development and continuous learning’, guides his thinking. 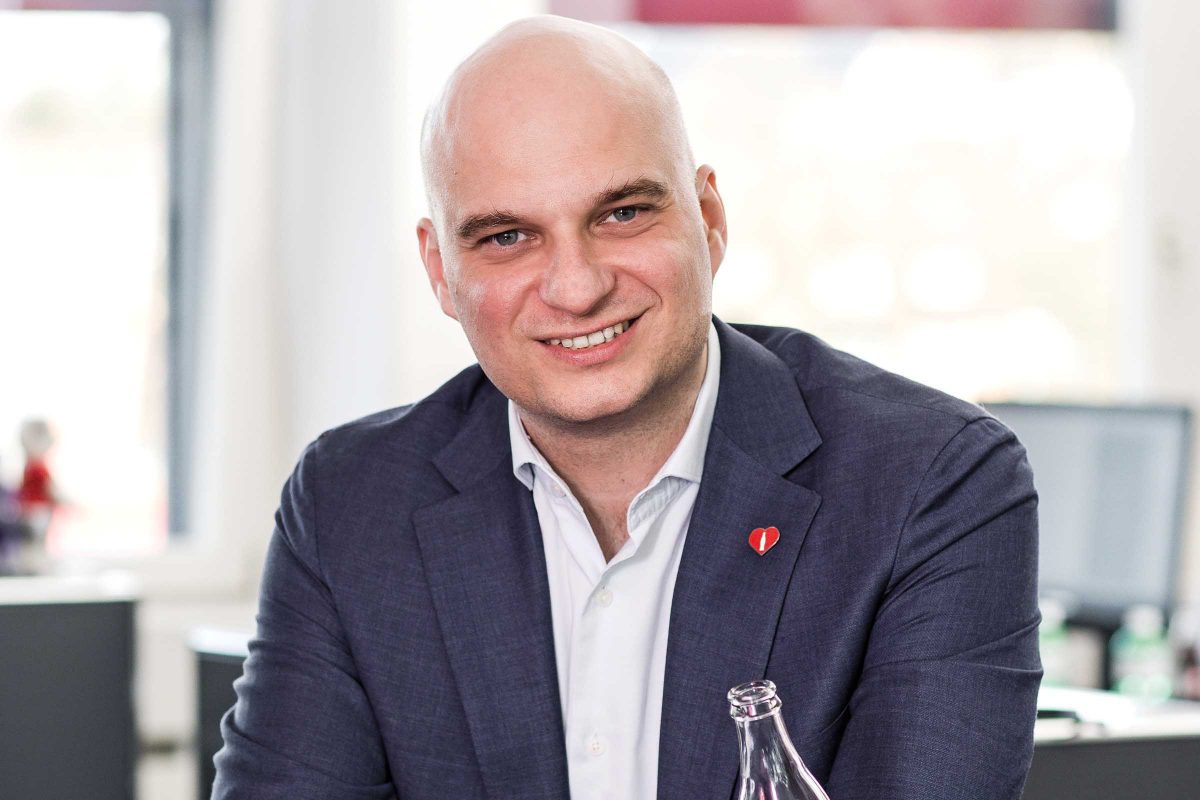 “It made me realise you should never stop taking in new information, finding out more about what is important,” he tells The CEO Magazine. “It’s a part of my character that has really helped me in every job I’ve done. Wherever you are, there is always more to learn.”

Paris was born and raised in Greece, but he has spent all his career in other countries. So familiarising himself with new cultures, languages and ways of working has been vital to his success. This was particularly true when, after 15 years working his way up through Coca-Cola Switzerland, he moved to Bucharest in 2019.

“When I landed in Romania, I decided I wasn’t going to turn up on my first day and tell everyone what needs to be changed. Instead, I asked questions like, ‘What needs to evolve for us over the next 10 years?’ and, ‘What do we need to learn?’

“Something I expect from myself and everyone I work with is curiosity. We all need to try new things to see what happens, because we only learn and move forward when it’s not what we were expecting. Whether it’s a success or a failure isn’t the only thing. What’s important is that, at every stage, we are learning. That’s weiterbildung.”

I wasn’t going to turn up on my first day and tell everyone what needs to be changed. Instead, I asked questions.

Of the Atlanta, US-based corporation’s 200 international markets, Romania has become one of the most important, employing more than 1,500 people and delivering more than €240 million across the value chain to the state budget. In fact, every member of staff effectively sustains 17 other jobs outside of the company, boosting treasury revenues still further.

Its products, including Fanta, Schweppes and Costa Coffee, are sold in more than 90,000 outlets, including supermarkets, independent stores, hotels, restaurants and cafes.

Coca-Cola’s vision is to become a total beverage company, with Romania being among the countries that have a diversified portfolio and good performance in various sparkling soft drinks categories (including low and no calories), but also still beverages, juices and water.

In 2019, more than 1.2 billion litres of beverages produced by the Coca-Cola System reached the homes of millions of Romanians, keeping CocaCola products in the top of consumer preferences. But Paris knows that they have to remain true to one of the most famous brands in the world. “Everything needs to be embedded in a vision,” he says.

“And that’s what we have coming very loud and clear from headquarters. Our purpose is to refresh the world and make a difference. That informs all aspects of our strategy. It’s about getting connected with our consumers and being part of their lives because Coke is much more than a refreshment. “When I ask people when they had their first Coke, it’s always associated with something – a special moment in their childhood. I think that’s a key thing.” But that doesn’t mean resting on laurels. Paris has instigated an ambitious strategy centred around five pillars to drive operational excellence and equip it for the challenges ahead.

“The first is prioritisation and optimised portfolio. Coca-Cola Company already announced that it will cut its range of 400 global brands in half,” he explains.

“It means making some tough decisions on brands that may be loved by a small number of people but that can’t serve our business purpose. Resources must be directed to where they can achieve the most revenue and growth.”

The second is purposeful and disciplined innovation, not throwing everything against the wall to see what sticks. His vision is to embed experimentation into the ethos, particularly in the digital space, and minimise the time taken to action learnings from the consumer feedback loop.

“The third we already do quite well – increasing our market reach through boosting consumer demand,” Paris says. “That is a strength for us, and it leads to the fourth, which is accelerating our business by enhancing marketing, particularly online, so we have the capability to drive the demand.”

The fifth and final pillar is an internal one – evolving the many partnerships with suppliers to evaluate efficiencies and look at areas with room for improvement. “Something that many Romanians don’t realise is that we work within a system, together with our bottling partners,” Paris shares.

“Many assume we import all our drinks from the US. It was the same when I worked for the company in Switzerland. I used to say, ‘But we have two plants in Switzerland. It’s made by local people. In Romania, we have three plants. It’s been produced here for 30 years.’ That pleasantly surprises a lot of people.”

The local bottling partner, Coca-Cola HBC Romania, also helps with the company’s push towards greater sustainability. Inroads have already been made through initiatives like the 100% recycled packaging used for its mineral water brand, Dorna, and replacing the plastic that wraps multi-packs of cans or bottles with cartons. The aim is to recycle all packaging by 2030.

“You know, some are exposed to negativity around the brand, but our talented teams are making a positive impact. I like to say that Coca-Cola Romania certainly has a secret formula, but it’s not the one they keep under lock and key in Atlanta. It’s the people. They’re so connected to their work, so passionate. They’re the real thing; they’re what makes us great.” 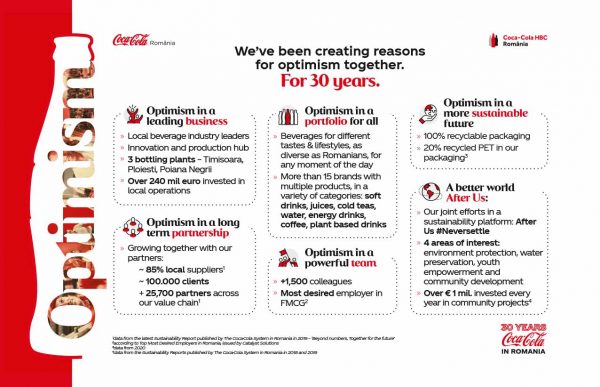 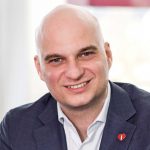