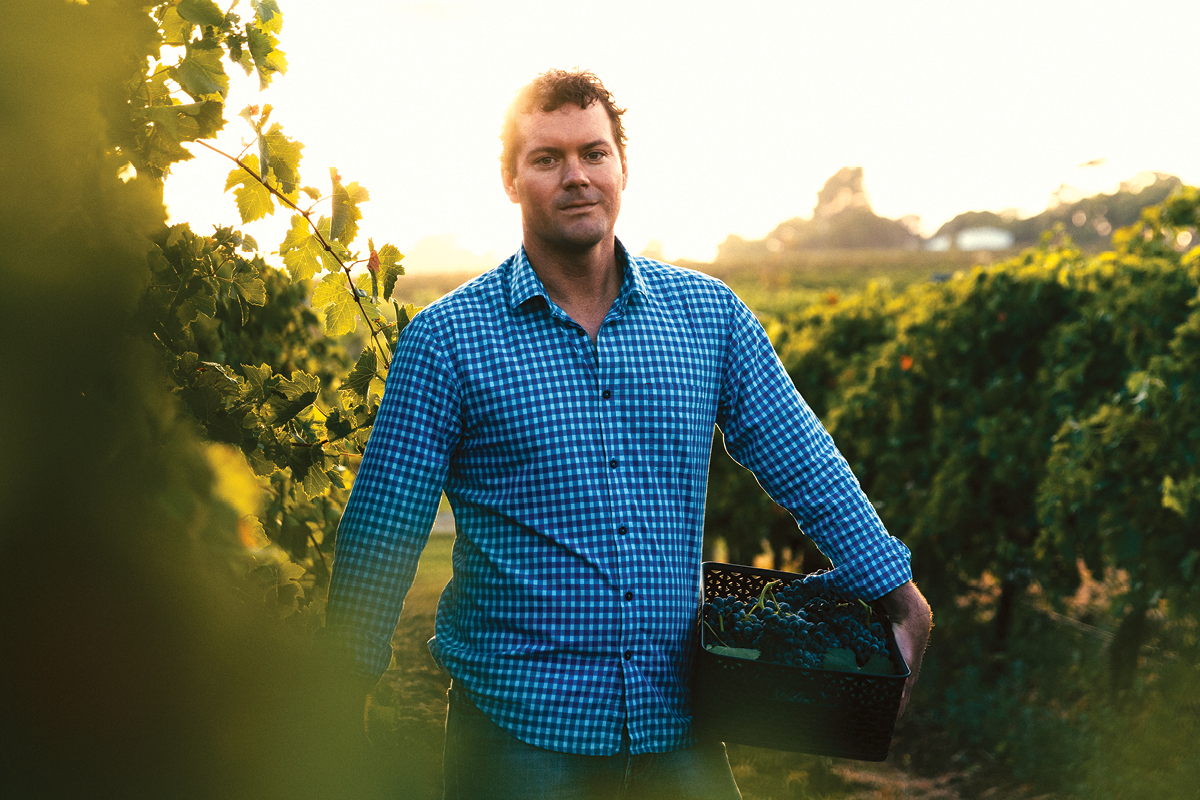 Asked to choose his favourite product from his family’s beverage portfolio, Richard Angove takes a long pause. “That’s tough,” he admits. “I’d have to go with the 20-year-old St Agnes XO Imperial. It’s a lovely, delicate spirit. You can taste the passion that has gone into making it, each sip is like a little piece of history. There’s no-one else in Australia that can make a drink exactly like this.” He may only be 39 years old, but Richard is a fifth-generation Angoveone of Australia’s great winemaking families, and oversees its national sales, marketing and distribution business, Vintage House Wine and Spirits.

At the forefront of the company’s extensive portfolio of nearly 50 premium Australian, New Zealand and international brands is Angove Family Winemakers, founded in 1886 by Dr William Thomas Angove. As one of Australia’s oldest family-owned and operated wineries, it has grown to become the country’s 16th largest winery and 12th largest wine exporter by branded wine sales.

It was also the first winery in the Riverland region of South Australia, and has since forged a well-trodden path in crafting iconic single-vineyard McLaren Vale wines, as well as a selection of premium wines from some of South Australia’s other top wine-growing regions.

With a staff of 170, Angove Family Winemakers is overseen by Chairman John Angove, with Richard and his older sister Victoria as Joint Managing Directors.
“Luckily, we have different skill sets and personalities that complement one another, so we’ve split the business into two main areas. Victoria is good with details and so she looks after operations, finance and human resources. I look after the viticulture, winemaking, sales and marketing. We play to each other’s strengths and get on really well,” says Richard.

Wine in the blood

After completing a business degree and a postgraduate degree in winemaking and viticulture at the University of Adelaide, Richard left for America with no immediate plans to return. But it wasn’t long – only six months in fact – until he was back home.

In 2007, Richard was the top student at the Australian Wine Research Institute’s Advanced Wine assessment course. Since then, he has judged at the Adelaide Wine Show, Victorian Wine Show and Great Australian Shiraz Challenge.

“The fantastic thing about making wine is that there are two seasons each year one in the northern hemisphere and one in the southern hemisphere,” he explains. “For eight years, I alternated between the NSW Hunter Valley, Tasmania and Central Victoria during Australia’s grape-growing season, and then I would spend the other half of the year in vineyards throughout the US, Canada, France and Spain.

“This gave me the opportunity to learn from different people, experience dozens of grape varieties and, ultimately, see how other cultures make their wine.”
Richard always knew he wasn’t destined for a typical nine-to-five office job. “Before I did my winemaking degree I was keen on being a skiing instructor – until I realised that I needed to get a haircut and a real job,” he laughs. “I’ve always enjoyed manual work and making a product that people can enjoy, so winemaking was a good fit.”

In 2008, Victoria went on maternity leave and left a position open in the sales and marketing department at Vintage House Wine and Spirits, and to oversee the family’s McLaren Vale interests.

“Transitioning from winemaking to marketing was a big change, but I was ready to come back to the family business. It didn’t take me long to realise that making wine was reasonably easy – it was the selling, marketing and getting it into the consumers’ hands that was challenging,” he reveals.

Over 132 years, the Angove family has built a strong team of trusted employees spread across production, sales and marketing. “Even though my father has retired, he’s still a hands-on chairman. He’s worked in the business for 45 years so we’re fortunate to have him just a phone call away when we need advice or help solving an issue because, more often than not, the issue is likely to have happened before,” Richard explains.

“We also have a strong team of senior managers who we trust to look after each part of the business. We learn a lot from them because, at the end of the day, you’re always learning. That’s one of the great things about owning a family business: you attract dependable long-term employees who understand the family approach to business, which can sometimes differ to that of a big corporation. In terms of culture, we’re a flat organisation – there’s no hierarchy here.” 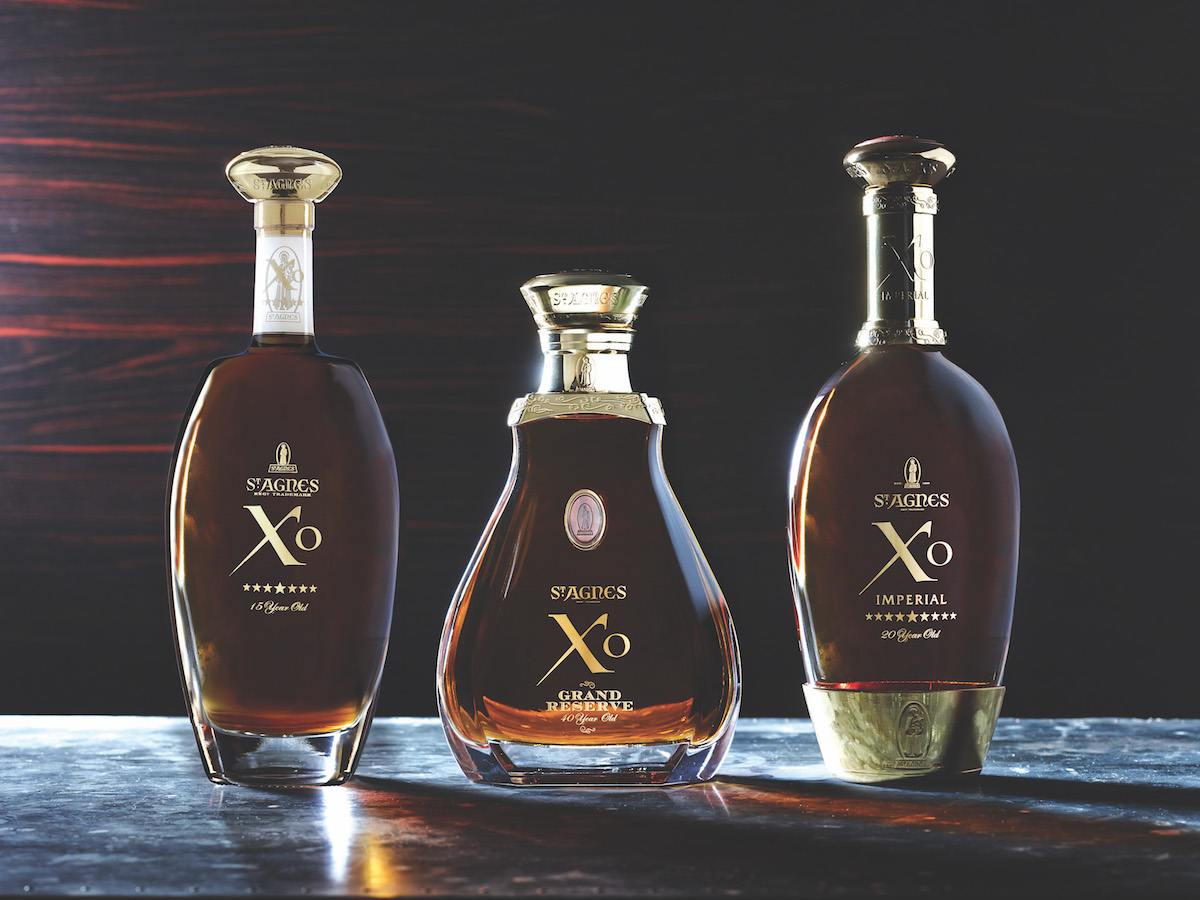 Brandy for the new age

Since Richard entered the family business a decade ago, he has been focused on the ‘premiumisation’ of the family’s wines, brands, sales strategies and vineyards. “These areas have all evolved into something that everyone in the business is proud of. It’s amazing to see where we’ve come from to where we are now,” he remarks. “For example, over the past six years, we’ve put a lot of hard work into evolving our St Agnes distillery XO brandies into one of Australia’s iconic spirit brands, which meant a thorough repackaging and repositioning in the market.”

Richard explains that unlike gin, which can be made one day and sold the next, crafting brandy takes time and patience. “We are lucky to have the resources to do it because it’s not a short process. We’re talking about 20- to 40-year-old brandies that were distilled in the 1970s and 1980s, even before I was born. It’s crazy to think that the brandies we’re barrelling today might not be on the market until 2048. I may not even be here,” he laughs.

This year, the St Agnes Grand Reserve 40-year-old XO, which retails at A$750 per bottle, won Best Australian Brandy at the Australian Distilled Spirits Awards – for the third year in a row – and at the Tasting Australia Spirit Awards. This particular brandy was distilled in 1970 by Richard’slate grandfather and one of Australia’s iconic winemakers, Tom Angove. Still being recognised for his contribution to the industry, Tom was also the inventor of the wine cask, which revolutionised wine sales around the world.

Sharing this penchant for brandy is Richard’s father John, whose 20-year-old St Agnes XO Imperial has taken out Best Brandy at the Hong Kong International Wine and Spirits Show three years running. Not only does this prove that Australian craft spirits can compete and win on the world stage, but it also gives huge momentum to the brandy revival. “This international recognition has given us even more energy around a product that hasn’t necessarily been fashionable in the past. Brandy is making a comeback and we’re so excited.” 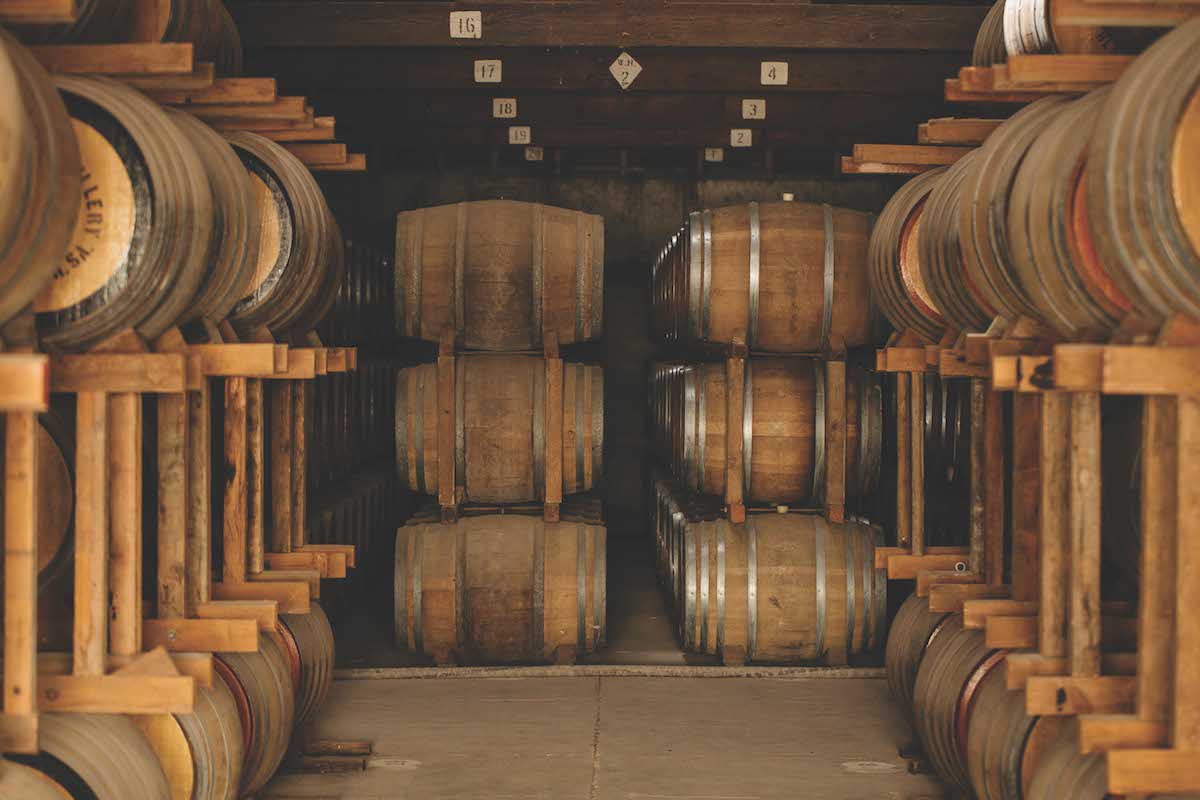 As in all things, the path to success is a bumpy road. “We’re making an agricultural product and, every year, we face Mother Nature – not to mention the ups and downs of supply and demand and the stress of grape pricing, which all affects our ability to make wines that are easy to sell,” says Richard.

Operating in a country with a population of just 24 million, the Australian wine industry must export to other countries with larger populations and higher demands to be successful. While this brings obvious benefits, it also leaves winemakers vulnerable to fluctuating exchange rates and shifting economic conditions.

“As expected, we experienced a decrease in exports during the global financial crisis and when the US dollar hit parity for a number of years. Managing supply and demand and finding the right international markets are challenges we will always face. Nevertheless, we’re lucky to have strong international partners and skilled export sales managers who can identify risks and match the right products with the right markets.”

When it comes to international appeal, Angove Family Winemakers stands out as a fifth-generation owned business and one of the oldest wine companies in Australia. “McLaren Vale is the best place to grow grapes in Australia in terms of weather consistency. If you can trust the weather as much as you realistically can then, year-in and year-out, you can make wines that have a consistent flavour, richness and fullness. This means that consumers can trust the brand because they know they’re buying from a dependable source at good value for money,” says Richard.

“The Australian industry as a whole is coming out of a challenging time of oversupply and a competitive international market, so there’s real opportunity ahead for expansion in the short- and medium-term.”

Origins
In 1886, Dr William Thomas Angove, Richard’s great-great-grandfather, emigrated from the UK to Australia and established a medical practice in the Adelaide’s Tea Tree Gully, where he started making wine and brandy as a tonic for his patients.

The Angove family is committed to private ownership, confident that this will allow them to maintain strong family values, remain true to their organic and sustainability targets, and continue their contribution to the Australian rural community.

“Both Victoria and I feel that we’re merely custodians of the business,” explains Richard. “We each have two young children and our younger sister Sophie is becoming more involved in the business, so we want to set it up for the next generation.”

Sustainable and organic practices are of particular importance to Richard, and will play a leading role in the company’s future growth. “We are Australia’s largest grower of organic grapes ensuring that 100% of our company is managed organically with no artificial herbicides, pesticides or fertilisers. With healthy soil, you can grow grapes with the best flavour,” he explains.

The Angoves have also changed their production methods across multiple areas, upping their reliance on renewable power sources. “Two years ago, we installed 200 kilowatts of solar panels that now provide us with about 15% of our total energy needs. At Cellar Door, we have a 30-kilowatt system and because we operate during the day while it’s so sunny; more often than not, we end up delivering power back to the grid. We’ve drastically reduced our power bills and there’s a lot of potential for further sustainable growth.

“Despite being established in 1866, we’re younger than we’ve ever been in terms of the wines we’re making, our packaging and production processes, and the energy of our team,” says Richard. This is also reflected in the style of wines made in the McLaren Vale region, as well as the youthfulness of the family’s partner growers. “While the environment is still highly competitive, we’re keen to grasp the opportunities that are out there. We never rest on our laurels and each year we set out to make better wine than we did the year before.” 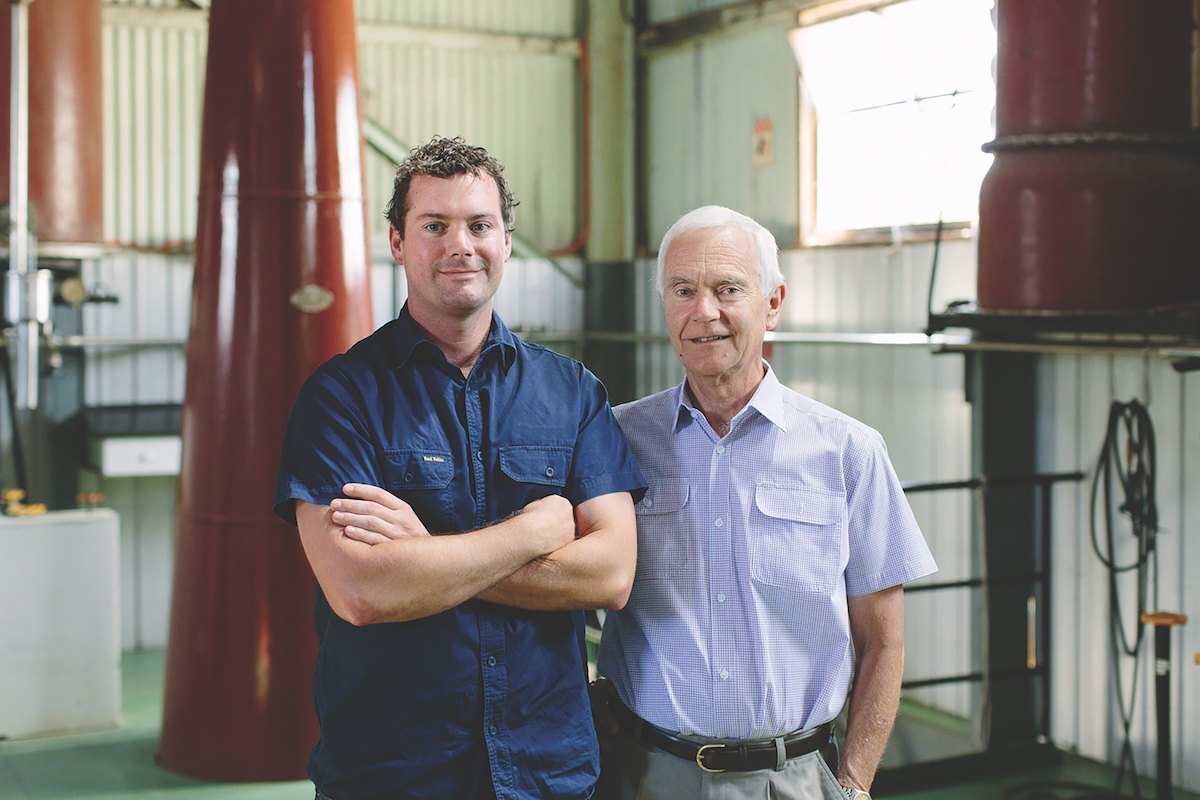 More than 130 years of successes, failures and lessons learned – not to mention insights and advice from his grandfather and father before him – have helped shape Richard’s leadership philosophy. From this, three pieces of advice have stuck with him to this day. “My grandfather taught me to not be afraid of making mistakes, but to learn from them. He taught me to always challenge the norm and to not be afraid of doing something different – if you never have a crack at it, you’ll never know,” says Richard.

The second piece of advice comes from one of the family’s business partners who used to grow not grapes, but tomatoes. “He taught me that the greatest fertiliser for the plantation is the owner walking through the crop, talking and listening to people, and having that hands-on approach at the ground level of the business.
“And last but not least, is that if you trust and respect your people, then the business will look after itself. Leadership means trusting, appreciating and empowering every single person in the business. You need to give people the flexibility to make the job their own and let them shine, not micromanage them.

“While that might sound like something straight out of a management textbook,” Richard laughs, “it’s something I honestly believe in and act on every day.” 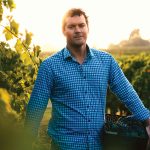