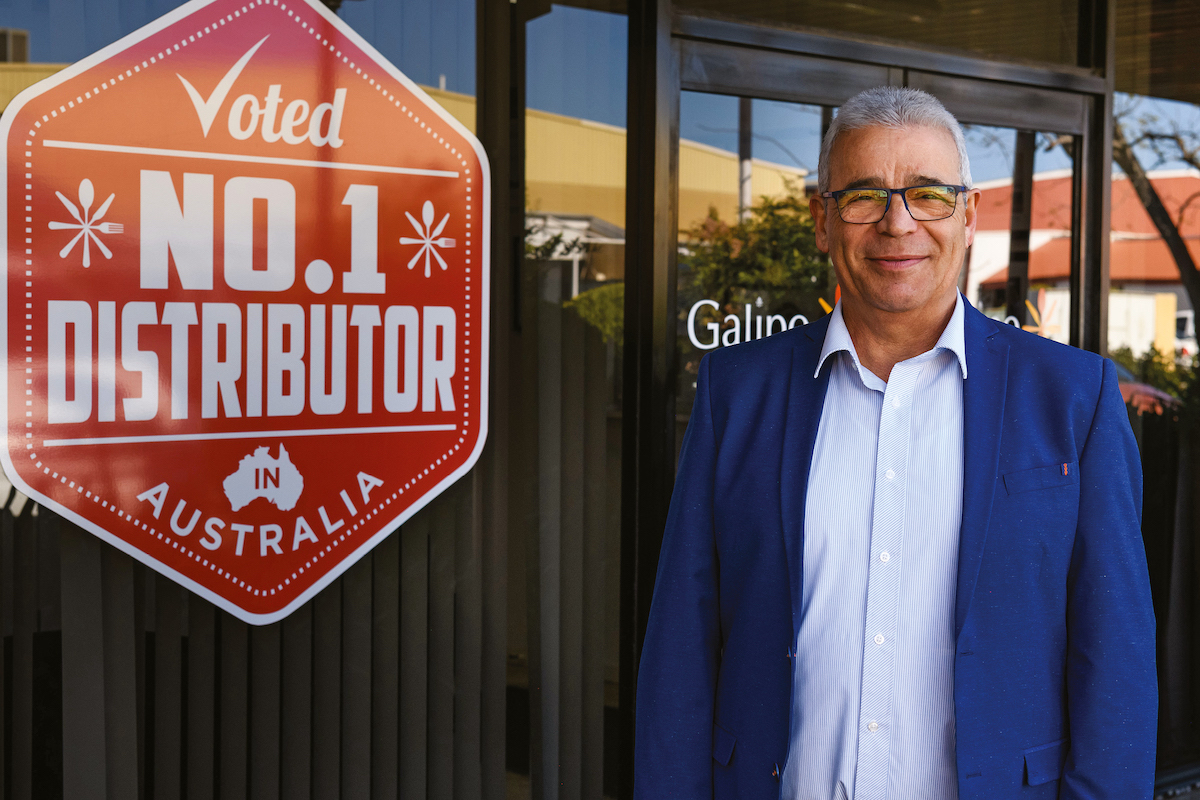 During his second year of thumbing through voluminous legal texts, Sebastian Galipo came to the tough realisation that law was not for him. Instead, he wanted to run his own business. Although he wasn’t quite sure yet which path he wanted to follow, he quit university and, over the course of the next few years, tried his hand at everything from rubbish collecting to managing hotels and snack bars.

None was quite the right fit, so he decided to go back to what he knew best – sales. This was how Galipo Foods began and how Sebastian finally found his calling. When he started the food service distributor back in 1983, it was a modest set-up selling meat for a yiros company.

He had four chest freezers in his home garage and a one-tonne truck for deliveries that doubled as a second family vehicle. But, even then, he saw immense opportunities for the then one-man band. “At the time, most distributors would sell a very niche category of products, such as juice or milk or meat, and their customers would buy from a wide range of suppliers,” he explains. “I grew my business by building great relationships with my customers and then looking to see what else I could sell to them.”

His brother, Bill, came on board as partner in 1988 and, over time, Galipo’s range grew to include thousands of products, offering customers a “one-stop-shop model”. “This became much more convenient for my customers and saved them the need to buy from so many different suppliers,” Sebastian points out. 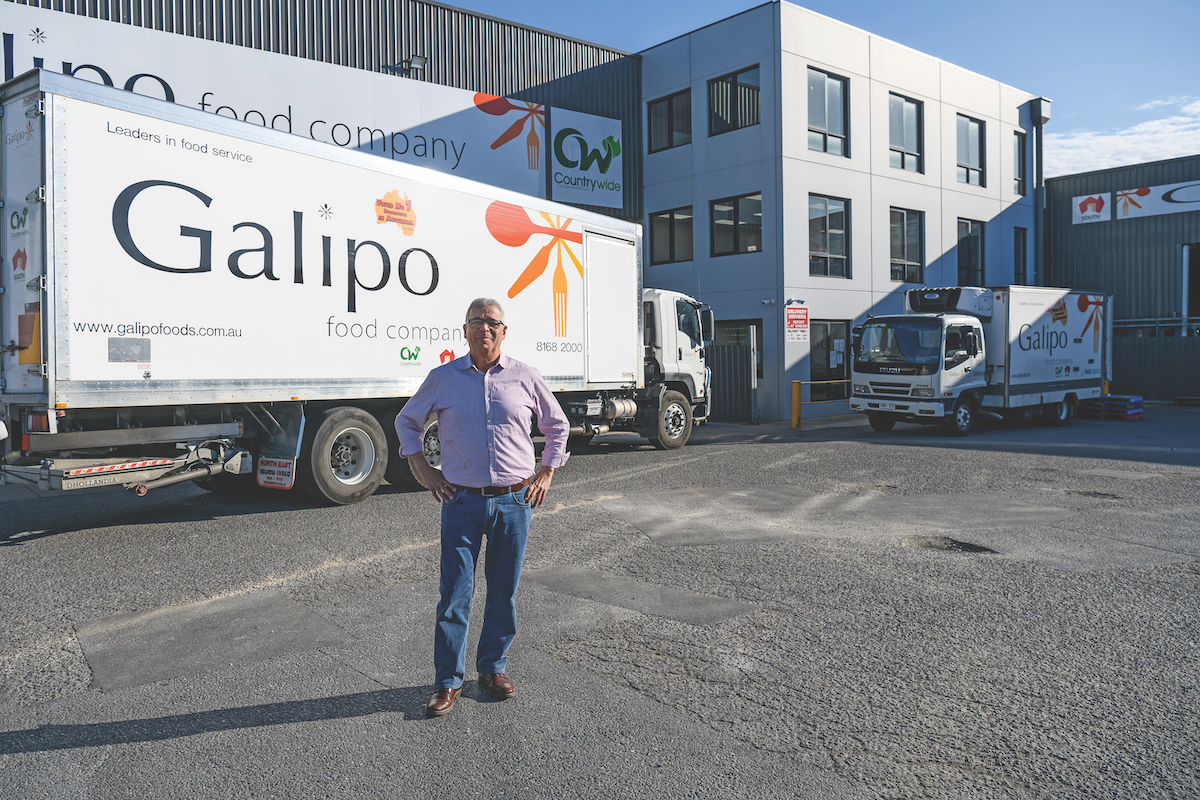 Although he admits that finding the right staff members has sometimes been a challenge, Sebastian says one of the greatest highlights of his career has been developing his team.
“All of our management roles are filled by people who’ve started in other less-skilled roles often in completely different departments of the company, and have grown into a leadership role,” he notes. “We haven’t deliberately avoided hiring staff from outside the company to fulfil a management role; however, we’ve always had a staff member who had shown a passion for the company and skills that suited the role. This has given us a management team that understands the inner workings of the company.”
Here are just a few of the talented staff members who’ve come up through the ranks:
• John Tsouvalas commenced as a driver in 1997 after owning a takeaway shop and he has progressed to become Galipo’s Director of Sales.
• David Spangler started working in the warehouse straight out of school in 1991 and he has become the company’s Purchasing Manager.
• Nancy Perugini joined in 1988 and has, to date, held several roles within the company including the position of Sebastian’s personal assistant and stints in the telesales, offsite ordering and, most recently, the accounts department.
• Darren Grosser began loading trucks part-time in 2003 while getting his university degree and then worked in the warehouse before becoming Sebastian’s personal assistant and then the company’s Business and Marketing Manager.
• Nathan Narayanan joined Galipo in 2008, picking orders in the warehouse while studying his commerce degree, and then moving through a number of roles to become General Manager in 2013.

Ever on the lookout for an opportunity, Sebastian would closely watch to see which products were selling well in retail supermarkets and then approach the manufacturer to see if they could produce a similar product that was suitable for food service. “For example, Mountain Fresh juice used to be sold in large containers and I worked with them to develop single-serve glass bottles, which are still very popular in cafes and snack bars,” he says.

To this day, the company continues to seek out unique products in the market that’ll allow it to help its customers add something new and different to their menus. “We’re always open to new manufacturers to create new markets,” Sebastian says. Its niche focus has also helped Galipo Foods build a strong presence with operators such as fish and chip shops, school canteens and small goods providers.

“This has allowed us to get a lot of traction in these niche categories and then expand our range further to suit other categories like cafes and hotels,” he reflects. He’s proud that Galipo was one of the first food service distributors in Australia to have a full tasting kitchen on its premises, something which he believes has been pivotal in providing first-class training to its salespeople by allowing its suppliers to demonstrate and taste the product with them.

“They can then better convey the benefits of our products to our customers,” he says. Meanwhile, to better enable its customers to sample its products and access great deals direct from its suppliers, Galipo set up the annual SA Foodservice Expo held at the Adelaide Entertainment Centre. “This has also been a key strategy to introduce us to potential new customers as we open the expo up to any food service businesses within the state,” Sebastian says.

Investing in technology is a continual focus for Galipo Foods. “I’ve been on multiple study tours overseas and within Australia and I’ve also sent our senior managers on study tours overseas to pick up ideas from other markets and be world leaders in innovation,” Sebastian shares. One such study tour to the US introduced him to the benefits of voice picking technology. 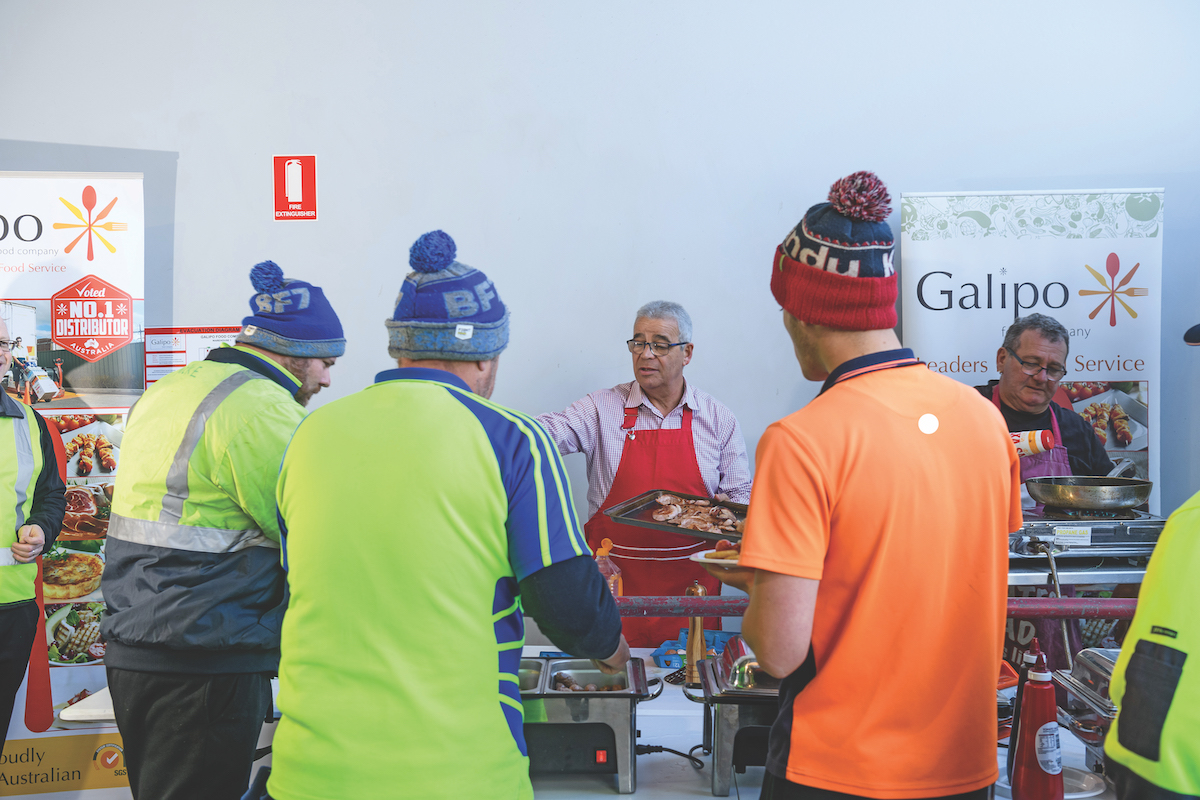 “We then became one of the first businesses in Australia to implement a voicedirected warehouse management system,” he reveals. “This substantially improved our picking accuracy, which is a big benefit to our customers and also the efficiency within our business.”

In 2019, the company also became the world’s first food service distributor to launch an autonomous mobile robot (AMR) warehouse management system in a cool room environment. It followed this up with a dry store AMR in 2020 – the second biggest AMR project in Australia. “This has further helped our picking accuracy, speed and space utilisation,” Sebastian says.

As the growth of Galipo Foods started to accelerate, other companies in the space started to get jealous. “One of our competitors started a rumour that we were going broke, causing many suppliers to shorten the terms on us, which nearly caused us to collapse,” Sebastian recounts. Thankfully, after several meetings, the major suppliers realised their concerns were unfounded and reverted to normal terms. 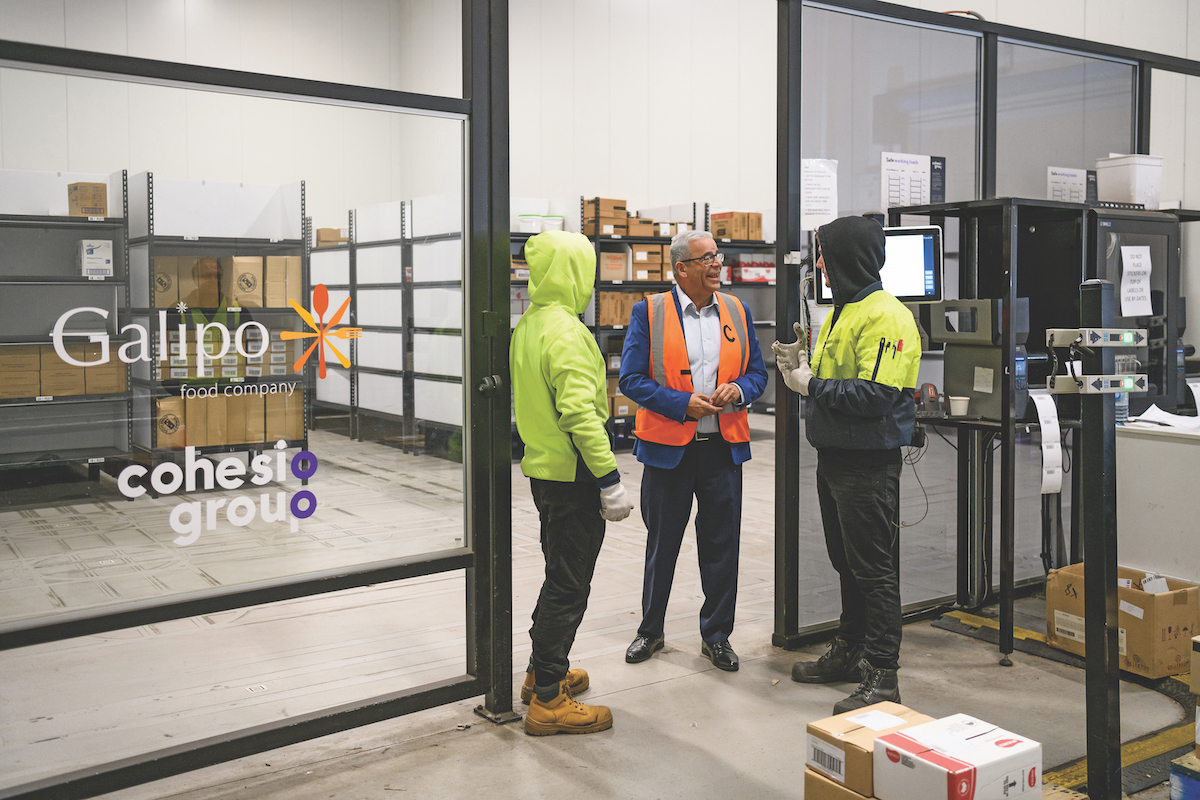 “That was an extremely difficult time in the company’s history and an experience I learnt a lot from.” Ridding the company of inefficiencies has also been a continual process, which has gathered importance as the firm has grown. Sebastian looks back on the years between 2005 and 2007 as particularly strenuous in this regard, with the company finding itself in an unwelcome financial predicament.

“We went through a difficult time financially due to high levels of inefficiencies together with the infiltration of some staff who had a poor attitude,” he recalls. “A bad culture had crept into many areas of the business as we needed to hire staff quickly during our rapid growth.” In addition to staff pilfering and a lack of training, customers had worked out a way to cheat the system to gain free stock.

“It was a terrible time for me, both emotionally and financially,” he shares. The stress contributed to major heart problems and, in April 2007, Sebastian had to undergo four heart bypass surgeries.

Fortunately, there was a silver lining. Not only did Sebastian make a full recovery, but he learnt some valuable business lessons, too. “I realised I couldn’t oversee every aspect of the company and made the strategic decision to become more professional with a full management team,” he says. 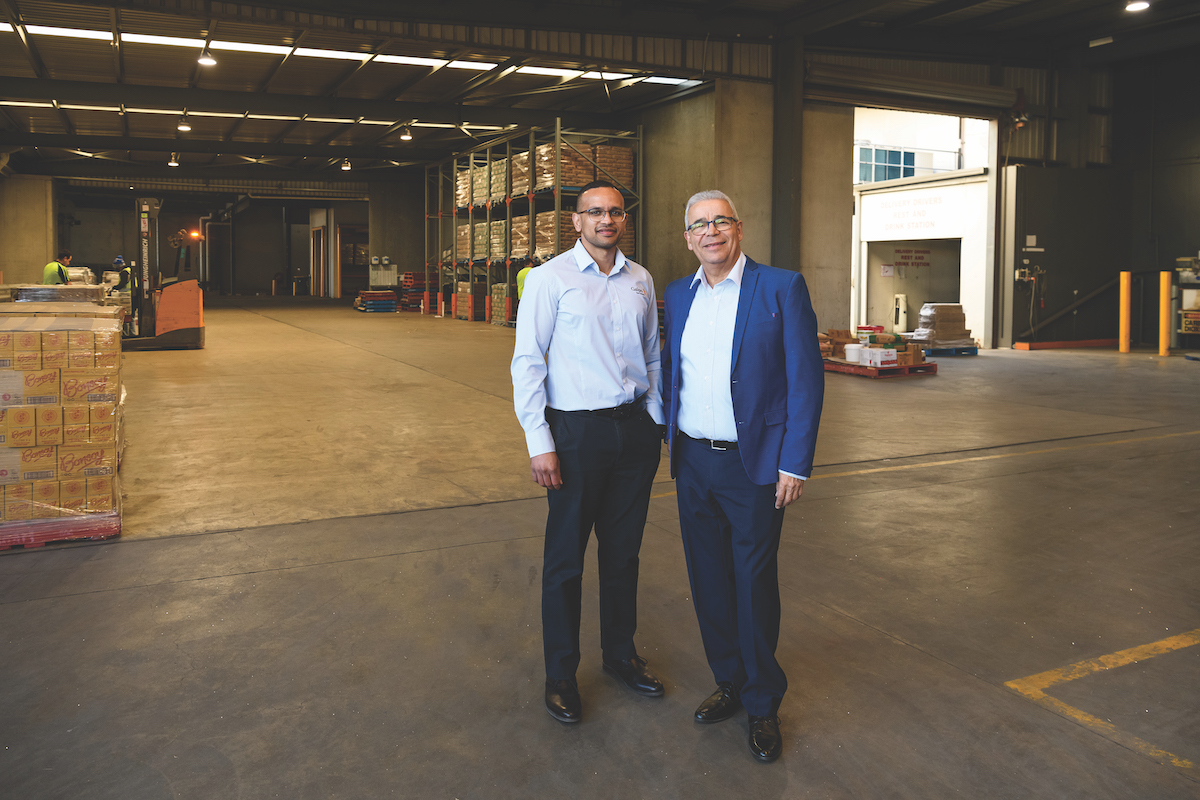 These lessons set the company in good stead for any future challenges, such as the COVID-19 pandemic, which, once again, put the business to the test. It was particularly bad timing as Galipo was fresh from making a significant investment to expand its warehouse facility in 2019, almost doubling its storage capacity to 33,000 square metres with a new chiller, dry and freezer space, five new loading docks and new offices for the warehouse and distribution team.

I grew my business by building great relationships.

“While our turnover declined overnight and a lot of new challenges presented themselves, the situation proved that the right culture had been instilled into the team,” Sebastian ponders. “The team rose to the challenge and showed that they cared about their team and customers.

“We continued to service customers without letting them down due to the challenges we were facing. We continued to support our staff through this time, ensuring that they were all still employed by the business.” With Galipo Foods, Sebastian has found his dream job and, despite the obstacles, his passion for the business has made it a path work sticking to. 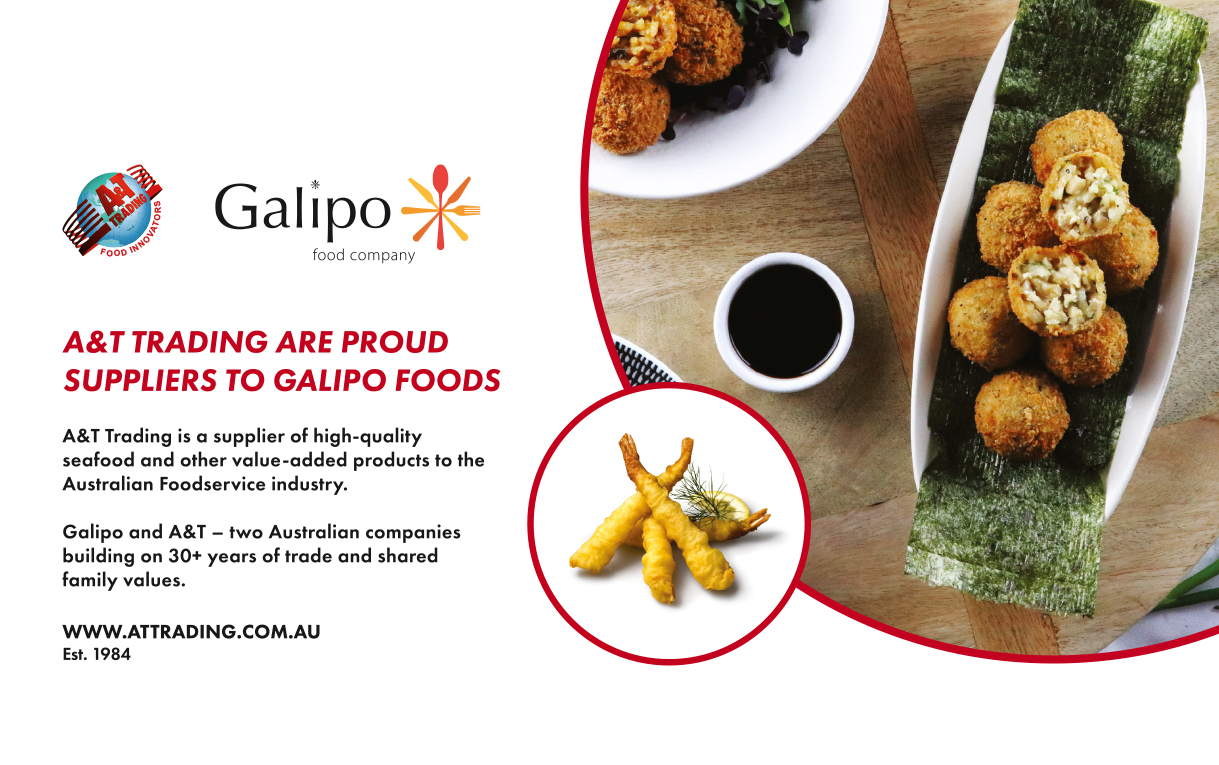 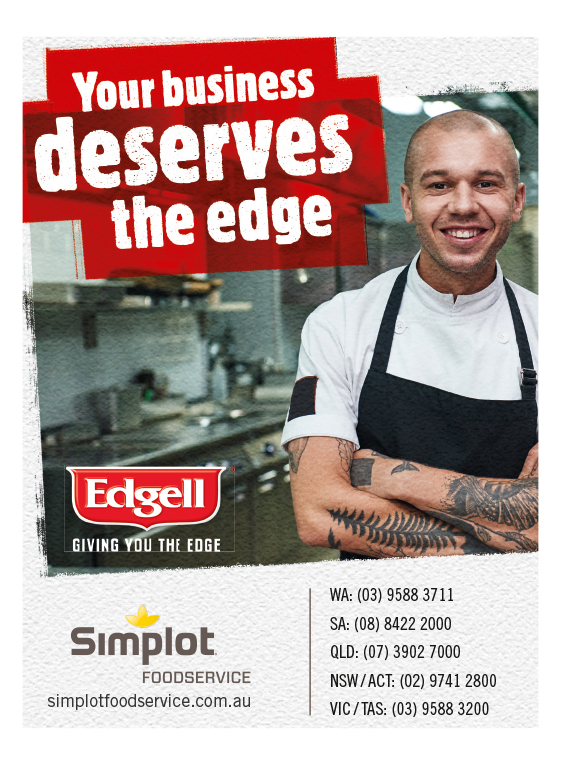 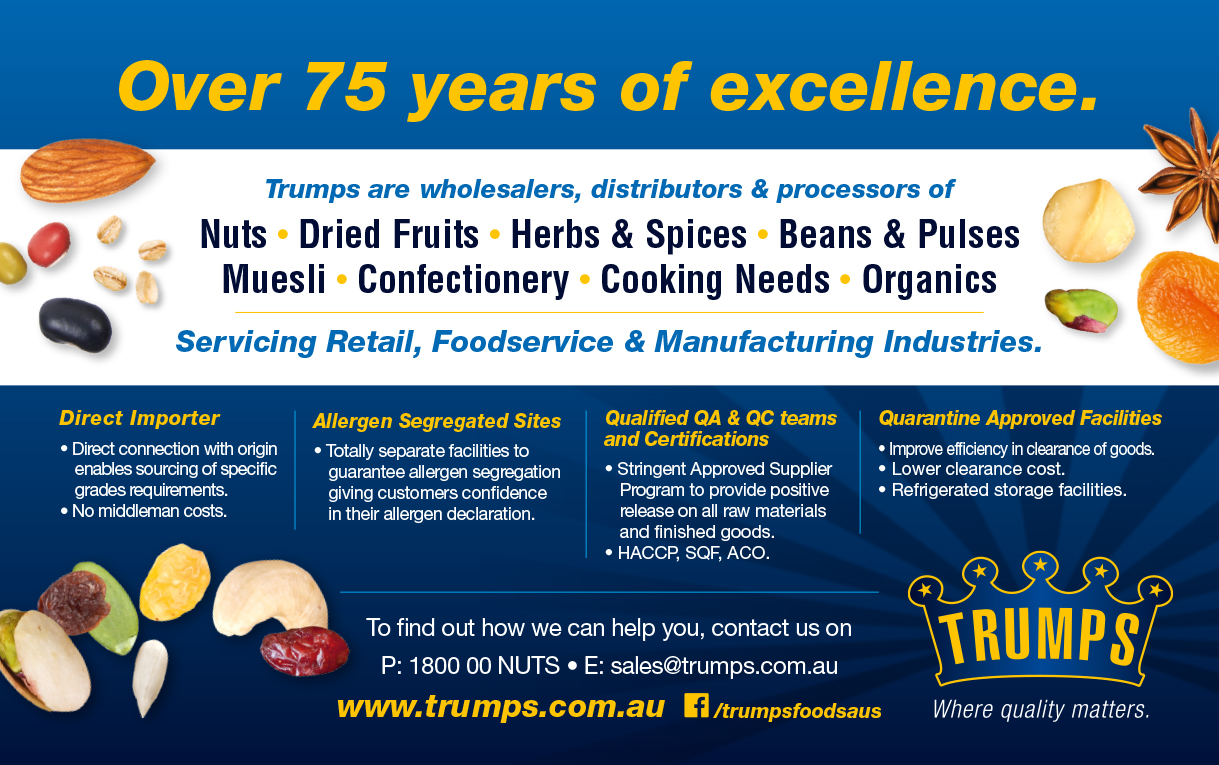