Open Country Dairy is in the milk business, no question. It works in partnership with 1,000 New Zealand independent dairy farmers to turn two billion litres of milk annually into high quality products like cheese, whey powders and milk powders.

This makes Open Country Dairy the largest independent dairy processor in New Zealand. It is also the second largest whole milk powder exporter worldwide. CEO Steve Koekemoer is originally from South Africa and is a qualified mechanical and electrical engineer, which has given him a level of technical knowledge only an engineer could bring to the role.

After managing a number of factories in South Africa and gaining a lot of experience in managing significant capital projects, Steve was headhunted by a packaging company in New Zealand and relocated with his family 18 years ago.

“It was a good move for us,” he says. “South Africa was facing, and still is, a number of challenges and so immigrating to New Zealand was a good opportunity. Particularly because our kids were very young at the time.”

After spending a few years running factories across New Zealand and, for a short spell, Australia, Steve was offered a role with a company that was just getting off the ground – Open Country Dairy.

“When I joined the business back in 2007, it was called Dairy Trust,” he says. “I was one of the first employees but, by that point, I had the experience – a strong operational background and the ability to manage complex problems. As Head of Operations back then, my first role in the business was helping to design, build and set factories up across New Zealand.” 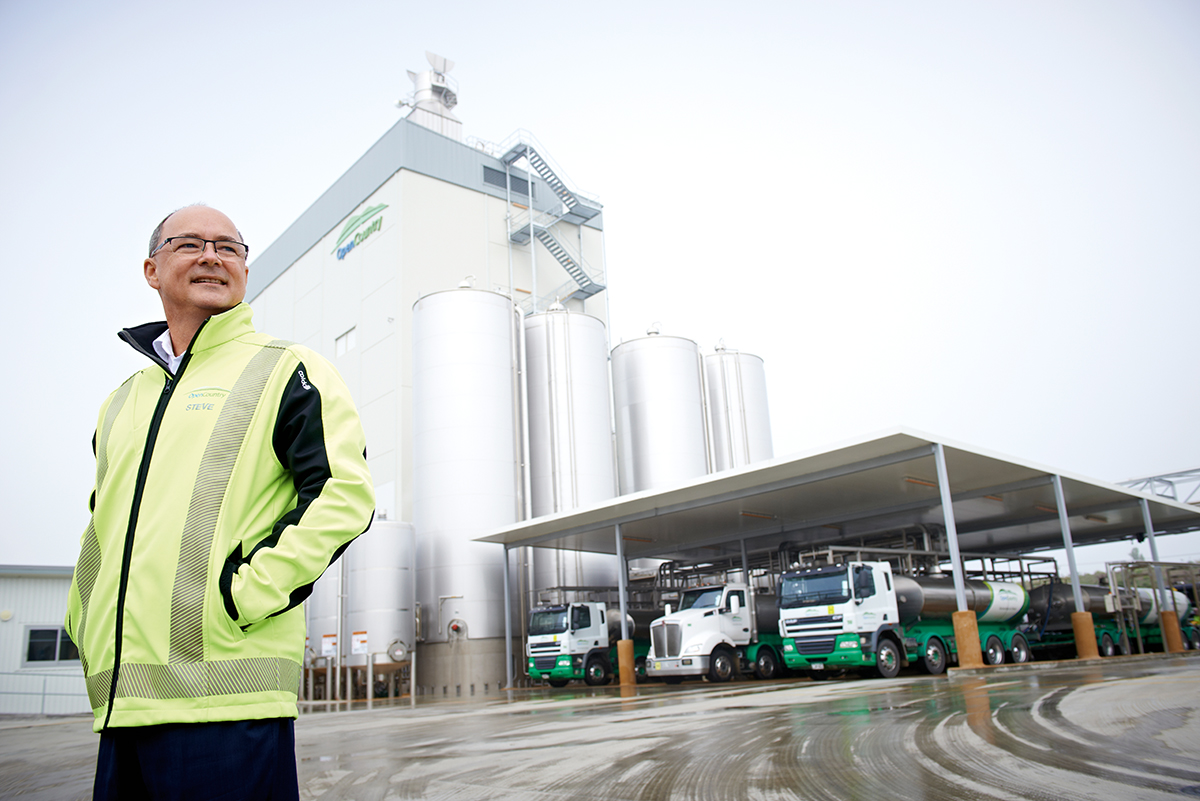 Steve stayed with the company for three years before taking a two-year break (from 2010 to 2012) to run his own successful business building dairy processing plants for Miraka, and also what is now the Danone infant formula factory.

Then, later in 2012, he was offered the role of CEO. “It was a tough decision but at that time Open Country Dairy was looking at a big expansion and so I was well suited to the role,” he says.

“I knew the people in the business really well, I knew the business well and I knew I could add a lot of value. I took the job and have never regretted it. It’s been fantastic being back in the organisation.”

Since coming back into the fold, Steve and his team have doubled the size of the business and are making groundbreaking progress on its environmental footprint. “Environmental, economic and social sustainability has been a big focus of mine for a number of years now,” Steve says.

“I’ve always taken the view that we need to take the right path, not the easy path. When talking with my team, I frequently use a quote by French author André Gide: ‘You cannot discover new oceans unless you have the courage to lose sight of the shore.’ It represents to me that we always need to look for ways to push the boundaries.”

This boundary pushing has led Steve to prioritise the environmental impact of the business and every time a new processing facility is being designed, or upgraded, his team identifies how to minimise its footprint while maintaining a high-quality output.

“Our sites already recycle water but, in our newest facility, we’ve installed a massive water recycling plant that will make the site entirely self-sufficient on water,” he says.

“This means we won’t need to take water from any external source. We’re also putting in the largest electrode boiler in Oceania to generate our steam, as opposed to using coal or gas, and the electricity is 100% renewable in the South Island of New Zealand.”

“Getting those two things to work hand-in-hand has been an exciting challenge. “There are many businesses that have shown you can make an impact and still make a profit, and sometimes you just need to be the business that leads by example. There’s no excuse for business leaders to not look around and find more sustainable options,” Steve asserts.

“Otherwise, businesses will use short-term profit loss as an excuse not to change and, if you look closely, you might find a solution that will deliver both long-term profit and purpose. Spend the time and do it right,” he says.