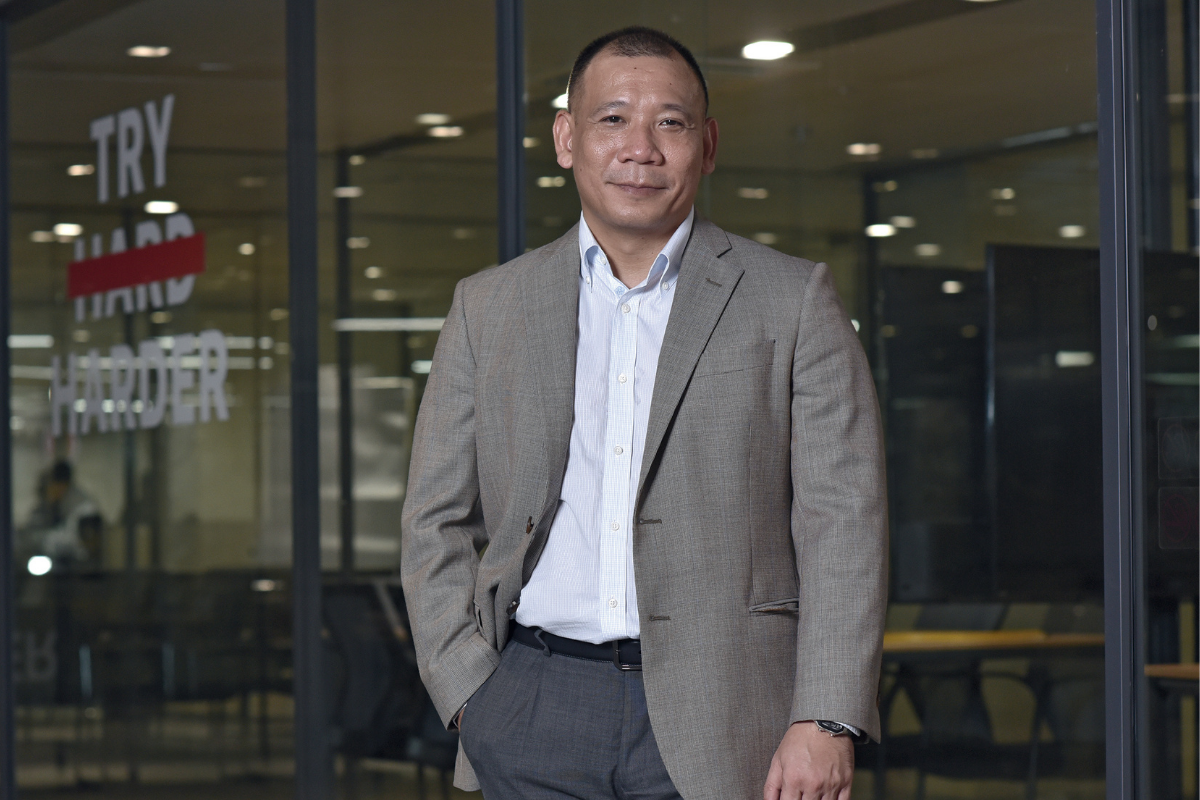 Vinh Dao is used to finding solutions when forced into tough situations. From being stranded as a young man in Russia with no job, nor money, to watching helplessly as COVID-19 forced the closure of hundreds of his restaurants, Vinh never loses sight of the bigger picture.

In fact, it’s his dogged resilience that explains why his plans to open another 40 restaurants in 2020 are still very much on track. It’s a big call, particularly when the CEO of Golden Gate Trade and Service, Vietnam’s leading restaurant chain operator, encountered more than a few hurdles when all 360 restaurants were shut down overnight to comply with the government’s lockdown laws.

“We were ordered to close on 9 March,” Vinh recalls. “Of course, it was very difficult at the time. But we reopened at the end of April and quickly recovered about 90% of business, only to be hit by COVID-19’s second wave in July. Although we weren’t closed down, business dropped to about 70%. But that wasn’t too bad.”

The full impact of COVID-19 on Golden Gate was lessened by the fact that 70% of its 16,000 nationwide restaurant staff were part-time students. With worried parents calling their children back home at the start of lockdown, the remaining 30% of permanent staff were able to be kept on.

“Our students were happy to go too, because many of them work for the tips and not the salaries,” Vinh explains. “When we reopened, they came back.” Despite the months of turbulence and uncertainty thrown at Vinh throughout the year, he remains as buoyant as ever.

Our culture is based on humanity, performance and integrity.

The restaurants feed 22 million people every year. Not bad for a concept that started more as a hobby than anything else. Vinh returned to Vietnam in 2003 following 14 years in Russia and after launching the Cosy teabag business, decided to open “just one restaurant” with a couple of friends.

“I saw the concept of a mushroom hotpot in China and thought it would be fun to open something similar in Vietnam. It was nothing serious, just something to do for a bit of fun,” he explains.

“But it just happened to be a very good time in Vietnam with almost a fever among consumers for food and they went crazy for it. We recognised the potential when we got our money back just four months after we opened, so we opened a second one, a third one and went on from there.”

Vinh sold the teabag business and never looked back, although he often reflects on his time in Russia when his natural instinct for business was triggered by a need to survive.

He was a student straight out of school when he was sent to the Soviet Union in 1989 after being awarded a Russian scholarship to study numerical weather prediction at the Russian State Hydrometeorological University in St Petersburg.

The Soviet Union was one of the first countries to recognise and establish diplomatic relations with Vietnam and the prize of a scholarship after completing high school final exams was highly coveted. 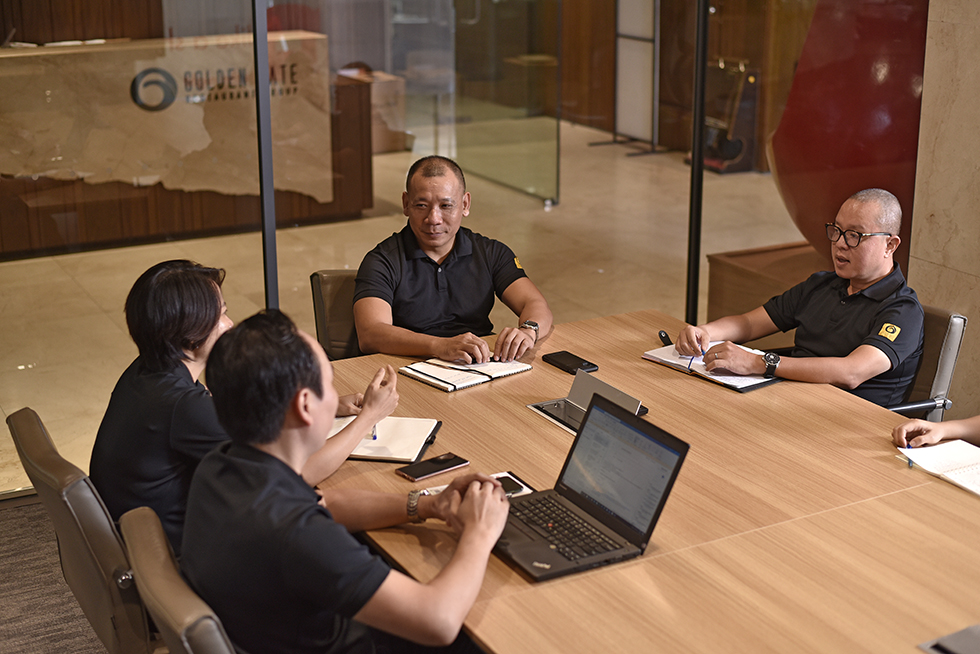 “Yes, it sounds strange, right? But at the time it was very normal because 30 years ago the Soviet Union and Vietnam were the same socialistic countries and, being a poor country, Vietnam received help from the Soviets in many aspects, including education. Every year, 500 of our country’s best students were sent to universities in the Soviet Union and I was one of them. While I didn’t have the chance to select my profession, I applied myself to mathematics and physics, which is why I was sent to the Hydrometeorological University. I loved St Petersburg very much. It’s a very romantic city, and what I learned equipped me with a very sound, logical way of thinking.”

However, two years into his study, the Soviet Union collapsed and funding for Vietnamese scholarships was terminated. With no money and no job, Vinh was forced to think outside the square to figure out how he’d fund the next three years of study. “I had to do something,” he remembers.

“So I started a very small business, relying on an internal network to get goods from outside Russia into Russia, and made just enough money to survive.” Vinh did more than survive, building the business and getting a healthy command of Russian along the way before returning home to take care of his parents and marry the woman he’d been courting during visits home.

“I’d fallen in love with her and we have three teenage boys now.” Today, with Golden Gate restaurants continuing to prosper, there’s no slowing down on its ambitious expansion plans.

In fact, while it’s a silver lining he’s reluctant to gloat over, Vinh concedes COVID-19 has offered Golden Gate the rare opportunity to secure great new locations left vacant during the pandemic.

“Landlords need new vendors and we’ve taken the opportunity to move to better locations,” he says. “We were always working towards having 400 restaurants by the end of the year and we’re still heading towards this. Over the next five years, the plan is to have 1,000 restaurants running. It’s a realistic target considering we usually average up to a 30% growth each year.”

At the same time, Vinh is aware that running a huge chain of restaurants is reliant on people. COVID-19 aside, he says the greatest challenge has always been finding the right staff and retaining them. Well aware that Golden Gate is often the first working experience for young people, Vinh ensures there is guidance available to help them progress steadily.

“Our culture is based on humanity, performance and integrity,” he explains. “Golden Gate is the cradle where young people learn, develop themselves and confidently develop their careers. It is often their first income, which helps them become financially independent, to help them pay for their own education and life and we want to provide those first steady steps.” 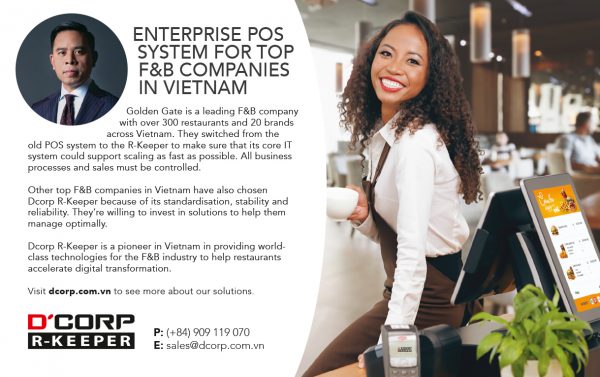