We are an example to the world: Warden Zuketto Warden Zuketto once spent four months in Mexico developing a strategy for Heineken’s draught beer. Now, as CEO of Farm Frites, he’s growing potatoes in the Sahara Desert in Egypt. “I think everyone agrees that beer and fries go great together,” he says airily about his career choices.

Yes, but can we go back to the part about potatoes in the Sahara Desert? “The Egyptian government decided that that was where we could build our plant, so that’s where it is,” Warden reveals. “There aren’t even roads, but it’s the most efficient factory we have.”

Besides the Sahara Desert, the company also grows potatoes in less surprising areas, including Poland, China, France, Argentina and the Netherlands. Explaining the diverse growing regions, Warden says, “We want
to spread the risk globally so that we can guarantee supply even during crop failure or a potato disease.”

Together, the farms produce around 1.5 million tonnes of potatoes annually, which are then processed into fries and other finished products for export to more than 100 countries.

This impressive volume is achieved through clever growing strategies and heavy investment in R&D. Until 1994, the only potato variety that was used to make fries in Western Europe – and therefore Farm Frites – was the bintje. Today, however, the company cultivates several varieties, the five most common of which include the russet burbank, innovator, santana, fontane and agria. Each variety is selected for its yield, adaptability to the climates where Farm Frites has its farms, and shape – elongated potatoes that are wide at the top and bottom give long, consistently shaped fries and are preferred.

To determine a variety’s adaptability to different climates and soil types, it is planted in test plots at Farm Frites’ various production locations. It may take up to eight years before a variety completes the various stages of the stringent selection process and is deemed good enough to become a Farm Frites’ staple.

Warden illustrates the process with a real-life example:

“We have already been growing potatoes on test plots for three consecutive years in Kazakhstan, where we don’t even have a plant. We want to first determine the right varieties to grow, as well as where the best fields and crops will be. That will influence where the plant will be. Transporting potatoes to the plant can get expensive, so we prefer to have them close to, or even right in the middle of the crop fields.

“In potato agriculture, we are an example to the world,” says Warden with pride. “When choosing new varieties and growing stronger, bigger potatoes with fewer defects, we don’t use genetic modification. We do it all in a sustainable way.”

Achieving high yield for potatoes in locations the potato plant is not endemic to without modifying the nature of it is undoubtedly challenging, but technological advancements have certainly helped Farm Frites in its quest. “Using data collected from our production facilities we now know how best to react to changes to temperature and water needs. We’ve never been able to do this before,” says Warden.

But although the company can grow certain varieties of potatoes in unexpected locations, it doesn’t mean it should. “Our main customers are global chains, such as McDonald’s and KFC, and they want products coming
from all over the world to taste the same,” Warden points out. “So, with new varieties, we collaborate with them to ensure that the finished product has their approval before we move into mass processing.” Farm Frites also creates customised products for clients, such as fries shaped like Lego bricks for Legoland.
It’s not just the approval of big chains that is important to Farm Frites. Today’s individual consumer is more health-conscious than ever before; never have nutritional labels been more instrumental in swaying buying decisions. This is why the firm recently released a selection of chilled fries that are pre-fried in sunflower oil instead of palm oil.

Sunflower oil is widely regarded as more environmentally sustainable to produce and, in addition, is lower in saturated fats compared with palm oil.

“It’s not something you eat every day, of course,” says Warden. “But our fries are actually quite a healthy and natural product, especially if eaten without a sauce. The potatoes go directly from the field to being processed into fries. We don’t add anything else to them, so the fries still taste great on their own; you can really taste the potatoes.”

Since its founding in 1971, Farm Frites has grown into a multinational business, but it is still a family-owned firm, and continues to operate with the ethos of one.

It handles every stage of production itself instead of outsourcing. “We run the whole production chain, from field to fork,” Warden reveals. “We have our own potato fields, factories, sales offices, marketing departments and even restaurants.”

“There’s a lot of passion in the company, from the owner to the people down the line. Everyone really cares about the products and the brand. I love visiting every plant and every farm, seeing the same passion from the growers and the people who work for us all around the world. They treat the potatoes like their own babies.”

And of course, Warden never turns down the chance to enjoy the fruits of his labour, whether hot from the oven at home or served by wait staff. “My favourite has got to be anything from our Finest range,” he confesses. “Food plays a central role in everyone’s life; that’s what makes my work so interesting. It’s all about friends, fries and fun.”

Sustainability and social initiatives at Farm Frites around the world.

Employees were encouraged to commute to work by cycling in a friendly competition. The distance cycled by each individual was tracked using Endomondo, a social fitness app.

71% of the firm’s carbon footprint comes from transportation. This figure can be reduced by increasing the load taken on each delivery, thereby reducing the number of trips taken. In Egypt, the yearly deliveries made between Farm Frites and a client was reduced by five times simply by stacking boxes of finished products in a different way on pallets, which allowed more boxes to be carried on each pallet.

Farm Frites employees took part in the Alpe d’HuZes, an annual fundraiser for cancer research. During the event, participants typically cycle up the Alpe d’Huez mountain six times in a single day.

A co-generation unit, which generates electricity and heat in just one device, was installed at Farm Frites Lommel. The system allowed the production facility to meet its own energy demands as well as sustainably process baking vapour and biogas.

In a program called Tour de France, visits were made to Farm Frites growers in Poland, Belgium and Netherlands to study and share sustainable practices at these locations. 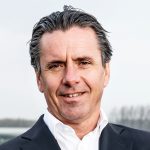