I believe in leadership by example: Gina Marie Angangco For more than 20 years, Deputy CEO and Senior Executive Vice President Gina Marie Angangco has dedicated herself to Armscor Global Defense, in spite of the difficulties faced by a woman in a primarily male industry.

Initially working for the manufacturer’s holding company as a comptroller, she’s risen through the ranks, holding multiple senior roles, including President and CEO of Armscor’s retail-focused subsidiary. Given the persistence of the gender gap, Gina’s career to date is quite an achievement.

“Despite being in a male-dominated environment, I’ve managed to maintain my femininity and personality,” she says. “I’ve gained the respect of my colleagues and industry partners, while bringing in a culture of excellence and open-mindedness at work. With humility, a spirit of service and spiritual strength, I’ve tried to encourage others to embrace those same principles. More women are entering this field.”

It’s easy to see why Gina has been referred to as the “heart of the company” by Chairman Emeritus Demetrio Tuason; praise that Gina considers a great honour. After all, the satisfaction and passion of the Armscor team are among her greatest concerns.

“I believe in leadership by example,” she explains, “and opening the lines of communication so the team understands the mission and the various options to reach the mission. Armscor promotes a family atmosphere that cultivates loyalty and cooperation.”

“Armscor promotes a family atmosphere that cultivates loyalty and cooperation.”

Each month, Armscor employees are treated to a lunch in celebration of those whose birthdays fall in that month. Employee engagement extends far beyond social outings, however, with the Armscor team encouraged to share their thoughts and perspectives.

But rather than making vague promises towards this ideal, the process has been institutionalised in a monthly conference between Gina, the COO and a cross-section of 10 employees. The gathering, known as kapihan, kainan, kwentuhan (coffee, snacks, stories), gives the team the opportunity to express their views to the upper echelon of Armscor.

Perhaps it’s this commitment to inclusive leadership that has helped Armscor achieve such profitability and success in recent decades. As well as the retail subsidiary Gina leads, which has spread to 10 locations across the Philippines, she also helped create a division within Armscor dedicated to handling government project bids for foreign manufacturers.

Using Armscor’s domestic expertise, the group expanded from three to 20 employees headed by a Senior Vice-President, and is likely to be spun off into a separate indent trading company.

“Once we’d shown the ability to manage, institute changes and lead the team towards a more efficient and progressive operation,” Gina explains, “the owners started adding responsibilities within the company. Eventually, it led to the formation of new subsidiaries to expand the reach of Armscor and provide more products and services to growing and emerging markets.”

In 1972, former Philippine President Ferdinand Marcos declared martial law, forcing Armscor to look to international exports, starting with fellow Asia–Pacific nation Australia. Today, the manufacturer exports about 80% of its products to 60 countries around the world, with the US being the largest.

The result is that Armscor does not have to rely on the Philippine market alone for survival, thanks to this substantial international focus, but Gina now hopes to boost Armscor’s presence domestically. Armscor is aiming to see the local defense industry achieve self-reliance, given that the Philippines often experiences difficulty in sourcing matériel. With a continuing economic boom across numerous industries (including many clients of Armscor), the path to this goal has been paved. Not only will the manufacturer’s products see demand increasing domestically but so will demand for its expertise and training capacity.

“With these opportunities, the challenge is meeting the demand in a timely manner,” Gina says. “We’ll need to balance the current production capability and financial capacity with our expansion plans as far as the quantity and quality of new products are concerned. Most of the raw materials are not manufactured in the country and need to be imported.

“This needs careful planning, based on the capacity of the foreign supplier, the availability of transport and the policy changes of foreign governments that sometimes deny supply to the Philippines. This is where the reach of the United Nations Arms Trade Treaty and the resulting Strategic Trade Management Act need to be considered carefully before ratification.”

Internally, Gina retains a focus on empowering and engaging her team to improve efficiency and introduce innovation. She believes there’s always a better way to do things and, within a rapidly changing technological and economic environment, the effort to avoid falling into a routine is critical.

“It is often said that the biggest room in the world is the room for improvement,” Gina says. “To ensure an efficient use of resources, planning is essential. The team needs to understand the plan in order to execute well.

“It is often said that the biggest room in the world is the room for improvement.”

“A plan should incorporate the good ideas of other team members. The team should be equipped with the tools needed to perform their task. With each person contributing, synergy will result in increased productivity. I feel that leadership by example is important in having the team buy into the mission.” 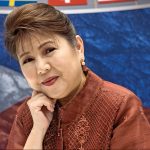