The Murray River, meandering between the twin cities of Albury and Wodonga on the New South Wales border with Victoria, creates a natural divide that provides the lifeblood of water to one of Australia’s most fertile agricultural regions.

The two cities are in many respects as one, with locals living, working and socialising on both sides of the river in a common community. That is, until COVID-19 struck. The border crossing between Albury and Wodonga, blocked for the first time in more than 100 years, came to symbolise the difficulty of stemming the spread of the coronavirus.

It also highlighted the sometimes-fractious relations between Australian states as Victoria and NSW went their own ways in dealing with the pandemic.

The CEO of Wodonga City Council, Mark Dixon, had been in the role for a little more than a year when the pandemic struck but instantly swung into action to solve the interminable problems the shutdown created for local residents and visitors alike.

Fortunately for Wodonga, and indirectly for Albury too, he was able to call on his three decades of experience as an army officer, including active duty in Iraq and Afghanistan, to devise a comprehensive strategy to overcome the innumerable issues.

“We are one community and two cities in two states, separated by a river,” he explains. “So to have different restrictions on one side of the river to the other – to have people who work on one side of the border but live on the other side, for students who live on one side and go to school on the other, and a shared hospital, which is focused on the Albury side – it was a very difficult and frustrating time for sustaining Wodonga residents and Victorians.

“The council advocated strongly to make some of the restrictions more reasonable for those people in terms of essential work, study and health care.” There were times when the border closure caused great frustration because Wodonga businesses were hit with such severe restrictions compared to their Albury counterparts.

“What we saw was a lot of people going across the river to do their business or hospitality in NSW rather than Victoria. There was frustration, but we understand why it had to be like that,” he concedes.

Mark points to the many lessons learned in that time. Its immediate responses to COVID-19 showed how a local government can remain strong and confident in its messaging. While much of the community had to shut down, local government and council stayed open and continued to provide essential services to the community.

Before COVID-19, the region also had to contend with devastating bushfires. During this whole challenging period, the council has not laid off any workers, although they did have to find redeployment opportunities for some.

It’s been a really challenging year for everybody. I’m proud of the way we responded, and it talks a lot about the community that we live in.

The council’s workforce and its willingness to be adaptable and agile for the community was a highlight for Mark through the bushfires and the pandemic. “I think they’ve been fantastic in their response,” he says of his team.

“The bushfires had a massive impact on this region and certainly for me, highlighted the benefits of community. All our surrounding shires and all our community really came together through the bushfires and united.

“While we weren’t directly impacted by those fires, Wodonga did run some of the major relief centres for the fires in the Towong and Alpine shires, so it was a busy time for us, and we went straight from the bushfires into COVID-19. It’s been a really challenging year for everybody. I’m proud of the way we responded, and it talks a lot about the community we live in.”

Through it all though came a realisation that the crossborder community had pulled together as one and had overcome the hurdles that threatened to pull them apart. “It’s a fantastic working relationship,” Mark says.

“We have something here called Two Cities One Community – that’s the shared council committee represented by councillors and council officers. So we work really closely together as two cities and one community because we recognise that it just makes good sense to do that.

“It doesn’t mean that we agree on everything, but we certainly have a very good relationship when we look to do things together. It goes back to the challenges of running any business – we need to be efficient and effective, so where we can develop partnerships or shared service arrangements with Albury, we’ve sought to do that at every opportunity, and it works well for both councils.” That working relationship is key to an agreement, called the Albury Wodonga Regional Deal, created and led by the federal government, with the two state governments and two local governments working together to investigate transformational opportunities for the region.

“When we talk about COVID-19, what’s been really good for us is looking at the opportunities and recovery options coming out of it,” Mark shares. “I think there is a really exciting vibe in Wodonga – we’re a youthful city and we’ve undergone some significant transformations in the past couple of years.

“We’ve redesigned our High Street and created a fabulous city centre with the development of the old railway station. We’ve got some amazing new developers coming into town from Melbourne and Sydney, creating high-rise opportunities, and we’re seeing real interest in people wanting to live and work in Wodonga.

What people have realised is that regional Victoria, and regional cities generally, can offer the best of both worlds.

“Commercial and business interest from the cities has never been stronger, and our residential growth is going through the roof. What we see is a real opportunity to bounce back quickly from COVID-19. What people have realised is that regional Victoria, and regional cities generally, can offer the best of both worlds – everything that a big city can, but we’re on the doorstep of some beautiful countryside.”

The role of CEO in a regional council is central in setting a code of standards and a workforce culture. These lay the foundation for a cohesive team looking beyond day-to-day grievances.

Mark points to a quote from former Chief of Army David Morrison – “The standard you walk past is the standard you accept” – which he took to council to drive home his positive message of the need to work as one team, playing to each other’s strengths, looking after each other and calling out poor behaviour.

A distinguished military service is the bedrock of Mark’s personal approach to leadership. A graduate of the Royal Military Academy Sandhurst, England, in 1985, his service spanned 20 years including commanding bomb disposal teams in the UK before he was seconded to the US Technical Intelligence Services in 2001 during the September 11 attacks.

He was a squadron commander during the Iraq War before joining the Australian Army in 2005 where he worked in the Counter IED Task Force, served in Afghanistan, was promoted to Commanding Officer of the Army School of Ordnance and as a Colonel was the Director of Logistics within the Land Systems Division. 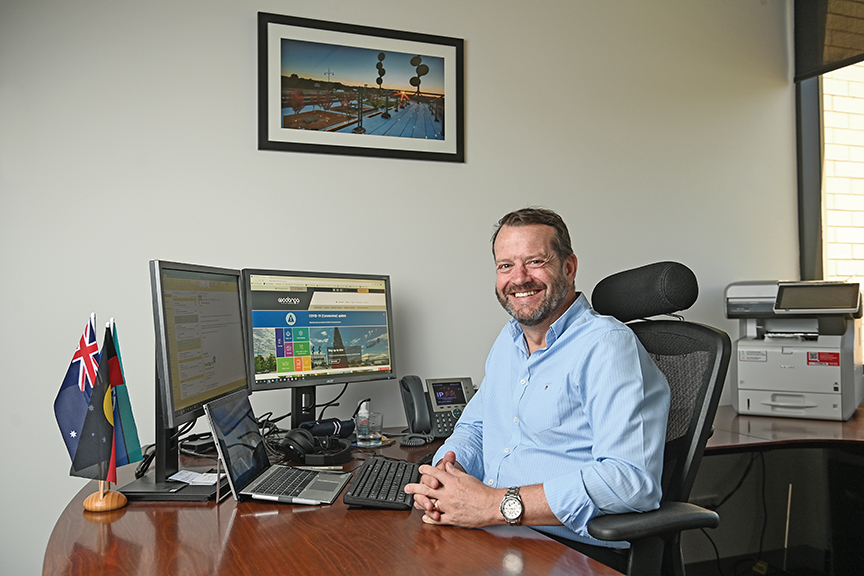 He left the military in 2015 to take on the role of CEO at Wodonga TAFE and relished both the career opportunity and the personal challenge. His four years in the role saw the TAFE win state and national awards while connecting him with the local community, businesses and politicians, and community and sporting groups.

“I felt that the transition was quite easy because I was already connected to the community,” he says. “But what I honestly didn’t expect was I thought I’d have some time to learn the nuances of local government. It’s a big transition from the TAFE world, but we were all really thrown into the deep end with the bushfires and COVID-19.”

Mark’s predilection for cultural change is evidenced in the shift in community attitudes towards the council. “Culturally, we’ve come a huge way. When we know something is wrong, we put our hands up straight away, we acknowledge it and look at how we put it right,” he says.

“We are honest with our community, we engage them in an open way so that they know they can trust us, and we can teach our workforce that it’s OK to make mistakes. We are not perfect but our intentions are always genuine. That’s how you learn – by making mistakes – and that’s how you create and support innovation and change in an organisation. We have to have a workforce that is prepared to try something new. I personally spend a lot of time walking, talking and listening to every part of council.”

Mark considers himself a good listener, and thinks that listening broadly to the community, businesses and everyone in an organisation before jumping in to make changes is vital. “I hope people will see me as somebody who is authentic and genuine,” he says.

“People talk about an open-door policy, walking the floor and chatting to everybody – those things do take time, but they’re never a waste of time.” A life of learning has taught him other lessons that reach internally.

“I’ve learned the importance of my own wellbeing, and I’ve also learned that when you talk about wellbeing to your workforce, if you’re not looking after yourself, they’ll see that. It starts at the top, and you have to demonstrate that you look after yourself if you want them to look after themselves. We made a real push on wellbeing here this year at the council.”

After a military life of moving regularly, Mark’s relocation to Australia in 2005 was “a massive leap of faith” with his wife and two young children. They had never been here and Wodonga was his first posting.

“Australia has become our second home,” he shares. “I didn’t think we’d stay here, but I think it says a lot about our regional Victorian community. They made us feel exceptionally welcome. We’ve made some lifelong friends here. I’m really keen to give something back to this community that’s become home for us.”

“It’s a major step and lifestyle change, but I do think the military training sets you up well. Employers worry about what skills and attributes they’ll get from somebody who has a military background.

“My military background taught me a lot about humility, moral courage, leadership, character and teamwork. All of these skills are massively transferable into any organisation and can be a tremendous asset. I think people just need to give a go to military folks who are transitioning to a civilian career. They’ll be loyal, committed and do a great job.” 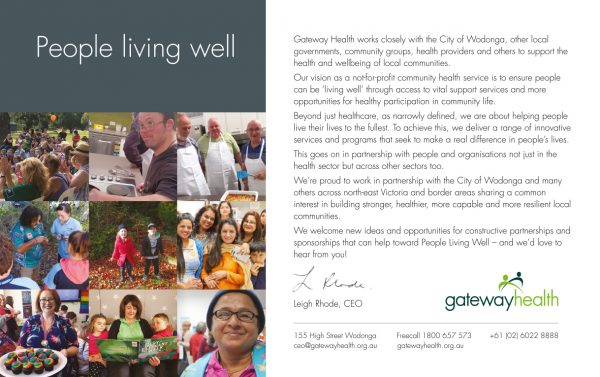