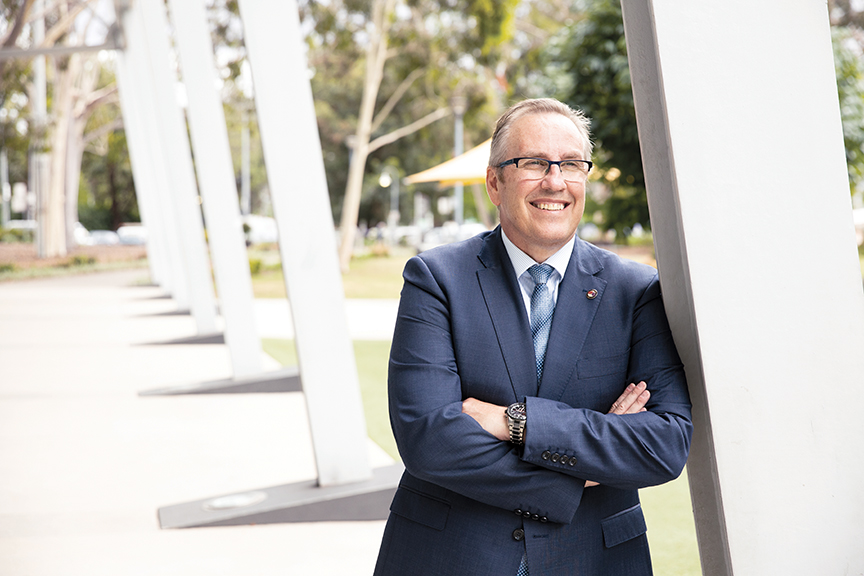 The measurement of success within city councils is unique. Often, the bottom line has a family, a future, a standard of living; invariably, it has a face. In council, if you’re not working for the people, you’re not working.

And when you are, the feeling of satisfaction is also entirely unlike what you might experience elsewhere. “I got this lovely letter yesterday,” says Penrith City Council General Manager Warwick Winn.

The letter, from the District Cricket Association, thanked council for not charging for field hire during COVID-19, and said they’d passed on a 25% reduction to all of the small cricket clubs in the city.

“I just thought, ‘What a positive outcome, but thank you for taking the time to say thank you.’ That’s telling me we’re doing things right.” The wide-reaching responsibility of councils means they’re often made into whipping posts for any shortcomings.

A council’s success can be taken for granted, but in areas like Penrith where community is a powerful cohesive, a job well done is always appreciated. “Even though there are different political hues within the region, ultimately it’s all about Penrith,” Warwick says.

“It’s all about the community.” Bordered on one side by an ever-growing suburban sprawl and on the other by the vastness of the Blue Mountains, Penrith occupies a special place at Sydney’s table. It’s the beating heart of the city’s western suburbs, and by its geography alone presents a unique set of challenges to council.

Primary among these is heat; far from the coast, Penrith’s citizens are faced with scorching temperatures summer after summer. “People don’t realise how hot it is until they come out to Penrith on a January afternoon,” Warwick says.

“It’s like the Sahara. It can be blistering.” The summer of 2019–20 was the hottest on record, with temperatures of up to 48.9°C searing the Western Sydney suburb in early January. In response, Penrith City Council held a masterclass on keeping urban areas cool. “It sold out within a fortnight,” Warwick says.

We’re in control of our own destiny in Penrith.

“It really resonated.” In fact, the efforts Penrith has made to beat the heat, such as increased tree coverage and footpath treatment, have been used as a model for other councils, but Warwick insists there’s much more work to do.

“We’ll revisit the masterclass. We also need to get the state government to work with us for a much more sustainable future.” Penrith – and Western Sydney as a whole – has often been earmarked as the future of Sydney’s urban growth.

Development and jobs associated with the long-gestating Western Sydney Airport at Badgerys Creek (due to open in 2026) have accelerated that reality, Warwick says.

“I think we’re in control of our own destiny in Penrith. There’s a ton of growth happening already – you can see the place changing around us every day. The state government is spending billions on infrastructure, and land values are set to accelerate as people realise Penrith is the city closest to the airport.”

For Warwick, it was the perfect time to take the reins at Penrith City Council. After a long stint at North Sydney Council, he spent two years as CEO of Manningham City Council, then in mid-2018, he stepped into the role of General Manager at Penrith and found himself in charge of a stable, collaborative and proactive council.

“Penrith was a great place already, but I think it really benefited from a fresh set of eyes at the senior post and an injection of, ‘We can do it better.’ That’s what’s set us up to handle the growth we’re seeing now.”

When COVID-19 hit, it only served to bring the community – and council – even closer. “They say the worst situations bring out the best in people,” he says. “I was determined at the outset to put my people first, and a wellness survey we conducted about three months in showed 96% of staff felt supported by their managers and the organisation. That brought a small tear to my eye.”

The determination, compassion and innovation Warwick and Penrith City Council have brought to Sydney’s new colossus has built up the momentum to drive it far into a bright future.

“It’s been really hard going, but we’ve been strong,” he says. “None of that’s going to change. The world doesn’t stop spinning, but the organisation’s in good health in terms of ” being able to deal with it.”