At Blackmores, business really boomed in 2015. Its share price at the start of the year was around the AU$30 mark. By year’s end, the business had made major inroads into the Asian market, The CEO Magazine had crowned Christine Australian CEO of the Year, and Blackmore’s share price had cracked AU$200.

Reflecting on winning the award, Christine admits she didn’t expect the enormous effect it would have on the business.

“We have received so much response to it—to be completely frank, it’s been absolutely overwhelming,” Christine says. “When you are the CEO and you win something like that, as an individual it’s incredibly humbling—but it actually means something for all the staff. Everybody at Blackmores knows it’s the team that delivers the result, and on the night I said that. I had a lot of my leadership team with me, and I said, ‘I actually couldn’t have done this without you all’. Our number two competitor for our Australian business was also up for an award, and I thanked them too, as it takes a strong competitor to make a strong company. So it’s an element of pride—not just for me but for all our staff and my chairman as well, because we are all in it together.”

Christine has also noticed a fair amount of success by association. “It made a difference to our partners too,” she says. “Last week, we held a supplier conference here at the Blackmores campus. We had 125 people from all around the world who are suppliers to Blackmores and talked to them about our strategy and our goals—what’s worked well in the past year, and the areas where we felt we needed to work better—and we discovered that a lot of them used the award in their own marketing. They could proudly say that they supply to Blackmores, who won CEO of the Year and are the biggest brand growing in Asia.

“Actually, I met the Deputy Prime Minister of Malaysia the other night, and one of the first things he said to me was, ‘Christine, I believe you were CEO of the Year last year in Australia. How fantastic is that?’ What a great way to start a conversation with a member of government from another country!”

For Christine, opening doors in Asia is incredibly important. When she first started in the role at Blackmores, she knew that the Asian market was the perfect target. “The thing about Asia,” she says, “is that you don’t have to persuade anybody about the benefits of natural health therapies; it’s almost philosophically in their DNA. In China, they have grown up with traditional medicine, which is so closely aligned to natural health.” She was right: massive sales in China helped Blackmores achieve net profits for the 2015 December half to AU$48.3 million, compared with AU$18.62 million for the same period in the year prior. 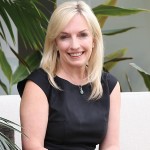