Solid and steadfast in the face of crisis: Deepak Prakash Mahara 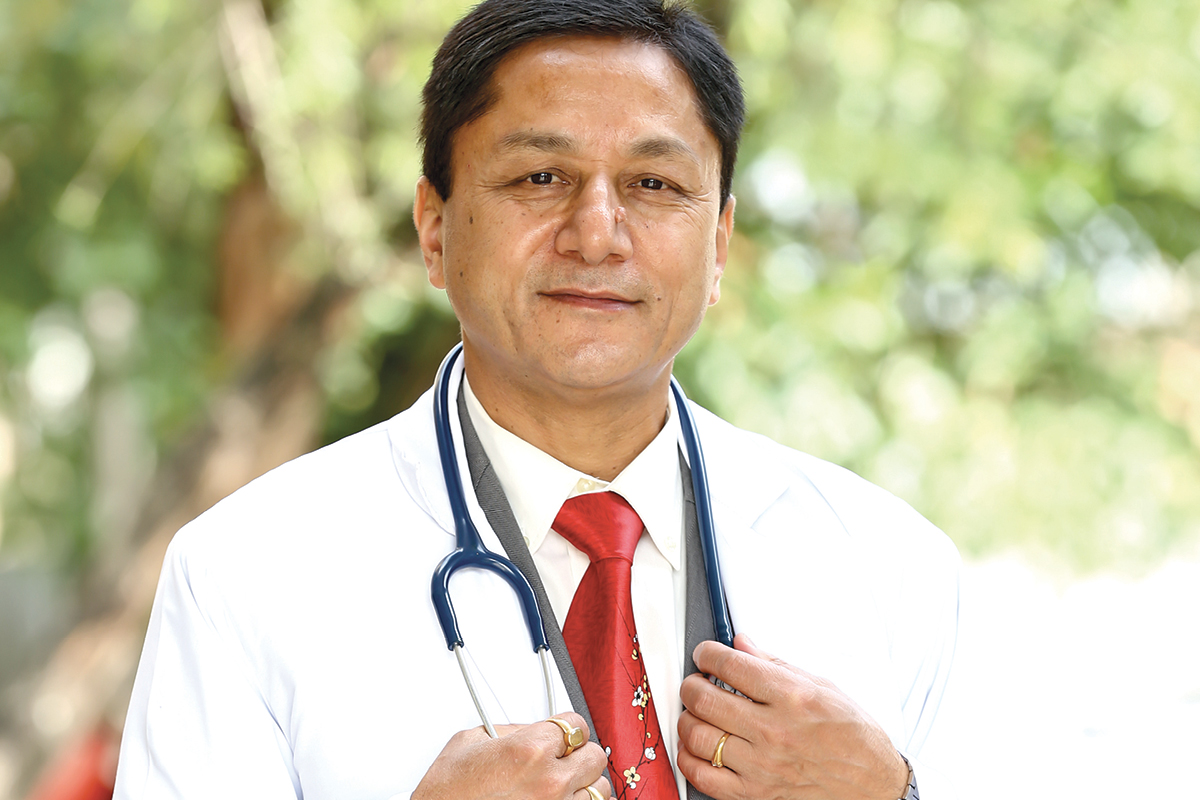 Dr Deepak Prakash Mahara, a graduate of the Postgraduate Institute of Medical Education and Research, in Chandigarh, India, is no stranger to crisis. When accepting the position of Executive Director of the Tribhuvan University Teaching Hospital (TUTH) in 2014, Deepak was thrown into the deep end: the hospital was in the middle of a financial crisis, and a natural disaster in 2015 added to its difficulties. When Deepak’s four-year tenure finished in July 2018, it had shifted from a negative to positive balance, with a surplus budget worth US$5 million.

Established in 1983 with the support of the Japanese government, TUTH forms part of Tribhuvan University’s Institute of Medicine (IOM), in Maharajgunj, Kathmandu, Nepal. The practical elements of IOM’s academic programs take place in the hospital, but it also functions as a national hospital, providing health services at a tertiary level, and conducting research projects that valuably contribute to biomedical and health sciences research in Nepal.

The hospital has grown immensely over the past 35 years, from 301 beds to 750 beds with super specialty services. However, its growth has not always been accompanied by an increase in human resources. As a public hospital, it cannot charge to cover increasing costs, and in 2014 it was evident that funds would not cover the development of better health services, improvements in equipment quality, and increases in staffing. The hospital was struggling to even cover its existing staff’s salaries. “When I became director,” Deepak tells The CEO Magazine, “my first goal was to bring it out of financial crisis. I tried to discover the underlying cause, and found that the biggest contributing factor lay in human resources.” So, he knew he needed to formulate a plan, and quickly.

Deepak faced a tough battle with the government to get the human resources needed. He acknowledges that “it is very difficult to get the kind of resources we needed to be approved by the Ministry of Finance”, and his ability to procure even a third of the additional resources required was celebrated as a remarkable achievement for a university hospital. Having started to tackle the problem of human resources, Deepak turned to improving the quality of the hospital’s equipment, facing further constraints in having to follow a public procurement system. It was common practice to engage in a slow process of acquiring new equipment, technically capable but at the cheaper end of the spectrum. Things would change, however, in the wake of the next crisis.

On 25 April 2015, an earthquake registering 7.8 on the moment magnitude scale hit Nepal, with its epicentre in Barpak, Gorkha. Building collapses were rife in Kathmandu, with avalanches and landslides occurring in the surrounding areas. More than 22,000 casualties were recorded, with a death toll of almost 9,000. Buildings in most government hospitals in the capital, as well as those forming part of the private hospitals, were damaged in the quake, and only TUTH remained fully functional. “We were so lucky,” Deepak acknowledges. “The hospital is an earthquake-resistant structure, built 35 years ago with the help of the Japanese government and their technology. Out of all the hospitals in the region affected, ours was the only one that could cope with the injured. Other hospitals could not because their buildings were not safe.” 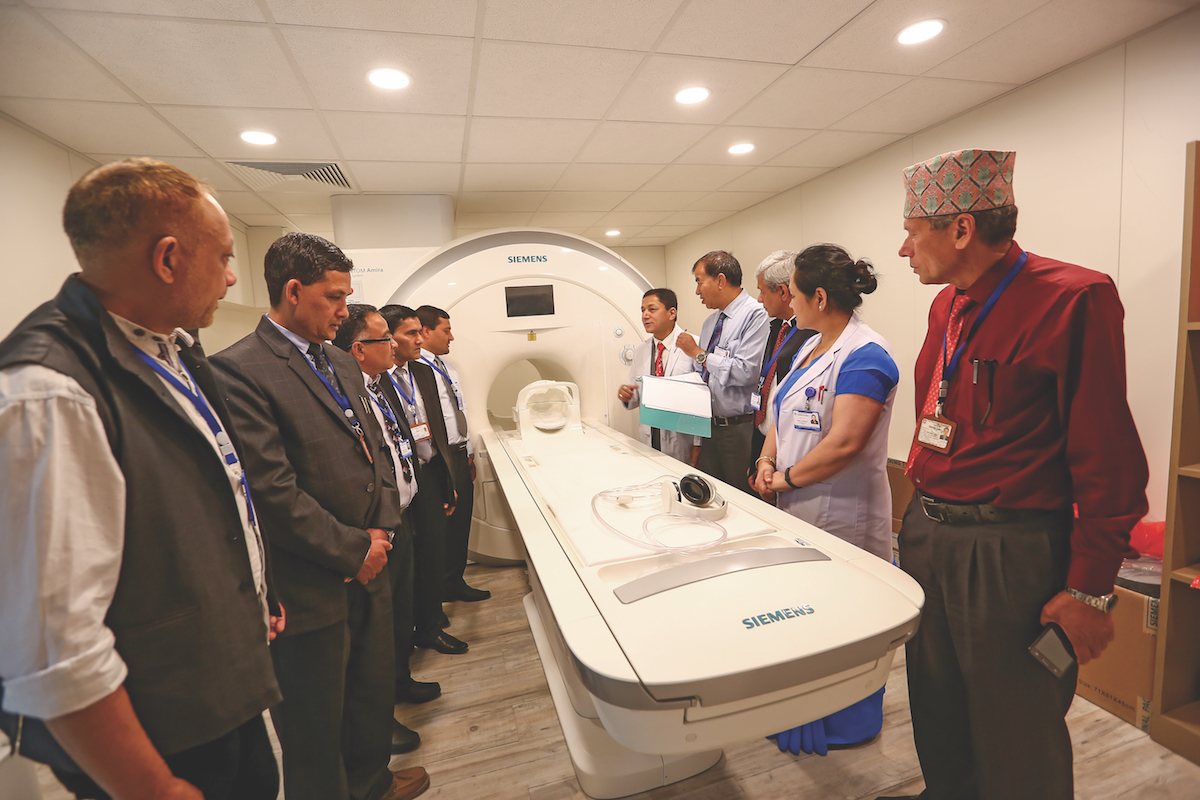 In the immediate aftermath of the earthquake, before the devastating aftershocks, TUTH had four operating rooms running, extending to eight by the first night. Over the following 20 days, 1,723 earthquake victims were treated at TUTH, with 478 major surgeries carried out.

As well as the work taking place in the hospital itself, TUTH established a Disaster Outreach Management Committee, staffed by senior doctors, to aid additional districts heavily affected by the quake. Outreach camps were established in the Gorkha, Rasuwa and Sindhupalchok districts, where treatment was available for minor injuries, and individuals with major injuries were given an initial diagnosis and referred to various hospitals. To prevent overcrowding, TUTH coordinated with the Nepal Youth Foundation (NYF) to send displaced patients to one of NYF’s Nutritional Rehabilitation Homes in Sunakothi.

Deepak notes that these remarkable efforts could not have happened without the support of many organisations, like the NYF, the International Organization for Migration, and Child Workers in Nepal, as well as Nepal’s Ministry of Health and Population. Equally important to the hospital’s ability to respond to the crisis was the vision of those committed during the hospital’s inception to ensure it was built on stable foundations. “I wrote an open letter of appreciation to the Japanese government,” Deepak says, “mentioning that the Teaching Hospital’s successes in this time of need was not only because of competence, but also because of the strength of our buildings. The Teaching Hospital has a great appreciation for the people and the Japanese government, who constructed such a vision 35 years ago.”

“The Teaching Hospital has a great appreciation for the people and the Government of Japan, who constructed a vision for the future 35 years ago.”

In turn, the Japanese government responded with an appreciation of what TUTH had managed to achieve during a time of great crisis. They asked Deepak how he would like to take the hospital forward, and this is where he saw a chance to seek improvements in the quality of the hospital’s equipment. They offered money, but he politely refused. “I requested they do the international tender in Japan, rather than going through the procurement department in Nepal, so we could get the best-quality equipment in the hospital.” As a result, US$7 million worth of equipment, including a new MRI scanner, was handed over to TUTH in April 2018. 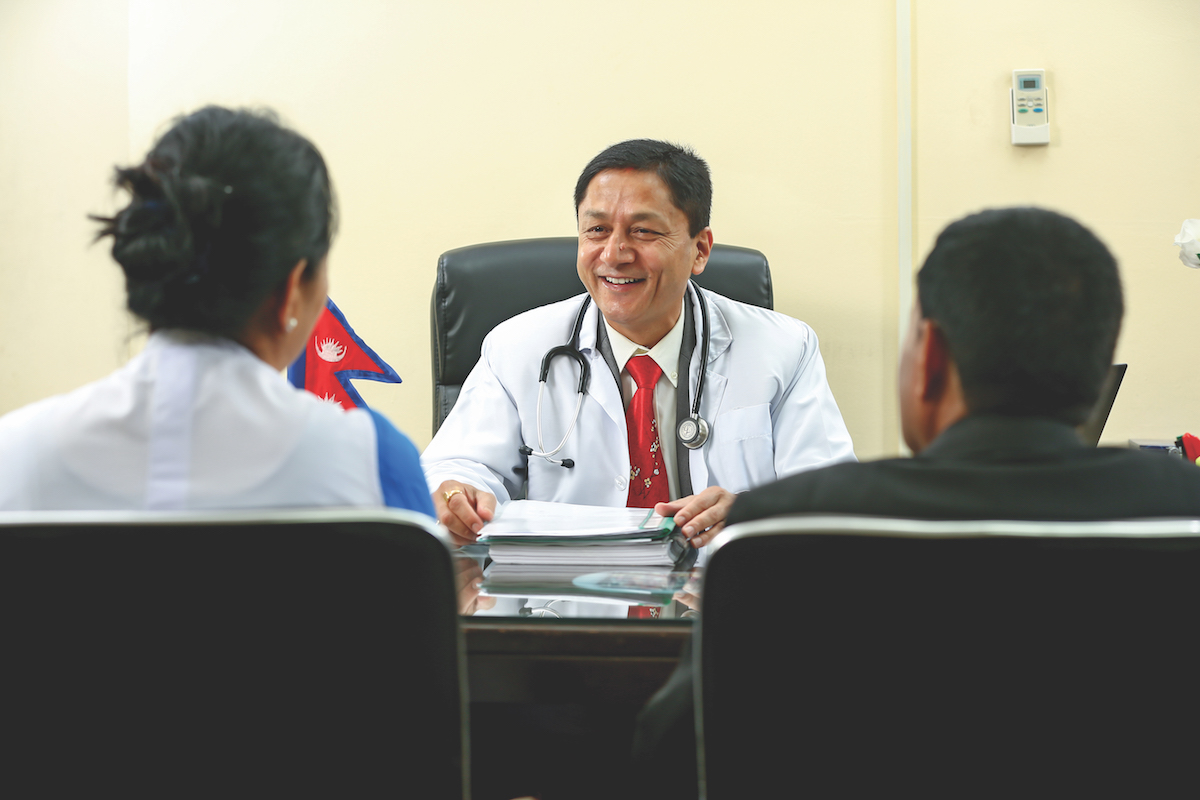 The hospital’s response to the quake was acknowledged by the international media. The president of the Association of Medical Doctors in Asia, Dr Shigeru Suganami, paid the hospital a visit, praising its management. A memorandum of understanding was established in July 2017 between the Association of Medical Doctors of Asia (AMDA) International Japan and TUTH for five years, designed to promote a Hospital Preparedness for Emergency faculty exchange.

While serving as executive director, Deepak oversaw several initiatives and projects that built on the hospital’s reputation for crisis response capability in the wake of the events of April and May 2015. An orthopaedic surgeon by training, he leaves the role excited about the hospital’s expansion and advancement of the newly set-up orthopedic department. Recently, a 75-bedded orthopedic ward, six-bedded high dependency ward and three modular operation theatres have been added.

There is a commitment to making healthcare solutions available to those who otherwise would be unable to afford them, with a focus on providing cochlear implants to patients with hearing difficulties. In Nepal, the devices are expensive, costing between US$10,000–12,000 per unit. Deepak fought for government subsidies to the tune of US$5,000 per unit, offered to four patients each year, and the hospital plans to provide 24 patients with the implant every year.

Another area in development is an additional organ transplant service. The hospital has been performing kidney transplants for seven years, and it has started to make arrangements for liver transplants this year. The budget is government-approved and a construction of Liver transplant ICU (LICU) designed with postoperative liver transplant recipients in mind has been completed and inaugurated by the Minister of Health and Population in July 2018.

The hospital has hired two surgeons specialising in liver transplants, while radiologists, anaesthesiologists and paramedics, trained in Australia and India, will soon be arriving. The necessary technical support for such a large undertaking is likely to be provided by the SingHealth group of Singaporean healthcare institutions, Austin Hospital in Melbourne, Australia, Apollo Hospital in Delhi, India, and the Singapore General Hospital in particular. Professor Tay Boon Keng, under whom Deepak trained in sports medicine in 1998, will be an important figure in helping the hospital get ready to carry out liver transplants. 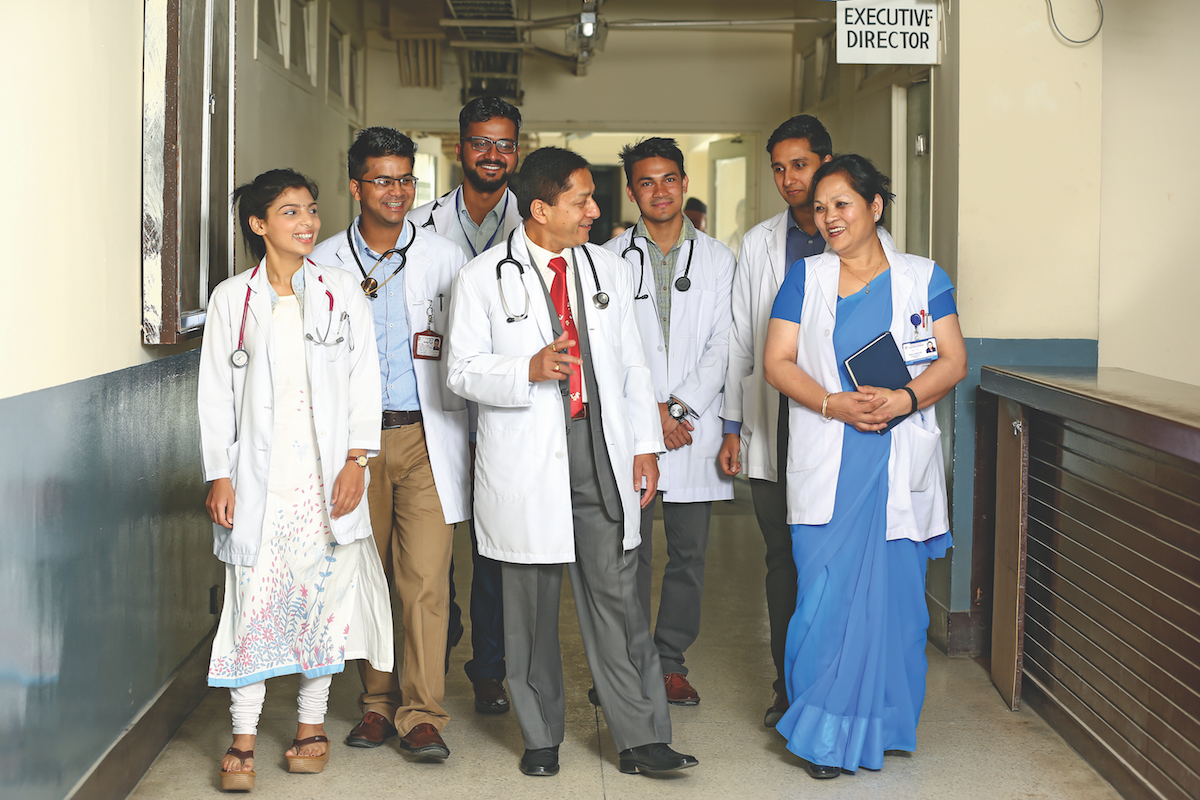 A victory that Deepak recorded during his term involved the overhaul of the hospital’s oxygen supply system. “Every hospital should have its own oxygen supply,” he says, but in 2016, TUTH obtained oxygen from cylinders sourced by an external supplier, at great expense and with poor efficiency. With the mechanisms in place to distribute the oxygen having fallen into disrepair, the safety of the patients was at risk due to oxygen concentration levels remaining stubbornly below optimum.

Deepak submitted a proposal to the America Nepal Medical Foundation for an oxygen concentration plant to supply oxygen to the hospital’s operating theatre, ICU, and postoperative ward. More than a year ago, supported by the Nepalese government, two oxygen plants 1,000 litre/min and 500 litre/min were set-up and are fully functional. And thanks to the America Nepal Medical Foundation (ANMF), another 500 litre/min oxygen plant is currently being installed, dedicated to operation theatres, ICUs and post operative ward. A gift from ANMF, it’s an appreciation for the swift aid offered to earthquake victims.

While these initiatives, and others like them, are worthy of celebration, Deepak leaves the job with the recognition that not everything about the hospital is as good as it ought to be. He was disheartened by one component of the hospital’s operations in particular: its waste disposal methods. After a small study, he found that 92% of the hospital’s waste was hazardous, when the standard is 15%. “This blew my mind,” he says.

“Municipal trucks were removing waste from the hospital and disposing of it at a dumping site, leaving it with public waste. We were making a very negative contribution to society and I knew we had to do something.” The hospital is now half-way through a two-year project to reform its waste management system, and there are plans to develop a Hospital Waste Management Training Center.

Deepak made a point of always seeking to learn from other hospitals in the area, guided by the principle that hospitals like TUTH are meant to ensure improvements in the quality of life of the people they treat. He is effusive in his praise for community hospitals in the Kathmandu Valley region, which are providing quality medical services to impoverished communities. “Community hospitals are continually improving,” he says, “and when they do good, the Teaching Hospital should learn from them.” Despite their smaller size, if they have good systems in place, the hospital would be serving its patients to learn from them.

“Hospitals in the area are continually improving, and the Teaching Hospital should learn from them.” 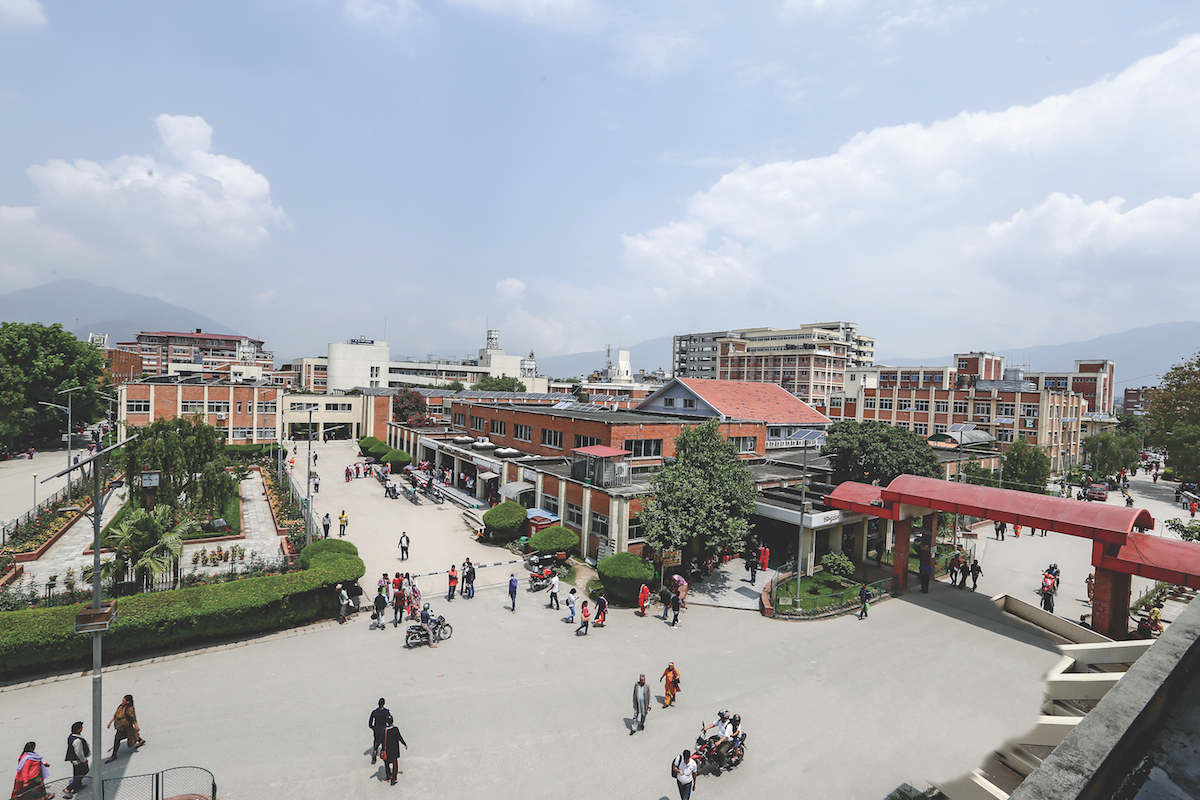 This devotion to the public good characterised Deepak’s relationship with the hospital’s partners, and he made sure to communicate this spirit when negotiating with potential suppliers. “I would approach companies asking them to reduce prices without compromising quality, sharing how those in need would benefit,” he says. “TUTH is a public hospital, so it’s everyone’s hospital. Its betterment is not the sole responsibility of the government and staff, but also the public’s. “If its standard of service improves, it benefits all citizens and reflects their contributions. You must run your organisation with a mission, vision, and united goal in mind.”

The fixed charity fund has reached US$100,000 thanks to the overwhelming donations for earthquakes victims from within the country and overseas. The funds will treat the poor, underprivileged and unidentified patients at TUTH, while some is carefully saved for future emergencies.

Deepak reminisces on his childhood in Doti, where people often could not access health facilities and other basic needs. He attributes his career to his late father, Ganga Prasad Mahara, who inspired him to become a doctor and compassionately serve communities like Doti.

Deepak established the Sagarmatha Health Foundation (SHF), a not-for-profit committed to the physical, mental and social wellbeing of the Nepalese people. In partnership with Health Care Nepal, USA, founded by Jack Starmer, SHF has been running free health camps, providing free medical services to thousands of Nepalese in remote places for the past 20 years. “It is people like my late father and Jack who continue to inspires me.” 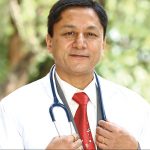