With its 103-year history, contract manufacturing company Royal Herkel strikes a fine balance between honouring the past and looking to its future. An adherence to traditional values certainly has a part to play in the company’s success, but these days it is as well known for its innovation, entrepreneurship and creativity as it is for its longevity. And CEO Harald Straatsma, a disciple of entrepreneurship, fits right in.

Preparing to enter the workforce after studying food technology and earning an MBA, Harald, against the trend among his student peers, decided to seek hands-on management experience, looking for work in companies whose feedback loops were short. He started his career as a management trainee at the infant food group Numico (bought by Danone in 2007), worked eight years at Abbott Laboratories, and later joined the healthcare company Fresenius, gaining experience in several positions over a 13-year period. “I moved from production to operation to strategic marketing, and so on, covering all the different disciplines in the company,” he tells The CEO Magazine.

Gaining experience at both a local and regional level, he eventually landed in a headquarter role, before becoming the general manager for the company’s affiliate in Indonesia.

Presented with the opportunity to come on board as Royal Herkel’s CEO, Harald, in making his decision, took into consideration three crucial aspects. “First and most important is that you have some affinity with the business and the products,” Harald says. Thanks to his experience at Fresenius, he had this in spades. Then, impressed with
the capabilities of Royal Herkel and the company’s potential, he asked himself: “Can I, with my background and experience, add value?” An answer in the affirmative led him to consider the last and most important thing: “the ability to be an entrepreneur”.

Satisfied that the company encouraged its staff to nurture this ability, Harald came on board and, since
the beginning of his tenure, he has celebrated the entrepreneurial opportunities Royal Herkel has to offer. “We have everything here under one roof,” he says.

“We may have an idea today, discuss it tomorrow, and implement it the day after. The entrepreneurial spirit that flourishes here is one I like very much.”

After his first year in charge, the company registered growth of 20 per cent. In this figure, Harald sees evidence of the benefits of long-term business relationships, as well as a motivating clarion call for the Royal Herkel team to continue to pursue this kind of success as a group. Harald’s varied experiences lend him a valuable perspective when it comes to understanding employee behaviour at every level: “I have worked from the shop floor up to the board of a company,” he says. “I know the different layers, and how they approach issues and problems, and how they function.” Most importantly, he knows the value of teamwork, and is adamant that “good teamwork always delivers the best results for the company”. 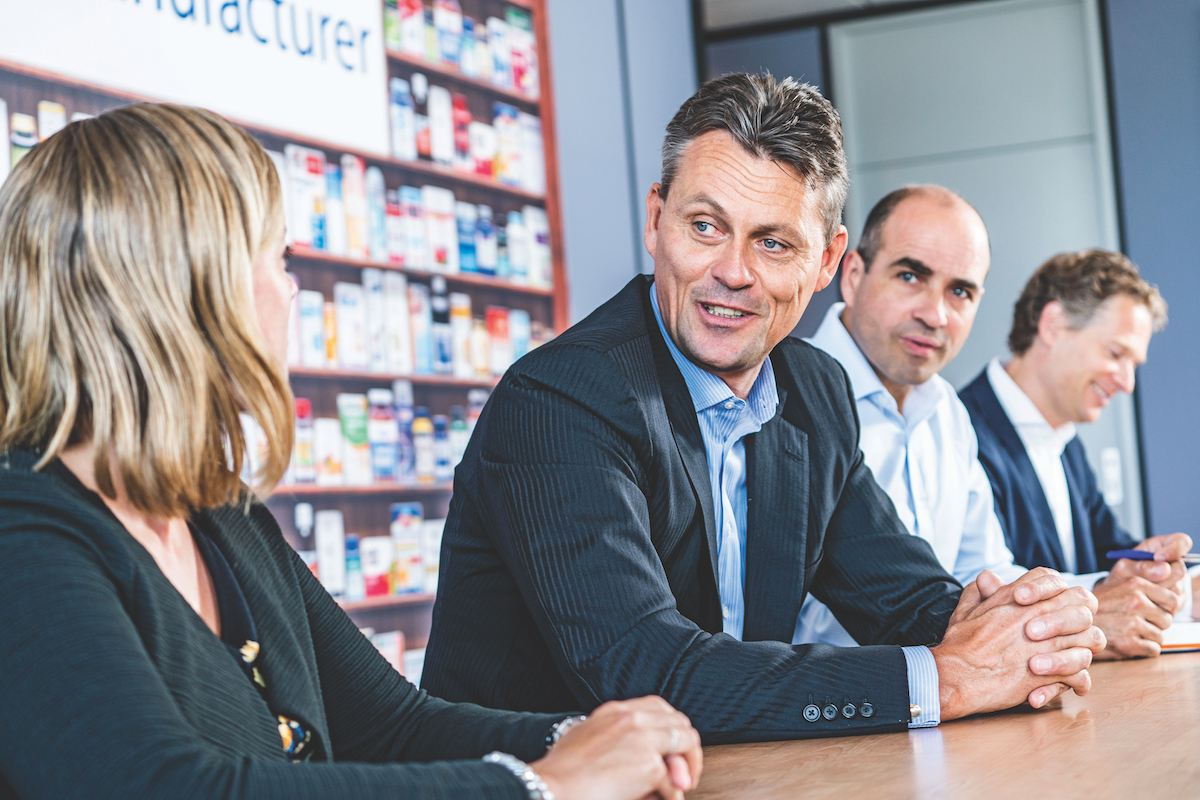 “Good teamwork always delivers the best results for the company.”

A commitment to moving forward as a team, always with an eye to entrepreneurial opportunities, sets Royal Herkel in good stead to stand apart from its competitors. And there are three significant ways in which it does so. First, Harald says, “we are a pure contract manufacturer: we don’t have home brands. This is very important for our customers, who have no reason to fear for the safety of their intellectual property.”

It also means that Royal Herkel is slightly smaller than its competitors who do produce their own brands, giving it an agility that the larger companies do not have. Second, Royal Herkel is a one-stop shop, where operations are streamlined. In one GMP-certified facility, where local regulations are observed, Royal Herkel can meet customers’ needs in terms of developing their products, implementing R&D processes to improve those products, and offering strategies for improving their market position.

The final differentiator Harald mentions is the talent Royal Herkel attracts. “We are a leading company in our industry,” he says. “People recognise that and seek to be part of a winning team.” The company’s recent growth provides its employees with the opportunity “to be entrepreneurial and to grow with the company. The people who cherish these things are the people we are looking for.”

He makes a distinction between those who are content working in a heavily prescribed role in a large organisation and those who seek freedom within their position, noting that Royal Herkel pursues the latter type, in line with its commitment to innovation. 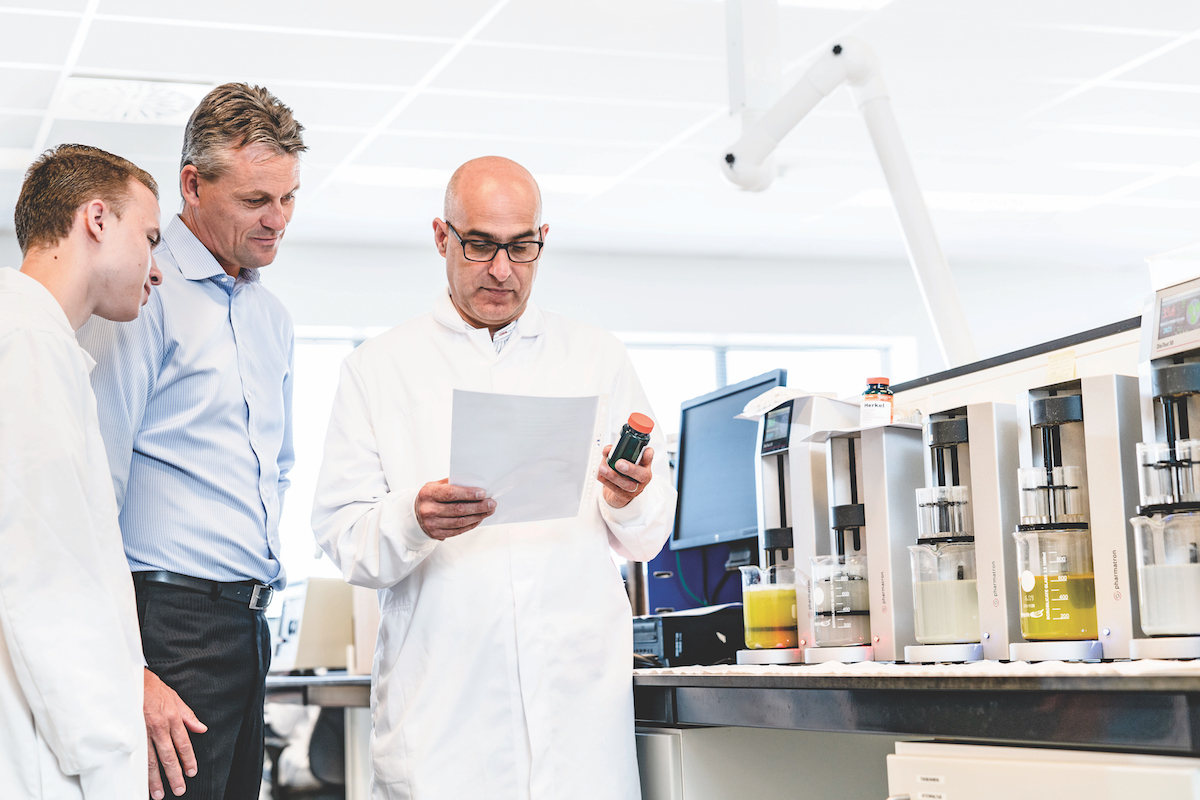 Another distinction Harald finds important is the crucial difference between a manager and a leader. Two things distinguish the latter from the former. “A good leader needs to first know where the company is heading, and where the industry is heading. However, this knowledge is worthless if a leader lacks the skills to communicate it, so a good leader “must be able to convey that message to the organisation in a way that people can understand.” Most importantly, Harald adds, “a good leader will motivate and encourage people to take that journey, and inspire them to contribute to it.”

A self-described hands-on leader, Harald nevertheless makes sure he gives his employees the freedom to manage their area of responsibility and be instrumental in its success. “I like to be entrepreneurial, so I give my people the same freedom,” he explains.

“I like to be entrepreneurial, so I give my people the same freedom.”

The desire, early in his career, to see results in a couple of days or within a week (that is, to work with a short feedback loop) evolved over time as Harald started to take on more senior roles. “You start to know what makes people tick, and how things are running, and you become more interested in doing things that take longer but will eventually have a bigger impact.” Harald’s commitment to pursuing long-term opportunities has been evident since he started with Royal Herkel. It is there to be seen in one of the earlier decisions he made: when he arrived, the company was working only the day shift; realising that there was capacity for production to run on a two-shift operation, Harald made the change. He also devoted early attention to readying the company to meet the challenges that an increased focus on compliance would present.

Under Harald’s leadership, Royal Herkel is devoting its efforts to increasing its future growth prospects and ensuring continued success. A more nuanced understanding of customer wants and needs is an objective, alongside a renewed focus on fostering efficient communication both within the company and with its suppliers and customers.

Seeking to consolidate Royal Herkel’s industry-leading position, Harald will soon be turning his focus to operational excellence, and to increasing both the number and quality of relationships with the company’s strategic partners, with a determination to make them enduring and mutually beneficial. When assessing potential partners, it is not a matter of “seeing who can make the best pill”, he says. “That’s a discussion which will take place anyway. More importantly, before we start that discussion, we need to see how we can add value, and how we can make the business better together.”

The challenge of “increased regulations, and an increased focus on compliance” also presents Royal Herkel with an opportunity. Due to Harald’s decision to focus energy on “increasing the necessary capacity and capabilities within the company to be ready to meet this challenge”, Royal Herkel will be prepared to take advantage of the new level playing field. “What is fantastic for Royal Herkel,” Harald notes, “is that the rules are becoming the same for everybody. In times past, many competitors would take shortcuts, which are now no longer possible.”

Finally, there is a goal in place to “modernise and personalise Royal Herkel to make the company ready for future growth”, as well as a longer-term project that involves seeing an initiative to foster cultural change within the company through to its completion. “We’re not there yet but we’ve made a good start,” Harald admits.

Having worked for three different companies, all within the field of medical nutrition, he says he has “developed a good understanding of the effect people can have on company culture”. He adds: “Although their products are essentially the same, there is an observable difference in the way they operate, their culture, and the ways in which they are successful.”

The recognition that there are different paths to success leaves Harald nicely positioned to forge a new one, driven by teamwork, with Royal Herkel.

Royal Herkel was established more than a century ago in 1915. The company ‘creates wellbeing’, and has made a name for itself for the reliable manufacture of high-quality nutritional supplements, medical devices, pharmaceutical products and cosmetics. It prides itself on its years of experience, technical product and market knowledge and expertise, placing it at the forefront of innovations and cutting-edge products. 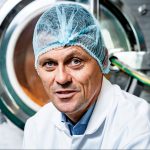