When was the last time you checked to see if the 100-sheet claim on a box of tissues was true? Probably never. “Who does that? You’d have to pull out the pieces one by one,” James Michael Lafferty exclaims. Perhaps we should start counting tissues, because according to James, it’s common practice in the industry to short-change consumers.

“I’ve noticed brands that would consistently pack 95 pieces in boxes labelled as having 100 sheets,” he reveals. “They’re doing it because they know no-one’s going to check them and they won’t get caught.”

Common as this may be, it’s not a practice in which James has taken part. “There’s a long history of doing the right thing in Fine Hygienic Holding (FHH), which is what attracted me to this job and this company.”

Since 2018, he has been CEO at the Dubai-based firm, after a long, diverse and illustrious career, including 24 years at Procter & Gamble, three years leading Coca-Cola in West Africa, and seven years leading the operations of British American Tobacco in the Philippines, besides teaching a leadership course at the University of the Philippines.

He’s a physiologist by training and is currently an Olympic coach for the Philippine Athletics Track and Field Association. “I have always tried to make ethical and moral choices, and let it be my guiding principle as CEO,” he continues. 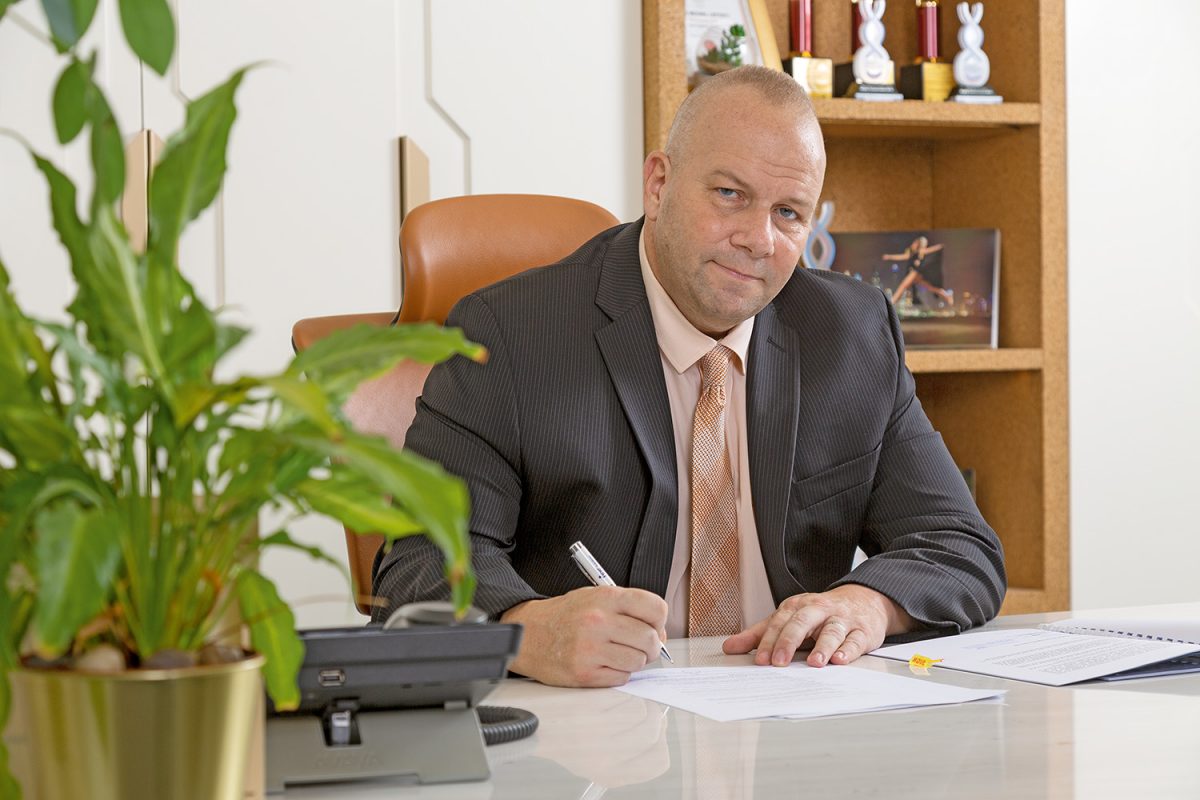 “As an ethical person, it’s impossible to be in a company that doesn’t value ethics. We should only do things that we will be proud of and wouldn’t mind going public with.”

James’s strong convictions have truly come to the fore this year, especially following the challenging situation surrounding global health and FHH’s subsequent rebranding. The firm is no longer just a paper products manufacturer and calls itself a wellness company. In line with this, it has repositioned and reformulated every product to provide a health benefit.

Its tissues have been sterilised with the patented SteriPro process to ensure they don’t carry germs; baby diapers have been reformulated to deliver moisturisers and promote skin health; and the company has worked with Swiss startup Livinguard to launch re-usable fabric masks, Fine Guard, containing a proprietary technology that has been shown in lab trials to be effective in killing viruses.

Women on the rise

“Get rid of underperforming men, replace them with superstar women, and your business will come back,” James says boldly. Under his leadership, FHH’s management board has been transformed, going from zero female representatives to 30% in just six months. “When I first walked in, the management board was 100% male and comprised of only two nationalities. If we claim to be a global company, we can’t hire only men from two countries where there’s a combined population of around 15 million people. How are we going to compete with those who are recruiting worldwide, from a talent pool of eight billion?” he questions. To rectify this, underperforming members of the board were fired – gently and with dignity, James is quick to add – and the job openings given to women after a radical recruitment exercise that was opened only to women. This was not a superficial act of positive discrimination that merely slapped a bandaid on a deeper issue. James estimates that 80% of the purchases in FHH’s product categories are made by women, so it makes sense to have input from female voices. “It’s not altruistic. It’s simply a good business practice and strategy,” he asserts. “We operate in a region of the world that is 10–20 years behind on gender equality, so by making FHH a place that women want to work at, I have a competitive advantage over everyone else, because I’m among the first in recruiting the best women in the Middle East.”

The launch of the masks in January this year was the result of quick thinking on the part of FHH’s management. “We were already working on it, but when COVID-19 started, we made the decision to accelerate the production. We started when nobody was selling masks, when the general consensus was that they were not necessary,” James describes.

When eventually, masks were found to be effective at preventing the spread of the disease and health advice changed throughout the world, FHH had the advantage of being early to the game. 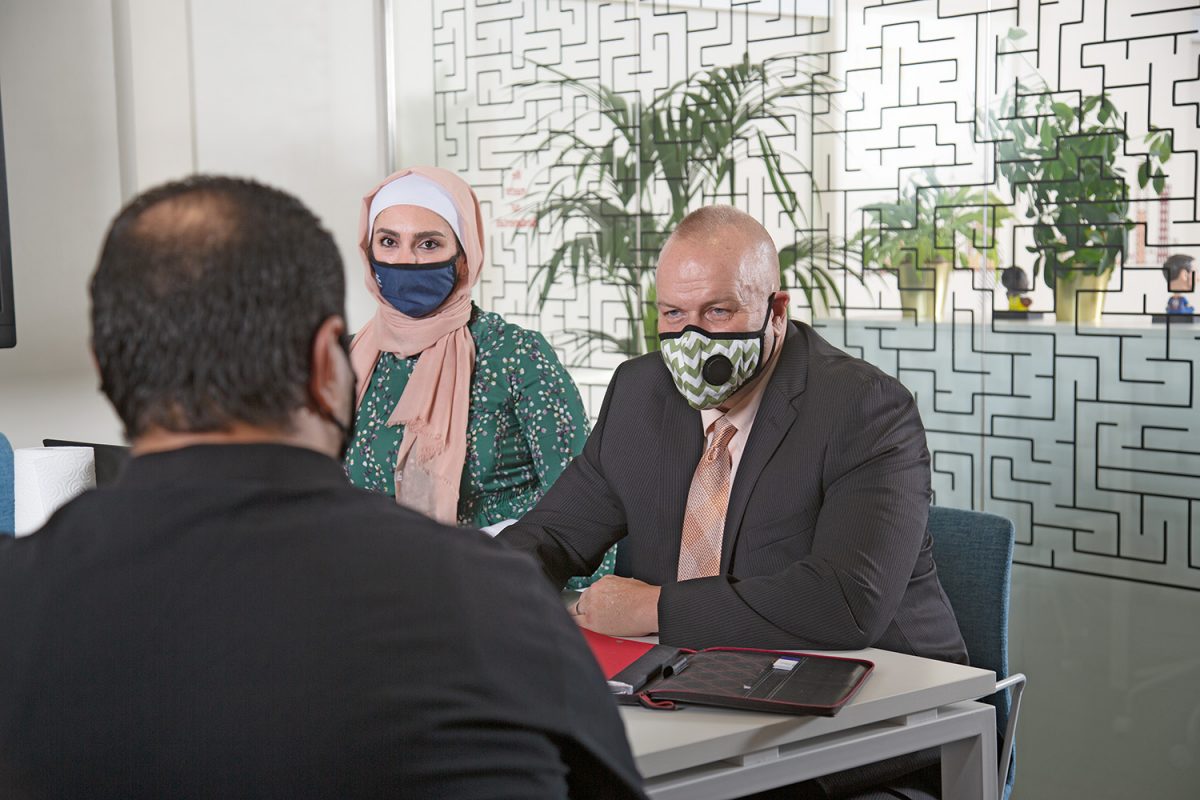 The firm was rewarded for its adaptability with a record first quarter, resulting in talks of its IPO on the London Stock Exchange, which had originally been scheduled for 2022–2023, being pushed forward.

Despite the financial potential presented by these developments, James is holding fast to his principles and setting boundaries for how far the company would go to leverage on it.

“The mask business is new and it became big overnight. I get 8–10 new proposals every day for joint ventures and cooperation. I am concerned that the masks will distract us from focusing on our core business – the tissue and diaper business,” he admits.

“It’s a human trait to take what we have for granted and to become enamoured with the new. It’s a real challenge to remain balanced and focused and not be distracted to the point where the core business could potentially suffer.”

The fact that the masks are made of fabric, which represents a divergence from FHH’s core paper business, was a deliberate decision on James’s part. “We are a paper company and it feels like the whole world has told me that if we were to make a disposable mask, they would buy it,” he confesses.

“But sometimes, you have to put principle ahead of profit. We will only sell re-usable masks, never disposable. Not on my shift.” According to James, the usage of disposable masks increased alarmingly by a hundredfold during the pandemic.

The mask business is new and it became big overnight. I get 8–10 new proposals every day for joint ventures and cooperation.

“The material used in disposable masks is a non-biodegradable, non-woven plastic,” he points out. “We are going to fill our oceans with used masks and gloves. We are going to destroy the planet with this and it’s irresponsible. To me, sustainability is about watching out for our planet and thinking about what our grandchildren are going to inherit.”

One of FHH’s most notable products is the Fine Duetto coreless toilet paper, which James claims is the only one of its kind in the region. “The brown cardboard core in the middle of a roll of toilet paper is made of a different type of paper that degrades slower, and goes in landfill. On top of that, it’s not cost-effective to ship, because we are shipping air in the middle of the roll and the consumer is paying for it.”

In the Duetto toilet paper, the cardboard core has been replaced by a mini travel-sized roll, which can be removed and conveniently carried in a bag. “Alone, it’s not saving the planet,” James admits.

“But billions of toilet paper cores get discarded every year and if we can even remove one more thing from what regularly goes into our garbage, oceans and landfills, we’re helping.”

James is aware that choosing to do the right thing may never be the most profitable or easiest journey, but he stands by his ethos, saying, “A good leader is someone who leads from a strong base of ethics, perseverance and understanding that things don’t come easy. The best leaders also have multi-dimensional lives and are not one-trick ponies. They have other passions in life that teach them new things and keep them fresh. I think that’s important, and that’s why I have tried to embody it.”