“I like to change the world.”: Johannis Willem van Vliet One mild October morning in Bensheim as The CEO Magazine speaks with acting Sanner Group (Sanner) CEO Johannis Willem van Vliet, the barometer hovers at 20°C. “I’m told we have the best climate in Germany,” he smiles.

The pretty chocolate-box town lies at the edge of the Odenwald mountain range on the Rhine plain. It’s a location that favours winemaking, especially the riesling for which the country is famous. On paper, wine and plastics for pharmaceutical packaging may have little in common, but it’s here in the region’s viticultural heritage where the first chapters in Sanner’s own history were written.

“As they started to experiment with wine in the region, the Sanner family realised there was a need for corks,” Johannis explains. Having spotted an opportunity, the family started a business importing cork by sea and rail from Portugal in 1894. “They were very successful.” But rather than rest on this success, other industries with a need for their product were soon identified.

“At the time, cork was also the closure used on pharmaceutical glass bottles, so the family entered this market as well,” he adds. By the mid-20th century, as Sanner approached 50 years in business, the pharma industry was moving towards a newer, more sterile material: plastic. As it shifted, so did Sanner.

“It was a very easy step into injection moulding,” Johannis says. For 15 years, between 1950 and 1965, the business produced both cork closures for wine and plastic closures for medicines.

“But it became increasingly obvious that there was a greater opportunity for profit and success in plastics for pharma than corks for wine bottles.” Today, Sanner manufactures more than 2.5 billion plastic parts every year, making it a leader in plastic packaging for medical and healthcare products.

Chances are that you have one of its innovations somewhere in your own home: more than 60 years ago, it pioneered the desiccant cap, a closure that has become industry standard for effervescent packaging for tablets such as vitamins.

These new solutions are also making us adjust and expand our own technologies.

“All the pharma companies are somehow linked to us.” Still wholly family owned, the company is now ready to make another game-changing pivot. “The Sanner family have said that it’s time for the next step into the future in the direction of medical devices,” Johannis tells.

While the destination is known, “the how and which kind of products and solutions are still to be decided”, he continues. Which is where Johannis, a Dutch-born engineer with a passion for automation, comes in. He says it was a perfect fit. “Sanner was looking for someone who had experience in R&D in medical devices.” 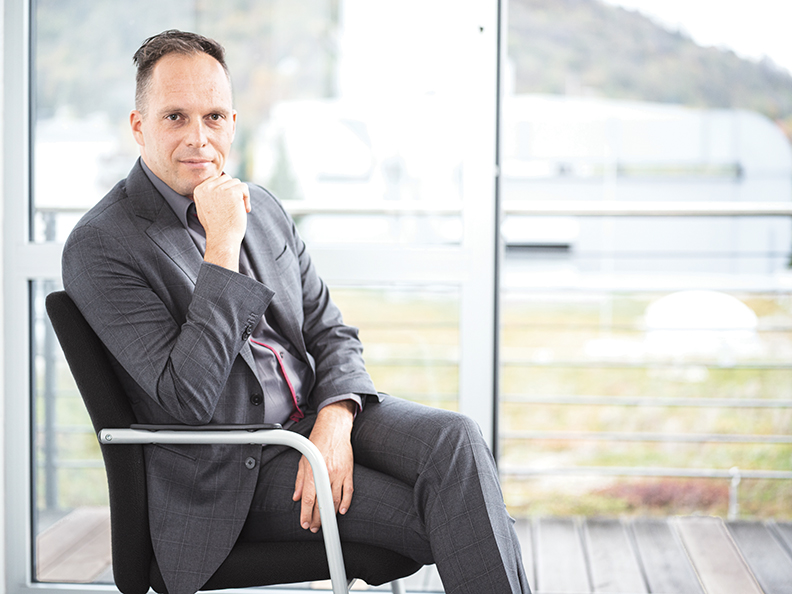 After completing a PhD in mechanical engineering, Johannis spent 17 years in Austria with medical device manufacturer Ottobock, including more than a decade as Executive Manager R&D. Looking for a new challenge, in August 2019 he was appointed Sanner CTO. As of the start of 2020, he is also acting CEO.

The first steps in this new direction have already been taken and while he can’t go into too much detail, Johannis reveals that “how patients are using medication” is one area of particular interest.

“Often, users incorrectly apply medication,” he shares. “Studies show that, currently, the successful intake of medication is below 50%, which places a huge cost on the social system, not to mention that people aren’t returning to health.”

COVID-19 has been both a “challenge and a chance” for Sanner, Johannis explains. “Since many people rely on our solutions to protect their health, business has grown even further than we anticipated this year,” he explains. Sanner has been producing special casings used in virus testing, a role that makes it “such a relevant company at the moment”. Fortunately, at the time of writing, the company hadn’t seen a single case of COVID-19 in its production sites in Germany, France, China and Hungary. “We’ve followed all the strict rules and I’m very proud of all our employees for having done so,” he says. “We are doing very well, but I worry about rising numbers. It’s also a significant physiological burden on our people. Therefore, keeping up the spirit and making sure everyone adheres to the rules is what is occupying much of my current focus.”

By using electronics and sensorics, Johannis hopes it will be possible to solve this problem by indicating correct usage of medication. “This is exactly the type of technology that fits in with my idea of how to shape the future of the company,” he says.

In its search for such “disruptive innovations”, as he calls them, the company is beginning to invest in startups active in the medical device arena.

“It’s a win–win situation,” he says. “The startup benefits from our expertise in design and manufacturing, our years of experience bringing products successfully to the market and our extensive customer network, while for us, it’s a source of innovative product solutions.”

The out-of-the-box thinking that characterises most startups also serves to test and develop Sanner’s existing capabilities. “These new solutions are also making us adjust and expand our own technologies,” Johannis continues.

Sustainable innovations within its existing portfolio is another of Johannis’s areas of focus. While there are challenges to finding alternatives to primary plastic packaging, due to the regulated nature of an industry where patient safety comes first, he explains the company is moving towards bioplastics. “These biomaterials are based on sugarcane and they are 100% recyclable,” he says. Decreased CO₂ emissions during production is another environmentally friendly characteristic of the material. This portfolio of bio-based packaging – called Sanner BioBase® – is now coming to market.

“We are hearing that our customers are interested because, understandably, plastics are a real topic,” he concedes. From here, Johannis hopes acceptance of recycled materials will follow.

“Currently only the secondary packaging is allowed to be produced from recycled materials, but we manufacture the primary packaging, which is always in contact with the medicine,” he explains. “This has to be 100% clean.”

Johannis believes that a key to achieving this lies in collaboration with its customers. “Together we can approach the regulatory bodies and demonstrate that this is the way to go,” he says. In the meantime, he says its current packaging is fully recyclable and, in Germany in particular, the company sees an “extremely high recycle rate of what we produce”.

A green streak runs through all aspects of the Sanner business, a reflection of the founders themselves. “The Sanner family has a very high focus on sustainability. In the past eight years, we’ve managed to reduce our carbon footprint by half,” Johannis says.

One of the ongoing challenges for Sanner is ensuring that elderly people can easily manipulate its primary packaging. “At the same time, we have to make sure that our packaging is child-resistant,” he shares. “Finding something that a grandmother can open but a four-year-old cannot is far from simple. Especially since the four-year-old has all the time in the world, is innovative, thinks out of the box, will play around with it, and finds ways that we think are impossible.” This is particularly relevant to the nascent medicinal cannabis market and the many forms it may take: flowers/ floss, tablets, chewing gum or gel capsules. “Perhaps even more than with regular medicines, there’s a need to make certain that children cannot have access to these drugs,” he says. One of the company’s packaging solutions that balances child security and ease of use for older generations is the TabTec CR, a tablet and capsule container using Sanner’s patented Press & Flip closure. “The cannabis market is new to us and will allow us to grow,” he adds. “We want to be one of the first to be able to offer suitable product solutions.”

Every detail is considered from this angle; as an example, his company car is hybrid. As the business looks towards new directions, Sanner is starting to plan a move to new, purpose-built facilities in Bensheim, having received approval from local authorities.

“Our new building will be an extremely green building, one of the greenest in the industry and in the region,” he states. “We were very much aligned with the local government regulations on new constructions.”

Respect – whether for its surroundings, the environment or its people – is at the core of a company culture that “is fed by the Sanner family”, Johannis says. “They very much want to develop the company, and not only from a technology or financial point of view but also from a people perspective,” he explains. The foundations are already solid: it’s not unusual to find employees who have been with the company for three or four decades. “I’ve been amazed by the loyalty I’ve seen here. It means that the company culture is very good and that people love working here.”

For Johannis, who also describes his leadership style as one based on “respect for all people”, the move to Sanner has been a meeting of like minds. “For any company to be successful, you have to base your work together around honesty and respect,” he says.

“Once you have established that, then each member within the group becomes important – it’s not just about the management team or certain stakeholders.” As an executive, he encourages company-wide collaboration.

“It is key that I don’t just communicate with my colleagues on the management team, but that I also talk to the people in production because that’s where I learn a lot of information – personal, product, and efficiency-related,” he says.

As he strives for continuous improvement and new ideas in the company, Johannis turns to all corners of the business for input to harness the high level of expertise of its people.

“We have organised some great workshops on product innovations involving many of the people who work on the production floor. Because they have knowledge and experience,” he insists. “It’s this team, and the ideas that we have together, that make us very successful.”

The CEO position is one that he is proud to fill. “I’m very happy that I’ve earned the trust to continue the Sanner success story,” he says. Equally, it’s a role that is also allowing him the freedom to follow his passions.

“It is personally important for me to be in health care, working in an industry that benefits a lot of people,” he enthuses. “I’m an engineer and I like to change the world.” 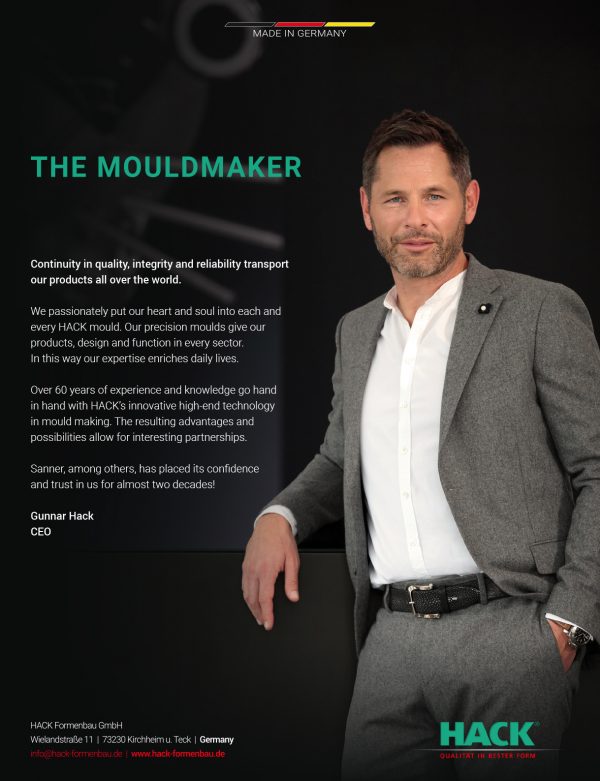