What do Australia’s first two prime ministers, Sir Edmund Barton and Alfred Deakin, and the first Australian-born Governor-General, Sir Isaac Isaacs, have in common? Not only were they pioneers in shaping the nation we know today, but all three were members of Australian Unity – one of the country’s oldest organisations. Established in response to unmet community needs in 1840, Australian Unity continues to identify and meet the health, financial and lifestyle needs of almost a million Australians – about a third of whom are members. A mutual company owned by its members rather than shareholders, Australian Unity reinvests all profits back into improving the customer experience.

Its areas of expertise include healthcare, insurance and financial services, as well as retirement and assisted living throughout Australia.

CEO of Independent and Assisted Living, Kevin McCoy first came across Australian Unity in 2005 when he received a call from Australian Unity Group Managing Director Rohan Mead. “We’re merging with Grand United and I understand that you are one of the best guys in Australia to manage these sorts of things,” Kevin recalls Rohan saying. “I led the merger and continued to work with the business in a consulting capacity for several years along with other clients such as Westpac and BT Investment Management until, one day in 2010, Rohan said they were looking at succession planning for their CFO and had decided that person was me.”

Over the next five years, Kevin diversified the business portfolio, lifted the bar in cash and capital management, and earned the respect and trust of the staff, taking over the role of CEO Independent and Assisted Living in July 2017. “We’re an organisation born out of community and, over the past six years, we’ve seen the trust equation shift in Australia and around the globe. Thanks to our efforts, people are now placing greater trust in mutual organisations rather than their traditional counterparts,” Kevin notes.

8.8 million
The number of people aged 65 and over in Australia is projected to more than double, reaching 8.8 million over the next 40 years.
Source: Australian Institute of Health and Welfare

It all comes back to culture

Since 2012, Australian Unity has grown from about 1,100 to 7,500 employees across Australia, mainly in Victoria, Queensland and New South Wales. “We’ve made a lot of changes recently, so our culture is transitioning to become more financially rigorous, accountable and, ultimately, more health care and customer focused,” says Kevin. “But when you grow, you get growing pains. You can only plan ahead so much, and you always have to embrace the unexpected.”

Kevin quickly realised that maintaining the same small-company culture wouldn’t be as easy as he had first thought. “We went from a company where 90% of people were in the same building, to a company where 90% of the people weren’t in the same building. I’m always striving to find people who fill skills gaps – they’re good at the things that I’m not good at. Essentially, we want to attract people who are passionate about helping and changing the lives of our customers,” Kevin explains. “You win on culture, and the best thing you can do as CEO is work towards getting the right culture. If you can achieve that, good things will follow.”

“The best thing you can do as CEO is work towards getting the right culture. If you can achieve that, good things will follow.”

When taking over the role of CEO, Kevin made it a priority to regularly visit the business’s aged care homes, retirement villages, and the homes of its home care and Indigenous clients. “I’m a pretty simple leader. I believe in walking the talk, leading by example and not saying anything I don’t plan to deliver on,” he explains. “Since July last year, I’ve met with more than 400 customers and visited 25 customers’ homes – I want to get to 100 homes by this time next year.”

Embracing the adage of ‘walking in someone else’s shoes’, Kevin went as far as checking himself into one of Australian Unity’s aged care homes. During his stay, he went through the admission experience, dined and mingled with fellow residents, and even slept in one of the rooms – all to identify how he could further enhance the customer experience. “I’m incredibly humbled and blessed to be able to represent these people. The ability we have to provide solutions for some of Australia’s greatest challenges is something that energises me every single day.”

But the road ahead is not one without bumps. Australia’s ageing population is a powerful demographic shift that presents a range of challenges and opportunities for older Australians, retirement organisations, and the wider community. “As a mutual organisation, we have to look at how we can increase our relevance and bridge into industries that need thought leadership and systemic change,” Kevin explains. “As we grow the business, we’ll continue to have more voice and greater representation for our customers so we can go in to bat for them and drive outcomes. It’s about living longer and living better.”

“As we grow the business, we’ll continue to have more power and greater representation for our customers so we can go to bat for them and drive outcomes.”

With an expected 50% increase in the number of Australians aged 70 years or over between 2014 and 2025, Kevin says that a shortfall of aged carers in the coming years is inevitable. If the workforce is to grow at the same rate as the ageing population, it needs to recruit and train an estimated 180,000 additional aged care workers by 2025, and 400,000 by 2040. “When residents arrive at our retirement villages, some may already need some form of assistance, which is very different from 10 years ago when they were genuinely coming in for retirement with a higher level of care required only much later.”

Kevin realises that this shift demands the provision of more comprehensive services and more staff skilled in being able to assist – putting pressure on both the industry and the workforce. “Consumer-directed care will play a huge role, and policymakers, organisations like us and our partners need to look at managing the ageing baby boomer population and what it’s going to take to fund their retirement. This will mean a consolidation across the sector, and we plan to be one of the most efficient operators to come out of that.”

“If I could give any advice to my younger self, I would say, ‘Go for it!’” says Kevin. “I grew up in a small coalmining town in rural Zimbabwe so when I came to the big smoke, I was awed by everything. Looking back, I was too cautious when I should have just gone for it.”

In a world of uberisation and casual workers, Kevin is striving towards an 85% permanent workforce at Australian Unity. “I don’t believe that temporary workers are in the best interests of our community. Our customers want trust and stability – they want to know that the person coming through the door is going to treat them with the personalised care they deserve,” he explains.

“Unlike some organisations, that are more skewed towards profits, we work towards solving problems. That’s why my job is so rewarding – because I have the opportunity to run a large-scale commercial business while still having a strong mandate to get out there and solve problems, by dealing with state governments, bureaucrats and anyone else who will listen.” 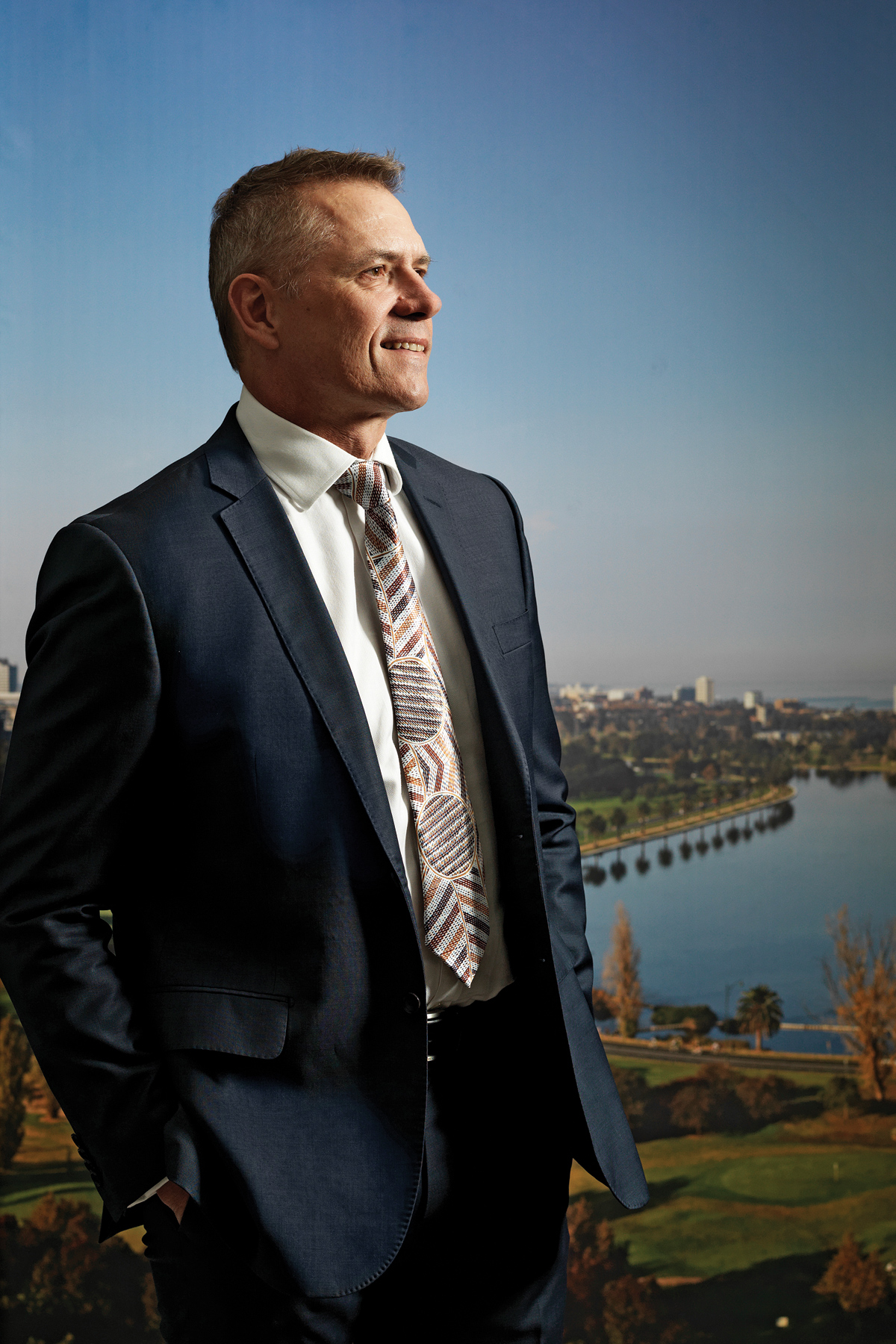 Kevin says new technologies are an essential tool in helping Australian Unity come out of this cultural and industrial shift in a leading position. “We’ve transitioned to a paperless roster system to increase convenience and allow for back-end analysis of inefficiencies. This new data system is helping us become more stable and efficient in delivering what our customers need,” he explains.

“With increasingly older residents, we need to enhance our ramps and mobility equipment and we’re also looking at fall prevention research and injury prediction. When something new comes across my desk, it must pass one simple test – if it’s going to improve the lives of our customers, the community they’re in, or our employees; then it’s worth my time.”

Every decision Kevin makes is geared towards turning Australian Unity into a great Australian healthcare company. He believes that in this consumer-driven world, if a company isn’t consumer-focused, it will inevitably fall behind.

“We have a strong voice in aged care and disability services, and it’s in our DNA to lobby for systemic change for our members and customers. I’m passionate about providing leadership in health care and lifting our industry reputation so we can attract more funding and more skilled employees.”

“It’s in our DNA to lobby for systemic change for our members.”

During his tenure, Kevin is also prioritising his work with Indigenous peoples. Australian Unity’s Aboriginal Home Care service provides culturally appropriate home and community services to Aboriginal and Torres Strait Islander peoples throughout New South Wales. The business currently works in metropolitan, regional and remote areas, with plans to expand into Victoria and Queensland in the coming years.

“I’m incredibly passionate about self-determination for First Nations peoples. During my tenure, I’ll work closely with this branch of the business and its team of 350 fully trained Aboriginal employees,” he explains. “I’m in the process of recruiting an Aboriginal general manager who will be responsible for growing the business over the next three to five years. We have a bold, sustainable vision for this business with self-determination playing a key part in Australian Unity’s success.”

The Australian Unity Wellbeing Index, formed in partnership with the Australian Centre on Quality of Life at Deakin University, is a comprehensive annual measure of personal and national wellbeing.

The 2017 Wellbeing Index found that millennials (aged 18–25) are the happiest generation of all, scoring 77.9 on a 100-point index measuring health, relationships and cost of living pressures. They were closely followed by older Australians – those aged 76 and over – who scored 77.6/100.

Researchers also discovered a general note of optimism about the future – with just 25% of Australians (1 in 4) expecting their financial situation to be worse in five years’ time. 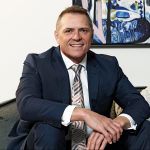