When InfuSystem CEO Rich DiIorio was just 15 years old, his father was diagnosed with kidney cancer and, within a few months, he sadly passed away. “I knew I wanted to make an impact somehow because I saw what my family went through,” Rich tells The CEO Magazine.

“There had to be a way that I could help patients and their families. At that age, I didn’t know what I was going to be, but I always knew I wanted to do something that would make a difference.”

That thought became a reality, as Rich began his career in the healthcare industry. He held positions in medical product companies including Stryker and Novartis, and in 2004 he joined InfuSystem. “It was a no-brainer for me to join the company,” Rich says. “I saw the way it could make a difference in patients’ lives.” Thirteen years later, Rich was appointed InfuSystem’s CEO.

Cancer patients are able to go home and lead their lives as opposed to staying in the hospital, and surgery patients are less reliant on opioid use as the pump will ease the pain they feel after surgery.

“The first few days after surgery are the most painful, whether it’s on the shoulder, knee or wrist. It’s during the first few days that the doctor is really trying to get patients over the pain and make them comfortable.”

But Rich highlights that it is also the time when most people start taking opioids. Traditionally, severe pain is treated with opioids such as morphine or codeine. When the anesthesia wears off after surgery – typically in the middle of the night – patients often “reach for the bottle of pills”.

“I knew I wanted to make an impact somehow because I saw what my family went through.”

But opioids can be highly addictive. In 2017, the US Department of Health and Human Services declared the opioid crisis a public health emergency. That year, 47,600 people had died from an opioid overdose while 2.1 million people had an opioid use disorder in 2016. CPNB is an alternative to using opioids for pain management. At the end of the surgical procedure, patients are hooked to the pump via a catheter. The catheter numbs a nerve bundle with an anesthetic, decreasing the sensation of pain.

Once patients get over the initial pain, they can manage the rest of it with acetaminophen (Tylenol) or ibuprofen (Advil). “You never really have to reach for that bottle of pills because you never feel the pain during the worst possible time,” Rich says.

“It’s been proven in studies that with CPNB, there’s a 60% reduction in opioid use. If we can make an impact like that on the opioid epidemic, that’s an amazing thing to be a part of.”

Having worked in the business for the past 15 years, Rich has seen patient satisfaction scores go “off the charts”. He recalls a specific case where he had to train a 15-year-old cancer patient and her mother on how to use the infusion device. “As a sales rep at the time, I didn’t realize the impact until I was done with the training,” he says.

“The mom stood up, walked over, gave me a hug and thanked me for giving them their lives back. At the time, I didn’t know what she meant and when I asked her, she said, ‘My daughter’s been here for three months and I haven’t left the hospital. She gets to go back to school, and my husband, my daughter and I get to go home now and eat dinner as a family. That was 14 years ago and I still think about it every day. If we can do that for patients, that changes the world. That’s what’s so good to be a part of.”

Rich says that when he wakes up in the morning, he can’t wait to go to work because of the team at InfuSystem. He says having a great team of people makes his job much easier. But, at the end of the day, his top priority is the patient. “The patient is everything to us as a company. And it drives the culture. It allows us to make better long-term decisions as a business.”

He adds: “The patients are going through a really tough time in their lives – whether they’re young or old it really doesn’t matter. For us to give them just a bit of normalcy back; to get out of the hospital, to go home, to be with their family and friends. If we can give them that little sliver back, then we’ve accomplished our goals and so much more.” 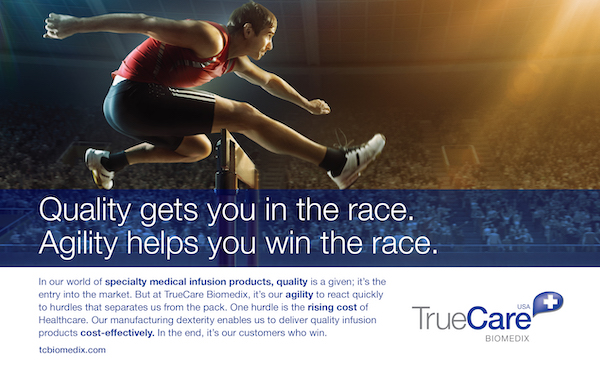