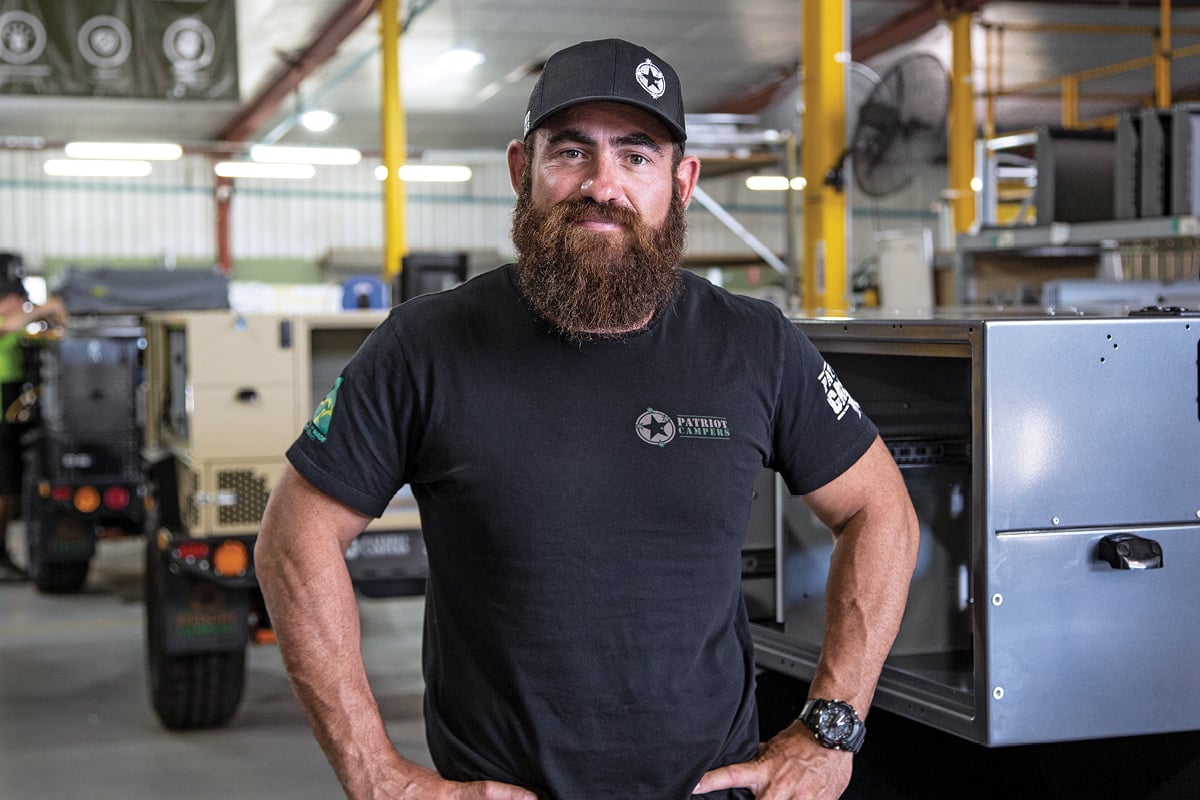 The most extraordinary thing about Justin Montesalvo is that he’s really rather ordinary. Forget that his award-winning camper trailers and Supertourers have revolutionised a global industry, or that he and his family star in a television series exploring ridiculously inaccessible terrains. The Managing Director of Patriot Campers is just a simple Aussie bloke who enjoys a beer and chewing the fat with mates around a campfire.

In fact, it was that exact scenario that changed his life six years ago. Justin was on his usual off-road camping trip to Queensland’s Stradbroke Island with family and mates, when the ‘rather expensive’ trailer hauling the gear got bogged on the beach.

“I thought I could design something much better, so sitting around the campfire that night we imagined the perfect camper trailer. I picked up a stick and started sketching some designs in the sand.”

A sheet-metal worker by trade and a third-generation manufacturer, Justin had already established his business, Express Metal Products, for it to purr along nicely while he locked himself in his office and got creative.

“For six weeks, around 20 hours a day, I was surrounded by samples of parts, stoves, fridges and drawer slides. I was so excited, nothing else mattered.”

His wife Sarah knew not to interrupt, except when called upon for essential design advice on family necessities such as storage capacity and bench space.

Nine months later, the prototype built, Justin, Sarah, twins Christian and Ashton and younger sister Mia loaded up and headed back to Stradbroke Island for a test run. The stubby little green trailer, sporting its independent suspension, 33-inch mud tyres, stainless steel kitchen and integrated quick-pitch tent, had barely been driven off the barge before it drew a curious crowd.

“It was immediate. Everywhere we went everyone wanted to know what it was. I had no intention of marketing it; there was no name on it, no decal, nothing. I just wanted to build something for our family trips.”

“I had no intention of marketing it … I just wanted to build something for our family trips.”

The X1 was born, Patriot Campers was launched, and production began in a rented factory next door to Express Metal. In 2014, assembly was relocated to a 700m2 plant in Molendinar on the Gold Coast. 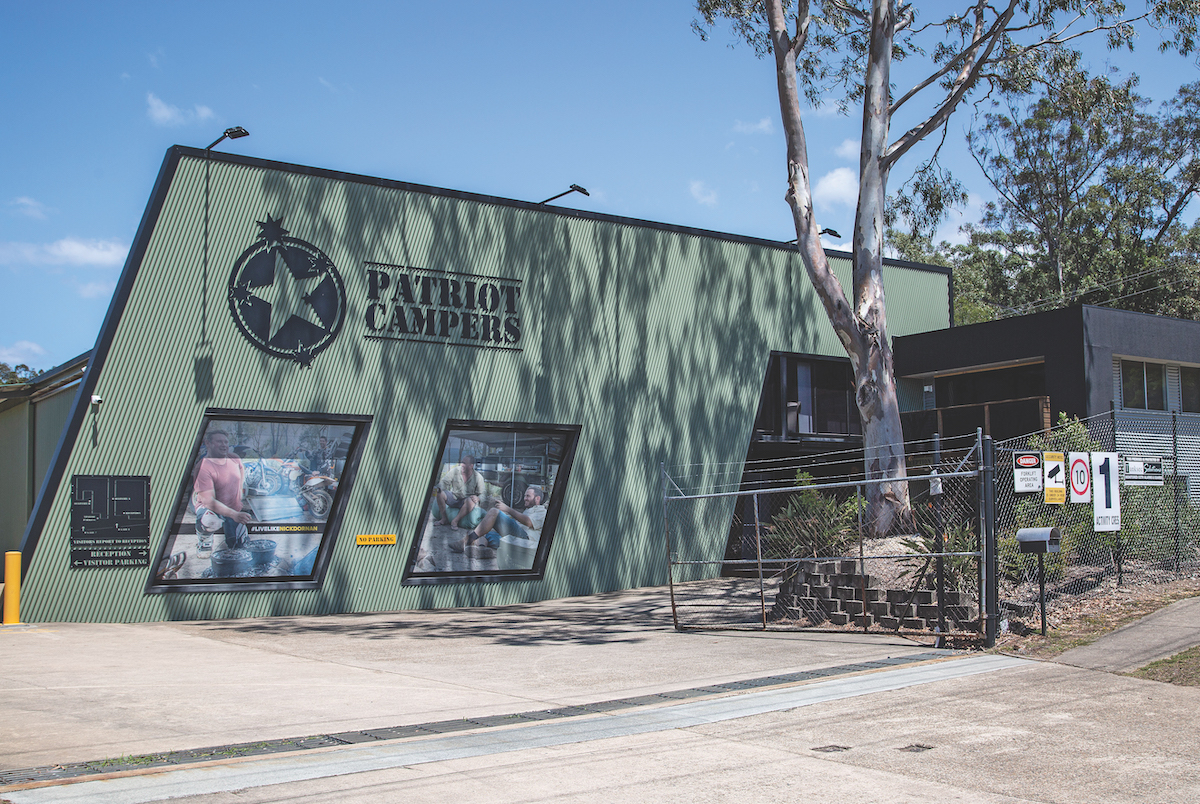 “That was another product born of necessity. I was in the Kimberly pulling the Patriot X1 while another flat back trailer was carrying our Polaris RZR. I asked, ‘why couldn’t we make an X1 with a big, flat deck so we could haul all the dirt bikes, kegs, or whatever, around on it?’”

It wasn’t long before necessity dictated the need for Patriot Campers Off Road (PCOR), a range of unstoppable Supertourers purpose-built from Land Cruisers.

Last year, PCOR teamed up with RAM Trucks Australia to produce the SUPERRAM. Built from the American pick-up RAM 2500 Laramie, the SUPERRAM boasts every conceivable in-cabin luxury, seating for six and towing capacity for 6.7 tonnes.

All Patriot Camper products are manufactured in Australia and exported around the world with distributors in the US and in Mongolia, where a showroom was opened in August.

Reliant on quality partners, including Redarc, Cruisemaster and TJM, Justin is ruthless when it comes to road testing his products. Only the harshest, rockiest and steepest extremes will satisfy Justin’s determination that his trailers and Supertourers are up to the job.

From the rugged Moab landscape in Utah to the Gobi Desert in Mongolia, the family is always together, and it was the family camping concept that triggered the launch of television reality series Patriot Games.

The first two seasons aired on Channel 9 and the third season was released on YouTube, and features their recent trip to Mongolia.

“My brothers Bobby and Casey are also heavily involved in the show, and Dad comes along sometimes. I wanted viewers to see the reality of what happens when a family goes off-road. Sarah and the kids go everywhere and are very involved in all aspects of the business. The twins work on the production line during school holidays, clocking on and off like everyone else, while Mia, our action woman, is often in the office with Mum sorting out the merchandise.”

You get the feeling that no matter how ‘satisfied’ Justin is, he’ll always be seeking something better. While he admits he hasn’t yet built his all-time camper, it’s definitely in the pipeline.

“No, I won’t tell you about it, that one’s for me,” he laughs. “But when it finally happens, the whole world will know about it.” 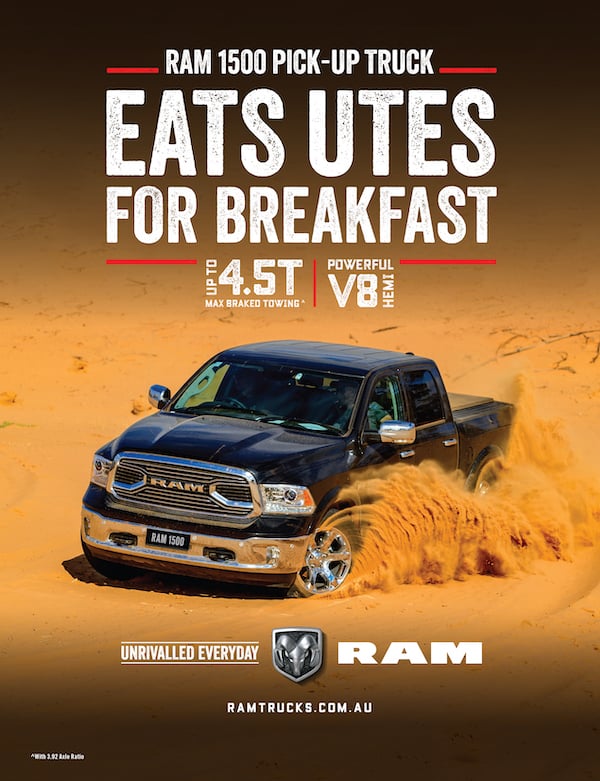