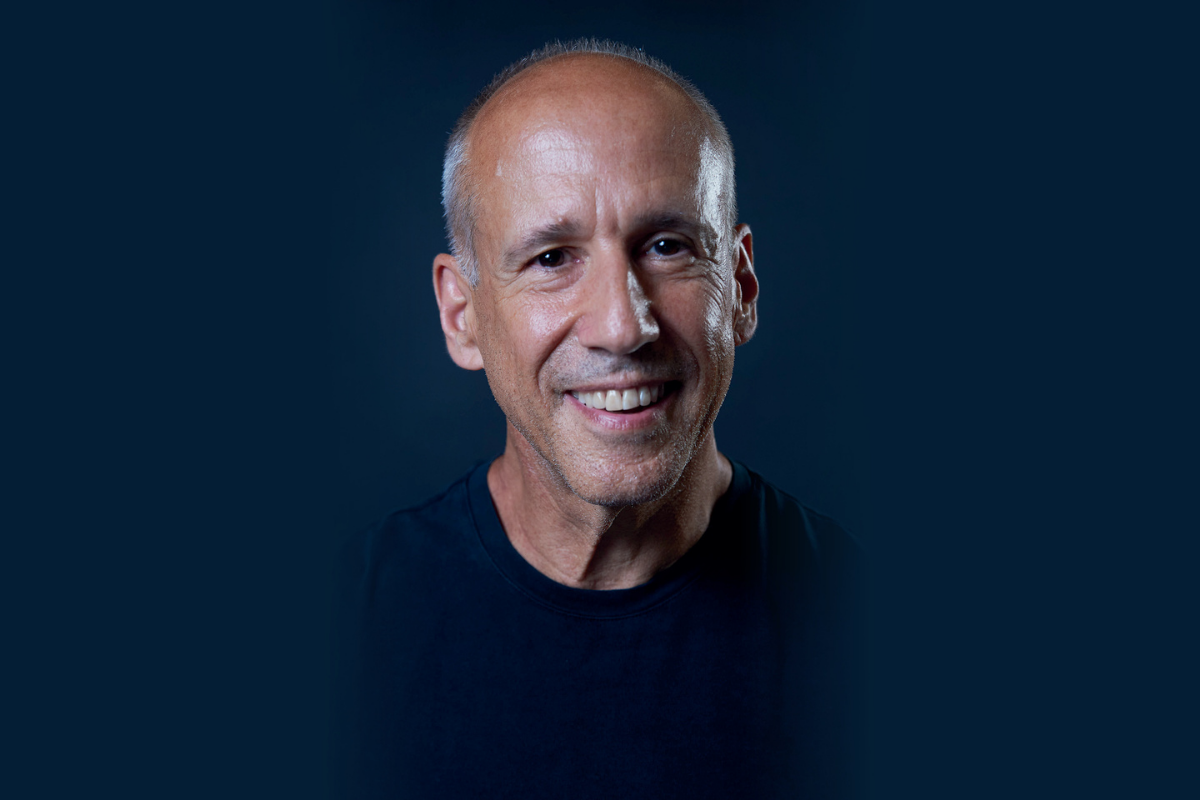 Sometimes, Peter Ryder just has to pinch himself. Like the time when he was overlooking the pool from his villa nestled in the opulent Four Seasons Resort The Nam Hai. Sprawled over 30 hectares of stunning, unspoiled beachfront along the shores of Vietnam’s Hoi An Beach, The Nam Hai is just one of the iconic developments built by Indochina Capital.

This one is a particular favourite for its CEO, which is unsurprising given that as recently as last year, it was voted by the TTG Travel Awards 2019 as the Best Beach Resort Worldwide.

It’s just another gong to add to the collection since it opened in 2006, and was shortly thereafter named the world’s Best Designed Resort by Travel + Leisure (2008).

“I was sitting looking over the swimming pool, out at the ocean and I thought, ‘Oh my God, did this really happen?’” Peter reflects, “Seizing the opportunity to create something spectacular along one of the world’s most stunning coastlines, nearly a kilometre of beach, with nothing else around it, just absolute beauty.”

After a decade in the field as an archaeologist and anthropologist, both as a graduate student and a teacher, Peter was the head of the Asia–Pacific real estate finance group for Salomon Brothers, spending 1983 to 1991 in Tokyo and New York.

In December 1991, sitting in his office in New York, a fax arrived highlighting a potential development site in Ho Chi Minh City with an arrow pointing to the question, “Would you be interested in this site?”

The New Yorker set off to explore the option and within a couple of days felt a strong connection with Vietnam, his anthropological background triggering his senses, his business brain recognising potential.

He began working across domestic real estate, financial services and the country’s neophyte capital markets. In 1999, he engineered a merger with fellow entrepreneur Rick MaySmith to launch Indochina Capital, combining investments and developments in Hanoi and Ho Chi Minh City, working together before Rick retired six years ago.

“Fundamentally, though, what really attracted me to Vietnam right away was the people,” Peter says. “They have a deep sense of cultural identity and true family values, in that family is very much at the centre of every Vietnamese universe, the intelligence, the creativity. On top of that, physically, it’s an incredibly beautiful country.”

It’s that culture Peter is infusing into Wink Hotels, a brand inspired by Netherlands-based hotel chain citizenM. Wink is a joint venture with Kajima Corporation, one of Japan’s largest, most prestigious contractors and developers, and is operated by Indochina Vanguard, a partnership between Indochina Capital, Kajima and Vanguard Hotels.

There are also ‘neighbourhood hangouts’, community spaces offering flexible seating with a co-working space component. “Vietnam hospitality needs something like Wink, as opposed to yet another established brand,” Peter says. 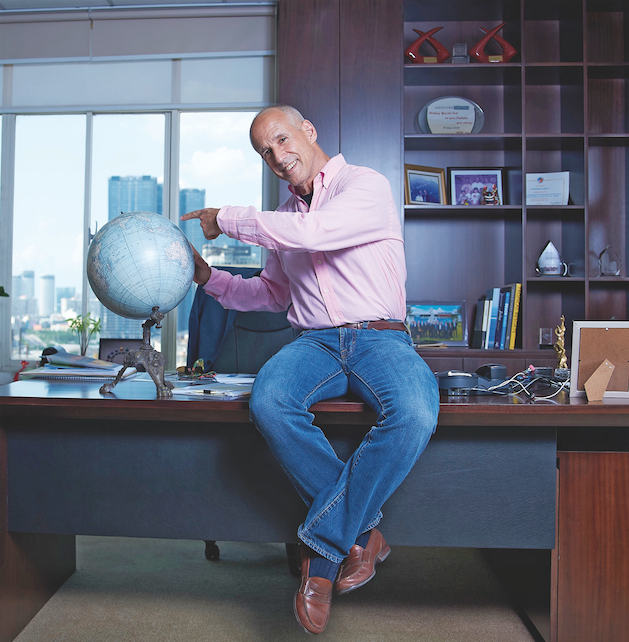 “The rooms are compact by hotel standards. And Wink will have to compete with the established brands, but our main catchment pool are the mini and independent hotels, which represent 77% of hotel room inventory in Vietnam.”

The opening of the first Wink Hotel, Wink Hotel Saigon Center boasting 237 rooms in the heart of Ho Chi Minh’s District 1, is scheduled for March 2021. The ceremony for the topping out of the hotel was in November last year, at the same time the brand’s presence in Central Vietnam was celebrated with a groundbreaking ceremony for Wink Hotel Danang Centre, located in the heart of Danang along one of the city’s busiest streets, Tran Phu.

Despite delays brought on by the pandemic, there are more than 20 locations in the pipeline for Wink Hotels, including multiple properties in Hanoi and Ho Chi Minh City, as well as secondary markets across the country, with 12 expected to be rolled out over the next four years.

“It’s always been our game plan to target the domestic market,” Peter says. “Vietnam has evolved into a middle-class economy and society over the last decade, and travel has become a very, very important component of people’s lives. And as COVID-19 has been tamed here, domestic travel is approaching pre-pandemic heights. There is more potential for domestic travel now than there was before COVID-19 because people aren’t going to Bangkok, Phuket, Bali, Tokyo or Shanghai. They’re staying domestic, travelling to Da Nang, Haiphong, Can Tho, Ha Long or Phu Quoc, particularly on the weekends. The domestic travel figures are extremely strong and a lot of the resorts and other hospitality or food and beverage venues catering to the local market are doing quite well. Of course, Wink will also benefit from foreign tourists and business travellers when they return, but we’re confident we’ll attract the locals in the meantime.”

I can be incredibly hands-on and detail-oriented.

Another successful strategy has been to build and develop from scratch rather than renovating older properties. Peter admits that while land is getting more expensive to acquire throughout Vietnam, there’s still plenty of it around if you look carefully enough with a trained eye.

“Everything we’ve done to date has started with a piece of dirt, what we call a greenfield development,” he explains. “When people ask why we just don’t renovate older buildings in great locations into a Wink hotel, for example, we have to put it into perspective as what we do starts with extraordinary design.

“Somebody says, ‘Oh, look, here’s an old Crowne Plaza, or here’s an old Marriott Hotel, why don’t you come in and renovate it?’ But they’ve got rooms up to 35 metres and when you start to think about what it would take to chop things up, how to completely rewire, re-plumb the whole thing, we have much more freedom starting with a blank slate. It’s literally, in most cases, more expensive for us to renovate if we really want to implement our architectural experiential vision.”

Peter married the love of his life, Thuy, 26 years ago after working with her developing the landmark World Bank Headquarters in Hanoi. The couple continued working together for several years after their marriage until they realised their “strong individual personalities” were more conducive to serving “separate professional interests”. 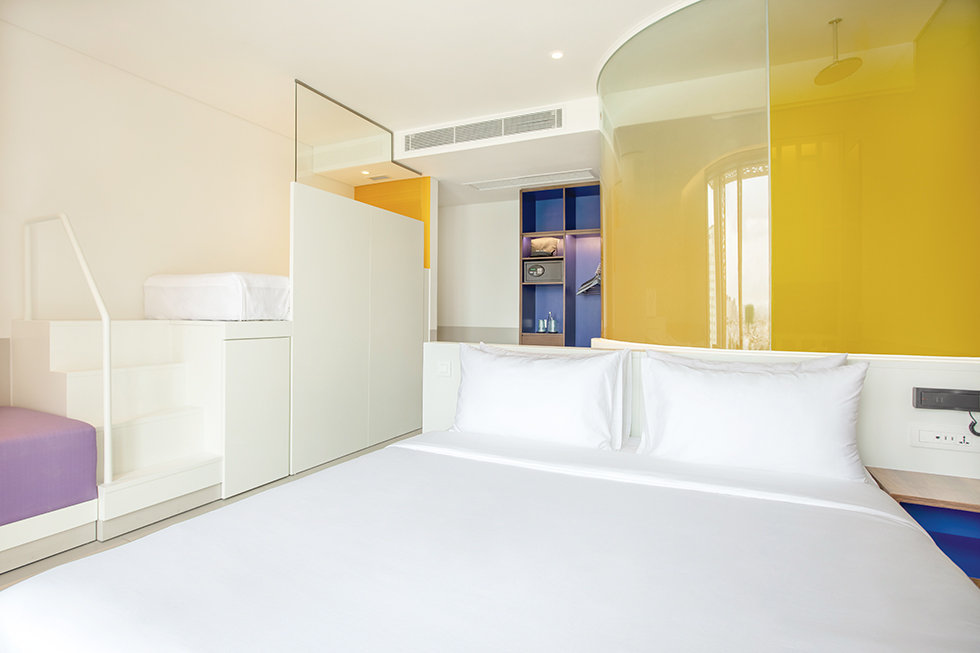 “We have managed to build a great life together without being in each other’s hair all the time,” he laughs. “She’s extremely talented with great design instincts and has been phenomenally successful as an entrepreneur, as an investor.”

Peter also describes Thuy as a wonderful wife and mother to their 26-year-old twins, Luke and Max. After completing degrees at universities in the US, the pair returned home and spent time working with their dad before chasing their own careers.

While Max just began the two-year MBA program at Harvard Business school, Luke is considering the MIT real estate graduate program starting in 2021. He views his sons as very motivated and expects that one day, despite pursuing their own paths at the moment, they’ll be involved in the company.

“Look at me,” he laughs. “I’ve never been to business school, I’ve never studied economics, finance nor real estate. I’m an archaeologist by background. We all get there in different ways.” 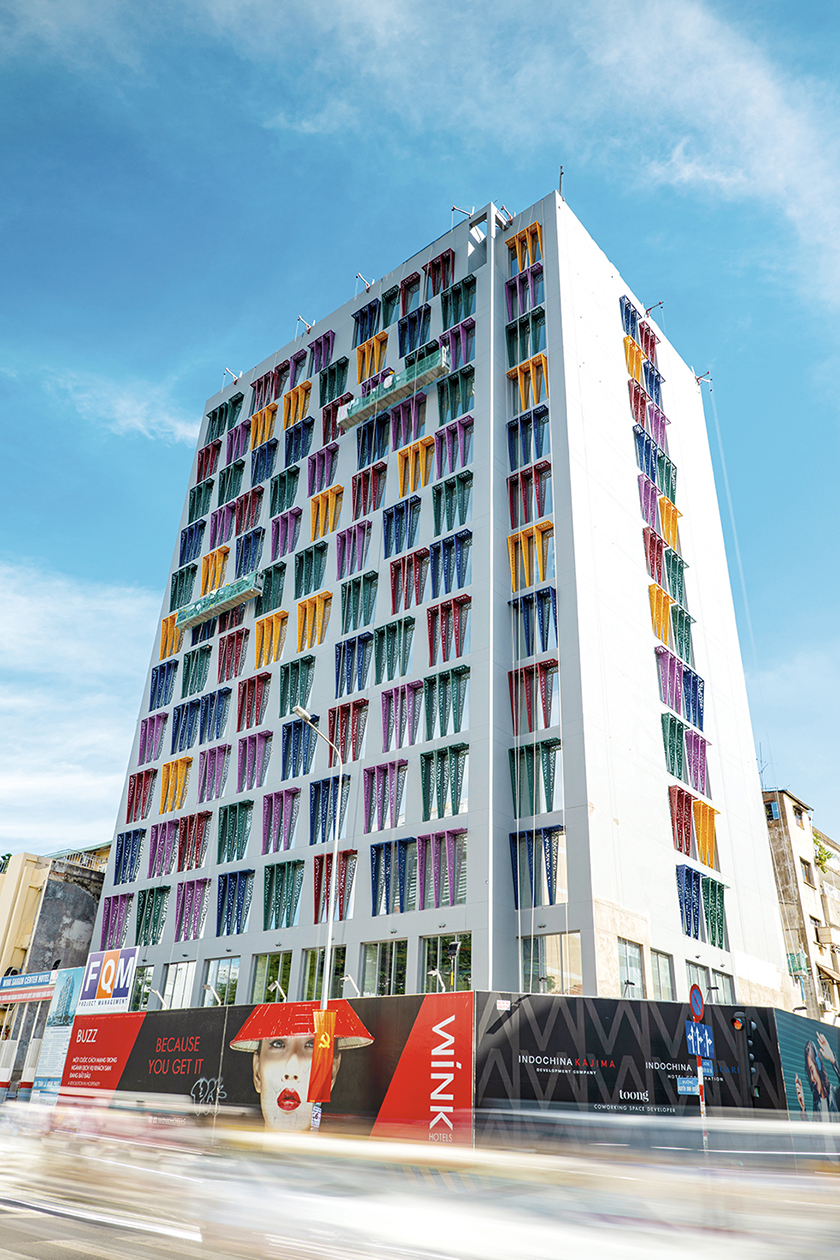 Partnerships outside of family are also important to Peter. Apart from the alliances formed with Kajima and AW2, the architects behind The Nam Hai, Six Senses Resort Con Dao and Wink, Peter values Indochina’s relationship with Hoa Binh Corporation, Kajima Corporation’s construction partner via a joint venture known as Kajima Vietnam, the main contractor for at least two Wink hotels.

“What they have in common with us is a commitment to creating value by thinking differently. It is a pleasure working with Hoa Binh, one of the most reputable contractors in Vietnam.”

Looking back over the year, Peter reflects that the lockdowns and restrictions triggered by COVID-19 actually presented a rare and valuable opportunity to slow down and gain perspective.

He headed to the hills, literally, in the west of Hanoi, where Thuy had accumulated about 12 hectares abutting a large state forest on which she built an “incredible” home. Peter spent his time hiking and reflecting on his company and the people he leads. “It definitely gave me more perspective on life in general,” he says.

“I realised how very, very fortunate I was to just be where I was and to have what I have, to have built this company and gathered a group of people who are now a community. I saw that more clearly, more deeply and it made me even more committed to ensure what I’ve put together stays together.

“I also watched all 86 episodes of The Sopranos. I absolutely loved it. In fact, I was over the moon with how much I loved it. And I finally read the Penguin Classics edition of War and Peace, all 1,444 pages of fine print, which I’ve started before, but never persevered with.”

You glean a better understanding of how typical it would be for Peter to persist with the more exhaustive translation of War and Peace when he explains his approach to work and leadership. Although he admits he fluctuates from being “microscopically” involved to stepping right back. “I can be incredibly hands-on and detail-oriented,” he says.

“One day, I could be talking about exactly what the decorative screen in the Wink hotel should look like, what material it should be made out of or what colour it should be painted. The next, I could step right back to philosophically guide the company, making sure our values are being promoted and the big picture endeavours are being undertaken. So, it’s very unpredictable. But I’m a Gemini. So, there’s always at least four of me in the same room.”

Having spent the past two decades creating iconic landmarks and reshaping landscapes throughout Vietnam to offer unrivalled experiences and a change in lifestyle, Peter looks to the future with optimism. While his focus at the moment is very much centred on the launch of Wink hotels, he’s also conscious of the need for an overall strategy and succession plan.

“I love Indochina Capital,” he reflects. “I enjoy the work environment and am as much a friend as I am a boss. I could count on one hand the times that I’ve really had to dress anybody down. I just make sure that we click together.

“I’ve discussed succession with the Board and we’ve outlined a 10-year plan. I see myself being very active as a full-time CEO for the next four years, then I’ll start to step down, maybe working half the time and taking on an Executive Chairman role. Then, after a couple of years of that, I’ll probably just attend quarterly board meetings, share my wisdom, and make some noise every now and then.” 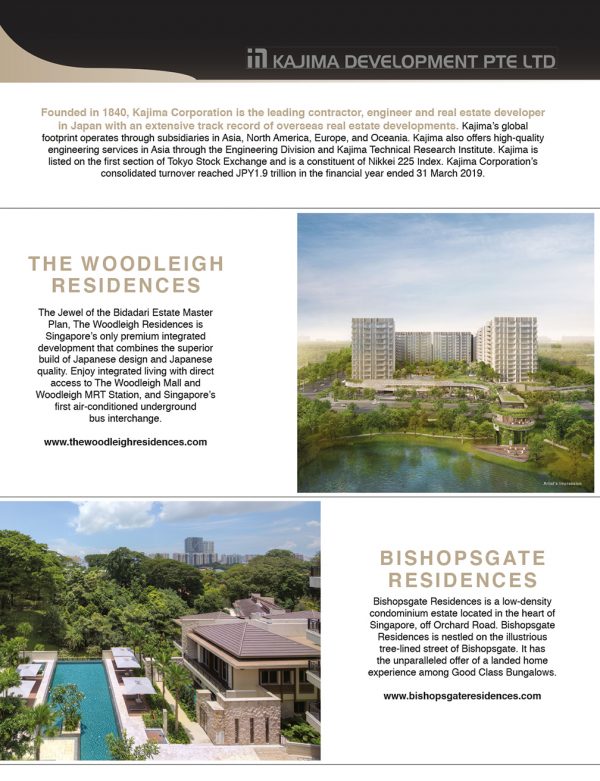 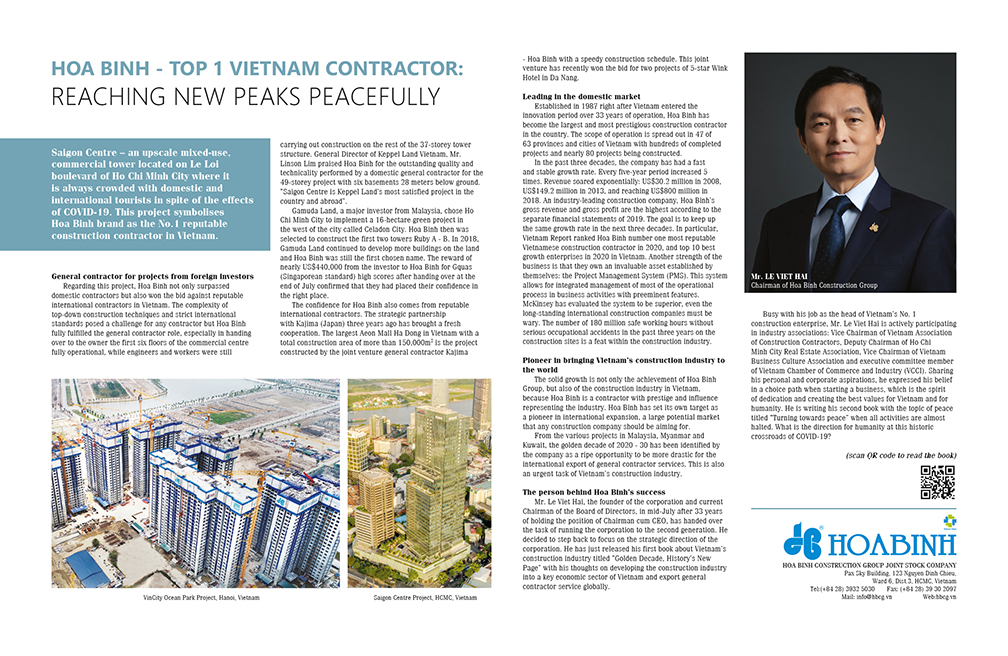