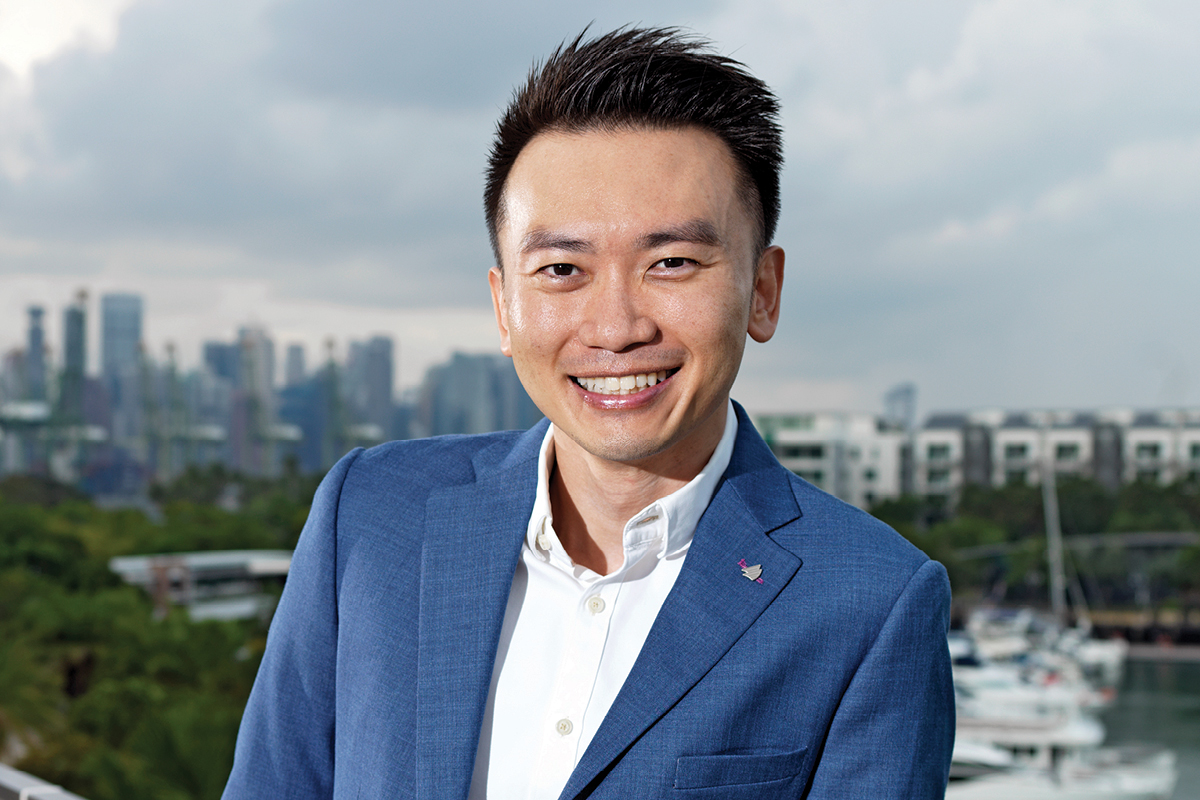 On the south coast of Singapore, amid its sparkling tropical waters, lies the tiny holiday island of Sentosa, a stone’s throw from the mainland. Known for its golf courses, resorts and of course Universal Studios, Sentosa Island is a must-visit destination for the discerning traveller.

And if you consider yourself an avid mariner, ONE°15 Marina is where you want to be, with world-class superyacht facilities and a modern clubhouse replete with an infinity pool, fitness centre, spa, restaurants and bars, hotel rooms, as well as yachts available for charter.

General Manager Teo Joo Leng runs the flagship marina club as a standard of quality for the rest of ONE°15 Marina’s properties – in New York, Malaysia, Indonesia, China and Thailand – with a vision to string the international and regional coastlines with world-class marinas.

What’s interesting is that he says the company took a risk in hiring him as someone without experience in marinas. This motivated him to give his utmost and the marina has gone on to achieve more awards and accolades, including Best Asian Marina under his helm in the past three years.

“My role, apart from managing the club, is about helping with our pipeline marinas around the world, bringing them to fruition,” he says. “The Sentosa Cove marina is the flagship marina and creates the haloed effect for the other ONE°15 Marina properties by upholding standards and imparting the requirements.”

The growing network of marinas is operated by SUTL Enterprise, an arm of lifestyle and consumer goods conglomerate SUTL. The conglomerate’s Chairman, Arthur Tay, has gone on record describing the ONE°15 Marina brand as the one he’s the proudest of and, having hosted international boating and watersports events, it’s not hard to see why.

In effect, Joo Leng has been granted the freedom to guide the ONE°15 Marina brand as it expands globally. “As we look to go ahead into uncharted waters, new territory, we’re always discovering new things and seeing how we can overcome new challenges and new situations,” he says.

“We’re always discovering new things and seeing how we can overcome new challenges.”

“The executive team members have been very trusting in allowing me to come up with new ideas and explore them. I appreciate this chance to do new things and bring the company forward.”

For example, the club has taken an active part in conservation with the creation of a coral garden at the marina to restore marine biodiversity in partnership with the National University of Singapore.

Joo Leng has seen enthusiastic support from the Group’s Chairman, and is passionate about restoring coral reefs and supporting the marine ecosystem. The club also educates boaters on reducing their impact on the reef and organises diving volunteers to remove trash from the water.

Another of the club’s recent transformations is the introduction of a customs and immigration facility, allowing vessels arriving in Singapore to be cleared there, rather than travelling to the nearby Sisters’ Islands.

The customs and immigration facility will provide great convenience for travellers commuting between Singapore and other international destinations, including its sister ONE°15 properties; in particular the Nirup Island marina, which is 20 minutes away by boat.

The new ONE°15 Marina at Indonesia’s Nirup Island, which is scheduled to open in two years, will host facilities such as resort villas, a beach club, restaurants, a spa, and 70 berths, making it the perfect getaway destination from Singapore.

The club has rapidly adopted digital technology to improve operations. Joo Leng described internal processes as traditionally basic, but organisational processes and guest services have now been digitised and automated without losing the human touch for members and guests alike. The club is also establishing a stronger marketing and digital presence.

Joo Leng says ONE°15 is taking it one step at a time, continuing to build the team around digital services, data and business intelligence. These efforts are in aid of producing a more robust brand image as the chain expands.

Joo Leng recognises, however, that new facilities and technology isn’t the be-all and end-all. He maintains regular contact with employees across the organisation.

“A huge element of leadership is communication, making sure that our people speak to each other, especially when there are multiple departments playing various functions,” he says.

Striving to create a harmonious work environment, Joo Leng promotes organisational values such as sincerity, engagement and teamwork among his staff via a daily newsletter that he personally reviews, which illustrates the importance of these values. He treasures a workplace where trust and true relationships can be fostered.

“Communication is key in ensuring expectations and aligning procedures,” he says.