To mark its 25th anniversary, all the way back in 1987, Marshall Amplification issued its Silver Jubilee amplifiers. The classic black Marshall decor was replaced with a silver exterior, and the commemorative model boasted a darker and thicker sound, even by the standards of Marshall, a company known for the distinctive crunch of its amps. But the Silver Jubilee model wasn’t limited to that one release; Jon Ellery, Marshall Amplification’s Managing Director, recalls its enduring popularity.

“For many years people were asking, ‘When are you going to reissue it?’” he says. “Things move on, and you think, ‘Do we really want to go back and reissue it? When’s the right time?’ Eventually, we decided to reissue it. We did it in a 100-watt head and cabinet, which is what the original Silver Jubilee model was all about. We’re always a bit cautious when we reissue anniversary products, but it was so popular, we had to bow to public demand.”

The success of the model is evidence of the deep and abiding connection between Marshall and rock music. The two are practically synonymous, thanks to the likes of Jimi Hendrix, Peter Townshend and Eric Clapton patronising the company in its early days. Founded by veteran drummer Jim Marshall in 1962, the company saw a need among guitarists for an amp with a little more punch, and it took off from there.

More than half a century on, Jon has celebrated his own 25th anniversary with Marshall. In that time, he’s seen the company continue to roll with the changes, remaining a defining icon in the landscape of rock music.

“People have become savvier in the way they shop and do business and we’ve adapted to that,” says Jon. “That’s why we’ve had a rebrand and invested significantly in marketing. We should be there in and among social media, that’s where we should be as a brand. We never take anything for granted. The customer always has a choice, but we want to be at the front of their mind when they’re deciding what to purchase.”

“It’s about getting people together and getting them to enjoy music.”

Though most famously associated with legendary artists of the 1960s, Marshall hasn’t found any less purchase with modern groups, like Muse and Gorillaz. By contrast, the company’s most recent evolution, Marshall Records, champions lesser-known (though no less talented) artists, giving them an industry leg up. Alongside its lifestyle products, including speakers, headphones and fridges, this gives Marshall a complete presence across the music industry.

“We want to provide the whole 360 degrees,” Jon says. “We produce the equipment that allows the artists to make music; we deliver the product
that allows people to enjoy the music; and we now record the music. That’s an exciting venture for us. With three strings to our bow, the challenge is making sure they all sing from the same hymn sheet and have the same voice.” Support from suppliers is invaluable as Marshall proceeds in this strategic direction. Companies like Softube and Zound Industries provide components integral to Marshall’s products, and Jon’s approach to those suppliers shows he recognises their contributions. “We’re not a ‘here today, gone tomorrow’ company with our suppliers,” he says.

“We like to work with them long-term, include them up-front in the products we’re developing. That way, we can both benefit and achieve the goals we need to achieve, in order to create new and exciting products.”

At the other end of the chain, Marshall’s international distributors have helped the company attain its global presence. The company isn’t so presumptuous as to think it can enter any market and succeed; in China, for example, Marshall distributes through local seller Algam, and that local market understanding has helped quadruple turnover there.

As the company’s offerings continue to grow, it’s not hard to see why Jon himself has spent 25 years with Marshall. He’s still clearly guided by the vision that first inspired Jim Marshall.

“It’s about getting people together and getting them to enjoy music,” he says. “That’s why we started the record label, because we want people to go and enjoy making music. For me, that’s what it’s all about. That’s what our brand has always been about. Jim loved the music industry, and he created this great guitar amplification company.” 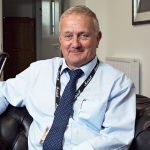