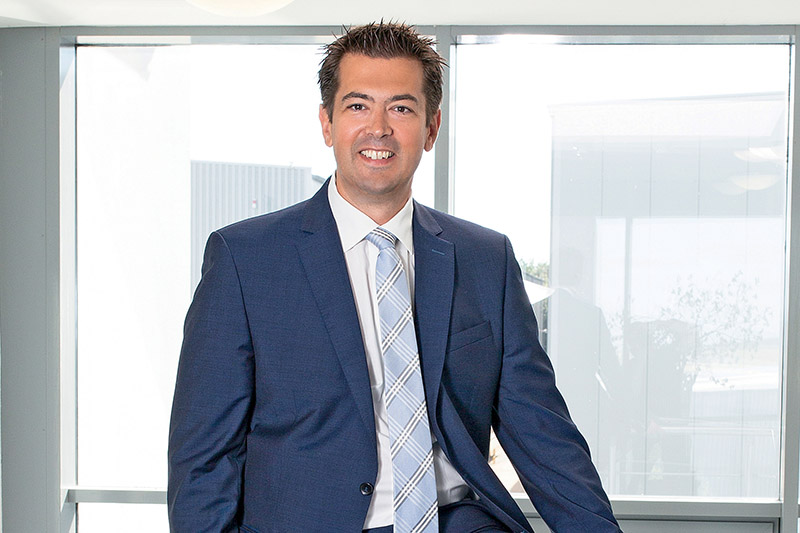 Big things, “heavy things” as Bob Greiveldinger describes them, are what CTI Systems (CTI) has built its business around. “We’re a company specialised in designing and manufacturing, planning and installing special equipment and solutions for handling purposes, whether the handling of people or goods,” the CEO explains.

And when he says heavy, he means heavy. “We’re talking about payloads of 10, 20, even 40 tonnes.” Established in Luxembourg in 1962, a 2009 acquisition saw CTI become a subsidiary of the Paul Wurth Group.

While it has built a name on extra-large pieces of handling equipment, it remains compact in size, with fewer than 200 employees and entities in Luxembourg, Germany, the US, Turkey and China. Bob, who had spent more than a decade with Paul Wurth at both its headquarters and abroad in China and Japan, joined CTI in 2018 as COO and became CEO in April 2019.

Of CTI’s three core markets – intralogistics, surface treatment and aviation – the former is its most generic. “These are typically tailor-made products and highly automated plants spread across many different industries,” Bob says.

But the latter happens to be globally the most accessible, thanks to one pioneering invention: the teleplatform, a telescopic platform operated by a crane system. Fitted to the roof, this network of platforms is able to cover the entire space of a hangar and enables people to undertake aircraft painting and maintenance.

We have the flexibility to change directions and move where the business is.

It is the teleplatform and its track record of success that allowed CTI to make a foray into Asia, where the company has built “a small but performing Chinese entity with operational competence in the sales and execution of aviation projects,” Bob explains.

“Technically, it is the superior product in the market and this is how we have been able to convince the Chinese market in a Chinese context.” Along with China, he cites Thailand and the Philippines as two other countries where he spots potential in the urban expansion investments their governments are making.

“Within such multibillion-dollar infrastructure programs, there will always be opportunity for us,” he says. While the full impact of the COVID-19 pandemic is still impossible to predict, Bob believes that much depends on the willingness of the government of each country to save their aviation companies.

“The support cannot only be to keep them at the status quo, otherwise they will be left behind. It needs to be strong enough to allow them to invest in the future,” he says. This, he explains, will offer CTI a chance to “find our way to business in the sector”.

While today much of CTI’s business in Asia is centred on its aviation expertise, Bob hopes that this existing reputation will act as a platform to generate opportunities across intralogistics and surface treatment systems as well.

The bespoke nature of these products and plants makes them more difficult to sell in remote countries, he explains, especially when facing local competitors who offer a similar yet less technologically advanced product.

Bob is excited by what he sees in China – “an ambition to become fully digital and highly automated – and the opportunities that will open up for smart production plants. He is also motivated by the contribution CTI can make to the development of countries in South-East Asia. “We can play a role in bringing them closer to an international level,” he adds.

Technical competence, quality and reliability are what Bob believes sets CTI apart in the marketplace. “We’re the company people turn to when they can’t find a standard solution elsewhere,” he says, adding that in these uncertain times, he hopes the market will remember this.

“If you have two investments planned and your budget is being cut, it is better to make one of them happen at a reasonable price level than to make both using nothing more than scrap.” Yet, with nearly 60 years of experience to draw upon, he’s confident the business can weather the coronavirus storm.

“Any company with such solid competence anchored in the brains of its people and its references, especially one with agility in the market, should survive such a crisis,” he says. “We are in such a position because we are small and don’t have a heavy set-up that weighs us down. We have the flexibility to change directions and move where the business is.”