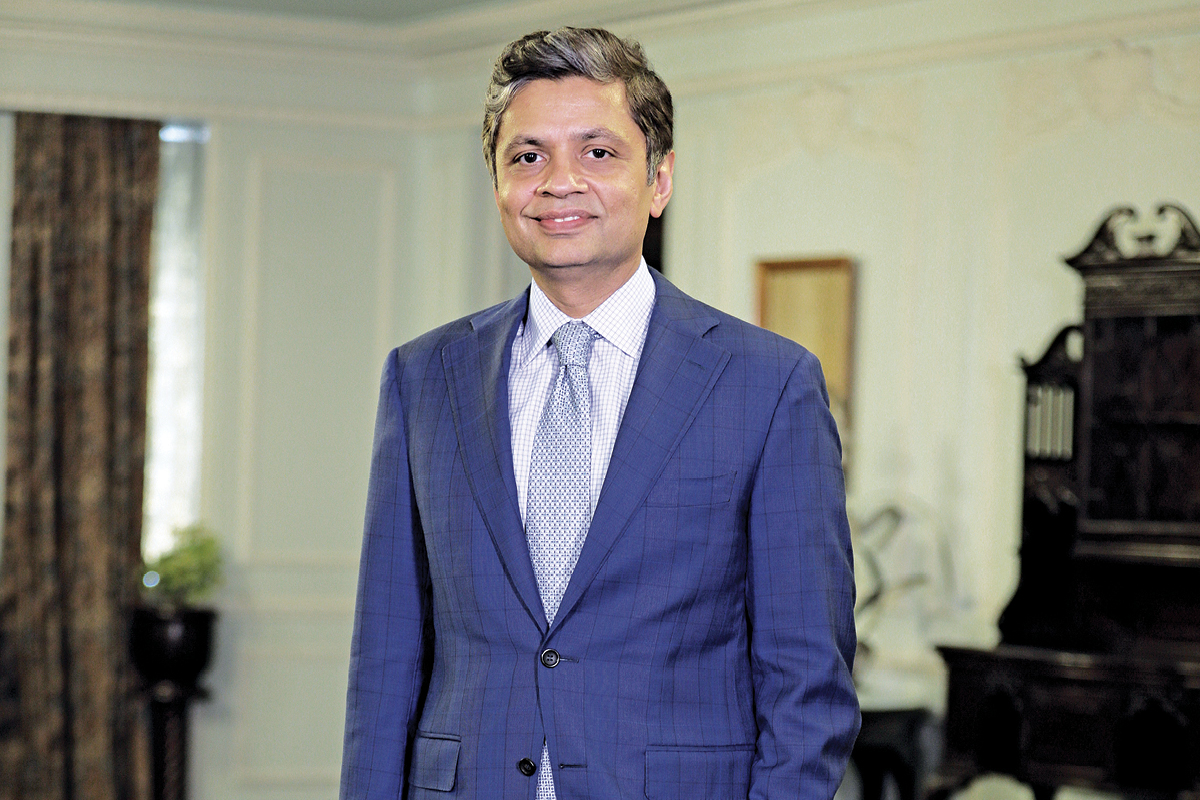 Having learned from the best, working alongside his grandfather for more than two decades, Chandra Shekhar Nopany was more than inspired when he took over the textile division of one of India’s largest multi-business conglomerates. He wanted change.

Despite a rich and successful 85-year history, and belonging to the renowned KK Birla Group, Chandra Shekhar recognised room for improvement at Sutlej Textiles and Industries. All he had to do was make it happen.

The company’s roots date back to pre-independent India, when Chandra Shekhar’s great-grandfather Dr GD Birla founded Sutlej Cotton Mills in 1934, in Okara, Punjab, which is now in Pakistan.

As the country fought for its independence and endured many years of upheaval, the composite textile mill continued to survive, until it was declared an enemy property by Pakistan. Sutlej then established spinning units at Bhawanimandi (Rajasthan), Kathua (Jammu and Kashmir) and Baddi (Himachal Pradesh).

Today, as Chair, Chandra Shekhar heads one of the largest integrated textile manufacturing companies in India, boasting a research and development department comprising about 70 people and a strong global client base in more than 60 countries throughout Europe, the US, South America and Africa.

Chandra Shekhar, a chartered accountant with a Master of Science in Industrial Administration from Carnegie Mellon University, inherited the company from his grandfather Dr Krishna Kumar, the former head of the KK Birla Group, which manufactures numerous products including fertilisers, sugar, chemicals and also provides engineering services.

In 2011, three years after his death, most of the companies under the KK Birla Group shed the KK tag as family members forged their own paths and identities.

“I had joined the company back in 1994 when it was a moderately sized business, very well managed and running efficiently,” Chandra Shekhar says.

“I worked alongside my grandfather in various divisions within the group, gaining experience in a multitude of areas. As time went on, however, we adopted a more focused approach to each business sector to promote growth.”

“When it came to Sutlej Textiles, we had these standalone spinning units,” he remembers. “But at the end of the day, a spinning unit is a spinning unit. What’s the big deal about it? It was just one of thousands of others operating throughout India. We decided we had to discover something really special, something that would set us apart from our competitors.”

“We decided we had to discover something really special, something that would set us apart from our competitors.” 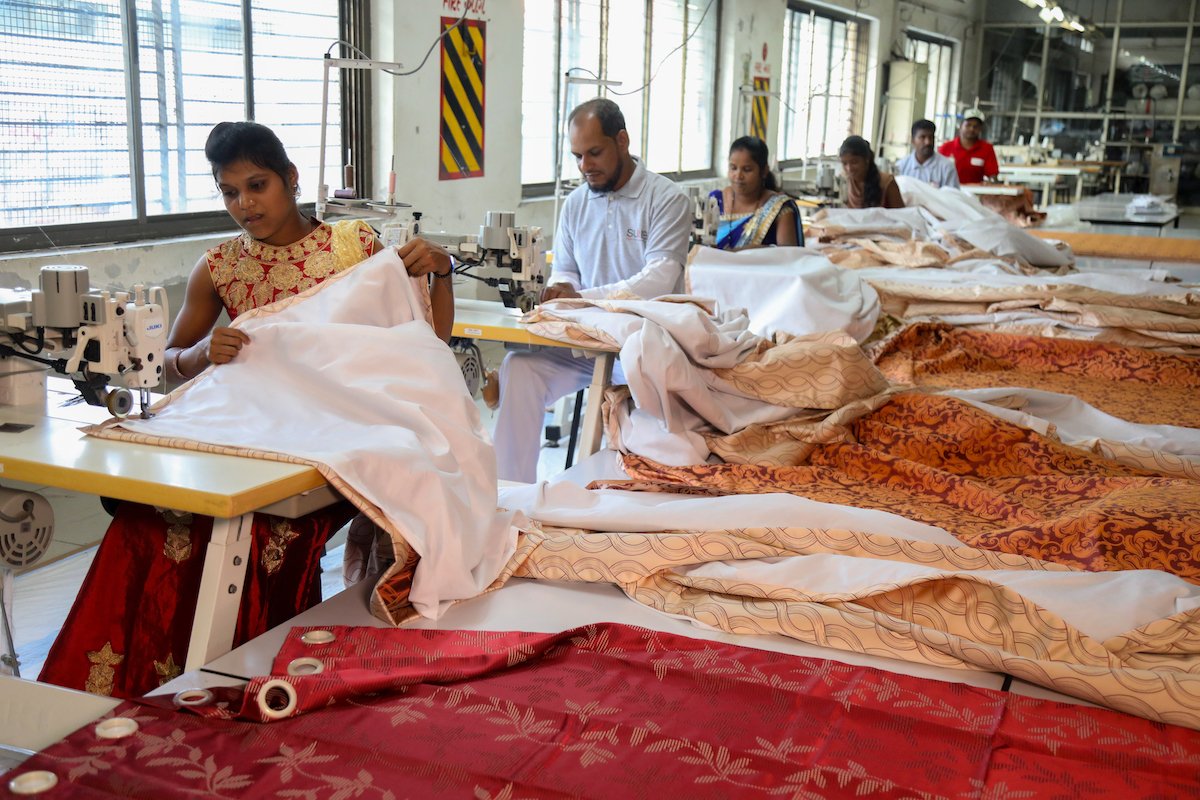 Chandra Shekhar says the strategy itself was simple. Opportunities needed to be identified which would not only enable Sutlej Textiles to diversify and offer incentives to retain workers but also become more cost-effective.

It was an interesting challenge considering the textile industry is one of the oldest sectors in India’s economy and charged with competition.

The industry employs 35 million people and contributes to seven% of India’s industrial output, two% of the country’s GDP and 15% of its export earnings which, during FY2017-18, stood at US$39.2 billion.

Chandra Shekhar’s first step to promote growth in such a volatile environment was to expand product innovation.

“When we started the company, we were only in synthetic yarn, so we ventured into producing specialised yarns, finding niche markets, where we established a leadership role, whether it was cotton, melange or other types of fancy yarn,” he explains.

“But we identified opportunities everywhere. For example, we set up a unit in Himachal Pradesh that is focused on cotton and specialised cotton products, while our unit in Rajasthan focuses more on exports because of its versatility. Similarly, we looked at energy, which, apart from raw materials, is a major cost for the textile unit. So, we set up our solar plant at Rajasthan to try and become more energy efficient and reduce costs.”

“We also spent a lot of money on the expansion of facilities in Jammu and Kashmir although it was a politically troubled area. It’s a hotspot with a lot of unrest and it’s difficult to retain people. I’m sure a lot of people were asking why we bothered investing there. But we provided many facilities for our workers, virtually a little township at the plant itself, and that has enabled us to retain people and obviously get better returns.” 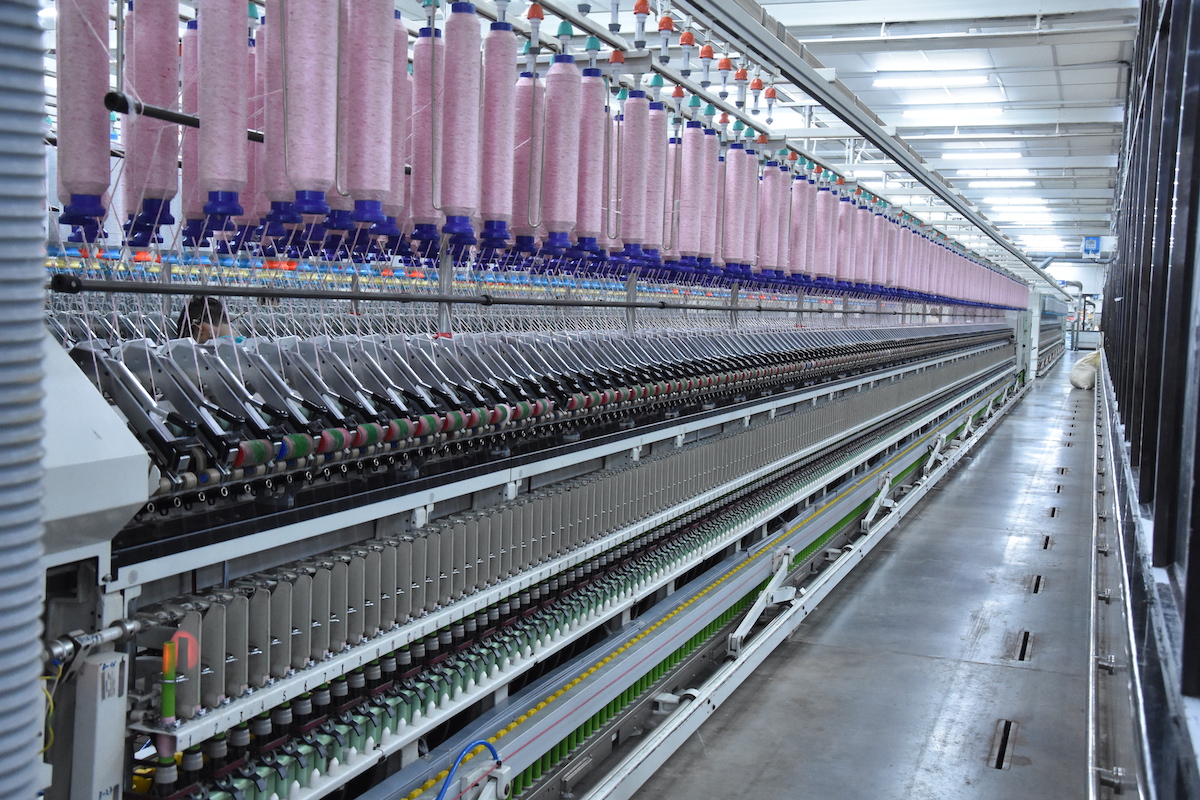 While producing yarn continues to be a vital business for Sutlej, the company has expanded its product portfolio to include home textiles; making upholsteries, furnishings and draperies, to become the fastest-growing manufacturer of home textiles in the country.

In 2017, the company also acquired American Silk Mills, a century-old company based in Plains, Pennsylvania, enabling it to supply to American markets.

“This is one area I am very bullish about and where we intend to grow at a much faster rate,” Chandra Shekhar says. “Another area we are entering is recycled fibre. In fact, the Board has recently approved a plan to set up a recycled fibre plant in Himachal Pradesh – a vertical integration for us.”

“It takes a lot of time and a lot of hard work to identify each opportunity and how to utilise it to its fullest potential,” Chandra Shekhar adds. “Ultimately, we have set our sights on providing end-to-end solutions, from yarns to home textiles, providing maximum value for our customers and becoming their partner of choice.”

Chandra Shekhar modestly describes that the company’s new approach has resulted in the business “actually doing quite well”. Since being equipped with 127,000 spindles in 2004, this figure has grown to 419,000 and turnover over the past decade has increased from INR800 crore (US$113 million) to INR2,500 crore (US$353 million).

Chandra Shekhar says an increased focus on employing the right people – including more women – was another strategy that helped boost productivity. “You see, when I got into this business, one thing was clear, it’s a very thin-margin business,” he explains.

“While you would like to go into specialised products, where you increase your revenues, you also have to look at cost control. We run a very tight ship here, so a lot of time was spent ensuring we have the right person in the right role.” 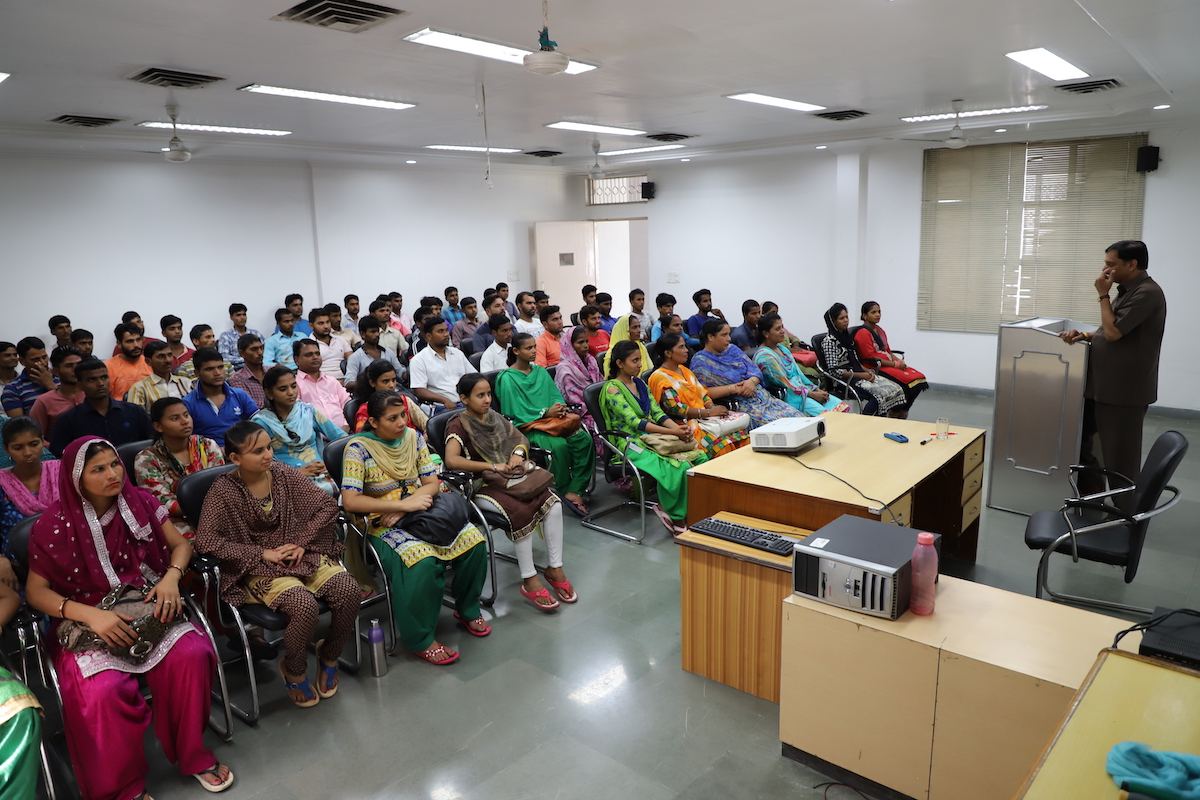 “We have 15,000 employees and, of them, 3,500 are women. That’s an enormous increase and a figure we plan on expanding. We discovered that empowering women not only helped us increase our productivity, but also improved discipline and efficiency on all fronts.”

Many of Sutlej’s employees have been with the company for a long time, some up to 40 years. Chandra Shekhar believes it’s the company’s investment in people that has guaranteed loyalty and commitment.

In 2016, during India’s demonetisation of INR500 and INR1,000 banknotes, there were prolonged cash shortages affecting thousands of Sutlej workers. “It hit everybody,” Chandra Shekhar remembers.

“So, overnight, we started a coupon system and made a deal with major suppliers where we would pay them to offer rations and food at supermarkets.”

“With those coupons, the workers could go and buy the essentials they needed. We work proactively like that with our workforce on a continuous basis, running a number of incentive schemes and offering housing with benefits such as water and electricity.”

“Our training centres are always full, with at least 1,000 heads in development. We keep investing in that. It’s another thing that definitely sets us apart from our competitors.”

Our training centres are always full, with at least 1,000 heads always in development. We keep investing in that.”

“We have long relationships with them, they depend on us and we become their preferred supplier. And while new customers are good, we don’t chase after them. It’s the repeat orders we like to focus on. Those customers make up our entire backbone, the basis on which we’ve been able to take this company forward.” 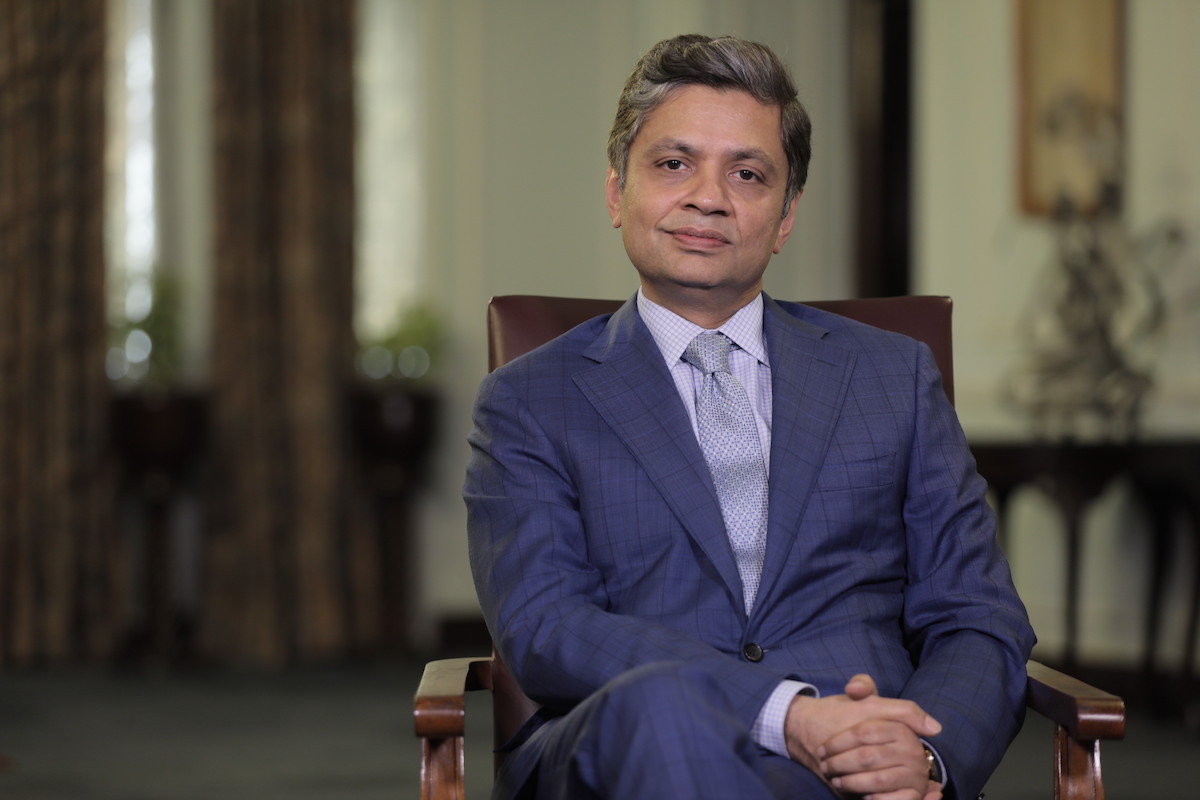 Chandra Shekhar believes Sutlej is on a preferred list for buyers because of its impeccable reputation for doing business. “We make prompt payments and have hassle-free dealings,” he says.

“We have been working with many of these companies for umpteen years and once we give our word, we are committed. Even if the price for the raw materials drops during the process, we will honour our buying price, whereas other companies would renege on the deal and want to buy at the lower price. When we give our word, we stick to it. There’s never a dispute because everything is so amicably sorted and moves very easily.”

“Our relationships are such that our suppliers go out of their way to give us extra support whenever we buy from them. Some of our relationships go back half a century. As a consequence, and I touch wood, we do not ever have any shortfalls when it comes to our raw materials, which means we can always deliver.”