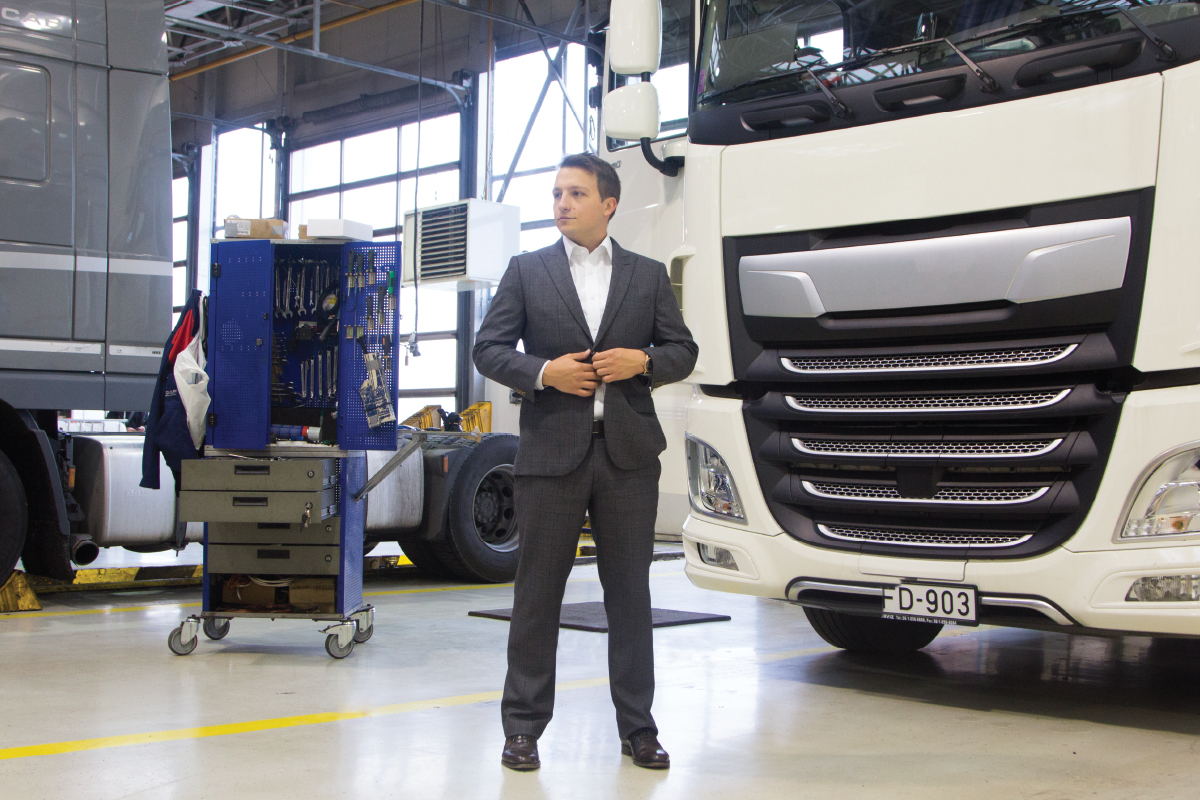 Starting out as “assistant to the assistant of the assistant”, David Kiss has worked his way up the ranks of European vehicle manufacturer DAF Trucks since 2006. Now Managing Director at just 33 years of age, David has built a successful international career based on long-term customer care, innovation and a desire to exceed expectations.

DAF is a global organisation with 90 years’ experience in vehicle engineering and manufacturing, delivering its one-millionth truck in 2015. Its products are sold and serviced by a network of more than 1,000 independent dealers throughout Europe, the Middle East, Africa, South America, Australia, New Zealand and Asia.

DAF is a wholly owned subsidiary of PACCAR Inc., a worldwide quality leader in the design and manufacture of premium light, medium and heavy-duty commercial vehicles. Every DAF vehicle is built to order from a range of cab, chassis, driveline and electronic configurations, providing the lowest operating cost per kilometre as well as optimum comfort.

Starting from the bottom

“I’m not even sure I had an official title in the beginning,” recalls David. “Ten months after I started, I was promoted from assistant to the next level and, 10 months after that, I was promoted again to Junior Manager. By my third year in the company, I was Country Parts Manager. In 2013, I moved to the UK to act as the PACCAR Parts Fleet Services Manager.” 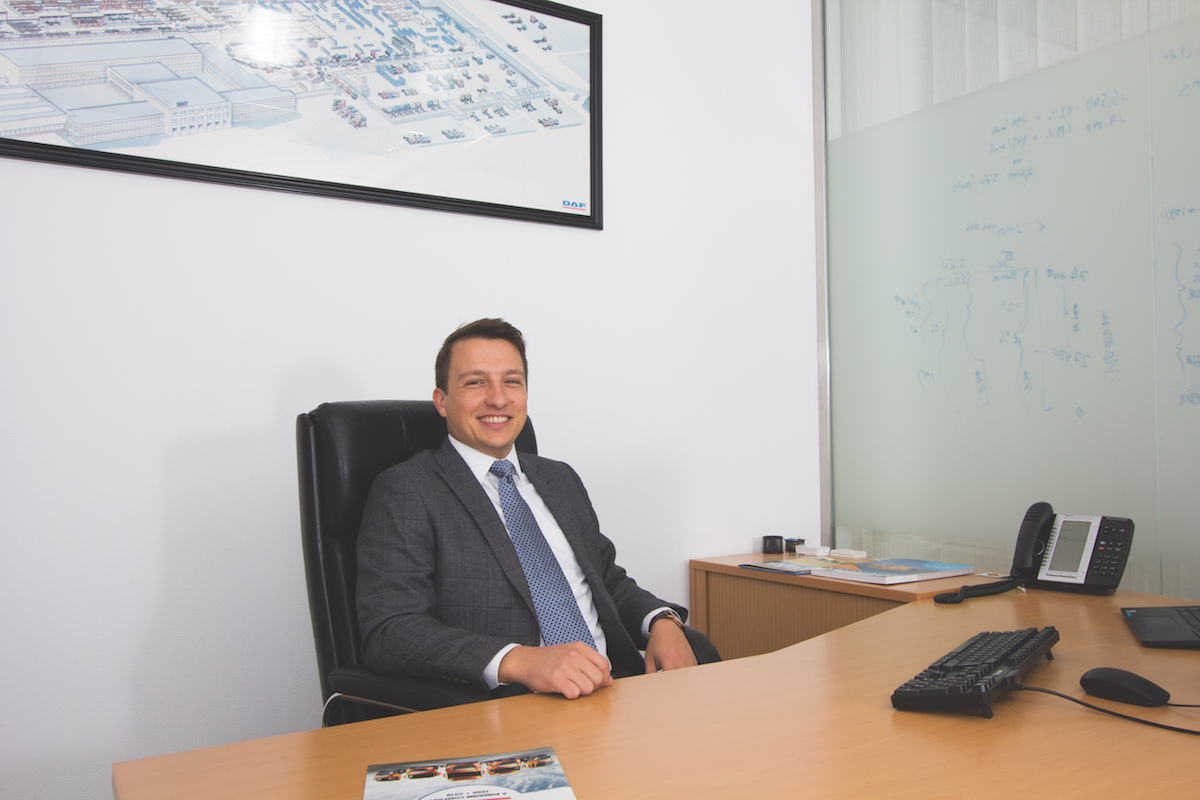 In 2016, after a 10-month tenure with Peterbilt Motors in Texas (another PACCAR nameplate), David returned to DAF Trucks Hungary as Managing Director of two of DAF’s Hungarian entities: DAF Hungary and its wholly owned dealership. “Although I loved working in the US for Peterbilt, from my very first days at DAF I could already tell that I was going to love it here.

Age is no barrier

“I’m one of the youngest in management in the company,” says David, who recalls, from his early years with the company, working on a project with an older, more experienced colleague based in the Netherlands. After communicating solely via email and telephone, David tells of the surprise upon finally meeting face-to-face.

“When I turned up at his office for a meeting, he was shocked when I introduced myself,” says David. “For the first 10 minutes of the conversation, I could tell he was thinking, ‘What am I doing with this child here?’ An hour later, his attitude switched.

I earned his respect and he began to take me seriously; he saw me as a person who could help solve the issue we were discussing at the time. This scenario has happened multiple times where people thought I was just a kid in a suit. I’m continually underestimated.”

In 2016, when David was made Managing Director, his first challenge was to improve the company’s visibility into ongoing sales. “I worked hard to pull our departments together to come up with holistic solutions for our customers,” he says.

“This started within the sales division and quickly spread throughout the rest of the company, and even to DAF companies abroad. We updated our data system to include real-time information that allows us to react quickly to market changes. Not only does this give us a competitive advantage, but it also boosts morale because we’re efficient and we’re winning more.

It’s all about the service

“The culture of DAF is very much like that of a family. We invest in our employees through coaching and mentorship programs and give them every opportunity to grow. We’re currently trialling our ‘Customer Champions’ – managers who are experts on one account. They completely understand the wants and needs of a particular client so we are able to provide tailored products and advice.

“Locally, we are renowned for our customer service. During the lifetime of a truck, we establish multiple points of contact for our customers and that’s something the entire organisation is very proud of. Our customers know that we’re the best in the market and that brings great responsibility – we never take our eyes off the ball,” explains David.

On David’s agenda for the next 12–18 months is the expansion of DAF’s reach throughout Hungary. “There are still a few fleets out there that don’t include our trucks and haven’t experienced our level of service. We look forward to establishing long-term partnerships with them.”

Impressively, DAF has retained its position at the top of the market in Hungary for close to a decade. “Our greatest achievement has been maintaining market leadership in Hungary since 2009. When my predecessor left to work for a competitor, we feared we would lose market leadership. It was a real challenge but I’m proud to say that we continue to finish as number one,” says David.

“We have also managed to achieve a seven per cent increase in fuel efficiency in our CF and XF trucks compared with our previous models, which were already industry leaders in fuel consumption. We’re hearing of even higher figures from some of our customers. On average, three per cent is equal to approximately €3,000 in decreased spending per truck in a fleet of hundreds
or even thousands, so seven per cent is making a huge difference to our customers.

Looking toward the future

“We refreshed our entire product line last year – right from our six-and-a-half tonne segment all the way up to our flagship XF model, which is almost selling itself. Beyond the technical innovations of the truck, we are seeing a trend in the importance of data as the managers, drivers and mechanics of trucks continue to demand smarter technology. This is where much of our research and development is focused,” says David. “Our parent company PACCAR recently developed a division that looks at technologies not for the medium term, but a step further than that – they’re looking at the future of truck transportation.”

Late last year, the leading Hungarian Révész Group placed an order for 400 new DAF CF and XF trucks, the largest quantity awarded to a single manufacturer in Hungary in 2017. After evaluating several brands, it had determined DAF was the best in terms of total cost of operation.

“This is a massive win of 400 of our XF trucks for Waberer’s fleet. Prior to choosing a winner, Waberer’s organised the independent fuel consumption testing of four competing brands. As
we were awarded the majority share of the tender, it’s clear that the performance of our trucks excelled.”

In November last year, DAF’s new CF/XF truck range was voted International Truck of the Year 2018 by an independent jury of 23 commercial vehicle editors and senior journalists from around Europe.

The prestigious annual award is presented to the individual vehicle or model range that has made the greatest contribution to road transport efficiency, based on criteria including technological innovation, driver comfort, road safety, fuel economy, environmental footprint, and total cost of ownership. “I’m very pleased with these achievements as they pave the way for further success in 2018,” says David. 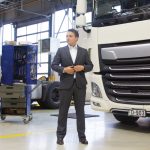