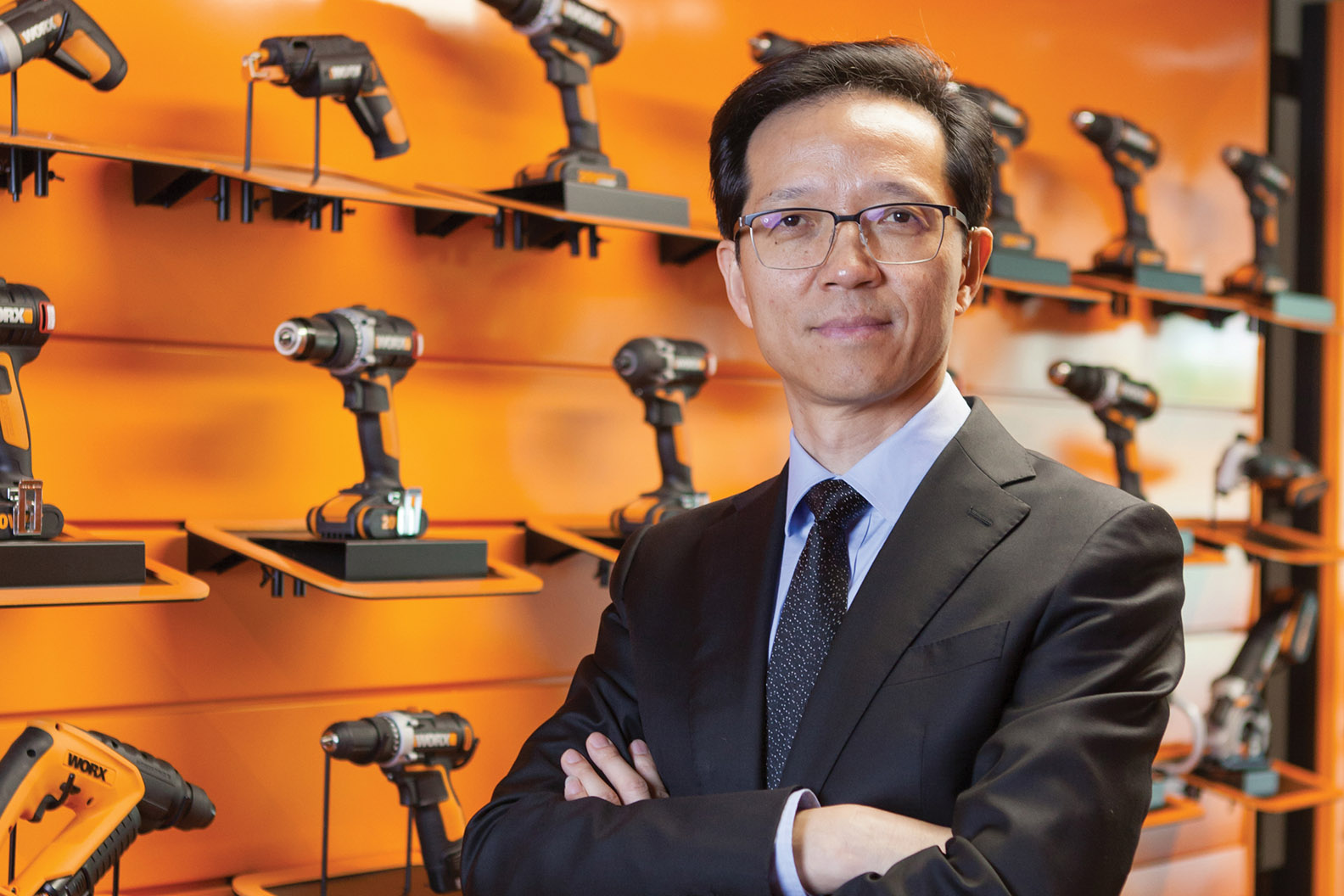 For millions around the world, weekends mean relaxation away from work, alongside a list of chores and projects to be done around the house. The urge is virtually universal in its pull, creating a global army of do-it-yourselfers who demand tools and gadgets to turn their handy projects into something resembling a professional job.

There’s no shortage of ingenious devices to arm these weekend warriors, and for the manufacturers of these tools, standing out in a very crowded market is a constant struggle. But one has achieved global recognition.

It was originally a tool manufacturer for brands such as Black+Decker, but Don decided in 2004 to become independent and manufacture the company’s own gardening products under the name WORX.

In 2007, the company acquired the Rockwell brand and produced a wide range of tools under that name. By 2014, it employed 4,000 people in facilities in the US, China, Spain, Brazil, Australia and Canada.

“While Positec is Chinese and headquartered in China, it really is a global company,” Don explains. “We have 14 subsidiaries in all the major markets around the world, and for those markets where we don’t have subsidiaries, we have distributors. Really, we cover almost everywhere around the world except for some parts of Africa.”

Under Don’s guidance, Positec is relentlessly pursuing new technology formats for its product range, presently with a particular focus on robotics and electric power.

We need to reduce the materials, consumption and waste from everyday life.

More than 10 years ago, Don says, it developed the first electric, cordless walk-behind lawnmower that could cut 1,700 square metres per charge. This lawnmower range has achieved great success, and Positec has expanded to include a robotic product range. But Don insists its development is nowhere near done.

“In the past 15 years we have focused on technology and product innovation. Because we are focusing on innovation, it gives us payback for this premium branded position. A few years ago we acquired a German brand called Kress, but our major plans are for WORX. We achieved this branding position through quality – we relentlessly trade in quality, quality, quality.”

In a saturated global market with a bewildering array of brand names, product lines and gimmicks, differentiation is both necessary and extremely difficult.

It is a point of difference for Positec that Don acted on his observation that most companies manufacture and sell tools that are very similar in appearance and quality, so sales margins are depreciated and nobody in the manufacturing-retail sector benefits.

He decided that instead of trying to sell to everyone, his company would choose a few strategic partners and offer exclusivity through universal recognition of the products’ quality to tackle a more discerning market. It worked.

“By doing that, I immediately got some customers on board,” Don shares. “They’re going to be very strong customers. Still today, after 15 or 16 years, they are selling WORX branded products, so this is how we can build strong relationships with our partners. Because we always think of the problems and challenges they have, we try to be their solution rather than increase their troubles.”

The second technology field Positec is developing is electric battery powered gardening tools, rather than petrol-driven equipment. Don recalls that from the beginning, the company had decided not to manufacture fuel-driven tools, due in large part to their pollution problems. “A big trend around the world is people looking into battery-driven, cordless tools, which have a tremendous technological advantage over traditional gasoline,” he reveals.

1994 – Positec Tool Corporation founded by Don Gao in Suzhou, China. Supplies OEM tools to brands such as Black+Decker and Bosch
2004 – Positec launches WORX brand of lawn and gardening equipment, and hires designer Paolo Andriolo
2005 – Don Gao partners with Tom Duncan, who owns the Rockwell brand, and sets up North American division in Charlotte, US
2007 – Positec launches WORX GT infomercial and sells 313,000 units that year
2009 – Rockwell and WORX tools retail at Lowe’s in the US
2014 – Positec employs 4,000 people in 12 subsidiaries globally

“From day one we decided we will never go to gasoline products because of the pollution it produces. The US EPA says 5% of the total air pollution created by human beings is generated by homeowners’ petrol lawn equipment. Can you believe that? That’s why we work on what we call the Power Share battery platform, so owners only have one power battery for all their tools.

“We need to reduce the materials, consumption and waste from everyday life. That is why we started Power Share – we knew from the product design stage that we needed to have this sustainability concept in our product design.”

Positec’s environmental credentials stretch to its own premises and production facilities, with an investment of millions of dollars in solar panels, window panels, roof heating, natural lighting, and rainwater collection and cleaning for reuse at the company’s head office and production areas.

That’s something that came about in a curious way, Don says. In the early days of 2010, he started a foundation to go into ‘green’ production, with the realisation that the world of manufacturing needed to move to more environmentally friendly processes, and donated US$10 million (€8.3 million) to it.

Unfortunately, the foundation was not approved due to local regulations, so he used the money for his facilities instead as a measure of goodwill and a demonstration of what could be achieved.

Power of the personal

After 26 years, Don feels that the contemporary business phase has a different driving force, partly through technology in a dynamic expansion of online trading and communication, but also due to the new demands arising from the COVID-19 pandemic. He also feels it personally in his own approach to the opportunities presented to Positec.

There is so much it can bring to the power tools market through new technology, innovation and better solutions for customers, that it really feels like a personal achievement to him. “That’s one exciting aspect, but on the other side, one thing that has never changed is my team,” Don says.

“I started the company 26 years ago with just four people; today we have more than 4,000. I’m so lucky that we all work together, we have the same values, we want to achieve the same things and we’ve worked so hard. I have been lucky to work with a group of creative, hard-working, dedicated people. It’s my team who are really driving that. It’s the pressure, it’s the present, it’s really a happy working environment.”

That is part of the reason why Positec is still a family business, and according to Don, works together as a tight-knit unit. “It’s not a listed business, because if you treat people like your family members, people will treat this company as their home,” he says.

“This is the reason why the whole team is so devoted. As I said earlier, I’m so lucky, but I’ve been lucky for 26 years because I have one principle: every person working here is a family member. We need to look after everyone working here.” That’s especially the case as the pandemic continues to restrain the global economy.

I’ve been lucky for 26 years because I have one principle: every person working here is a family member.

“It has really hit everybody,” Don confirms. “It’s a little positive for us because people cannot travel and they spend more time at home, so they are taking on gardening and DIY projects. In fact, that’s why we have actually grown during the past year versus 2019’s growth, when stores were not closed.

“I can see it’s going to be like this for the next six months to a year, fighting with coronavirus, but we’re going to win the war and business is going to recover slowly but steadily. What that means is our business is not going to have a dramatic change, so I would not see a slowdown or going into negative. We’ll continue to maintain investment and innovations, so it’s mostly a strong forecast. People want to do things, so we are going to invest even more strongly, because the prospects are positive for our industry.”

Don’s positive view of the future takes into consideration the trade issues that have developed over the past few years between the US and China, and its ramifications for other countries as the global economy feels the strain.

“With the US and China in this kind of confrontation, struggling and causing challenges for the world, I see these things in a different way,” Don says.

“Today we have all our manufacturing in China, but I believe we need to look at the global market and how to take real value to local people. That means we should include sales and R&D with that. We’re not only in China – we design the tools in China – but we also have an R&D centre in Italy and Australia.

“So we need to look into global manufacturing as well so that our supply chain is balanced. Many of the large multinational companies have already been doing that, but we are going to be more globalised in our reach and our intentions.”t 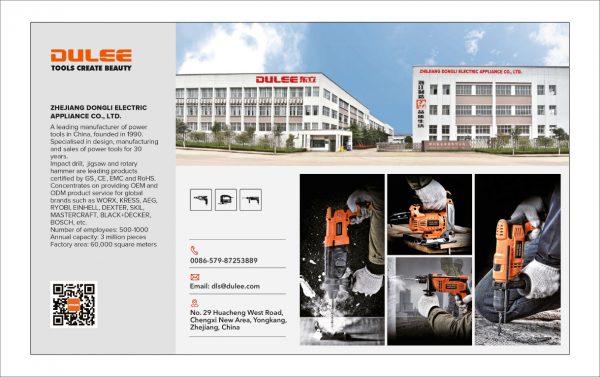 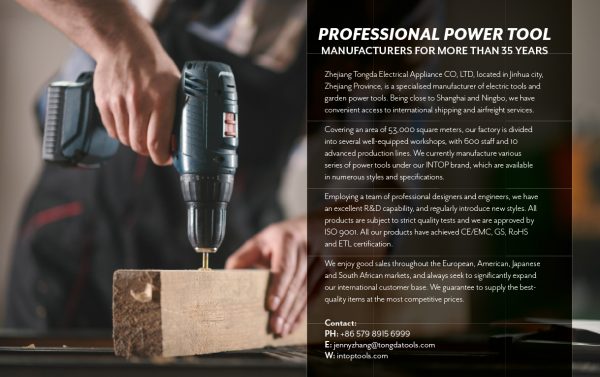 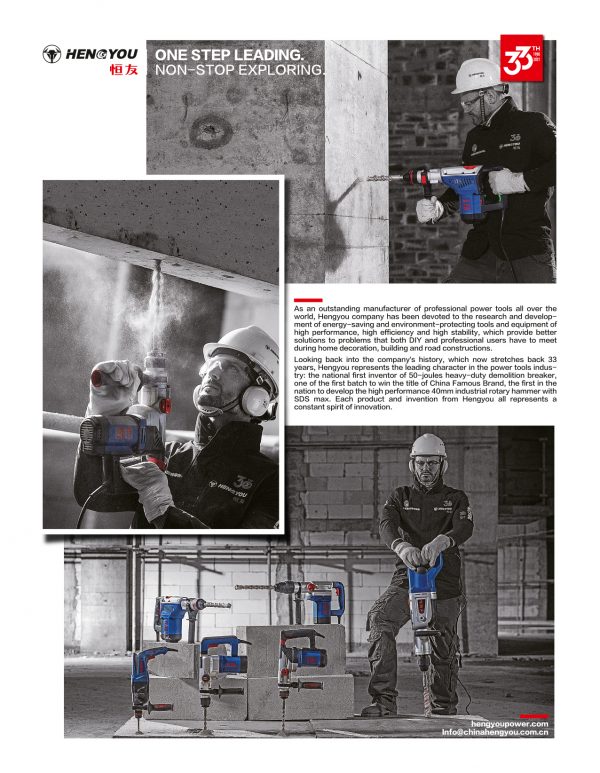