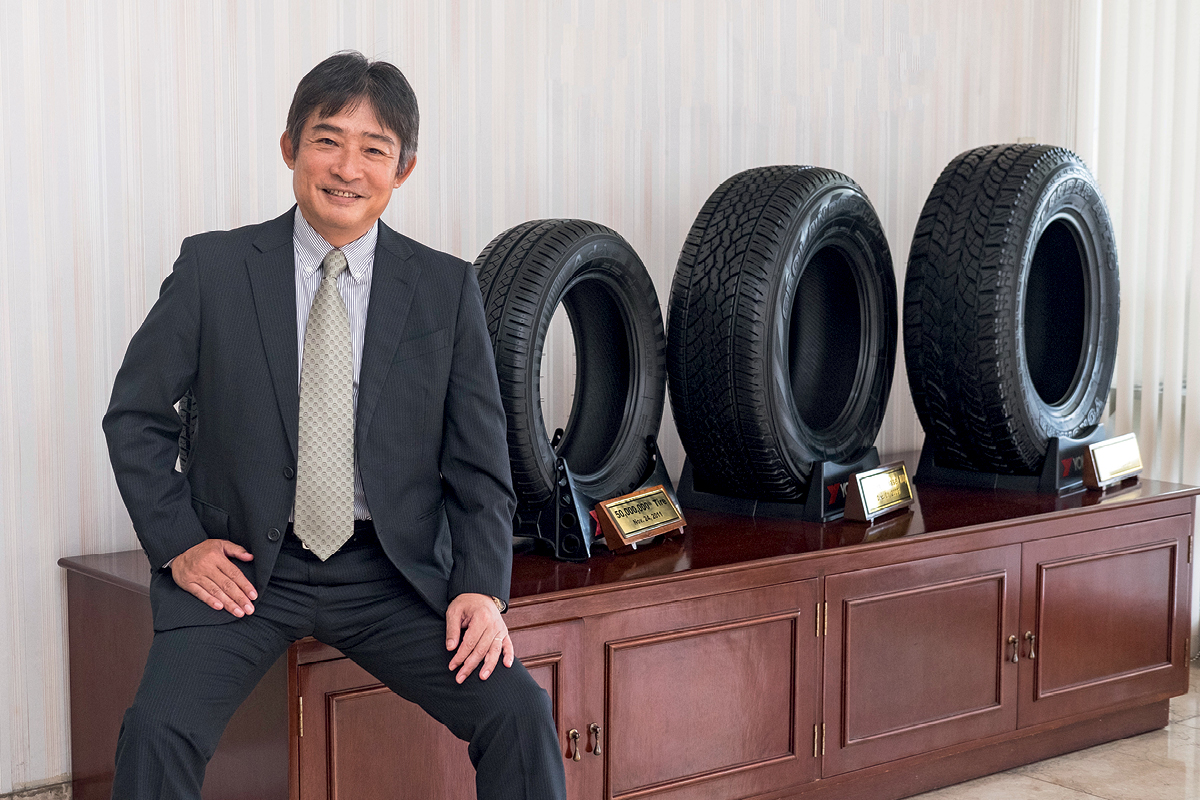 Should you ask Hitoshi Kobayashi, President and CEO of Yokohama Tire Philippines Inc (YTPI), what his motto is, he’d tell you it’s “keeping one’s word”. That philosophy informs the way he’s managed his career, which has been characterised by dedication and commitment to Yokohama’s mission. For example, when he was given charge to oversee the group’s Vietnamese division in 2012 some years before he came to the Philippines, a daunting task lay ahead of him – but he wasn’t discouraged and quickly set to work.

“When I was assigned to the Vietnamese plant just over six years ago, it wasn’t operating at its best,” Hitoshi recalls. “Many employees had complaints about processes and operations. Unfortunately, there had been poor communication between management and employees, and between the Japanese and Vietnamese divisions. There had been a lot of miscommunication.”

“To understand the situation, I decided to interview all the employees one by one to listen to their complaints. I continued to have interviews with everyone in the factory,” he reflects. “After that, we tried to put our minds together to improve plant operations. We wanted sales to start going up again, and we wanted to achieve our production goals every month and every year.

“It was a success. Before, the Vietnam plant hadn’t been operating at its best, but after one year, we’d done enough to earn praise from Yokohama’s president. At that time, Vietnam became Yokohama’s number one plant,” he affirms. “My success in Vietnam brought me to my current role. I’ve gone from the sales department to production divisions, and I’ve now been assigned to Yokohama’s biggest overseas plant.”

Hitoshi’s role in Vietnam was far from his first position with Yokohama since joining in 1986. Early on, he was charged with overseeing production schedules for the company’s Japanese tyre plants, and eventually moved to the US in 1997 to work at Yokohama’s first overseas plant in Virginia.

After eight years, he returned to Tokyo, spending three years as the general manager of the logistics department, later overseeing sales and marketing for South-East Asia, India, Africa, Australia and South America. Following that, Hitoshi managed several plants in Asia – including the Vietnamese plant – before finally being assigned to Yokohama’s Philippines plant, YTPI, early last year.

Today, Hitoshi has settled comfortably into a role overseeing the Philippines plant in a market with promising growth. “Several years ago, a manufacturer abandoned the Philippines, so Yokohama is the only company manufacturing tyres here,” he explains. “The company is growing. We’ve been getting bigger in the ASEAN region recently, and have a stronger presence here than in Europe. YTPI is now in a better position – and ideally, we will have the leading market share.”

“‘Safety first’ is the most important factor in operating our plant.”

At last count, the domestic tyre market was expected to exceed US$900 million by 2021, partly due to the Philippines’ surging GDP and the increased disposable income of its vehicle owners. Nationwide vehicle sales have increased, a trend expected to continue as the country grows. Most of the Filipino tyre market is fed by imports, giving YTPI a unique advantage, Hitoshi notes.

A fire last year, which YTPI has made recoveries from, has led the company to futureproof against future incidents. The company also foresees significant renovations and reconstruction expected to improve its capacity for the future.

At any rate, having started production in 1998, YTPI has made great strides in terms of its ability to manufacture a huge number of tyres for both domestic and international markets.

Since the fire, Hitoshi has made a commitment to ensure the utmost safety in the plant. Last year saw a record low of factory safety breaches, and numerous safeguards were put in place on a weekly and monthly basis, such as studies, training, drills and events with the fire brigade. These resulted in a 100% behavioural compliance rate for each of the company’s 10 ‘Safety Culture Values’.

“‘Safety first’ is the most important factor in operating our plant,” Hitoshi says. “We’ve undertaken many activities to achieve total reduction of accidents. To achieve zero small fire incidents, we have also performed fire hazard studies with the participation of all employees.”

“my success in vietnam brought me to this role.”

Hitoshi already feels a lot of responsibility due to YTPI being the largest of Yokohama’s plants globally, but going forward he nevertheless aims to make it the most productive and profitable tyre plant in the ASEAN region. Without the existence of data for tyre market share in the Philippines, it’s hard to tell where YTPI sits compared with other retailers, but that doesn’t make Hitoshi any less determined to achieve his ambition. 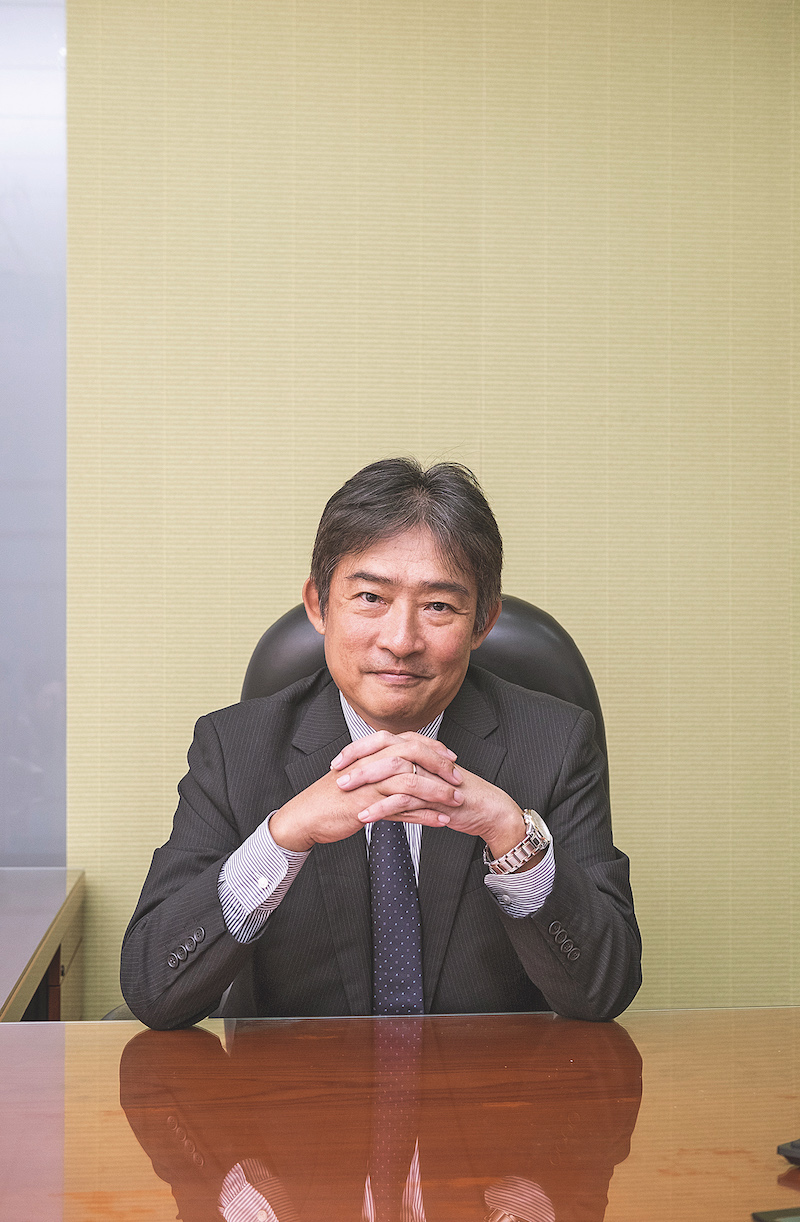 Part of the manufacturer’s strategy involves combining Japanese engineering expertise with local craftsmanship. Hiring locally has been YTPI’s strategy since it opened its doors, and the company even sent its Filipino team to YTPI’s parent company, Yokohama Rubber Company in Japan, where they were trained in producing quality pneumatic tyres.

Throughout their employment, Hitoshi provides the YTPI team with a healthy corporate culture, largely through his emphasis on communication. As evidenced by the way he successfully revolutionised Yokohama’s Vietnam plant, face-to-face dialogue with all levels of the workforce is an important element of this strategy. It ensures Hitoshi and the entirety of YTPI sees eye-to-eye on the mission and values of the company, and Hitoshi can get an insight into how his team thinks.

“The motto I’ve used for five years, in both our Vietnamese and Japanese tyre plants, is that the priority is good communication, dialogue and trust,” he explains. “When I say trust, I mean for both management and employees. It speeds up processes. YTPI is a big plant. To ensure effective communication and trust in each other, I talk to staff individually whether they are department managers, section managers or supervisors.”

Hitoshi also considers good communication a necessity for preserving productive relationships with suppliers. Fortunately, YTPI’s relationship with these partners is eased by the fact that most of them are Japanese companies, so the cultural closeness makes it easy for Hitoshi to manage such connections.

Of course, communication alone isn’t sufficient for creating a healthy corporate environment. Ensuring employees feel motivated and appreciated through rewards and praise is another essential facet of leadership.

“CTK Asia Rubber Corp believes in and supports YTPI’s vision to be a word-class tyre plant. CTK and Yokohama have built a good relationship, with mutual trust and respect, to make both successful and competitive companies.” – Ju Hwan, Cheon, CEO and President, CTK Asia

“If our team achieves a good score for technical completion, we have a celebration,” Hitoshi says. “If we achieve the target for our production record and minimise accidents, I give all employees a bonus, called the ‘President’s gift’, or I might give them lunch tickets for the canteen.”

That’s not all that YTPI provides its employees. Important healthcare services are offered to the team as needed, and the company provides health awareness seminars and medical assistance. The company also assists the broader Filipino workforce, granting scholarships to qualified college students. These scholarships give recipients the chance to work with YTPI upon graduation, and encompass various branches of engineering, as well as IT and accounting.

Efforts to advance the industry as a whole are evident throughout the Yokohama group. It has implemented numerous research initiatives to improve rubber and tyre manufacturing. Most recently, for example, Yokohama worked alongside natural science research institute RIKEN and rubber manufacturer Zeon Corporation to help produce isoprene (an important component in synthetic rubber) from biomass. Using sugar as a starting point, the process could help reduce dependency on petroleum for rubber production, and thus reduce the industry’s carbon emissions.

Another recent project was intended to improve understanding of the biosynthesis of natural rubber, with the collaboration of two Thai universities. The fact that the world’s rubber production is focused in South-East Asia makes this a particularly important initiative – the effective maintenance and development of rubber plantations is therefore critical to industry survival.

Though some might consider rubber manufacturing an environmentally harmful industry, the Yokohama group have the utmost respect for maintaining nature. YTPI outlines a basic standard of environmental friendliness for each of its products, which includes four basic criteria: prevention of global warming, resource recycling, resource saving, and safety and comfort.

The manufacturer goes out of its way to implement socially responsible programs, such as its efforts to plant 500 trees at an elementary school in the city of Angeles in the Philippines in 2017. To date, YTPI has planted more than 40,000 trees in native forests around the company’s grounds, representing a part of Yokohama’s collective aim to plant half a million trees. 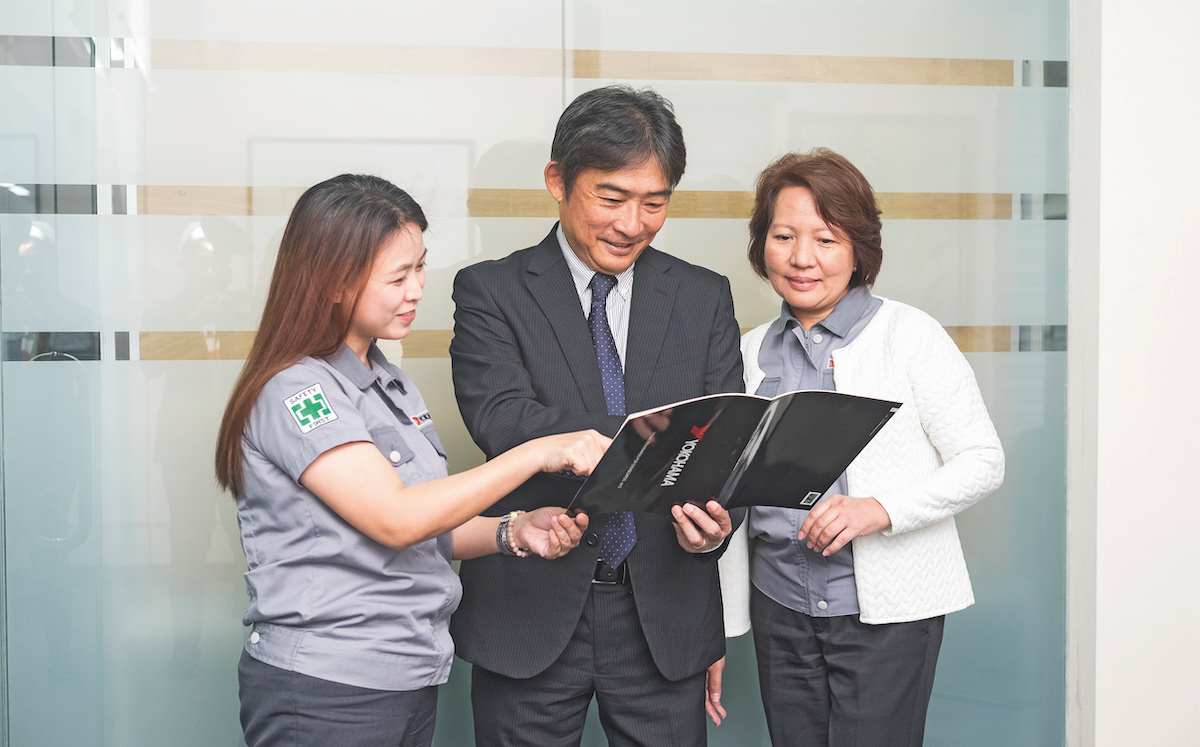 In fact, a total of 10 programs last year were implemented by YTPI in accordance with the UN’s Sustainable Development Goals. Some of these included the support of foster homes for disadvantaged youths, feeding programs for undernourished schoolchildren in Angeles, free medical services for the needy, and the donation of rubbish bins and seedlings to various schools.

It’s no surprise that Hitoshi now drives YTPI’s commitment to giving back to society given his own personal experience with critical illness, during which he emphasises his wife’s support was indispensable.

“I had surgery to remove a large tumour five years ago,” he discloses. “Fortunately, I recovered quickly. The surgery was a success, and my wife supported me immensely during that time. She then followed me to the Philippines when I got this position. My life absolutely changed for the better, thanks to my surgery and my wife.”That positive outlook has no doubt helped Hitoshi envision a bright future for YTPI.

Having already revolutionised the way Yokohama manufactured tyres in Vietnam, he’s aiming to have the same impact in the Philippines.

With the benefit of more than 30 years across the Yokohama network, Hitoshi is arguably the best person for the job and, given the importance he places on “carrying out one’s word”, he’s guaranteed to follow through on his mission to achieve the number one marketshare for YTPI. 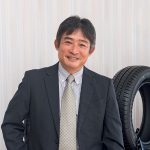