Since its founding in 1957, the Chuan Huat Group has grown from a small business to a group of companies under the name Chuan Huat Resources. While the company’s main business has always been trading and it has found success in manufacturing, it has learned to continuously diversify under Deputy Managing Director Mark Lim.

Mark completed his university studies in the UK and worked there for 10 years. Upon his return to Malaysia, he joined his father’s company Chuan Huat Group. Over time, Mark helped grow the company into a much larger operation that supplied products to hardware and engineering contractors. However, he wanted to diversify the business, since he was concerned that Chuan Huat did not put all its eggs into one basket, especially as the IT revolution was just beginning.

“We put our eggs in different baskets,” says Mark. “It’s important to diversify if we want to continue being successful in our constantly changing landscape.”

“It’s important to diversify if we want to continue being successful in our constantly changing landscape.”

Mark’s decision to enter the floppy disk market was the birth of a completely new business. And since Chuan Huat’s business base was trading, it became the sole distributor of a branded floppy disks, importing and selling them to resellers. Chuan Huat further diversified into this sector and later also into CD manufacturing. It now retails a full range of computer peripherals and accessories, such as printers and printer cartridges, and also has an IT division led by its subsidiary, Pineapple Resources.

The IT division also successfully set up numerous retail outlets throughout Malaysia, becoming one of the biggest IT retail chains in the country.

Under Mark’s leadership, the company has evolved further to become a leading stockist of iron and steel, as well as an importer and exporter of structural steel and other construction materials. The Group also offers value-added services for ‘cut and bend’ reinforcement bars, wire mesh and Esyfence – a welded security fence to support the downstream operation of the industry.These form the backbone of the company’s Steel Service Centre Division.

With increasing activity in the construction sector, the demand for construction-related materials is set to grow.

Mark says since his father’s time as head of the company, Chuan Huat has always believed that close relationships with its partners and valuing its employees are vital to success. “We have established long-term relationships with our suppliers, filled with integrity, trust and loyalty. We believe in looking for long-term partnerships instead of always switching to new suppliers. Once we identify a good supplier, we stay with them and work together to overcome any problem that may arise. This has taken us to where we are today and has allowed us to have amazing support from our suppliers for all our materials,” he says.

“We believe in looking for long-term partnerships instead of always switching to new suppliers.” When Mark’s father passed the business on to him, he took it upon himself to further diversify the business model and expand. Now, he is passing it on to the next generation, who he believes will reform the business model into something different again. Mark is already training his sons, nieces and nephews to lead. The company offers a clear career pathway within its structure, with in-house staff promoted to any new vacancies. This ensures talented employees continue to rise through the ranks, guaranteeing that their loyalty and hard work will be recognised.

“The new generation are the ones that will enable new technologies for the company. They can set up new avenues for our products to sell and enable us to optimise our online presence. So, not only are we efficient in the traditional ways of selling, but we hope to achieve the same success in the digital sphere. Despite growing up in different times, we must allow the next generation to implement the changes they see fit.

“We are witnessing a large disruption in the IT industry, because a good 50 per cent of IT products are already being sold online. And I see this number only exponentially increasing.”

Mark is always on the lookout to diversify, never content to simply stay where he is. To him, comfortably sticking to what he excels in, is never an option. So, when he is asked about the very different businesses that make up Chuan Huat Group, he explains that it’s simply a good policy to diversify.

“Back then, Malaysia was in a bit of a recession, so we decided to move into a new field with its steel service centre. And with that same mentality, we stepped into IT as well,” says Mark. “People often say ‘You were in the steel business and then you went into IT. How did you do that?’ But it’s simple. If there is a new product, we will be always ready to go and give it a try.” 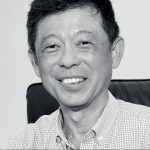