We’re About A Win–Win Outcome Or It’s No Deal: Nick Carthew AME Systems got its start in 1977 as T.C.T with three friends in a two-car garage in the city of Melbourne. Since, the company has come a long way and much has changed; however, its spirit, passion and commitment to quality has remained. “My father, one of the original founders, bought the business outright with his brother Rick in 1992. Then, it had only 25 employees,” says Managing Director Nick Carthew.

“But that’s taken us to where we are today. Currently, revenue is pushing A$80 million, we employ around 400 people here in Ararat, and we also have three factories in South-East Asia in Malaysia, which employs roughly 90 people, and is growing too.” By the end of the calendar year, Nick predicts they’ll probably have 150 people operating out of it. It’s all part of AME’s ambitious growth plan.

“We’re strategically growing into the defence and aviation spaces, supplying Northrop Grumman in the US, Boeing, Bombardier, and a growing list of about 300 customers,” he says.

“With the complex projects we’ve taken on, we’ve moved a lot of the more simplistic, highvolume work to Malaysia, which has given us the benefit of being able to offer our customers faster lead times and reduced costs.”

A manufacturer of quality electrical wiring harnesses and assemblies, the company specialises in customised electrical solutions for heavy transport, military, medical and special-purpose vehicles and machinery. It also offers full-service support from design to delivery and aftermarket sales.

Within the past five or six years, we’ve nearly tripled revenue.

“Pretty much any vehicle you see on the road, on the track or in the sky has our stuff in it,” Nick says. “It’s not really a sexy product; you don’t see it. But if you walk through our plant and see what we build, most people are blown away with the complexity of the products that we manufacture.”

When it comes to what sets AME apart from its competitors, Nick admits that it’s not just one thing. “It might sound a bit arrogant, but there are a multitude of things that set us apart from our competitors,” he says.

“A major part of that comes from our values but, overall, our competitive edge is a list of a lot of things.” For one, the company is selective in who it works with. “There are some customers that we just don’t want to do business with,” he says matter of factly.

“And that’s mainly because they’re pricedriven organisations. That’s not what we’re about. We’re a bespoke business in a high-volume world. We’re about a win–win outcome or it’s no deal.” 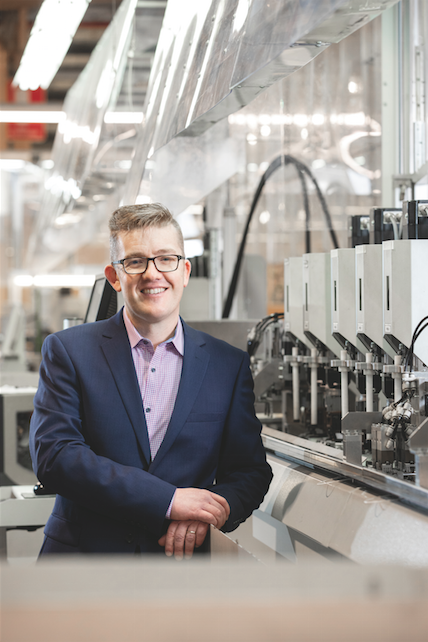 AME is happy to extend its wins to causes it believes in. The company has been unwavering in its support of manufacturing growth and job creation in regional areas, with Victoria in particular a regular recipient. In that state, AME has offered a number of traineeships to local school leavers to provide career opportunities and encourage young people to settle in regional areas.

“Many of our existing senior and leadership managers joined the company this way,” Nick says. “Many families have had three generations represented in the workforce over the years.” AME has long supported local Ararat business and community groups, and this ongoing relationship continues to form the backbone of the company today.

“Annually, we provide more than A$30,000 to more than 100 local organisations and individuals,” Nick says. “We also bolster the town’s economy by A$25 million a year in wages and salaries. This makes a huge impact in a small town.” On a grander scale, AME signed up to Australia’s Pacific Labour Scheme to help address workforce shortages.

“Not only does this program contribute to the economic development of the participating island countries, it helps boost Australia’s economic growth.” Ultimately though, Nick believes AME’s human capital is the biggest differentiator. “Our engineering capacity and experience sets us apart,” he says.

We’re operating as a bespoke business in a high-volume world.

“We have a huge amount of experience – 40 years – in defence, aerospace, space, truck bus, rail and marine applications. People come to us for that experience.” With that in mind, it’s surprising to learn AME isn’t usually the customer’s first choice. “Generally, we’re not the preferred tender at the time,” Nick says.

“We end up winning in the long run. We tend to find that after two or three years, the work comes around to us because customers start to realise the value of what we offer. It’s probably the reason why we’ve had so much success because we’re selling the value of that full-service level, including the humanistic component.”

For AME, culture is key, and Nick says it has been since the company’s inception.“It’s a tough business to run when your volumes are low; you have to have a really savvy team of people,” he says.

“I think it’s what’s made AME so successful We’re a seven-habits organisation, a concept that my father instilled based on Stephen Covey’s model, which empowers our team to make decisions and take action, rather than reacting to events around them. It emphasises the importance of self awareness and gives us a framework that helps our people work together more effectively, which then transposes into strategy accountability.”

This culture is vital as it encourages employees to always have their hands on the pulse of the business. “We need that,” Nick stresses. “Digital systems can’t really run our business because it’s so bespoke and agile. We’re operating as a bespoke business in a high-volume world. So we’re really firm on our corporate values, particularly those around humanistic values and how we treat each other. We have zero tolerance for poor behaviour.”

The company’s passion for culture stems from its desire to keep employees happy, healthy and well. Its manufacturing may be safe and low impact, but there’s always a risk – something AME strives to mitigate. That starts the moment employees begin the onboarding process. They submit to full musculoskeletal testing to find out their personal capabilities. 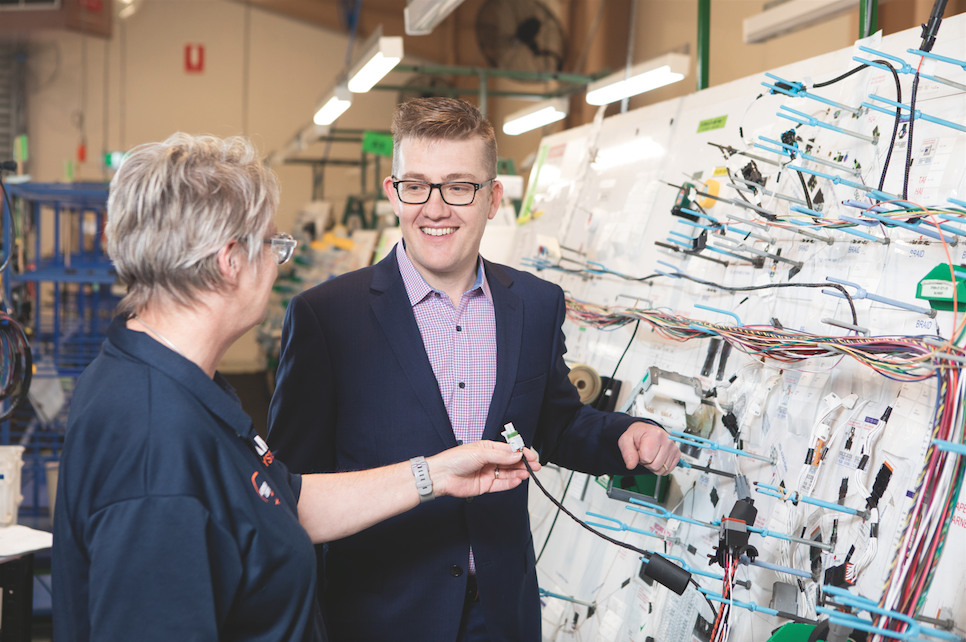 “Our biggest risk is musculoskeletal for repetitive strain-style injuries,” Nick explains. “So when new employees walk through our door, it’s our priority to ensure they work in a physically safe environment where they can go home at the end of the day happier, mentally tough and safe.”

It’s unique the way AME approaches safety in the workplace. The company employs physiotherapists who go around working with people. It also implemented a process called “body break”, which is a set of exercises designed by the physios that’s performed twice per shift and are absolutely compulsory.

“Our employees stop working for a couple of minutes to go through the exercises, which are basically stretches, but they work great in reversing any potential musculoskeletal damage that might be caused by repetitive strain. We’ve had a huge amount of success with this program,” Nick says.

In case of an injury, even if it’s extracurricular, the company makes sure to put the employee in duties that won’t further exacerbate their injury. “Customers who come here often can’t believe it. They’ve never seen anything like what we do anywhere else in the world,” Nick says.

“It’s one of the reasons why we’re winning the work and contracts we are now. It’s not all about price anymore. It’s about that social responsibility that we’ve had since the beginning when my father instilled in his company the seven-habits culture where you treat people the way you’d want to be treated. It’s core to our business.”

And the same goes for the culture in Malaysia. AME ensures that the same values and safety standards are upheld there. The buildings are air conditioned, the machines are guarded, and there’s a proper canteen with hot and cold water.

“We’re the only one in the area doing that,” he says. “But we won’t go into an area and take advantage of anyone.” This ethos has helped AME climb to new heights. It continues to grow, even during a worldwide pandemic. Of course, that wasn’t left to chance; as soon as the leadership team saw the potential magnitude of COVID-19’s wrath on humanity, they took swift action.

“We were very fortunate, leading into the pandemic that we kind of saw what was happening and brought a lot of stock in. It’s the reason why our customers are able to build their products now,” he says. It’s been an adventure, but one Nick has been proud to be a part of. “Our business is ever growing,” he says.

“Within the past five or six years, we’ve nearly tripled revenue. And with that growth comes a lot of complexities. There aren’t too many companies that can pull that off, but we have.”