One of globalisation’s most committed disciples, COSMO CEO Paul DeMand grew up “in one of the toughest cities on the planet: Detroit, Michigan”. After beginning his career working as an engineer in the automotive industry, Paul has since led global industrial companies in the UK, Germany and Hong Kong. He has lived in areas as far afield as Oxford, Tokyo, and Silicon Valley, and worked for companies in the US, Europe and Asia, for bosses of many different nationalities.

“I really enjoy working in the global arena,” he tells The CEO Magazine, and in his role, he spends roughly half his time travelling, celebrating the opportunity to traverse the globe and adopt a universal outlook. “Even though I’m an American and my president wants us to become more nationalistic, I think globalisation is the key in terms of looking at different possibilities for positive solutions for stakeholders.”

Established in 1997, COSMO operates design, prototyping and manufacturing facilities that allow customers to take their products from the ideation phase, through design, and all the way to production under one roof (metaphorically speaking). There are four words that best explain what COSMO does, and what the brand means to its customers: “Soft, solid, smart and secure. We take soft, high-end materials and bond them to something that’s solid: a laptop, your iPad, lipstick cases. Then we typically embed within that some sort of smart solution, whether it be electronics, or reusable packaging. The secure element: customers know that if they deal with COSMO, we’re going to protect them and their intellectual property.”

While the core of COSMO’s business continues to be cutting-edge design and engineering, “I was brought in to broaden the company,” Paul says, in line with a concerted effort being made to expand the company’s customer base. In pursuit of this aim, Paul is building a world-class, global, executive team. “We are working on strategies for expansion into new areas, products, customers, and markets. We’re also going to be building a world-class COSMO campus in China,” he says. The campus project is slated to begin in the first quarter of 2019.

While COSMO’s design and engineering capability sets it apart from its competitors in China, India and Eastern Europe, talent also has something to do with it. The company seeks to attract individuals at the top of their game, and believes it has something, encapsulated in its image and its brand, to offer in return. “Hiring great people and bosses attracts great talent,” Paul notes, “and hiring the best and brightest drives the best performance, going forward.”

Ultimately, Paul says, “we want to be the best in what we do”. The process of uniting employees under this vision “starts with leadership at the top. You really do have to lead by example, and you’ve got to have the right performance-based recognition and reward systems to ensure that everyone’s best interests are aligned.”

“”Leadership is always difficult to define, but you know it when you see it.”

Over his career, Paul has learned a great deal about leadership from “a few great bosses”. He admits, “leadership is always difficult to define, but you know it when you see it. As a person who wants to continuously learn and improve, you emulate some of the things you truly admire in people.”

So, it should come as no surprise that Paul’s vision for COSMO is global. An IPO in the next few years is looking likely, and the company is considering dipping its toe into the world of mergers and acquisitions. Meanwhile, COSMO has plans to extend its reach in design and engineering by establishing more partnerships.

“We currently have design centres in Hong Kong, China and San Francisco. What we’re going to do, step-by-step, for the rest of the world is partner with design studios. Over the next 12–18 months, we’re going to have one in the UK, Germany, Italy and France.”

The future is far-reaching. “We will continue to invest in the best people, facilities, and equipment, and work with the best companies in the world.” 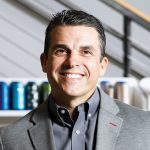