With almost 40,000 staff, Peter Chiu Hui-Chin has his work cut out for him. He’s the CEO of Chinese manufacturing giant Ju Teng, which makes laptop shells and other electronics cases for companies around the world.

Peter has the kind of impressive background you might expect of a listed company’s chief. He holds a master’s degree in industrial engineering from the National Taipei University of Technology and an executive MBA in finance from National Taiwan University.
Before joining Ju Teng in 2017, Peter worked in the notebook computer and electronic production business for 30 years, holding roles at well-known companies such as Motorola and Philips.

Ju Teng was founded in 2000 by Li-Yen Cheng, Li-Yu Cheng and Tsai-Chin Horng and, today, is headquartered in Hong Kong. With factories spread across eastern and southern China and Taiwan, the company is involved in mould development, plastic injection, metal stamping, surface coating and assembly activities. Its customers include many of the world’s leading laptop manufacturers.

When Peter arrived at Ju Teng, he immediately got to work reorganising the structure of the company, while focusing on building up talent. He’s also diversified Ju Teng’s product range and taken steps to ensure the company’s factories are geared up and ready for Industry 4.0 – the current trend of automation and data exchange in manufacturing technologies. And since Peter arrived, revenues and profits have surged.

While things appear to be headed in the right direction, Peter knows that uncertain times lie ahead. The US–China trade war and a slowdown in the global economy could both have a major impact on the company. Of the trade war, Peter says: “Customers are considering a new manufacturing location, which will force Ju Teng to rethink its global operation and manufacturing locations. It’s hard to control, manage or predict what will happen there.”

Peter is aware that customer expectations are also high when it comes to laptops. “In the notebook business, customers are always asking for thinner, lighter, sexier products,” he says. “Providing them with the most up-to-date device at a competitive cost is our never-ending pursuit.” Ju Teng is well positioned to maintain its place as one of the world’s leading laptop case manufacturers. This is largely down to the fact that the company is making continuous investments in research and development, Peter says.

There’s a lot of money being spent on developing cases suitable for 5G products. These fifth-generation products are the next step in wireless connectivity, offering faster speeds and more reliable connections on smartphones and other devices. Ju Teng is developing a customised plastic material for the 5G signal, as well as several other new production processes.

It is also thinking of how it can better serve other industries with its cases, including the automobile industry and the healthcare industry.

“Due to our flat structure and organisational efficiency, we can quickly make optimal adjustments in response to rapid market changes,” says Peter.
When he describes the principles driving his company, Peter talks of customer satisfaction, integrity, innovation, passion and close team work. He and his team always aim to pursue the truth, and seek truth from facts.

“People are the company’s most valuable asset.”

While machines are used across Ju Teng, Peter is a strong believer in people. “Everything starts with people. People are the company’s most valuable asset,” he says, adding that all the good results of innovations come from the continuous efforts of people.

His wife, a teacher and charity worker, often reminds him that “the definition of success is how many people you have helped.” 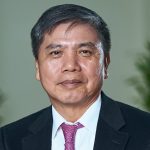