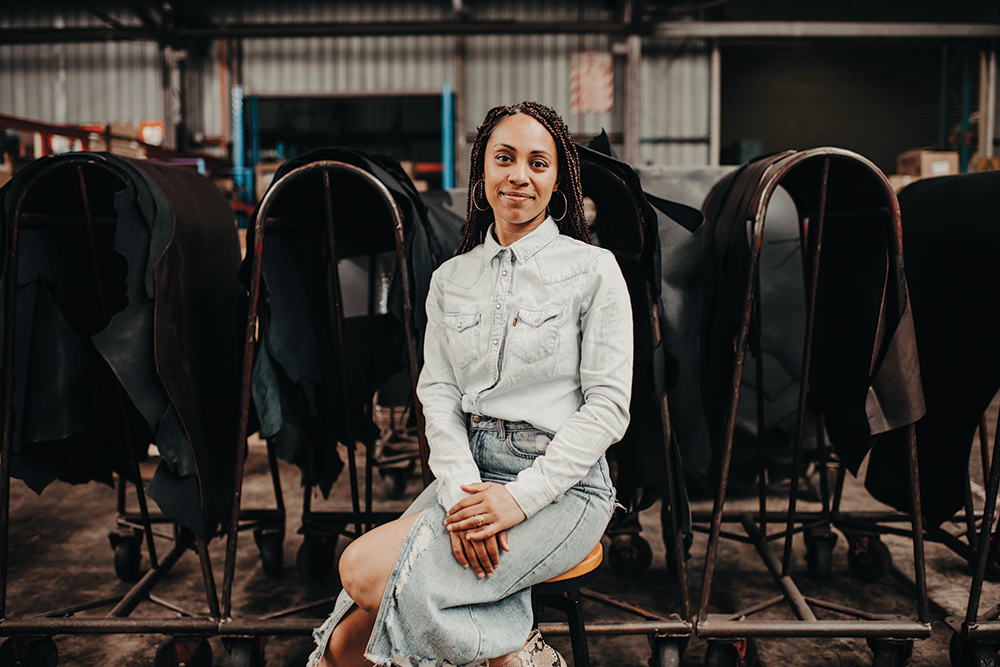 By the time Ken Van Der Water transformed his beloved hobby of crafting leather belts into a micro business, he’d already endured years of struggle. Originally from South Africa, Ken and his family had fled to Australia to escape apartheid. He arrived with a recognised trade as a leather worker and soon set up a small shop in his Sydney backyard.

“My dad had an old-school mentality and didn’t take extended risks,” says his daughter Tanya, now CEO of what has become Buckaroo Leatherworks. “He was too busy trying to survive and get things moving in a new country with a young family.” When Tanya joined the family business at the age of 18 in 2002, it had become a team of four.

“We did everything ourselves,” she says. “Dad really struggled for a long time. It’s unfortunate that he isn’t here today to see the success we’ve achieved.” In the late 90s, two Maori tradies approached Ken with a very specific brief: a supportive belt made from black leather.

“They had sore backs,” Tanya says. “It wasn’t something my dad did a lot of.” Nevertheless, the elder Van Der Water met the brief with a belt that featured interchangeable pouches. “That became our Signature Tradesman’s Back Support Tool Belt,” she says. “It’s actually a bit of a mouthful. I think we might need to change the name.”

What the belt lacked in marketing pizzazz, it made up for in sheer practicality. “The defining factor is that you have the same base belt as any other tradesperson but, depending on your trade, you can kit it up differently with additional attachments,” Tanya says.

Despite the innovative effort, the belt wasn’t an overnight success. “We spent years travelling around to building sites trying to give the belts away.” The tradie community was used to the traditional tool belt: ragged, apron-esque, bad for backs.

We’re really honest about what we’re worth, and I think that’s given us a lot of competitive strength.

“Dad’s design blew that out of the water; he brought an aesthetic to the industry that wasn’t there before,” Tanya says. “Over time we changed their perception of what it means to carry tools in a comfortable and good-looking way.”

“As an Australian manufacturer, you can’t enter a market competing on price. You’ll fail. So whenever we talk about price, we’re really honest about what we’re worth, and I think that’s given us a lot of competitive strength.”

Running a legacy business hasn’t been easy for Tanya, who has long felt her father’s shadow over Buckaroo’s operations. “You automatically assume the shoes of the person that walked before you, and it took me a long time to realise that wouldn’t be possible for me,” she says.

“As a woman, I’m not going to jump into a man’s shoes, but I thought that’s what I needed to do.” These initial efforts “failed miserably”. “I was trying to do and be everything I wasn’t capable of being.” Instead, Tanya reinvented the business through a reinvention of herself. “I had to surround myself with people who knew what they were doing and learn from them.”

It was a hard lesson to learn, but at the same time Tanya feels it was a relief: “I immediately started a new foundation for the business that focused on what we did best. I had a focused desire to take it to a place I felt it could go.”

Buckaroo, today, is a multi-award-winning company doing big business overseas. “We compete in the US with big industry names like Makita, DeWalt and Milwaukee,” Tanya says.

“And we just dominate in that arena because we’ve chosen to be a specialist niche producer while they primarily make power tools.” The success is a combination of both Ken’s and Tanya’s visions – his of a niche tool belt forged in a dying trade, hers of an audience beyond the backyard shed.

“Dad once told me, ‘You need to stop going around thinking that you know everything,’” she shares. “I carry it with me even today because I don’t want anyone I work with to think I’m the type of boss that wants to have the final answer to everything.”

Instead, she says, Buckaroo’s growth is driven by the ideas of the entire team, small or big. “So what was once a put-down was probably the best piece of advice.”