The world is changing fast. Not only has the pandemic drastically altered the way we do business, perhaps forever, but the demands of both consumers and clients have evolved almost beyond recognition. Gone are the days when a garment manufacturer simply had to produce clothing.

Now, they are increasingly considered a one-stop shop and expected to deliver an end-to-end solution. No wonder then that Epic Group Executive Chairman Ranjan Mahtani is determined to turn Epic Group into a “supplier for the future”.

“A supplier for the future is not just a guy who stitches garments and delivers on time,” Ranjan tells The CEO Magazine. “It’s the ability to do everything. It’s design of the highest level, co-creation, bringing sustainability which is a very important road map for all our customers, right?

“At the heart of everything we do lies our core philosophy of the ‘relentless pursuit of better’. We believe in challenging ourselves and getting better each and every day because we believe that tomorrow’s better beats yesterday’s best.”

We believe in challenging ourselves and getting better each and every day because we believe that tomorrow’s better beats yesterday’s best.

It doesn’t end there either, he stresses. There is also diversification of product and taking on the customer’s entire workload.

It sounds like a big ask but, incredibly, Ranjan already has his customers covered on most, if not all, of these fronts. These latest changes he has put in place build on all the significant shifts in business since it was founded in 1971, when it was more of a trading company than a manufacturer.

“The goal is to be very agile and nimble,” he asserts. “We are going to achieve that by having factories in straight lines – proper industrial buildings where material coming in and going out can be spotted very easily because everything is digitised. All of the movement is captured by QR coding and Kanban workflow management.”

These “micro factories” are designed to better cater to today’s hyperconnected online world we now find ourselves in, allowing Epic Group to “cut in the morning and ship in the evening”. “Every efficiency of the worker is captured through what we call a smart sewing system,” Ranjan says. “Every component they produce, they have to push a red button. The moment they push the red button, the enterprise resource planning system gets an update.” 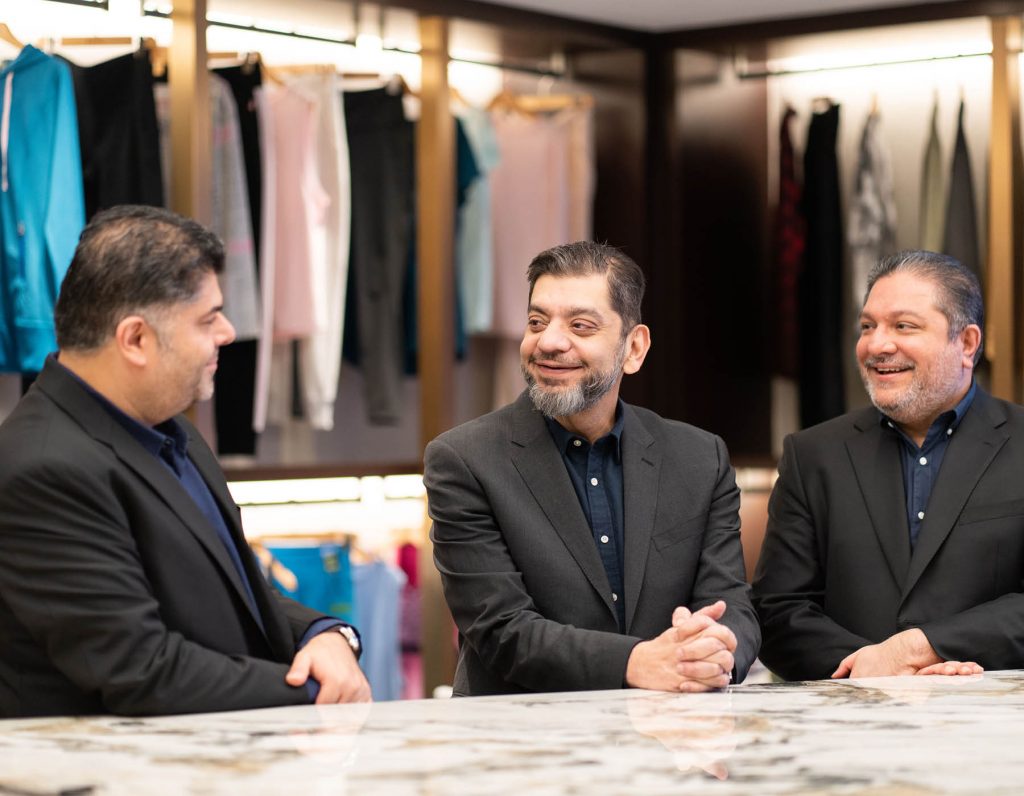 That’s not the only way Epic Group is doing things differently. The company has now placed a washing machine at the end of the sewing line – an innovation Ranjan believes is a world first. “The idea is that when a garment comes out of stitching, it goes into this new-age washing machine that is connected with an e-flow, which recycles water for 30 days,” he explains. “It’s actually simple more than high-tech. The key features are digitisation and the latest machinery.”

Additionally, Epic Group now uses dry-head machines, which don’t use oil, eliminating the annoying problem of oil stains on the garments. The machines also automatically send an SMS to the mechanic when they break down. “We’re very excited about small features like that, which have huge impacts,” Ranjan says.

Every efficiency of the worker is captured through what we call a smart sewing system.

Epic Group now offers its customers a marketing service that Ranjan anticipates will be a huge growth generator. “We are creating brands for our customers,” he reveals. “Some come through acquisition, some come through self-creation, but we’re actually taking brands and launching them with our existing customers.”

Among its achievements to date are an exclusive online collaboration with Walmart along with selected athleisure brands for club stores. Not only does Epic Group oversee the manufacture of the garments, but it also creates an exclusive brand which it then promotes through branding and marketing, including on social media channels.

“We are actually venturing into an area and partnering with our customers so that we’re not a traditional manufacturer anymore,” Ranjan expands. “We’re bringing brands to the table, actually storing goods in the US, and the next challenge that we’re discussing is how we can deliver direct to the consumer for them, which is quite a revolution for a factory.”

Ensuring it does this without competing or conflicting with its existing customers is vital, as Epic Group is fiercely protective of its relationships with customers like Walmart, Amazon and Uniqlo. “These partnerships are phenomenal – these are the most successful companies in the world, even after COVID-19, so we want to leverage these relationships.” Epic Group has also created exclusive tie-ups with world-class factories in different countries like Vietnam, Egypt, Pakistan and Cambodia to exclusively take on its product diversification. “We have such strong ties with our customers that they allow us to do that,” Ranjan reflects. “So that’s going to be another area of growth for us and, because of that growth, we have diversified our product.”

Epic Group’s people play a huge role in its ongoing growth, therefore the Group heavily invests in them. “We’re offering extensive training, whether it’s at worker level or whether it’s getting the best trainers for creating leadership in the company,” Ranjan shares. It also offers the Global Women Economic Empowerment Initiative; a program that focuses on workers’ health, rights and responsibilities. In addition, a carefully designed “pay for performance” program acts like a “mini environmental, social and governance scheme” to help create a foundation for its future.

Another major investment is helping to take Epic Group to the next level, Ranjan continues. “We are putting a lot of money in our people and also updating, after 10 years, a new fully digitised ERP for the company,” he says. “So, between the people and the ERP, while these are not profit centres, I believe that they will enhance our performance drastically, which is why I describe them as avenues for growth.”

We have attracted people from companies like Adidas and Gap, who are now running various aspects of our business.

From being a private company run by Ranjan and his business partners, Epic Group has, over the past two-and-a-half years, become a predominantly professional organisation whose people have valuable experience working for some of the world’s biggest clothing names. “We have attracted people from companies like Adidas and Gap, who are now running various aspects of our business,” he says. “The idea is to create a think tank. There are some key people from outside the industry as well as fresh graduates from reputable schools that bring in fresh ideas and diversity of thought.”

Sustainability is a huge focus, with the company continuing to make “mega investments” for the benefit of the environment in areas such as water reduction, “bringing in the best possible” effluent treatment plants, buying ozone washing machines and transitioning into organic and recycled fabrics.

Technology plays a big role in this while also delivering valuable cost efficiencies. “Simple things like the washing machine sending the SMS to the mechanic saves a lot of time on the workflow – that’s technology,” Ranjan stresses. The investment in a fully digitised ERP is also a sign of Epic Group’s approach to tech. “It’s fully integrated using different modules so that we are able to watch everything from A–Z through automatic triggers coming to us. Anything that is not on track, the system will send us an email, so we don’t have to focus on what’s going right, but rather on what’s going wrong.”

Ultimately, placing the customer front and centre of everything Epic Group does is integral to its strategy going forward. By being proactive and pre-empting any issues for its customers, Ranjan is convinced it can become a better supplier.

“We want them to feel that they have a place where the are comfortable, that we can do everything for them so that they can focus on their business versus having to worry about their deliveries being on time,” he says. “At Epic Group, we are proactive. We don’t believe in excuses; we only believe in solutions.”

Exciting strides have been made since we spoke to Ranjan in May last year. The pandemic’s uncertainty has not quelled his ambitious vision. “We have made a lot of effort,” he says. “I think we have done a good job so far. I’m sure we’ll do some things right and some things wrong. But the whole idea is to build what we call factories for the future and that will help us in our organic growth.”

“Our relationship with Epic Group began in 2019. It has grown from strength to strength each year based on mutual trust and comfort. We look forward to further nurturing our relationship and remain a key partner in its journey towards greater success.” Habib Bank Zurich (Hong Kong) Limited
“Epic is our esteemed partner of many years in the sustainable journey. Their insightful accomplishments inspire creativity and bring passion to our work. We have been working together relentlessly for a better and greener future.” Kutubuddin Ahmed, Chairman, Envoy Textiles
“We have been honoured to partner with Ranjan and his entire team at Epic Group to maximise value in the apparel supply chain and collectively provide exceptional service to our customers and partners. The future is bright!” Michael Teitelbaum, CEO, r-pac International
“Juki is proud of its long business relationship with Epic Group. We share Ranjan’s relentless drive for continuous improvement to the process, people and planet, as well as a commitment and effort on sustainability and values on technological innovation.” Juki Singapore 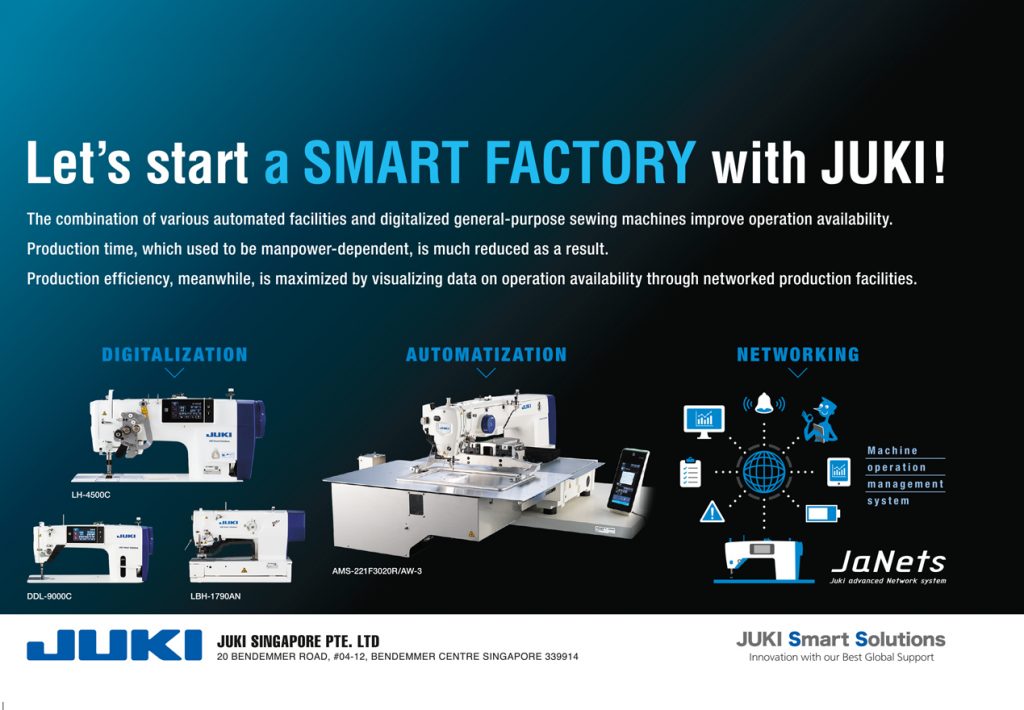