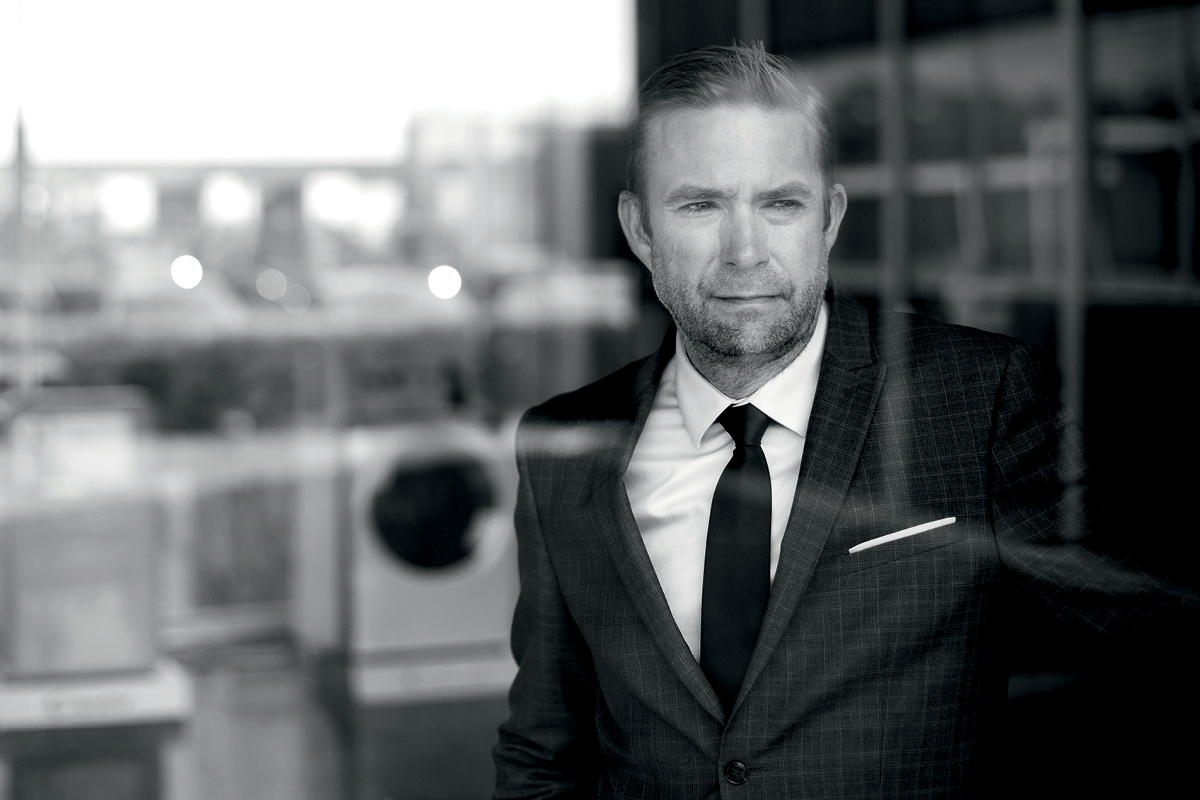 In 1995, Bill Gates published The Road Ahead, in which he accurately predicted how pervasive technology would become in the future. More than 20 years later, we are now living in the future referenced in the book, and Gates has made his US$127 million (€114 million) massive mansion in Medina, Washington, an exemplar of his predictions.

Gates has guaranteed himself a warm welcome in every room with light and temperature settings that automatically adjust to his preferences as he enters. His favourite music follows him from room to room, courtesy of the speakers hidden in the walls, as do his favourite paintings, thanks to the US$80,000 (€72,000) in computer screens situated around the house.

His favourite tree on the grounds, a 40-year-old maple that grows near the driveway, will never want for water because it’s monitored by a computer and gets a spritz whenever it gets even a little parched.

Technology’s omnipresence today is such that it’s moving out of devices and computers into everyday objects. We even have a name for the phenomenon now: the Internet of Things (IoT). What it promises is a version of Bill Gates’ smart home for everyone.

In fact, according to Yannick Fierling, this is already a reality for the 58 million homeowners in China who are customers of Chinese consumer electronics company Haier. “The firm is leading the IoT revolution in China,” he claims.

And as the CEO of Haier’s European division, he hopes to replicate the same success in the market he manages. Haier has already made some headway into bringing connected appliances to Europe, having completed the acquisition of Italian appliance manufacturer Candy early this year.

“Candy is a leader in the European market for smart appliances, currently with more than one million connected users in the continent,” Yannick reveals. “We are convinced that we are in a great position to expand further into Europe in the coming years.” 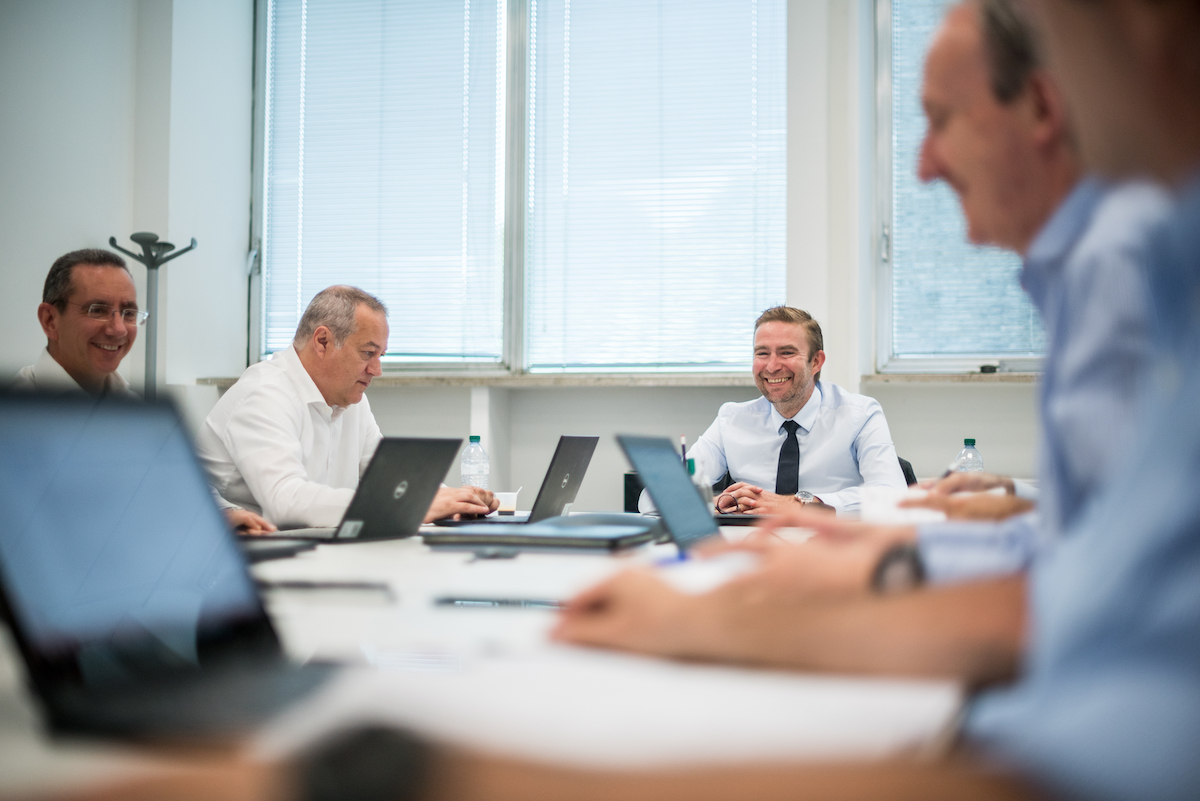 For Yannick, the successful development of IoT will add more than just numbers to Haier’s bottom line. “What I like about IoT is that it gives real added value for the end consumer. It allows us to offer tailor-made solutions to them, giving them a lot of liberty and freedom to design the exact products they wish to have,” he enthuses.

“The environment in Europe is much more competitive than in other markets, and there has been a tremendous move in the footprint of businesses from Western to Eastern Europe. This is something I always emphasise to myself and to the company: we need to offer different solutions to the end consumers here,” he continues.

“We are not interested in building basic refrigerators. Look at the Haier refrigerators of today; they come in many unique finishes and carry a lot of great innovations in food preservation. We offer the widest range in terms of height, width, depth, finishes, versatility and features.”

The Casarte F+ refrigerator unveiled by the firm last year, for example, features technology that regulates the proportion of nitrogen and oxygen in the fridge, slowing down the metabolism of the cells in vegetables and effectively delaying the oxidation that begins in the roots to keep food fresh for longer.

To convey to consumers the firm’s commitment to making exceptional products, Yannick has put his entire trust in Haier’s sales team.

The company runs on a management mode put forward by Haier Group’s CEO, Zhang Ruimin, called ren dan he yi. ‘Ren’ refers to the people, or the company’s employees. ‘Dan’ means user value; Ruimin uses the word to refer to the end consumer. ‘He yi’ is the integration of employee value realisation and user value created. The phrase thus means the employees and consumers meeting as one.

Yannick explains how the theory is put into practice: “We focus on empowering our customer-facing employees – this means giving power to our salespeople who are speaking and listening to our end consumers, giving them the freedom to innovate, to understand the customer, to be agile, and to provide solutions that are different and customised for each end user. 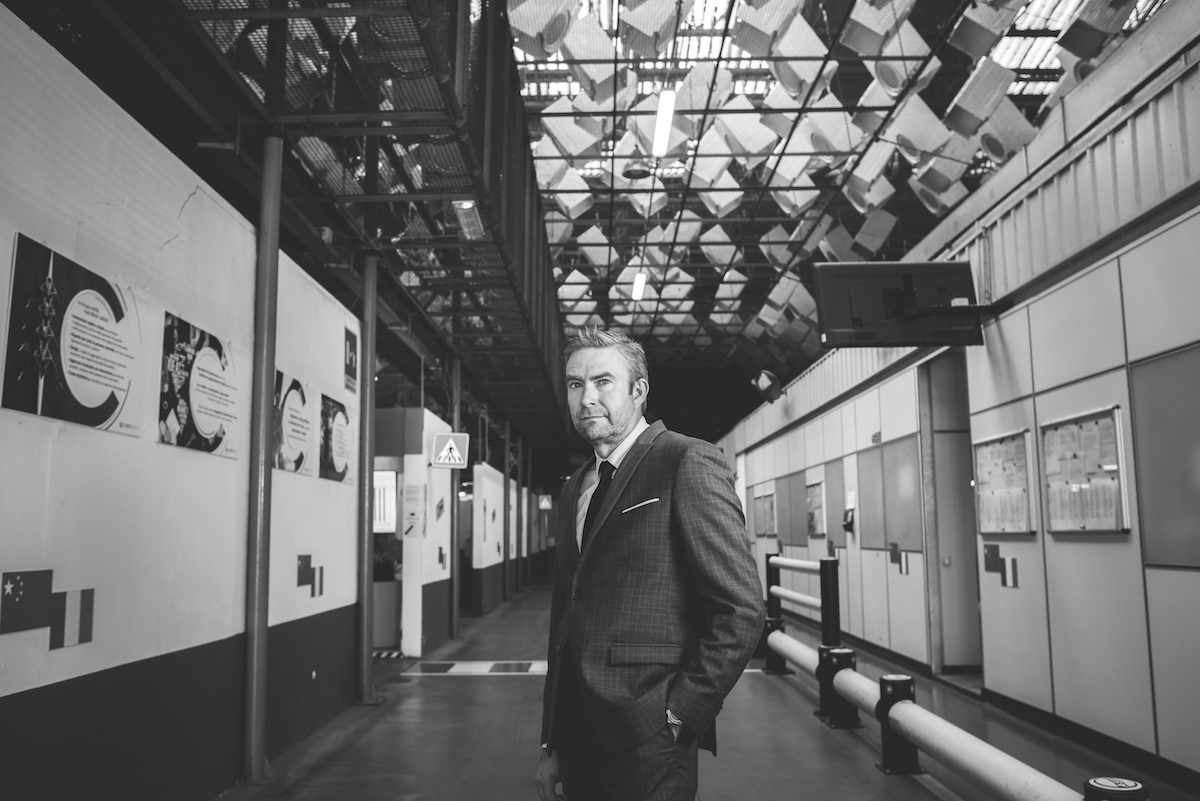 “I think that every single person in the company is capable of being his or her own CEO. In fact, Haier is run like it is made up of many micro enterprises. We want to give our employees control and relieve control from the top management.”

For IoT to really take off in Europe, however, he believes that some things have to change, and they are the strict privacy laws – in particular the recent implementation of the GDPR – in the EU countries. “There are many barriers we have to overcome in order to leverage what we have done in China, here,” he attests.

But it’s an obstacle he believes Haier is well equipped to overcome, especially now that it has Candy on board. He shares: “When acquiring a company, it’s very important to understand how the two companies will work together – whether both will reap benefits in terms of products, brand image or increased footprint. It is also important that the two companies’ cultures fit well together.”

For Haier and Candy, their partnership has definitely benefited their product lines. Haier’s market share for refrigerators is huge – almost 25% worldwide. “One out of four refrigerators worldwide is by Haier,” Yannick points out proudly.

Candy, on the other hand, makes no refrigerators but is a trend leader in cooking appliances, a segment in which Haier’s global market share is only in fifth place. “Now that the two brands are partners, Candy can leverage on Haier’s strong portfolio in refrigeration,” Yannick explains.

“Many global trends for built-in kitchens and appliances are born in Europe. Candy’s know-how in this product category will benefit our customers worldwide.”

In addition, the partnership has given both firms a bigger global footprint than they could have achieved separately in a short time. Candy has production facilities in Turkey, France, Italy, Russia and China.

Its dryer production facility in Turkey makes 600,000 machines yearly, while two million washing machines roll off the production lines annually at one of its factories in China.

Including Candy’s locations, the Haier Group with all its subsidies has a footprint of 10 R&D centres, 25 industrial parks, 122 manufacturing plants and 106 marketing centres around the world.

“Having these global locations allows us to get closer to the markets we are in,” says Yannick. It also fits into Haier’s ‘zero distance’ vision, which describes the proximity the firm wishes to attain to its end consumer. “The two companies are almost a perfect match,” he enthuses.

“Having these global locations allows us to get closer to the markets we are in.”

The partnership may have significantly expanded the firm’s footprint and product portfolio, but Haier is not content with resting on its laurels. “We have always been very open with our developments. We are not exclusive,” Yannick shares. “For our smart appliances, Haier is collaborating with all technology leaders touching this field.”

He described an innovative air conditioner the firm worked on in 2017, which also doubled as an air purifier. “Rather than being secretive about what we were making, we opened up about the entire development process on the internet and sought opinions and feedback from our end consumers from day one,” he says.

“We want to always be social with our customers so that they know we are trying to be close to them and offer them solutions that are different,” Yannick explains. “We are not overly concerned about intellectual property. To us, it’s more important to create a great product that is designed to serve our customers and to help them express their own identity.”

Today, Haier Group is a Fortune 500 company that registered a global turnover of €34.8 billion last year. But it hasn’t always been this way, and it has taken the firm 35 years to get to where it is today.

Haier Group’s journey began In 1984, when a 35-year-old Zhang Ruimin took over the struggling Qingdao General Refrigerator Factory. The firm was struggling with a loss of around €192,000. Employees were not receiving any bonuses and morale among staff was low. By then, the firm had already rotated through three managing directors. There was little faith that Ruimin would succeed where his predecessors had failed and turn the company around.

Under Ruimin’s leadership, the firm made headlines a year later for a controversial reason. After receiving letters from customers complaining about the poor quality of his firm’s products and finding a fifth of the fridges in the inventory faulty, Ruimin ordered his employees to destroy 76 refrigerators with a sledgehammer. The incident received public attention because it was then unheard of for a firm to destroy brand new goods, which could each be sold at a price that was equivalent to two years’ wages for an employee.

In fact, bad quality was so synonymous with Chinese products that consumers had learned to take faulty brand new purchases in stride. Instead of returning the goods, they preferred to fix them at third-party businesses, feeding a thriving repair industry. Ruimin’s dramatic action of destroying the faulty fridges sent a message to the public that his was a company that would only sell products that worked.

The obsession with quality paid off in 1988, when Haier took the gold medal in China’s National Refrigerators Appraisal. Haier had made its mark.

It was no longer a faltering company and had gained a reputation among consumers as a reliable brand. Consumers continued to purchase Haier refrigerators even after the firm raised the prices of its products by 12%.

Perhaps the most significant milestone in Haier Group’s history was its acquisition of General Electric (GE) in 2016. The buyout was a major triumph for Haier given the two firms’ tumultuous history. They first came into contact with each other in 1992, when GE was looking for a contract manufacturer in China. When negotiations fell through, the American giant had threatened that it was going to enter the Chinese market nonetheless, compete vigorously and eventually ruin Haier. Ruimin had boldly replied with a quote by Franklin Roosevelt: “The only thing we have to fear is fear itself.”

Haier drummed up anticipation for the smart homes we’ll likely all be living in in the near future with a model home at the Berlin Exhibition Centre last year.

In the model kitchen, the XCook refrigerator revealed the origin and shelf life of a carrot after a RFID code on the vegetable’s packaging was scanned in the fridge’s camera. A screen on the XCook also connected the user to AmazonFresh, where more food could be purchased if necessary.

In the living room, the TV was showcased as more than just a piece of entertainment equipment. Instead, it doubled as the main control panel for the house, where security information could be viewed and appliances such as the air conditioner and floor-cleaning robot could be switched on.

Smart appliances could be found in every part of the model home. The washing machine in the laundry detected the lack of laundry detergent and prompted for more to be purchased on Amazon; the smart mirror in the bedroom gave users outfit suggestions based on their input of the day’s activities followed by a virtual try-on session, before directing them to the websites where the clothes could be purchased.

The model home epitomised the type of IoT-enhanced lifestyle we can all expect in the near future. Yannick expresses excitement about the changes to come, saying: “Without a doubt, IoT is the future for home appliances and homes in general in the coming years.” 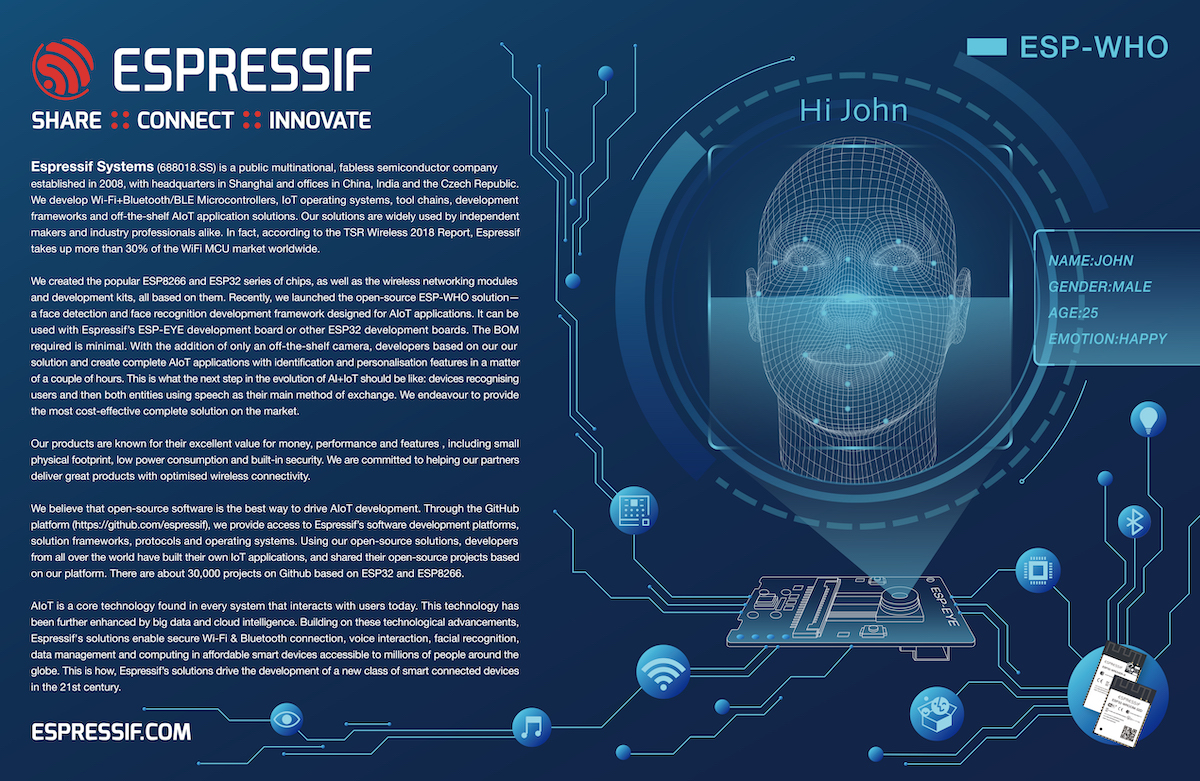 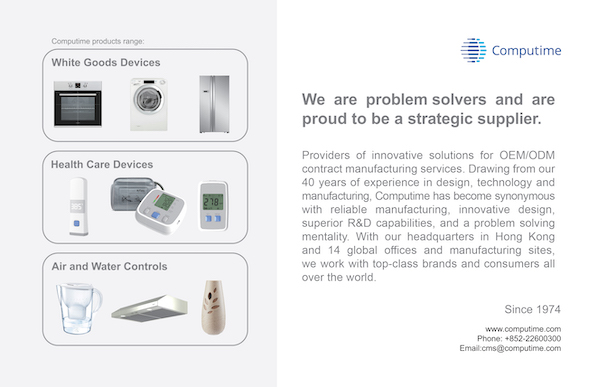