By The Book: Dan Ruffino 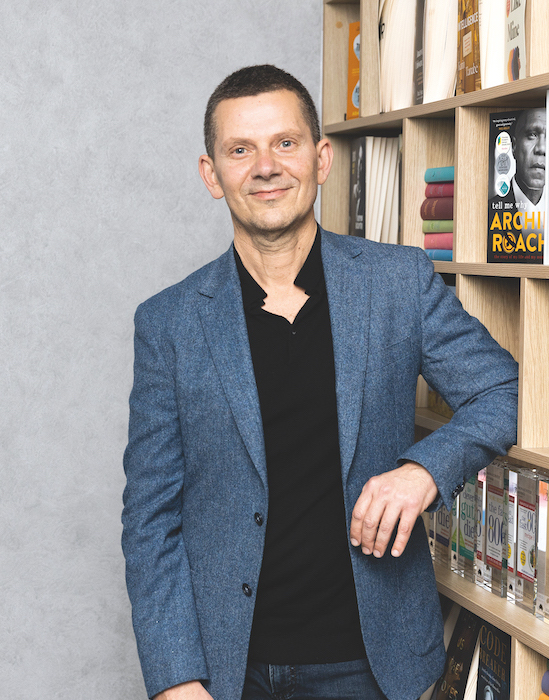 The death of the book has been ceaselessly heralded for years now. Those who believe the printed page has had it too good for too long have been busy writing the book’s obituary and digging a hole ready to fill with dust jackets, bookmarks and other standards of bibliophilia. 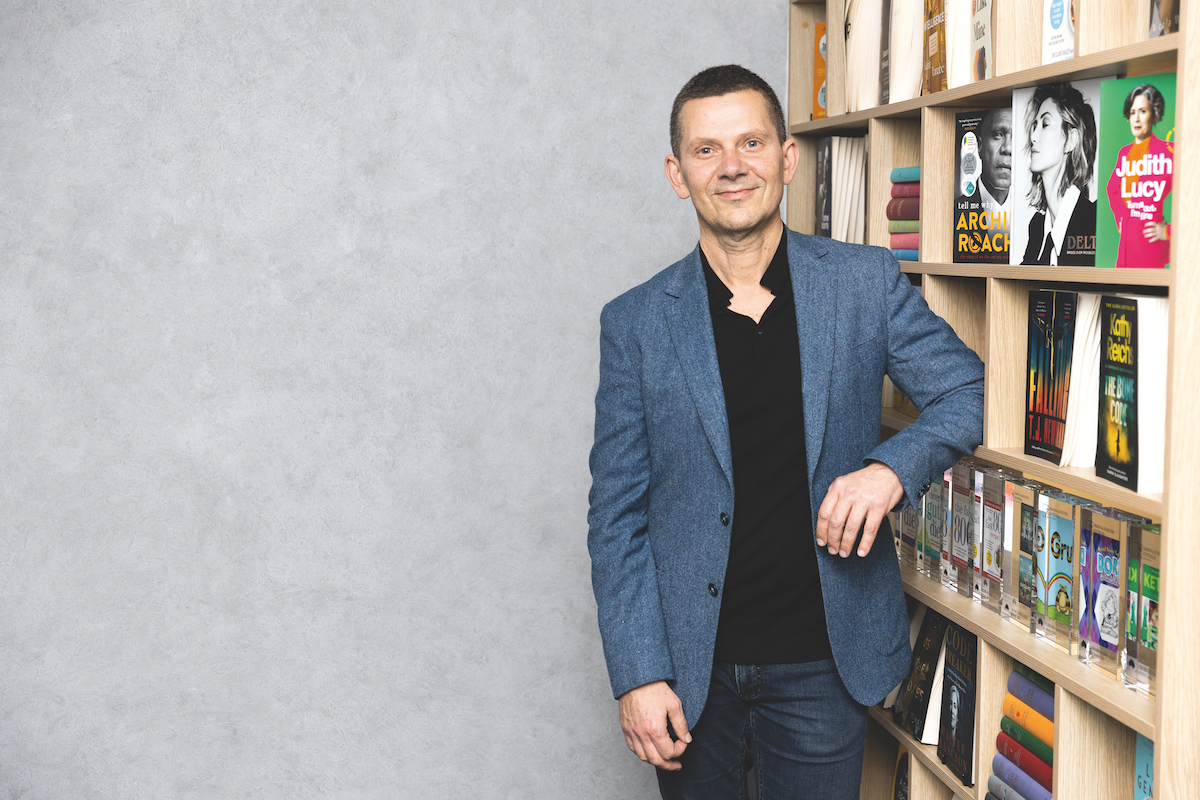 The longer the book persists, the bigger the hole, and ever louder grow the cries for blood. At this point, it’s a very big hole indeed. It’s also a very empty one, because as was recently revealed during the COVID-19 pandemic, books are very much alive.

Trapped in a limbo between the print and digital realms, books remain a global pastime. Far from obsolete, the book is still an evergreen escape that doesn’t need a charger, an audience or even good weather.

It also remains a multibillion-dollar industry and a viable career option, even this deep into the century that so many thought would bring about its end. Just ask Dan Ruffino, Managing Director of Simon & Schuster Australia, who explains the publishing industry is one of ebb and flow.

“It’s changed enormously in the 30-plus years I’ve been in it,’ he says. “We’ve now got ebooks and audiobooks. We have lost some bricks-and-mortar retailers such as Borders and Angus & Robertson, but we’ve gained online retailers like Booktopia and Amazon. We’ve seen massive growth in locally published books and the book departments of discount department stores like Big W, Kmart and Target.”

Australian independent publishers have also grown, Dan reveals, despite the backdrop of multinational publisher mergers and acquisitions. Much like our reading tastes, the publishing industry never stops changing.

What hasn’t changed, however, is the book itself. The hard heart of the ever-evolving publishing industry, books – and the experience they uniquely offer – are a constant, and Dan believes they aren’t going anywhere anytime soon. “I think we can all agree we spend more than enough time with screens, so a physical book is a much-needed break from that,” he says. “It provides portability, intimacy and a distraction-free experience a digital option just can’t match.”

Additionally, some genres of publishing don’t transfer quite as easily to a digital product, he explains. “Children’s books, illustrated reference guides and coffee table books just aren’t the same in a digital format,” he points out. “And at the moment, children’s books have never been stronger.”

And he should know. A lifetime denizen of the industry, Dan has worked with publishing giants like Pan Macmillan and Penguin Books in sales, publicity, marketing and business development roles. “I fell into the publishing industry at age 19,” he recalls. “I had to abandon my plans to study journalism and dreams of becoming a newsreader.”

Career progression gradually came about through what Dan describes as a series of “dumb questions”. “If you don’t ask, you don’t get,” he shares.

By the time the position at Simon & Schuster came up in early 2015, he was working as an advertising consultant. “I knew the UK Publisher and CEO International at Simon & Schuster from my days as Jackie Collins’ publicist,” he shares. “So I wrote to him directly, wondering whether he would consider me for the Australian role.”

The move worked. Dan was asked to take charge of the publishing giant’s Australian arm, where he instantly saw the potential in what appeared to be a modestly sized company.

“It was very small in comparison to its US and UK counterparts,” Dan says. “I asked the then-US CEO whether the Australian business was small by instruction. She said, ‘No, grow the damned thing!’ ”

It was all he needed to hear. “I was attracted to the challenge of setting a strategy to grow the brand. Being the size it was, it was practically a blank slate. The most obvious thing to do was bolt on quick revenue by adopting the successful distribution client business strategies in place in the US and the UK.”

The strategy, which offered sales and distribution in return for a commission of other publishers’ books, allowed Dan to add more sales heads, thus providing an opportunity to further invest in local publishing. “That was only a tiny fraction of our sales at the time,” he admits. “But the potential for growth was there.”

I think we can all agree we spend more than enough time with screens, so a physical book is a much-needed break from that.

The goal was to have a broad line-up of books to sell in every available channel and specialist market across Australia and New Zealand. “We had to be less reliant, as we were at the time, on one particular market segment,” he reflects. “We had to have a wider pool of revenue sources.”

The company also needed a hit. At the time, Simon & Schuster hadn’t had a number one bestseller since 2007. The publisher was also dogged by skewed perceptions within the literary community, a problem Dan immediately worked to change. “That could only be done one book at a time,” he says. “We had to be patient and stay focused on the prize. There were some painful personnel decisions to make along the way too.”

That patience has paid off. Since Dan became Managing Director, the company has enjoyed number one bestsellers on several occasions with different authors and books. The publisher has also been recognised as the fastest growing within Australia. “We’re always evolving. We’re not inflexible, and we remain open-minded about better ways of doing things,” he explains.

Simon & Schuster Australia’s biggest advantage has turned out to be the small size that had initially piqued Dan’s interest. “We have the strength of being part of a big multinational, but thanks to our size, we can act like a small-to-medium-size independent.”

The publisher enjoys the support of local partners and suppliers such as mind body and spirit publisher Rockpool and international manga giant, Viz Media. “Griffin Press does the bulk of our local printing in Adelaide while HarperCollins, a competitor, does our warehousing, shipping and credit collection,” he adds.

The strength of this network has made it easier to face the kind of challenges that can arise in an industry as innovative as publishing. The rise of audiobooks in recent years is a good example. “It’s been both a challenge and an opportunity,” Dan concedes. “We’ve had to build the infrastructure required to produce audiobooks, learn new processes, understand the market and make sure that we don’t over-invest, but on the other hand, we’re gaining back precious reading minutes from an increasingly time-poor and distracted population.” This kind of agility in the face of adversity is something that Dan hopes to refine in the years to come. “We want to get a little bigger so our second five-year plan is now in full swing,” he says. “We’ve made significant investments in commissioning talent so a big focus will be growing our sales of locally published books. We have some exciting acquisitions coming through over the next two years.”

It’s an environment that provides aspiring authors with a much better chance of getting published than ever before, according to Dan. “There are more local publishers than ever and most have ambitious plans to grow,” he reveals. “But at the same time, it’s never been more competitive and the standards have never been higher. If an author has the right champions for their work and, above all, the talent and tenacity, however, there’s a chance.”

Even though physical bookshops are facing many challenges, Dan believes that there’s still an important place for them in the future. “Nothing can match an experienced bookseller putting the right book into your hand after a conversation about your tastes and preferences,” he asserts. “There’s no better place to meet other authors and readers, or to find inspiration and help for all of life’s challenges, big and small. And so, I’m extremely optimistic about the role and future of the bookshop.”

We’re format agnostic. We don’t care how you consume our content, just that you do.

However you read – page, screen or speaker – it matters not to today’s publishing industry. “We’re format agnostic,” Dan maintains. “We don’t care how you consume our content, just that you do.”

In an increasingly uncertain world, books continue to act as a comforting constant, a window into a rich world of self-improvement and education. In that sense, he says, there will always be an industry. “Books provide comfort, reassurance and inspiration. As long as we need those things, we’ll have books.”