Salt of the earth: Alwyn Vorster You can’t help but assume that Alwyn Vorster is a man who takes all challenges in his stride, whether it be decades ago doing military service and ironman triathlons, selling iron ore during the GFC, or now aiming to create the first new salt project in Australia for two decades, and one of the largest in the world.

As CEO of BCI Minerals, a Western Australian company aiming to produce salt and potash, he has applied himself to this challenge over the past two years with new focus and energy. He acknowledges that after three decades of dealing mostly with production and sales of iron ore, coal and associated minerals, exposure to the salt industry reinvigorated him and allows him to apply the full suite of his experience from management, geology, mining, shipping, marketing, project development and funding.

Ask him about salt and you’ll soon be lost in the breadth of its modern day uses. “When you think of using salt, chances are you think of shaking table salt on a plate of potato chips,” he remarks. “However, food salt is less than 10% of the global market, so there’s a lot more to it than that.

“Thousands of years ago it was used for food preservation and blocks of it were used to pay Roman soldiers. Today, it is estimated that salt has more than 14,000 uses in manufacturing items used on a daily basis by every human being on the planet. From the essential industrial manufacturing of numerous chemicals, glass, aluminium, PVC pipe, salt in medical tablets and saline IV drips, water purification, food preservation and even road de-icing, salt is the key input raw material.”

“Today, it is estimated that salt has more than 14,000 uses in manufacturing thousands of items used on a daily basis.”

BCI, headquartered in Perth, is developing the Mardie Salt and Potash Project on the Pilbara coast, about 100 kilometres south of Karratha. At Mardie, high purity salt as primary product will be produced via the solar and wind evaporation of sea water, while sulphate of potash (SOP) will be produced from the secondary processing of waste salt brines into a final fertiliser product at site. Although being done in other countries, this SOP production process will be unique in Australia.

“Steady growth in the world economy is creating organic growth in demand for salt,” Alwyn says. “Forecasts for the Asian seaborne salt market predict a supply shortage will emerge over the next decade. 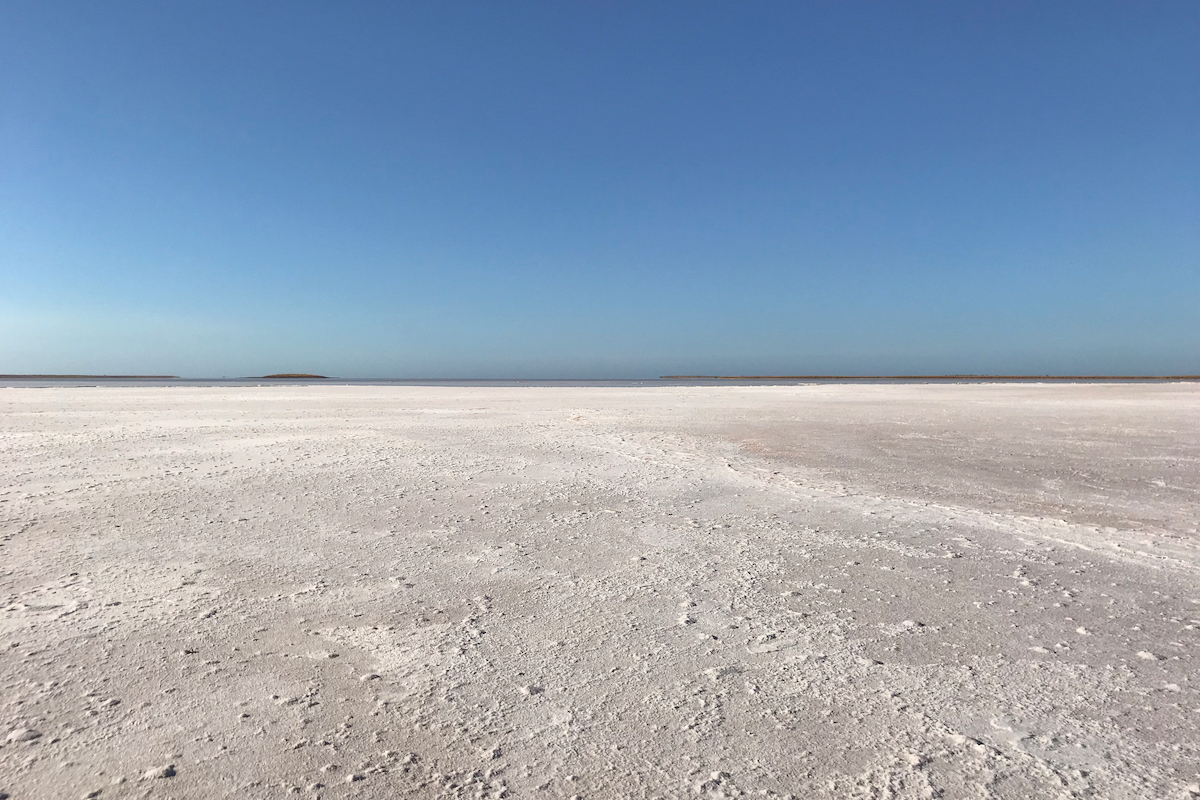 “Meanwhile, SOP, providing crucial nutrients of potassium and sulphur, is used to assist in growing better quality crops. It’s a premium fertiliser free of chloride and used mostly on high-value crops such as fruit and vegetables. Demand for SOP is driven primarily by population growth and the reduction of arable land, requiring higher crop yields.”

Alwyn describes Mardie as initially being a massive civil engineering project where nine large ponds will be constructed over an area of 100 square kilometres. Once in operation, it is more a biology and chemical process than a traditional mining operation. Inexhaustible seawater is the main resource, and 95% of energy requirements will be provided by natural sun and wind.

Alwyn emphasises that, despite the positive market outlook for salt and the excellent positioning of Mardie, a number of other ingredients are also needed to achieve success. Support from the State and Federal Governments to secure approvals, and support from existing and new shareholders to fund the project are both critical.

“Developing an evaporative salt project can take a long time, and it is therefore important for BCI to gain and maintain the support of patient shareholders over this period,” Alwyn says.

He also recognises his responsibility to ensure BCI has the right employee skill set to successfully navigate across various project phases. In the recent months, the company has appointed an experienced broader management team with a mix of project development and salt-specific experience. “This team will be instrumental in the development of BCI’s vision, and it will be important to retain an engaged and motivated core team of employees who will manage the selected contractor partners,” he says. BCI was initially founded on the Bonnie Creek iron ore deposit near Nullagine in the Pilbara in 2006, before merging in 2014 with Iron Ore Holdings (IOH) where Alwyn was managing director. “With the merger, I left the company for two years but rejoined BCI as managing director in 2016 with the mandate to diversify BCI away from iron ore,” he explains.

“At that time, BCI had just emerged from a fight for survival due to operating a single, higher cost iron ore mine, at a time when iron ore prices were declining rapidly.”

For the next two years, BCI considered options, predominantly in the industrial minerals space. In 2018, it was decided the biggest and best opportunity is on the north-west coast of Western Australia on the Mardie tenements that IOH bought in 2011 for about A$200,000.

Having completed a positive pre-feasibility optimisation study in April 2019, BCI expects to complete a definitive feasibility study and secure approvals by early 2020. Construction is targeted for the second half of 2020, and first salt sales in 2023.

About A$500 million will be required for the development of the project, which will be producing four million tonnes of salt per year and deliver around A$150 million per annum in EBITDA for the next 100 years. “With the clear vision to transform BCI over the next five years into a globally significant salt industry player, supported by solid iron ore revenue from our Iron Valley Mine, it’s quite possible for us to become at least a A$1 billion market cap company,” Alwyn says.

It is clear that Alwyn’s leadership style was shaped through numerous diverse experiences in his life. He is philosophical that each experience, even unpleasant events, should be seen as another building block towards becoming a more complete manager and potentially a good leader. 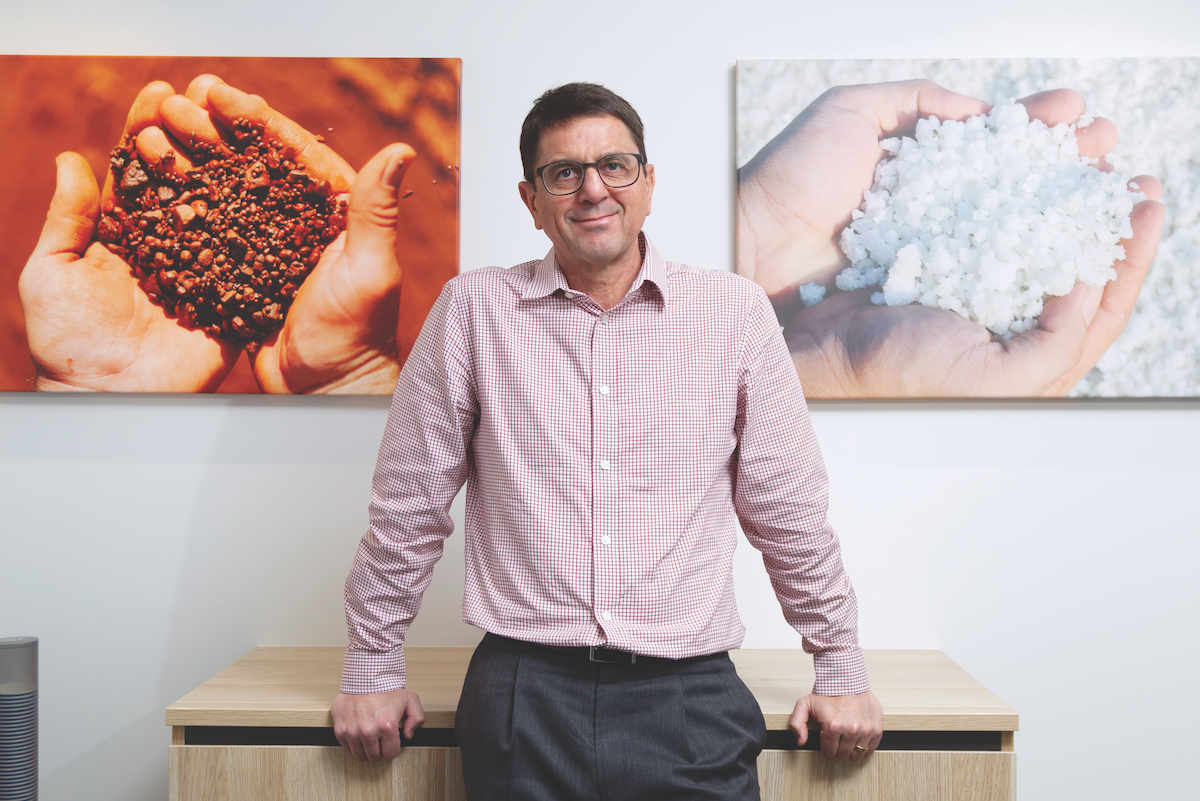 He grew up in a small country town in South Africa, and completed graduate studies in geology, mining economics and management. His first significant leadership exposure came as a young officer doing military service in the mid-1980s. “This period probably was a turning point of my carefree days and brought some focus and discipline,” he reflects.

“Sharing physical and emotional experiences with 40 people in a tent for the first-year training period brought out the best and sometimes the worst in a person. During the second year, I was platoon leader of an anti-aircraft unit on the Angolan border providing base cover to a large battle group moving north into Angola. Cuban and Russian airplanes launched regular attacks against our forces and the tension in the region was high for months. Experiences and some leadership learnings from this time will stay with me forever.”

During the mid-1990s, Alwyn was working as a mine geologist in South Africa when his employer, Kumba Iron Ore, included him in a small team heading to Australia to open a business development office. “My wife, our two-year-old daughter and I did not know a single Australian person and spoke mainly Afrikaans when we landed in Perth on a hot March day in 1996,” he remembers.

“I forced myself to work very long hours to understand the Australian business environment and to try creating a more level playing field with Australian peers. However, time has proven to me that a different culture or language barriers should not prevent anyone from achieving career progress. Importantly, I was very fortunate to have excellent managers and mentors to guide me along the way.”

One of his first projects in Australia was the Hope Downs iron project owned by Hancock Group. After a year of negotiations, Kumba formed a 50/50 joint venture with Hancock, with Alwyn part of the team finalising studies and market development.

“I basically spent 60% of my time in China, Japan and Europe visiting hundreds of companies and engaging off-take partners, and became somewhat of a China marketing expert well ahead of marketing staff in larger competing companies. Developing large mining projects requires tenacity and patience. With Hope Downs, I negotiated the first offtake memorandum in 1997, and then witnessed the first ore shipment from the mine being delivered to the same customer in Tianjin, China, a decade later.”

In 2005, after Rio Tinto bought out Kumba’s stake in the joint venture, Alwyn moved to Rio’s marketing team in its marketing hub in Singapore. “Negotiating hundreds of sales contracts and managing a 150Mtpa iron ore sales book during the GFC downturn and the following rebounce, will forever stand me in good stead in CEO roles, where so much depends on internal and external negotiations.”

Alwyn moved to IOH as CEO in 2010, charged with implementing a strategy to buy, explore and monetise mining tenements. It was his first CEO role and an important point in his career. “With my IOH appointment, there were more experienced CEO candidates on the Board shortlist, but the Board decided I was the right fit for the direction of the company, and then backed me.

“We achieved great success over the next four years, and I remain grateful for the opportunity. Although a structured recruitment process is important, applying ‘gut feel’ for appointments also has a part to play.”

Reflecting on his career, Alwyn says: “If you are prepared to learn from each experience and demonstrate a ‘can do, will do, and fit’ attitude, then career progress is likely to follow. Sometimes however, this may require patience… similar to when producing solar salt.”