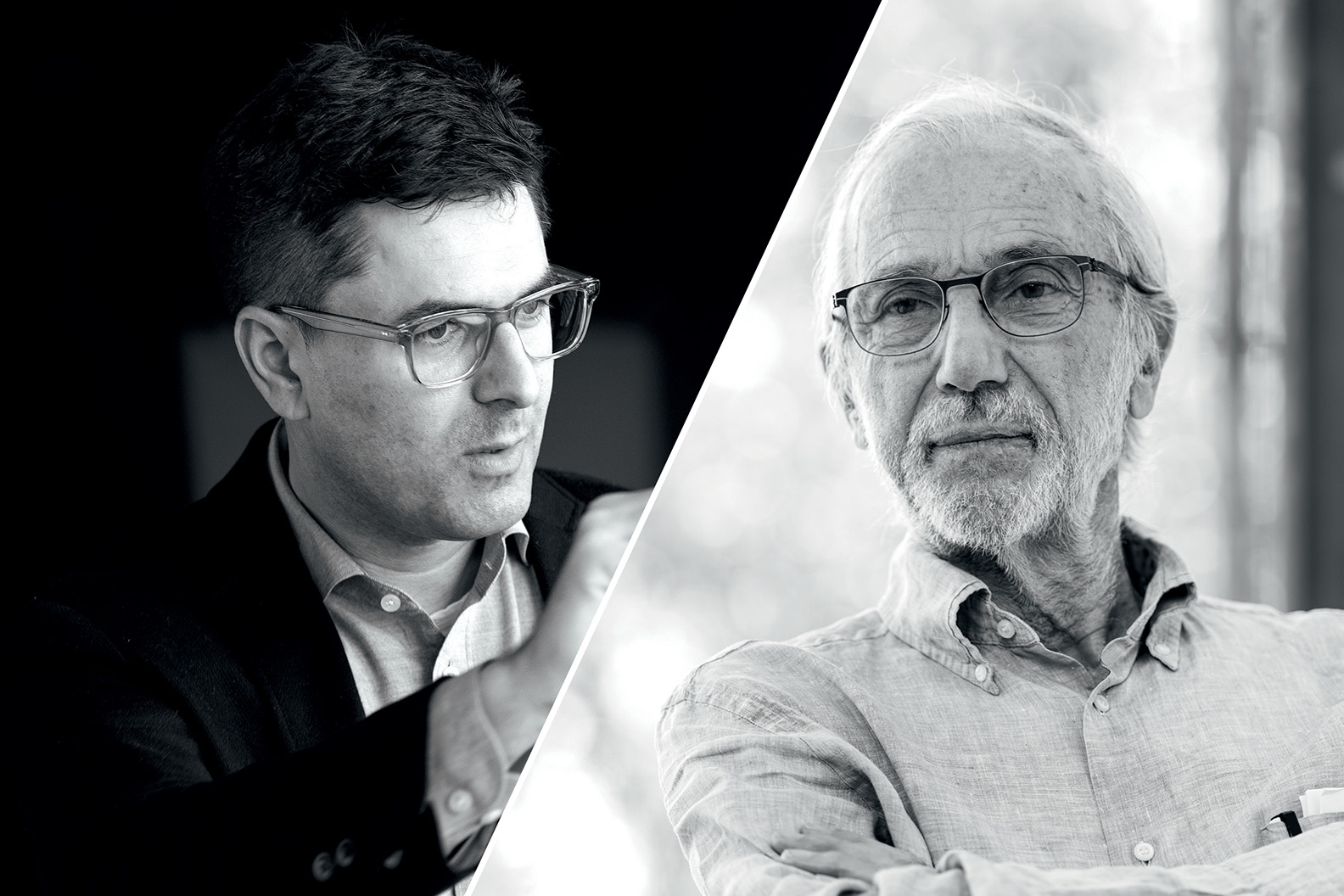 What was once an important maritime and industrial site, Sydney’s harbour foreshore playground and business hub Barangaroo has now transformed into a multi-award-winning destination of spectacular design and landscaping.

Towering over the suburb’s new promenade is Lendlease’s high-rise residential development One Sydney Harbour, which will sit next to iconic renewal projects International Towers Sydney and Crown Sydney. The cherry on top of One Sydney Harbour will be two Skyhomes, Australia’s most expensive residences.

The penthouses span one floor each at 540–670 square metres and feature three-metre high ceilings and access via a private lift. Both residences have a rooftop terrace ranging from 80–110 square metres, complete with a swimming pool and boasting panoramic views from the Harbour Bridge and Opera House to the Blue Mountains.

The penthouses capture the essence of living high above Sydney harbour.

Behind the project are two of the most brilliant minds in design: internationally acclaimed and Pritzker-winning architect Renzo Piano and leading interior designer Daniel Goldberg, Founder and Creative Director of State of Craft.

Renzo and Daniel previously worked together on The Shard and Shard Place in London, making One Sydney Harbour their third collaboration. “The penthouses capture the essence of living high above Sydney Harbour,” Daniel says. 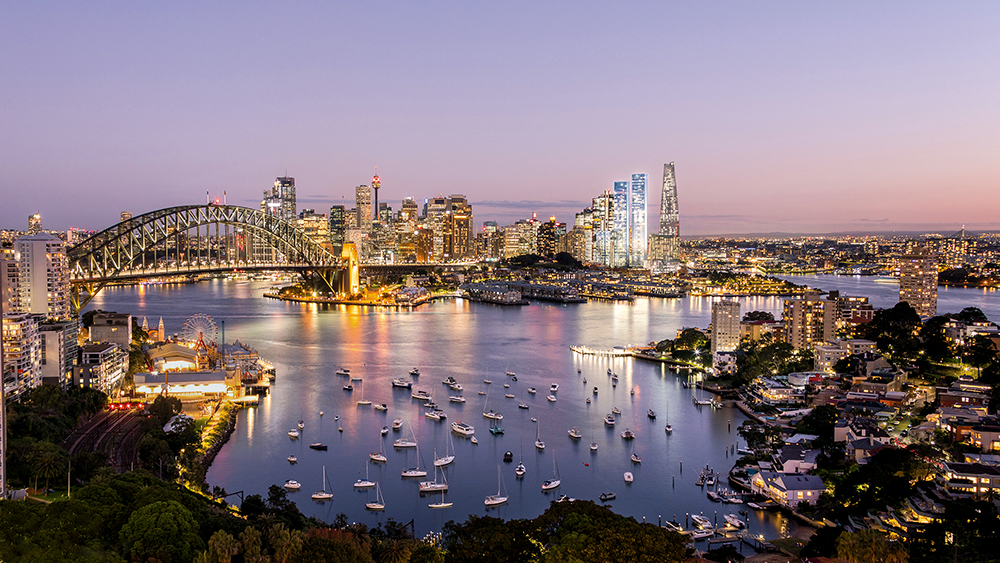 “The experience of being in the Skyhomes was inspired by life aboard private yachts, with their seamless transition from inside to outside spaces and the feeling of freedom and elegant comfort.” The residences are undeniably impressive, but Daniel says their luxury is not to be confused with opulence and that they prize craftsmanship above all else.

“Our approach to luxury is very much about craftsmanship, telling the story of curation, a sense of authenticity,” he explains. “We wanted the interiors to be timeless, sophisticated and smart. Craftsmanship and attention to detail are what sets these apartments apart.” 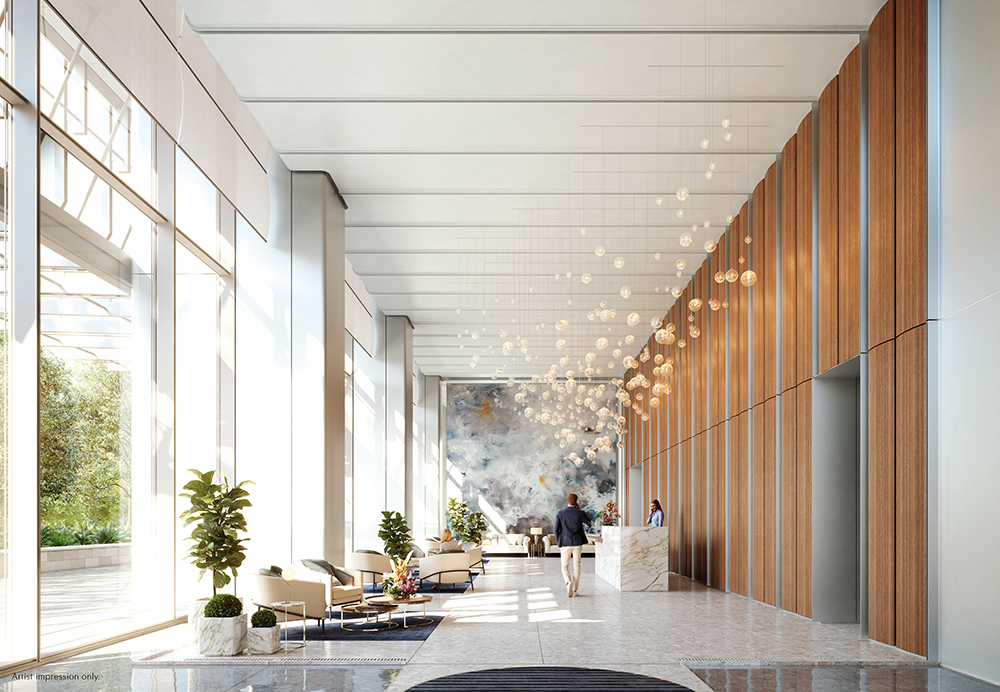 Each finish is carefully chosen for its distinct pattern and form, providing an elevated design experience in every apartment. Applying a delicate and refined approach to design, Renzo Piano and State of Craft have perfectly captured the essence of luxury living and, in turn, a new landmark for the Sydney skyline.

“This place will be unique for the very simple reason that you live in the air, you live in the light, almost like in suspension, in between the water and the sky,” Renzo describes. The interiors’ stand-out feature is their ethereal quality and response to Sydney’s natural surroundings and light. “All places have a story to tell; you just have to listen to that, and I think Sydney has a great story to tell,” Renzo notes. “We immediately started to think about these buildings being like crystals, playing one to the other. In this case, I think it’s very much about this; about making something that tells the essence of this city that is about a sense of lightness, a sense of light, the sense of transparency.”

Daniel and his team at State of Craft tackle every project uniquely by designing spaces that respond to the local context and culture, referencing traditions and vernacular elements to root every project in its place. Daniel was born in Freiburg, Germany. After qualifying as an architect, he moved to London to join Foster + Partners, where he worked on several large cultural projects, including the British Museum’s Great Court. He has worked as Creative Director at some of London’s most prestigious design companies in the superyacht and international hospitality industries, and high-end residential spaces, including One Hyde Park. Since founding State of Craft in 2012, he has worked with the world’s leading architects on interior design for some of the most ambitious property developments of the past decade.

“For us, luxury is in the beauty of nature and displaying the grain in the timber, the veining of the marble or granite,” he describes. “I think a lot of it is about responding to the site, making it specific to the climate, the context and the architecture.”

From the unique hue of hand-cut stone to the patina of timber that diffuses warmth through space, Daniel chose each material with precision and care to create an environment of elegance and sophistication. Furthermore, the apartment will be curated to the owner’s taste. 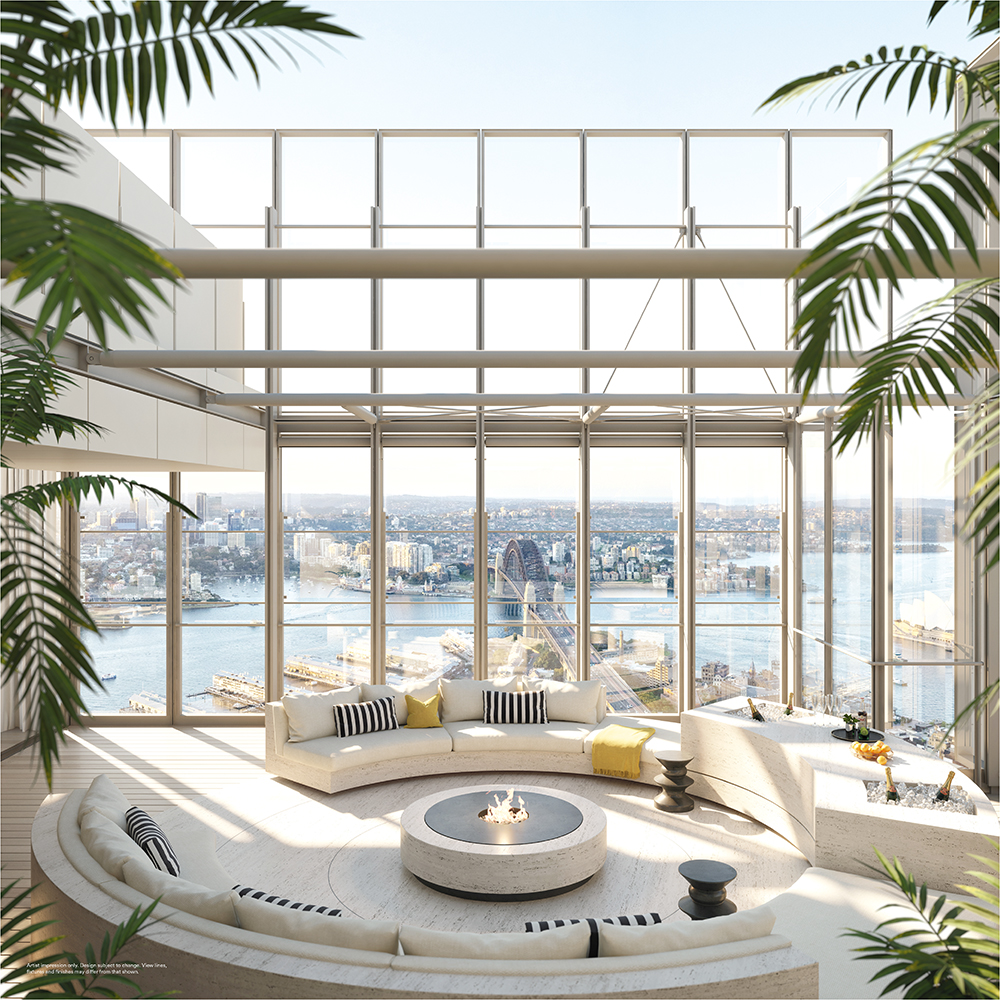 Residents will also enjoy the proximity to Sydney’s finest cultural offerings, a testament to Lendlease’s commitment to the suburb that they developed and the precinct’s growing community. More than 1,400 workers are involved in Lendlease’s project, with the first tower set for completion in 2023 and the overall project expected to finish in 2024.

Boasting a history spanning more than 60 years, Lendlease has created some of the world’s most iconic landmarks and established itself as a leading global integrated real estate and investments group. 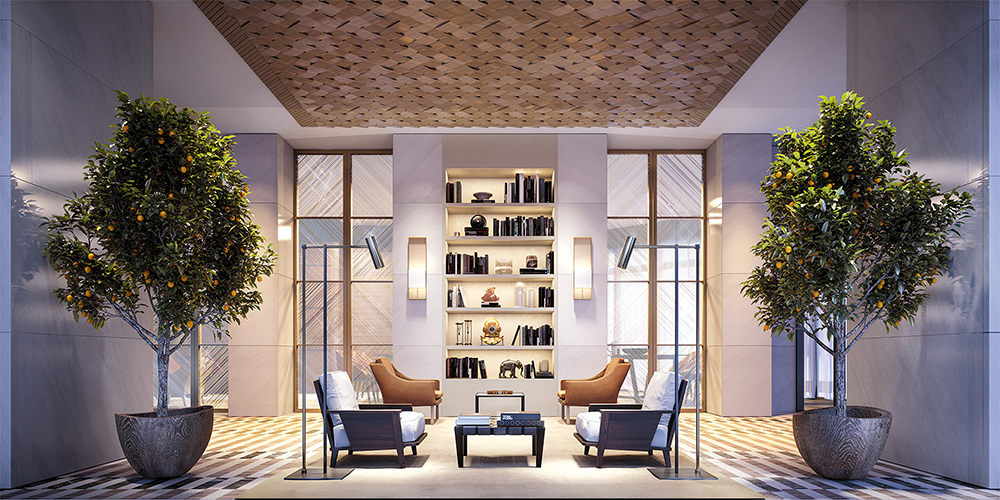 With a development portfolio that spans the Americas, Europe, Asia and Australia, including projects like Sydney Opera House and Aurora Place and the 9/11 Memorial & Museum in New York, Lendlease has become synonymous with quality and delivery.

At One Sydney Harbour, Lendlease is committed to delivering on its promises and creating an address that residents will be proud to call home. The company won the bid to develop the Barangaroo South site in 2009, with the NSW Government, and a design excellence competition was held for the site with some of the world’s best architects.

“Renzo Piano Building Workshop’s vision of creating three crystal-like buildings with a gentle presence in the cityscape, and in dialogue with the harbour waters, stood out as the perfect response to the site and surrounds,” says Lendlease’s Head of Residential, Ben Christie. “The design collaboration between Renzo Piano and Daniel Goldberg continues to bring Lendlease’s vision for One Sydney Harbour to life, setting the tone for this landmark residential offering. Following the record-breaking Residences One penthouse sale, we are now showcasing the Residences Two skyhomes, which pay homage to Goldberg’s design expertise and luxury living vision.”

Ben has more than 25 years’ experience in the property development industry and has worked with Lendlease since 2007. His expertise has been instrumental in driving the growth and expansion of the company’s urban renewal strategy by ensuring a committed customer and marketingled approach. One Sydney Harbour, in particular, sets the benchmark in luxury residential developments from design, innovation and sustainability perspectives.

“This is a significant project for our business as it represents the final piece of our involvement in Barangaroo South and will create a legacy place for Sydney,” Ben says. The development will feature one of Australia’s most advanced residential facade systems and will benefit from the precinct sustainability infrastructure constructed in Barangaroo South. Renzo is one of the world’s most distinguished architects. The Pritzker-winner is responsible for some of the most iconic buildings around the globe. His studio, the Renzo Piano Building Workshop, was founded in 1981, with offices in Paris, Genoa and New York. The firm is well known for pushing the limits of building technology while using traditional materials and craftsmanship to produce iconic architecture. Significant projects include landmark buildings such as The Shard in London, The Pompidou Centre in Paris and The New York Times Building in New York.

“The primary facade of these buildings is designed as an ‘Open Cavity Facade’ system comprised of multiple layers of glass with an internal automatic blind,” Ben explains. “This system adds depth and complexity to the appearance while maximising natural ventilation and the impressive harbour view.

“Barangaroo South is already classified as carbon neutral, is on track to creating zero waste emissions and contributes to community wellbeing – the towers have received a 6 Star Green Star rating for office design. The Barangaroo South precinct, developed and constructed by Lendlease, is the first precinct in Australia to be certified carbon neutral. Barangaroo is one of only 18 projects globally to be part of the C40 cities’ Climate Positive Development Program.”

All places have a story to tell; you just have to listen to that.

Of course, every build has its challenges, and the intricate vision for One Sydney Harbour is exceptional. “It is an incredible development – it’s innovative, with a focus on exceptional design and sustainability, with market-first features for Australia adding to the project’s complexity,” Ben says.

“Our biggest challenge is to deliver on this vision, for which we are drawing on our global development capabilities and the company’s 60-plus years of experience. The stand-out feature to Ben is One Sydney Harbour’s amenity offering. “It’s second to none in Australia,” he says.

It will employ a 24-hour concierge in each tower to oversee these amenities and be available to assist residents at any time. Lendlease’s purpose is “to create value where communities thrive”, which is exactly what it is delivering at Barangaroo South – Australia’s first carbon-neutral precinct.

“Our strategy for the next decade is to employ our placemaking expertise and integrated business model in global gateway cities – like Sydney – to deliver urbanisation projects and investments that generate social, environmental and economic value. Barangaroo South speaks for itself on all these fronts, with One Sydney Harbour the final piece of this world-class, sustainable place to live, work and socialise.