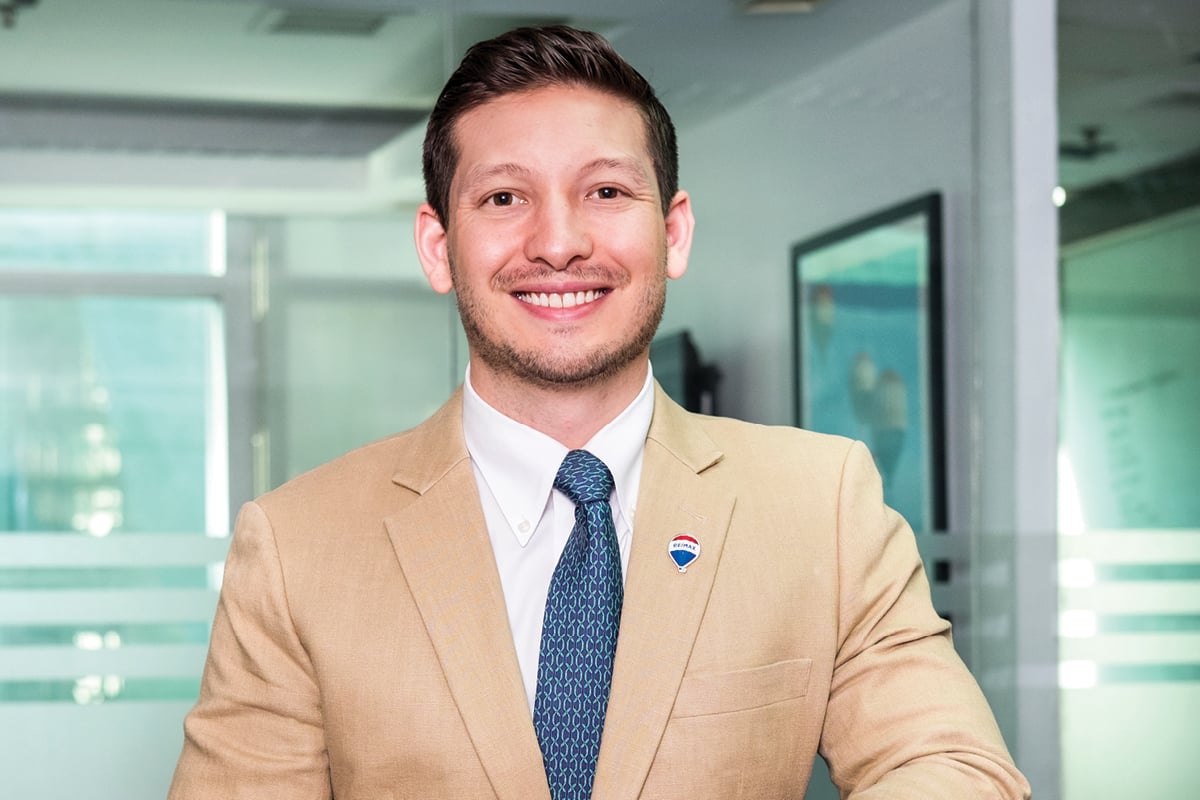 Kenneth Stern finds it difficult to pick just one achievement he considers his greatest – his status of soon-to-be-father, or his years with the Philippines’ rugby team (he played in 2013’s World Cup), are two he cites. But professionally, it’s a pretty clear choice – when he became Country Manager of RE/MAX Philippines at the age of 27.

It’s a young age for such a huge step in one’s career, especially when it’s a position overseeing the national operations of such a major real estate franchise. “When I became Country Manager of RE/MAX there was some apprehension about having a young professional take on such a big responsibility,” Kenneth recalls.

“But I knew I could do it, and I was lucky enough to have bosses who believed in me and gave me a chance. Three years later, the company has grown to almost 30 franchises, from about 14 when I took it over. To put things in perspective, this year RE/MAX Philippines took home the award for second place in franchise sales for the Asia-Pacific region. Age doesn’t matter if you have stellar work ethic, a clear vision and a great team behind you that can help you achieve it.”

As impressive as that growth has been, Kenneth thinks RE/MAX can do even better, with plans to build up to 100 franchisees in the next few years by sticking to its guns. He credits his time in sport with providing this razor-sharp focus on sticking with what works and adjusting quickly when improvements can be made.

“I just kept focused on our vision of professionalising how real estate transactions are conducted in the country, as well as helping people build a business they can be proud of and pass on to next generations,” he says. “While we’ve had to adjust strategy and tactics along the way to better target prospects, we’ve never gone off track from our vision.”

The Philippines’ real estate industry is still a developing one, rich with opportunity. Property prices have hit a record high, driven by residential demand outstripping supply. At the same time, it remains a more attractive market than most other Asian markets, with prices vastly cheaper than Hong Kong or Singapore.

As areas outside of Metro Manila continue to see infrastructural investment increase, the property market is booming. RE/MAX now has offices in Cebu, Iloilo, Palawan and other islands; that vision of 100 offices across the Philippines certainly looks viable.

One challenge in the Filipino market, however, is a lack of transparency and openness; there’s no multiple listing system (MLS), where all data would be publicly available to brokers. There’s limited access and every deal is different.

More work must be done, therefore, to ensure that RE/MAX embodies integrity and honesty, but Kenneth has a firm grasp on the necessary strategy. “It takes a special person to invest in a RE/MAX franchise – someone with vision, the willingness to do things differently and better, and a desire to create a legacy. They also need to be willing to empower their agents to change the industry,” he asserts.

“It takes a special person to invest in a RE/MAX franchise – someone with vision … and a desire to create a legacy. ”

“My job is to identify these people and, once they decide to join the RE/MAX team, help them grow their business. What we’re trying to do is to create a company culture where everybody wins.” 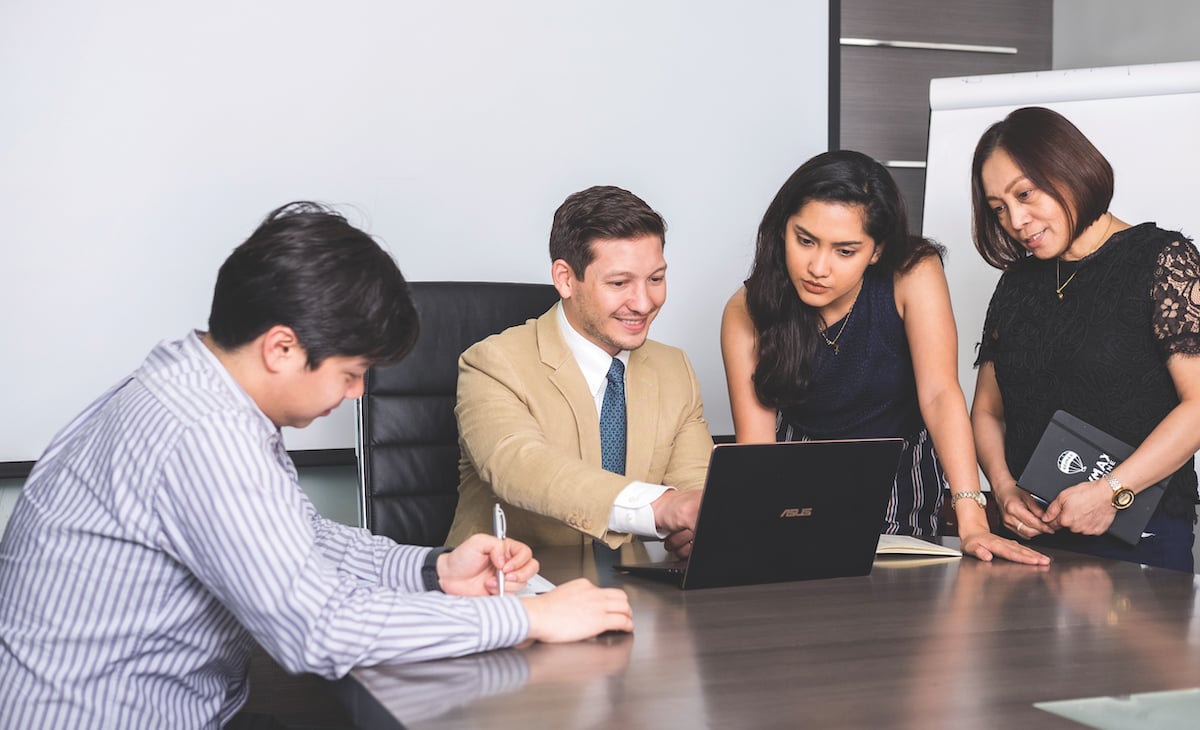 Despite the still-developing nature of the industry in the Philippines, Kenneth is clearly proud of how successful local brokers have been. Nine thus far have earned more than US$1 million since joining the company, while two last year were recognised for earning that much in a single year. One of the most interesting titbits Kenneth shares is that a RE/MAX agent earns on average US$62,000 annually in commission, compared to the average Filipino CEO, who earns US$52,000 a year.

Perhaps this is down to RE/MAX’s unique offering within the real estate market, compared to the dominant conglomerates that own a considerable amount of the market. Many who intend to join the industry think they have to join these large companies, but RE/MAX offers a totally different environment – entrepreneurial but with a globally recognised brand name as a franchise, it employs the services of passionate local entrepreneurs.

“We centralise data and use technology to connect people. Everything’s economy of scale. We have a train-the-trainer approach – we train the top-level management and they can go and train their agents and staff. We don’t actually need to be in every office all day, every day. We give them the system and tools they need to be successful and they’ll go out and implement it. That’s the way that you get a high level of service for your clients under a branded procedure and system.”

At the same time, Kenneth acknowledges that the company’s structure initially provided a challenge – when he started, there were far fewer RE/MAX outlets in the Philippines, and it was a little trickier to establish a company culture.

“If you just have a couple offices that do well, it’s not a successful franchise. You need everyone doing well.”

“Selling a franchise is only the first step,” he explains. “The next is to help the owners establish a business plan and get them to buy into the unified culture that we aim to create in RE/MAX – a culture of collaboration and transparency that uplifts every RE/MAX team member.”

The result is a company that empowers independent workers with globally scaled information and technology, and one of the key ideas behind the company’s success is flexibility. “RE/MAX is really pioneering the next phase of transparency and professionalism in the Philippine real estate industry,” he states.

“As a pioneer, we have the freedom to do things differently – especially since there is very little competition in the market. What we offer is new and exciting, and the company has unlimited potential to grow. 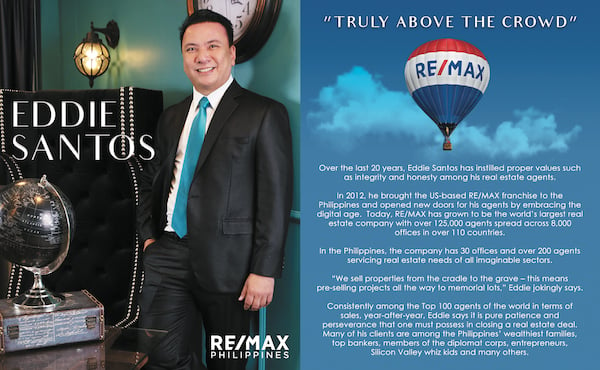